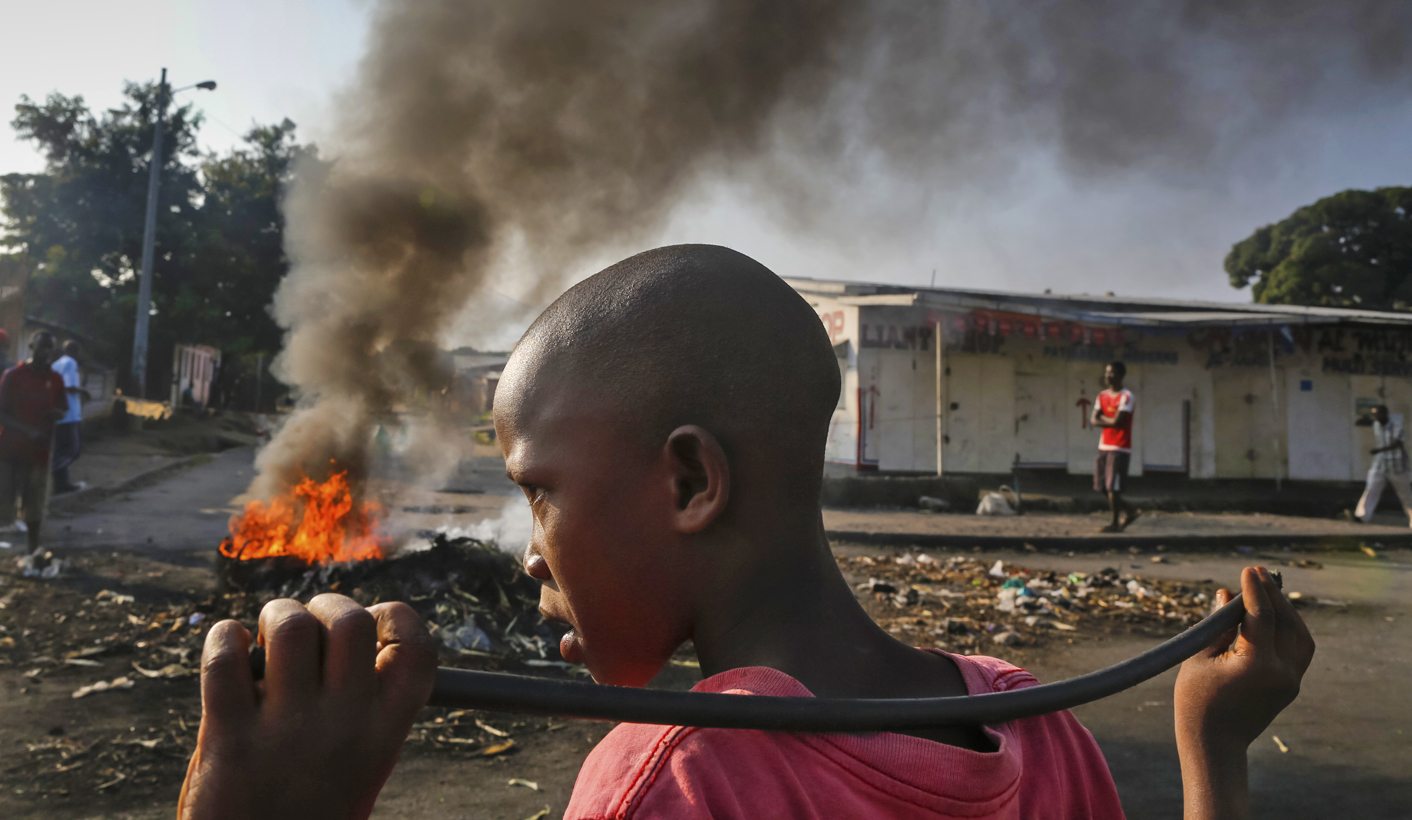 The deteriorating situation in Burundi is a perfect storm of much that undermines stability in Africa today: presidents seeking impunity and power through dubious new terms, authoritarian regimes muzzling opposition and independent media, regional rivalries stalemating efforts to bring peace and outside powers unwilling or unable to act. By Jean-Marie Guéhenno, Ayo Obe and Fola Adeola for the INTERNATIONAL CRISIS GROUP.

If Africa’s problems need African solutions, as we truly believe, this is the time for the African Union (AU) to step up and prove its worth. We welcome the AU’s strong statements so far on Burundi, but it needs to go much further, by insisting its observers deploy throughout the country and preparing for a robust peace implementation mission that can forestall atrocities, incipient civil war and a possible intervention from neighbouring Rwanda.

Any peace operation should not be launched into the current domestic political vacuum. The AU needs to find ways for the Burundian government and opposition to resume direct engagement; such an effort could start with an urgent joint AU/East African Community meeting in Kampala.

There can be no overstating the urgency of action in a country where murderous ethno-political divisions are stirring again. Bodies are found in the streets of ‘treacherous’ districts every morning, the opposition has been forced into exile, the government is in complete denial, 200,000 refugees have already fled the country over the last eight months and hate speech from top officials is chillingly reminiscent of that used ahead of the 1994 Rwandan genocide.

Africa has a huge stake in stopping a further degradation of Burundi’s crisis. For two decades it has built up its investment in peace in the country, including through four years of negotiations from 1996 to 2000 that led to the Arusha peace agreement, and six years from 2000 to 2006 needed to incorporate and demobilize armed groups that were not at the Arusha negotiations.

The outside world, shocked by Rwanda’s 1994 atrocities, certainly helped make Arusha stick. But Burundi’s internal peace was part of legacy of conflict-resolving leadership by two of Africa’s most important presidents, the late Julius Nyerere of Tanzania and Nelson Mandela of South Africa. At the start of the new century, Burundi was also the AU’s symbolic first peace intervention mission.

This time, however, African leaders and the international community have willfully ignored warning signs for at least three years. These signs have been clear since political repression began to rise after the 2010 elections that gave President Pierre Nkurunziza his second term.

Burundi’s ruling party never genuinely adhered to the Arusha principles. In some cases it even blocked their implementation, as it did with provisions for justice, meaning that nobody ever answered for the crimes of the previous long-running civil war. The quest for impunity is one of the drivers of Nkurunziza’s will to stay in power

The lack of long-term political engagement and support for Burundi meant that some sponsors of the Arusha agreement never followed up on their commitments. For instance, the Burundi government was allowed to undermine the UN mission to the country, demanding the departure of two special representatives of the Secretary-General. The Security Council did not push back hard enough.

Nkurunziza’s bulldozing through a third term in office in June is also being emulated in Congo-Brazzaville, Rwanda and the Democratic Republic of Congo. This is not just about respect for the rule of law. Attempts to monopolise power deepen political tensions and could trigger violent crises. .

The East African Community, to which Burundi should theoretically first look for help in preventing its domestic conflicts, is now too divided to act. Some of its leaders are also seeking to prolong their tenure in office. Further abroad, South Africa, which once played a key role in peace in Burundi, has long lost its former role as the continent’s peacemaker. It was further compromised by its decision to send a minister to attend Nkurunziza’s third term swearing-in ceremony – the only country to do so.

The region may soon be sucked in further. UN agencies are preparing for refugees streaming in increasing numbers across the borders of Tanzania, Democratic Republic of Congo and Rwanda. Rwandan President Paul Kagame is accusing Burundi’s leaders of “massacres”, potentially a worrying precursor of unilateral intervention.

The International Crisis Group, of which we are the President and board members, has warned of the risks in leaving the work of Arusha peacebuilding unfinished in five reports since 2012. Yet international actors woke up only at the start of 2015, by which time the government had already set the scene for the presidential election.

The UN Security Council or other outside powers can still help. This could include raising pressure with the threat of targeted sanctions, suspension of budget support and reviewing Burundi’s future involvement in UN peace-keeping operations, which have proved so lucrative for the regime.

However, absent a real African consensus, there are limits to what the outside world can do. The time for Africa to show it can act is now, and it should do so through the AU, the mechanism it set up to defuse exactly this kind of explosive emergency. DM

Jean-Marie Guéhenno, Ayo Obe, and Fola Adeola are respectively the President & CEO, Vice-Chair of the Board of Trustees and board member of International Crisis Group, the international conflict prevention organization.

Photo: A Burundian boy looks on as he holds a stick in front of a burning barricade during an anti-government demonstration against President Pierre Nkurunziza in Cibitoke neighborhood of Bujumbura, Burundi, 29 May 2015. EPA/DAI KUROKAWA.