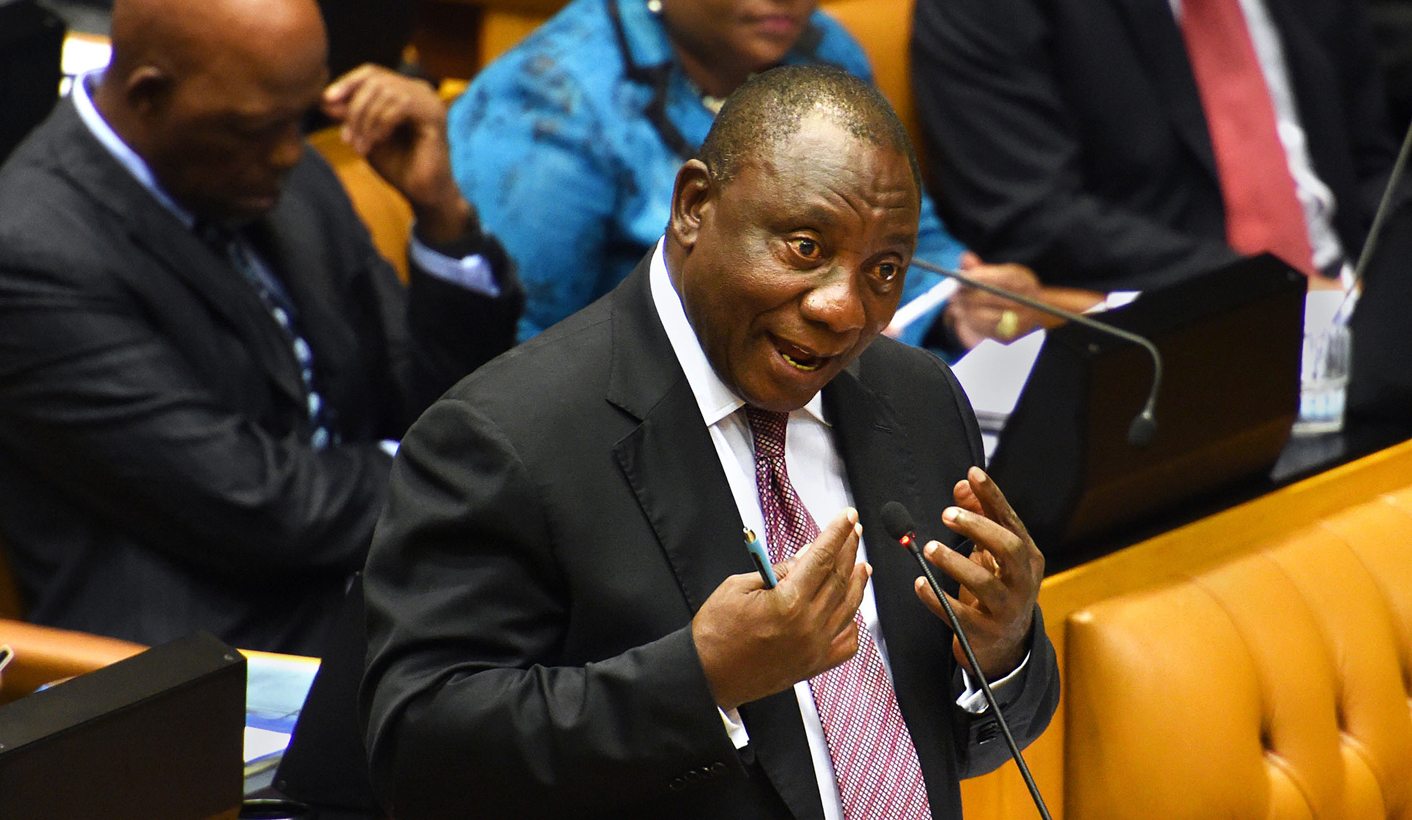 On Thursday, the strike by Parliament’s workers showed no sign of reaching a settlement, with Parliament Secretary, Gengezi Mdiglana’s status as the number one villain of the workers being entrenched. The business of Parliament proceeded as normal, however. Government wants you to honk if you hate women abuse, while Deputy President Cyril Ramaphosa confirmed that he is being personally sued over Marikana. By REBECCA DAVIS.

Parliament’s management flexed its muscles against striking workers on Thursday, with workers being met with signs all over the Parliamentary precinct warning that they were in contravention of an interdict by continuing to protest for the restructuring of annual performance bonuses.

This follows the approach by Parliament officials to the Labour Court to obtain an interim court order declaring the strike unlawful. The workers are technically in contravention of the Labour Relations Act, since they are one of a small group of South African workers, including police and some health workers, who are not allowed to strike on the grounds that their services are classed as “essential”. But the interdict showed no signs of dousing the fervor of the protesters. If anything, in fact, it seemed to add fuel to the flames. Additional firepower was also evident in the arrival of the National Education, Health and Allied Workers Union’ (Nehawu) national top brass including, Mzwandile Makwaeba.

Nehwau’s Parliament chair, Sthembiso Tembe, once again called for the removal of Parliament Secretary, Gengezi Mgidlana, who is increasingly becoming the major target of workers’ ire. Press conferences Mgidlana has been giving daily, condemning the workers, are doing nothing to ease the stand-off. Workers expressed the belief that the media was parroting the line of Parliament’s management, rather than reflecting the workers’ plight. Despite the anger, Thursday did not see a repeat of Wednesday’s scenes in the Parliamentary precinct, where riot police deployed stun grenades against the workers. The afternoon sitting of the National Assembly was also allowed to proceed without interruption from protesters. The launch of the 16 Days of Activism campaign is one of two occasions annually where politicians come together to deliver stern condemnations of gender-based violence. The first, of course, is Women’s Day.

On this occasion, ANC Women’s League head, and Social Development Minister, Bathabile Dlamini, was nowhere to be seen, prompting condemnation from opposition parties about her level of commitment to the debate. Minister of Women in the Presidency, Susan Shabangu, was on hand, however, to sing the praises of the “Count Me In: Together Moving a Non-Violent South Africa” campaign. Shabangu warned that the country needed to “move away from just messages” on the topic of gender-based violence, but there was very little other than messages on offer on Thursday.

While detailing some of government’s achievements in combating violence against women over the past while – such as the establishment of the gender-based command centre in March 2014 – Shabangu also admitted that government had been unable to see some of its plans through due to resource issues. Last year, Shabangu said, the government had made a commitment to hold “engagements” on the topic. The commitment could not be met.

Gender activists will be encouraged to hear, however, that Shabangu affirmed the need for police crime statistics to include domestic violence as a separate category to common assault. This is something many have been demanding for years, as the current presentation of the crime statistics makes it impossible to tell what domestic violence rates are actually like in South Africa. Minister Shabangu also had a message for the country.

“On Thursday next week, November 19, we call on all South Africans to switch on their hazard lights, blow whistles and hoot for at least five minutes between 7.30am and 8.00am just to register their concern – especially men who say ‘not in my name’.”

Shabangu said that she hoped this would produce a “cacophony of sounds of South Africans joining forces to say ‘Enough is enough!’”

Her ideas failed to win much praise from opposition Members of Parliament. The Democratic Alliance’s (DA) Shadow Women’s Minister, Denise Robinson, condemned the recent march held by the ANC Women’s League in defence of President Jacob Zuma as “absurd”, and accused the President of having “sexist, patriarchal attitudes”.

The Inkatha Freedom Party (IFP) shared similar sentiments, saying that the absence of Bathabile Dlamini from the debate was further proof that: “The ANC comes first, the women of South Africa come second!”

The ANC parliamentary caucus rejoiced every time the issue of maintenance defaulters arose, because it allowed MPs to make reference to the fact that Economic Freedom Fighter (EFF) MP, Floyd Shivambu, has fathered a child, and allegedly dodged paying maintenance.

The DA’s Zak Mbhele got in the snappiest line on the subject. “If you can’t stand the heat,” he told maintenance-defaulting MPs, “stop making buns in the oven!”

A lacklustre debate, at the best of times, reached its nadir when Agang MP, Andries Tlouamma, advised women to stop stealing other women’s men, to hoots of hilarity from MPs.

Deputy President Cyril Ramaphosa was in the hotseat in the National Assembly later in the afternoon when the issue of Marikana was raised, as it invariably is when the deputy president fields questions from MPs. Asked by DA leader, Mmusi Maimane, what progress was being made in compensating victims of the Marikana massacre, Ramaphosa responded that “preparations for the establishment of an alternative dispute resolution process are currently ongoing”.

The DA was unhappy with this response, since President Jacob Zuma committed in September to resolution of the compensation matter being “swift”. Maimane has now called on President Jacob Zuma to address the matter when he appears in the National Assembly to answer questions next week. But Marikana victims are not simply sitting back. The Deputy President informed the National Assembly that the reason he could not be involved in the compensation process was because he had been served with a summons in his personal capacity. Ramaphosa’s office subsequently put out a statement confirming that a summons had been served, but also sought to underline the fact that the Farlam Commission had exonerated Ramaphosa. That may be so, but it is clear that Marikana remains Ramaphosa’s political albatross. DM