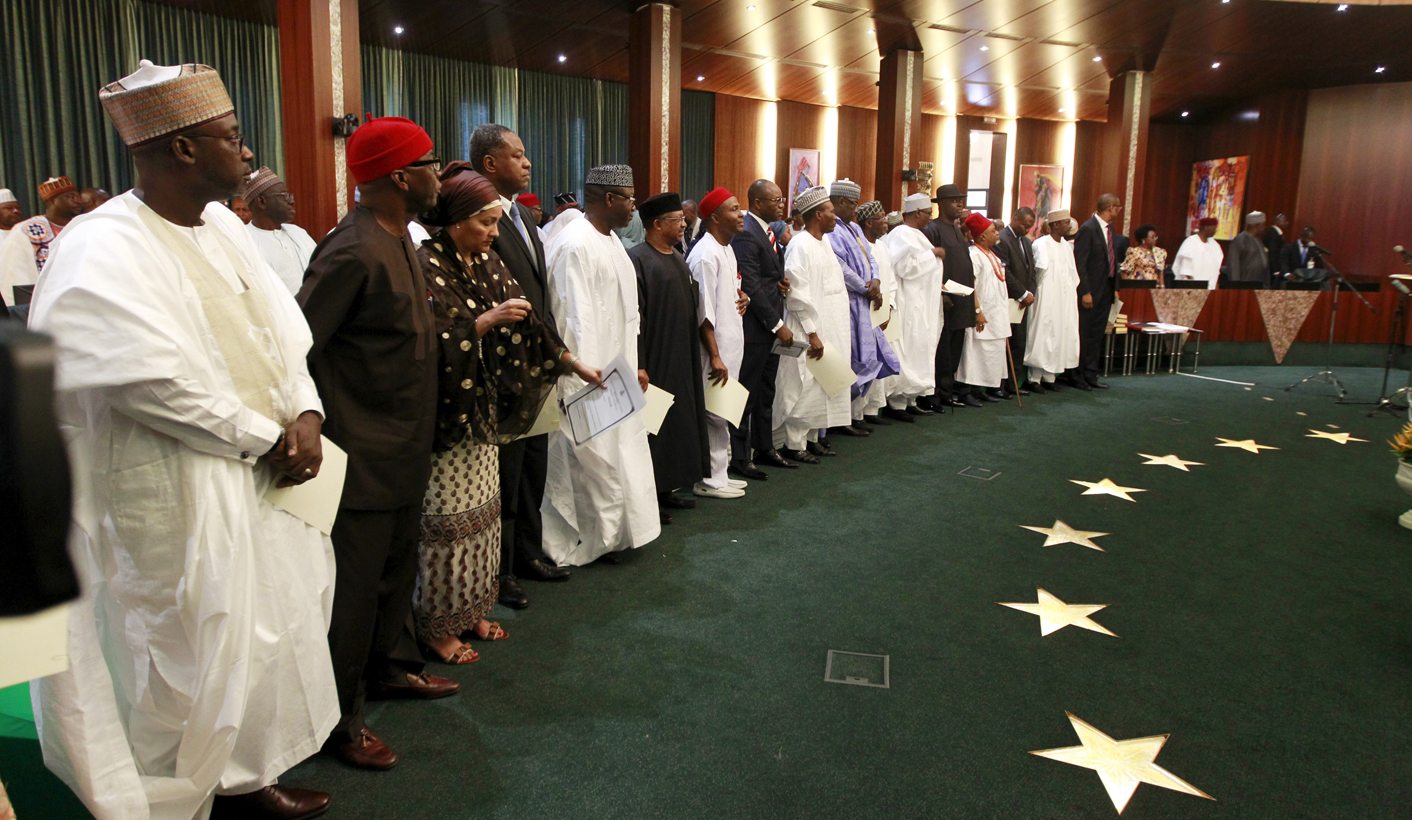 After keeping the nation waiting for five months, President Muhammadu Buhari has finally unveiled his new, slimline cabinet. In control of Africa’s most populous country, and its largest economy, these men and women will determine Nigeria’s future, and their success will be Africa’s too. SIMON ALLISON picks out the key names.

Choosing a cabinet in Nigeria is a complicated balancing act. The president – this time round, it is newly-elected Muhammadu Buhari – must juggle the need for skilled leaders with the need to repay political allies, and those are rarely the same people. He must navigate the shifting alliances of internal party politics, while restructuring poorly-performing ministries and eliminating deadwood altogether. He must carefully maintain an ethnic and religious balance, and he must make sure each of the country’s 36 states is somehow represented.

No wonder it took Buhari nearly six months to make his decision. “Impatience is not a virtue,” said the president to his critics, who thought that the long delay in naming a new government was bad for business. Buhari was unmoved: “Careful and deliberate decisions after consultations get far better results,” he said.

Finally, on Wednesday, Buhari unveiled the results of his lengthy deliberations, swearing in 36 ministers at a ceremony in the capital Abuja. All 36, he said, are “round pegs in round holes” – but not all 36 will get their own ministries. To underscore his commitment to streamline government and reduce inefficiency, Buhari got rid of eight ministries entirely, meaning that eight of the new crop of ministers are effectively deputy ministers.

So, who made the cut? The most notable name is that of Buhari himself. The President has taken charge of the ministry of petroleum, which for years has been associated with gross mismanagement and corruption on a grand scale. That Nigeria, Africa’s largest oil producer, must import refined petroleum is as a result of the failures of this ministry, which has resisted all attempts at meaningful reform over the years. Buhari has now gambled his reputation on succeeding where others have failed. If he can turn the petroleum ministry around, he will have gone a long way towards fulfilling his election promises. Helping him is junior minister, Ibe Kachikwu, who is current head of the state-run Nigerian National Petroleum Corporation.

The influential finance portfolio has been handed to Kemi Adeosun, a former investment bank chief who has a daunting task ahead of her. Collapsing oil prices have slashed the government’s revenue, and stunted economic growth, with analysts predicting more turbulent times ahead. Can she find a way to turn the economy around, or at least mitigate the effects of the predicted recession? To do so, she will have to work closely with the new minister of trade and investment, Okechukwu Enelamah, head of the private equity company African Capital Alliance. The first thing on Enelamah’s to do list is to sort out the almighty mess caused the massive $5.2 billion fine handed to MTN Nigeria, which looks certain to deter serious foreign investment.

Alongside the economy, the other major crisis facing Buhari’s new administration is the security situation; particularly, the fight against Islamist militant group Boko Haram. It is no surprise that Buhari, a military man himself, chose a retired brigadier-general as defence minister. The appointment of Dan Ali might rile a few feathers in Nigeria’s powerful military, however. Earlier this year, Ali infuriated then-army boss, Alex Badeh, by criticising the army’s counter-terrorism measures. Badeh accused Ali of “making inflammatory statements that are likely to undermine morale in the armed forces of Nigeria and jeopardize ongoing military operations”. Badeh has since been replaced, and the Nigerian army’s poor record against Boko Haram suggest that Dan may have had a point.

Another minister to watch is Babatunde Fashola, who heads the new power, works and housing ministry. His job is to maintain and overhaul the country’s creaking infrastructure, an impossible task for most people. But Fashola has a track record: as governor of Lagos, Africa’s largest city, until May this year, Fashola is credited with huge improvements in public transport, roads, affordable housing and security. Can he do the same on a national level?

Although it remains to be tested, Buhari’s first cabinet is a positive statement of intent from the new prime minister, and a sign that he is, at the very least, paying lip service to the promises he made in his victorious electoral campaign. He needs them to succeed, and so does Nigeria. This may be Africa’s largest economy, but it has still got a very long way to go in terms of delivering effective political and socio-economic rights to its citizens. Africa, too, will be watching closely, and hoping for the best, knowing that a booming, successful Nigeria is key to the future of the continent as a whole. DM