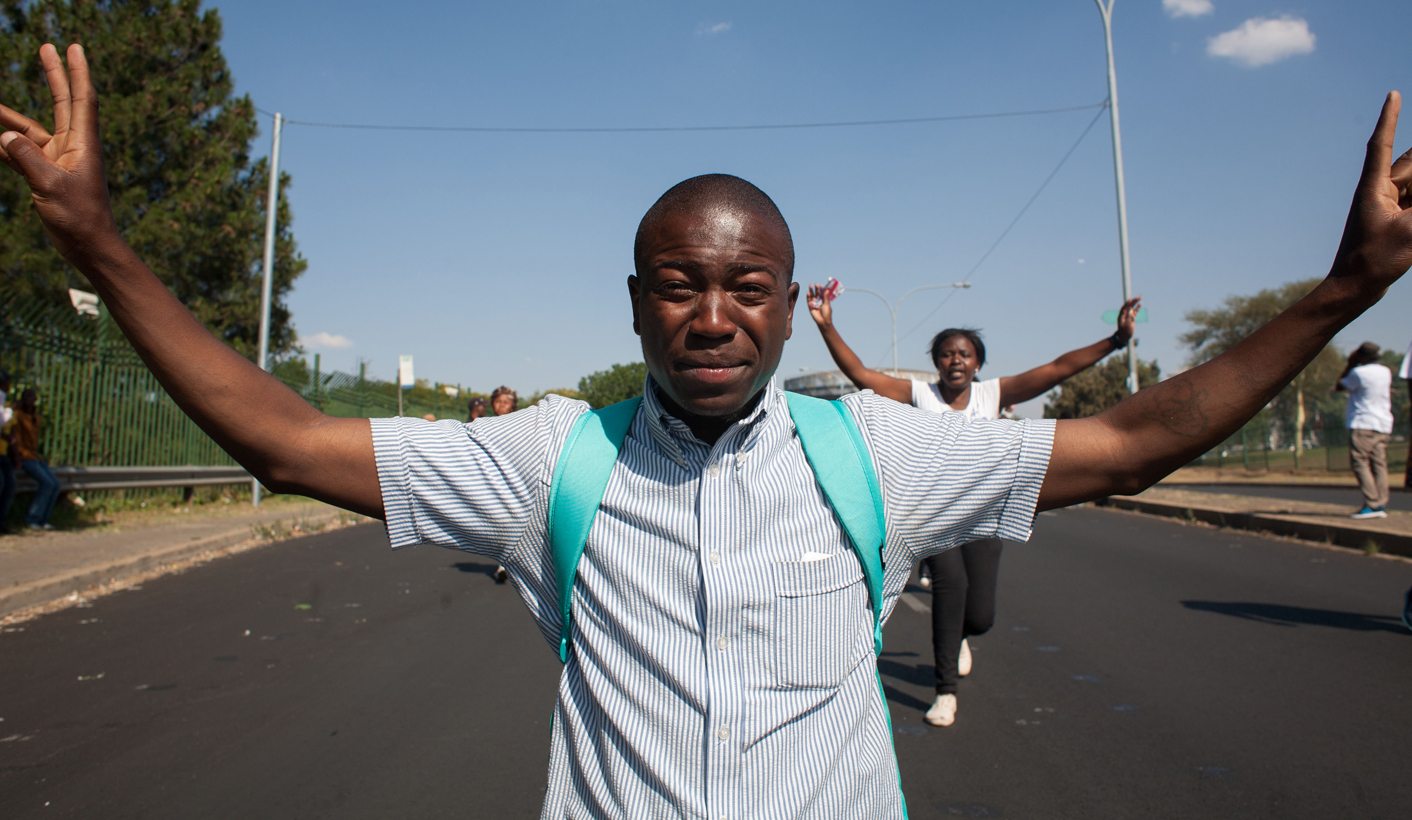 After students and staff joined the protests at universities across the country, and 141 people were arrested outside the Kingsway campus last on Friday, the University of Johannesburg (UJ) was hoping the situation would return to normal. It has not, quite. That is because violence and dialogue do not gel. By GREG NICOLSON.

On Monday morning, the 141 people who were detained overnight at the Brixton police station, met at the Johannesburg Magistrate’s Court facing charges of public violence, and violating a court order. They were told to keep quiet, and wait while their lawyers negotiated with the National Prosecuting Authority. Outside, students, workers, academic staff, and other supporters closed down Ntemi Piliso Street. Eventually, the group gathered around their lawyer who announced that the charges against the accused, mostly outsourced workers, but also students from UJ and Wits, had been dropped, pending further investigations. Those demonstrating sung in the streets, and tore up their charge sheets.

Outsourced UJ worker, Fezeka Ntlabi, said while she was worried her arrest could have led to a criminal record, they needed to take a stand against low wages, and a lack of benefits because workers cannot provide for their families.

“Of course they could not charge us as students for a crime we did not commit,” said Anisa Mazimpaka, Student Representative Council (SRC) deputy chairperson at the Kingsway Campus, who was not arrested on Friday. She pointed to her placard that read: “Why is making our voice heard equivalent to imprisonment?”

Leaving the court, about 100 people marched back to UJ. Outsourcing remains a key concern. On Sunday, the university announced an agreement reached between UJ, the National Education, Health and Allied Workers Union (Nehawu), and an outsourced workers representative that said cleaning, protection and gardening services will be insourced. A task team would be established, aiming for “decent work and a decent wage”, and provide a way forward by the end of February.

Those demonstrating on Monday rejected the agreement as they had not been consulted and the workers’ representative said she was coerced into signing. One of the students, Sizwe Shiba, said: “The vice chancellor [Ihron Rensburg] acted out of his own personal intentions, and exploited workers.”

Shiba listed the ongoing demands: lift the suspensions on students and workers penalised during the protests; implement the university’s workers’ charter; provide a clear time-frame to end outsourcing; unblock students in financial arrears from accessing their results, and scrap registration fees.

The UJ students said they had nothing to do with a bus that was reportedly set alight in Braamfontein, and that the march from town was peaceful, until they passed the Bunting Road campus. Police fired stun grenades and teargas into the crowd. It was unclear why. Some students raised their arms in peace, now a symbol of the protests in the face of South African Police Service aggression. Afterwards, some angrily confronted the police while others accused a white officer, who seemed to be in charge, of racism for allegedly ordering the stun grenades and teargas.

“This university is saying, ‘No, everything is going well… There is just a few hooligans.’ When we know nothing is normal,” said SRC secretary, Mangaliso Mkhonto, after students were eventually allowed to proceed to the Kingsway campus. The students, staff and outsourced workers waited outside a locked entrance with security guards from a private company watching from the other side. Many of those involved in the protests accuse the private security officers of violence and intimidation.

Those still demonstrating at UJ have demanded a meeting with Vice Chancellor Rensburg, and on Monday afternoon they were waiting to agree on a time and venue. They want him to commit to a public meeting.

“We have invited them, but the meeting needs to follow the normal UJ processes. It’s not like we don’t want to meet with the students. They were invited yesterday. Now they are demanding that the Vice Chancellor meets them. Where is the issue of respect? Yesterday they did not want to meet, today they make demands,” UJ Deputy Vice Chancellor for Strategic Services, Mpho Letlape, told News24.

The university was open on Monday, and exams were underway. While the small group continued to wait and sing outside the gates, many others continued through the campus as normal. Until those protesting get a hearing with Rensburg, however, they seem unlikely to stop. They have faced a culture of violence, fear, intimidation, and arrest that adds extra fuel to their demands.

In Cape Town, hundreds of students from the University of Cape Town, University of Stellenbosch and University of Western Cape marched to Parliament on Monday, after their demands were not addressed last week. Public Works Minister, Thulas Nxesi addressed them, noting demands for free education, an end to outsourcing, and a more African curriculum. While Nxesi reportedly persisted with his address, students demanded to hear from the President, Jacob Zuma, or Higher Education Minister, Blade Nzimande. DM

Photo: UJ student Sandile Mdlongwa holds his hands up after police fire stun grenades and teargas at a group of UJ staff and students. (Greg Nicolson)