President Zuma, the plot and the day he lost it 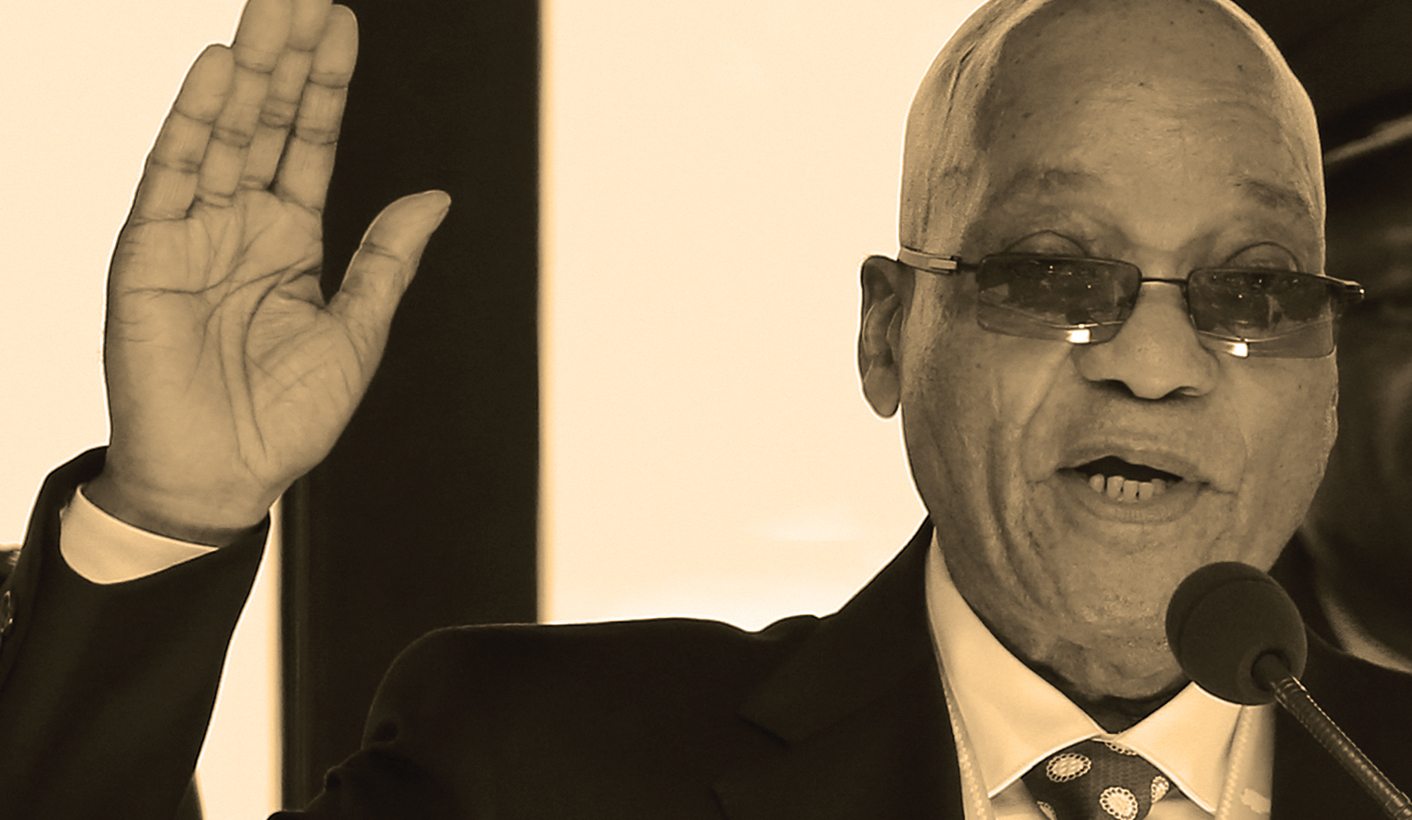 President Jacob Zuma is known to say some pretty astounding things when he strays from the prepared text of his speeches. From scolding “clever blacks” to saying minority parties have “fewer rights” to warning businesses who do not invest in the ANC that they are “in danger”, Zuma tends to detonate somewhat when he speaks off the cuff. At the highly charged KwaZulu-Natal ANC provincial conference at the weekend, Zuma launched a tirade against party veterans and exposed that he rates the ANC to be above the state. This is clearly a man who feels under siege. By RANJENI MUNUSAMY.

We will probably never know if President Jacob Zuma intended beforehand to say all the astonishing things he did at the ANC’s provincial conference in KwaZulu-Natal or he simply got carried away. The prepared text of his speech was quite innocuous, trying to imbue the spirit of the ANC’s former president Oliver Tambo at a hotly contested conference in the deeply divided province. He also tried to remind ANC delegates that the focus of the ANC should be to improve the lives of ordinary people.

“Thus we should not forget that the ordinary people of KwaZulu-Natal are interested neither in our factional battles nor in who will assume leadership positions in this conference. They are not interested in who can argue better or who can render revolutionary slogans the most,” Zuma said.

But Zuma also countered his point about serving the citizens, wading into revolutionary speak about the upholding the ANC above all. “I argued one time with someone who said the country comes first and I said as much as I understand that, I think my organisation, the ANC, comes first.”

It is a truly a mind-blowing statement for a sitting head of state to make, one who took an oath to protect and defend the country’s interests. The statement was obviously intended to renew allegiance to the ANC, which undoubtedly millions of people remain emotionally attached to. But the effect of Zuma’s statement is that he puts the ANC’s interests above that of the country’s, meaning he makes decisions that benefit his organisation first and foremost.

So whether it is service delivery or allocation of budgets, what we are now to understand is that our president focuses on advancing the ANC’s interests before national interest. Is the president making decisions to benefit the ANC financially or to increase its popularity?

If this is true, South Africa is in a perilous state. It means Zuma fundamentally misunderstands his role as State President and the oath of office he took. Twice.

Zuma went on to make another questionable statement about his understanding of political activity in a democratic state. “ANC branches must make it impossible for any counter-revolutionary grouping to mobilise our people and lead them astray,” Zuma said.

It is difficult to know what exactly Zuma meant by this but it certainly concerning that the ANC leader and head of state is instructing members of his party to inhibit free political activity. South Africa has a range of political parties organising and campaigning within the bounds of the Constitution. The suggestion in Zuma’s statement, however, is that ordinary people need to be protected from going “astray” by enemy groups.

Are South Africans not able to decide for themselves what parties they want to support? How are ANC branches supposed to make it “impossible” for these “counter-revolutionary” groups to mobilise?

Zuma tried to bridge the gap between the opposing factions in KwaZulu-Natal and encourage unity. “It is unity and discipline which made us overcome the enemy in the past and which is all the more necessary now when confronted with a hidden enemy whose only aim is to perpetually keep our people in conditions of unemployment, poverty and inequality.”

Perhaps it was the line about the “hidden enemy” that triggered the voyage to conquer the ANC’s detractors. Perhaps it was a build up of anger over criticism of his leadership. Or perhaps Zuma planned to lash out at party veterans who had been expressing concern about the state of the ANC.

“I have heard rumours that I have become a liability… How can a member of the ANC be referred to as a liability? No member can be a liability,” Zuma said. “They don’t know me well. I am going back to my branch… I understand the role of a branch. I will be here… I did not join the ANC as president but as a volunteer.”

Still addressing invisible detractors, Zuma said: “Even if you can say I am corrupt, I am going forward… I will be a member of the ANC until I die… I am not going to out there and criticise the party like others.”

Then Zuma zeroed in on identifiable targets. Former president Kgalema Motlanthe and former director general in the presidency Frank Chikane came in for a roasting.

“I read something in the newspaper where one comrade who has been respected for a long time said the alliance is dead. People are exposing themselves that they are politically bankrupt. They are now sitting at home lonely.”

Frank statements by Motlanthe in an interview with Business Day, including that the alliance existed in name only and that ANC members and leaders were devoid of “political ability and consciousness”, had clearly infuriated Zuma. Chikane had authored a document ahead of the recent ANC national general council (NGC) expressing concern about the downward spiral of the ANC. Extracts of the document were published in the media before the NGC. Motlanthe and Chikane join a range of former ANC leaders, including former president Thabo Mbeki, who have spoken out about the decay of the party.

Zuma ire was particularly aimed at his former deputy: “They criticise the party [the South African Communist Party], criticise Cosatu, criticise the ANC. These comrades were part of the leadership. Some of them were secretary generals. Why do they have wisdom now when they are sitting out there? When they were inside, we did not see that wisdom. If the ANC is weak, they weakened it when they were in the leadership of the ANC.”

Zuma went on to say: “Some of them are pastors but are busy criticising the ANC. They must go to church and leave politics.” He also said: “Some of them are running institutions which they use as launch pad to fire missiles at the ANC.”

And after all the frothing came an ominous threat: “We are not going to keep quiet forever. If you are out of the ANC for whatever reason, keep quiet. In fact, the unwritten rule is that when you are out, don’t criticise those who come after you.

“We have kept quiet because we are disciplined. But don’t push us too far. We have a job to do, to achieve prosperity in South Africa.” Zuma said former leaders should be raising their concerns in ANC branches not in the media. “They are cowards… They are just causing an unnecessary irritation and we may not tolerate this for too long.”

What would he do? Would Zuma retaliate as ANC leader, perhaps subjecting the veterans to disciplinary procedures? Would he use his position as head of state to withdraw any benefits former leaders have in their retirement? What exactly does a person with so much power do when they feel under attack? And considering Zuma’s statement about the ANC being above the state, what would he do to protect the party from further attacks?

Perhaps Zuma was just venting and wanted his detractors to back off. But he seems perpetually in need of reminding that he is the President of the Republic, and therefore his statements cannot be inconsequential. Even if Zuma does not act on his threats, he seems to misunderstand that freedom of speech is protected by the Constitution and trumps ANC convention to “keep quiet”.

But most concerning is Zuma’s failure to understand that most of these respected are leaders are breaking convention because they feel compelled to speak up about the demise of the organisation they dedicated their lives to. Just as much as Zuma claims to love the ANC, they do too. It would probably betray their own principles and convictions if people who served in the senior most positions in the ANC and the state sat passively and watched these being ruined.

Zuma probably left the KwaZulu-Natal conference in Pietermaritzburg believing he put his critics in their place. What he has done is exposed himself as a leader intolerant of criticism, free speech and free political activity, and who believes that his principal role is to protect his political organisation rather than his country.

Previously, he has mused that if he were a dictator he would “change a few things”. He seems to have a supreme misunderstanding of what the Constitution and his oath of office demands of him. Our president is a man disconnected from reality, feeling under siege and not above abusing his position for personal and party gain.

If there was not concern about Zuma’s leadership up to now, his Saturday afternoon rant should make us all really afraid of what his remaining four years as Number One could bring. DM