Parliament Diary: Ramaphosa loves students, but doesn’t know yet how to fund them 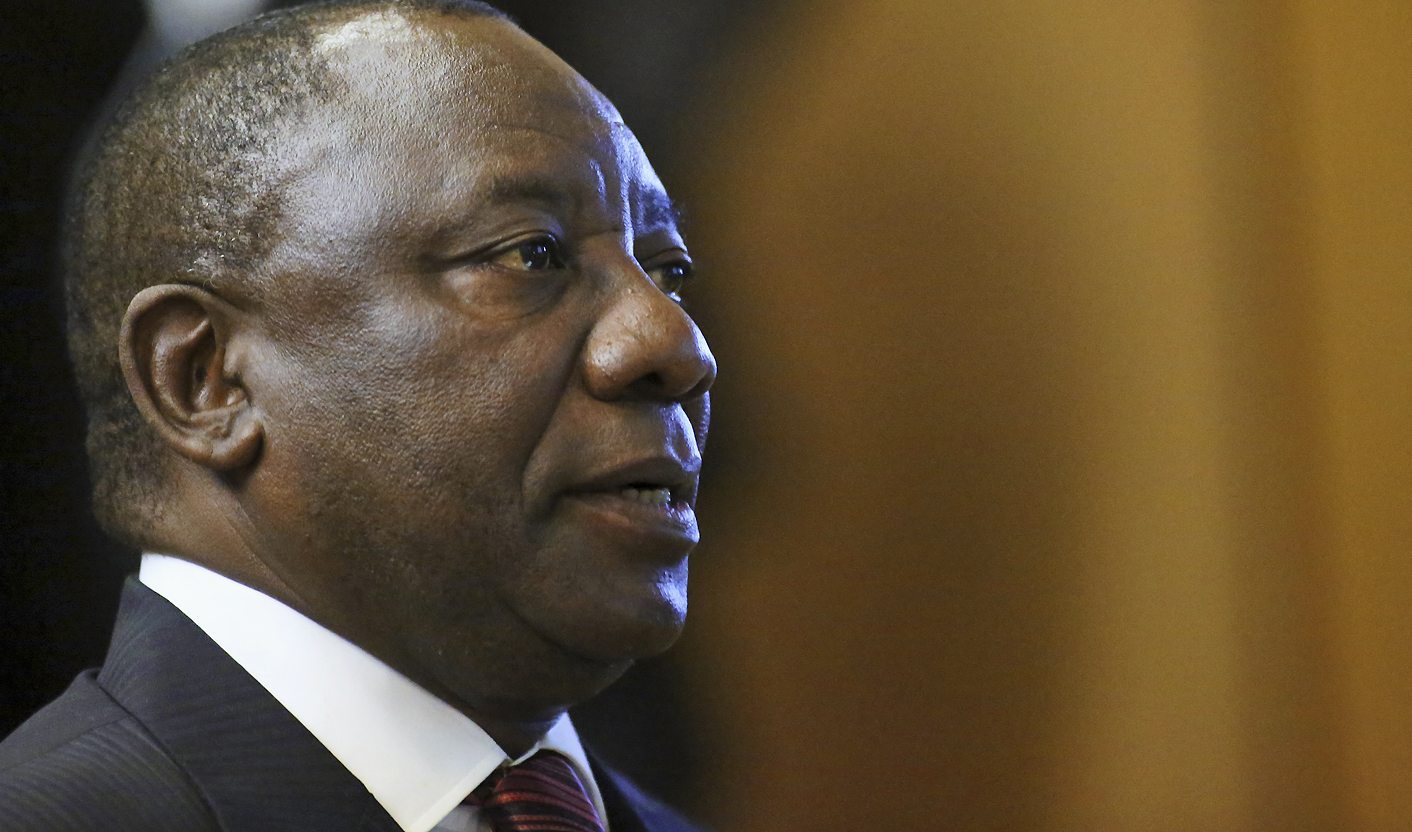 There is nothing the government has ruled out, when it comes to finding more funding for higher education. This was the message from Deputy President, Cyril Ramaphosa, answering questions in the National Assembly, on Thursday. Earlier in the day, Minister in the Presidency, Jeff Radebe, acknowledged that he could not say where the money would come from. But never fear: Ramaphosa says the ANC’s promises are “pregnant with a lot of possibilities”. By REBECCA DAVIS.

There is a kind of bingo you can play, these days, when ANC bigwigs discuss the crisis in funding for higher education. There will be reference to the fact that the youth are the future. There will be reference to the idea that the private sector has a major role to play in solving the problem of the funding deficit. And there will definitely be use of the ANC’s catchphrase of the moment; that the current fee crisis is the result of the government being “a victim of its own success”.

If you’d been watching Deputy President, Cyril Ramaphosa, taking questions in Parliament on Thursday, you would have been able to check all of these off on your sheet. The lines did not all go down smoothly with the gathered MPs, however.

The Economic Freedom Fighters’, Mbuyiseni Ndlozi, accused Ramaphosa of “deliberately misleading” the House by claiming that the ANC was a victim of its own success. Asked to withdraw the comment by Deputy Speaker, Lechesa Tsenoli, on the grounds that it was unparliamentary, Ndlozi would only withdraw the suggestion that the misleading was “deliberate”.

Ramaphosa brought out the “victim of success” phrase in response to what was without doubt the question of the day, from young Inkatha Freedom Party (IFP) Member of Parliament, Mkhuleko Hlengwa. Had the students not embarked on the #FeesMustFall protests, Hlengwa suggested, the issue of fees would not be on the government’s agenda, and the fees would not have been lowered. This is despite the fact that free education is part of the ANC’s manifesto. Hlengwa suggested that the government was now “scrambling around” for “knee-jerk solutions” to address the fee funding problem, “in the absence of plans”.

Ramaphosa, not for the first time this week, paid tribute to the students in his response. “The action that was taken by students was action that needed to be heeded by the whole country,” he said, adding that the message to students should be: “Thank you for raising this issue”. Earlier, he had been yet more effusive, congratulating the students on the “restraint” shown during protests, and the “good leadership” in evidence. Ramaphosa euphemistically glossed incidents of violence from student protesters as “exuberance”.

“We, as their elders, must listen to what our young people are saying,” Ramaphosa said.

He rejected Hlengwa’s suggestion that despite the fact that free education has been part of the ANC’s campaigning platform for some time, they had no plans to do anything about it, until the protests forced the issue on them. The issue, he said, is one that government has been dealing with “over time”.

“We do not give empty promises,” Ramaphosa said. “This promise is pregnant with a lot of possibilities.”

Reference had tangentially been made to pregnancy a few minutes earlier, when an ANC MP had heckled the EFF to “go and pay maintenance”, an allusion to newspaper reports that chief whip, Floyd Shivambu, had been confirmed as the father of a baby, despite previously denying paternity.

The question of where the money was going to come from to cover the shortfall from university fees next year, in the wake of the announcement of zero increase in fees, was one that dominated discussion again. Ramaphosa, like his Cabinet counterparts, was decidedly vague on this issue. Earlier in the day, when Minister Radebe was asked how the shortfall would be covered, he replied: “I am not the Minister of Finance. I can assure you the money will be found.”

Ramaphosa confirmed that a presidential task team has been set up to consider the issue. “Government will have to consider all the facts, and consider how to reprioritise funding to ensure stability and growth of the system,” he said. The previous day, addressing the National Council of Provinces, Ramaphosa had, once again, alluded to a wealth tax as a potential revenue source.

Democratic Alliance (DA) leader, Mmusi Maimane, repeated to Ramaphosa a suggestion made previously by the DA; that the necessary funds be found by cutting spending on VIP protection services; shifting R720 million allocated to International Relations, to counter the impact of currency depreciation, and reallocating non-essential expenditure, including on luxury vehicles.

Ramaphosa did not seem kindly disposed towards Maimane’s suggestions.

“That to me falls in the category of cheap shots,” the deputy president replied. “You must never think that you have a monopoly on ideas.” He also suggested that “much bigger things” than Maimane’s proposals were in the pipeline.

Maimane subsequently put out a statement, saying it was “clear” that the government “is not committed to finding solutions to fund the R2,33 billion shortfall created by the 0% university fee increase”.

That’s not what Ramaphosa was saying, however. “We will be able to find solutions,” he told Maimane confidently. “Our young people are our future and we have to secure that future.”

It’s practically unheard of for Ramaphosa to be in the National Assembly, and not have the EFF take potshots at him for either his wealth, or his involvement in Lonmin. Sure enough, they arrived. With Ramaphosa taking questions on South Africa’s role in mediating a peace deal in South Sudan, the EFF’s Mbuyiseni Ndlozi saw a gap, and took it.

What guarantees did South Africans have, Ndlozi asked, that Ramaphosa’s involvement in South Sudan would not lead to more of the “thieving that you are famous for”, in order to protect white monopoly capital?

In the ensuing scuffle about whether Ndlozi was entitled to make such comments to the deputy president, the EFF’s Shivambu contributed: “To say they are capitalist thieves is a fact.”

Ramaphosa failed to take the bait, however, responding diplomatically that all the government’s actions abroad were motivated by a desire to adhere to the principles enshrined in the Constitution. Shivambu shook his head derisively.

Another EFF MP snuck in a cheeky reference to Ramaphosa “suddenly becoming a millionaire” after the transition to democracy. The deputy president’s wealth was confirmed again recently. Ramaphosa declared shares worth over R110 million in Parliament’s register of Members’ interests, last week.

With fur flying across the chamber, acting speaker Tsenoli at one point sighed: “This is bad… This is absolutely bad and out of order.” But compared to what we’ve seen on other Parliamentary occasions over the past 18 months, it was a perfectly dignified session. DM