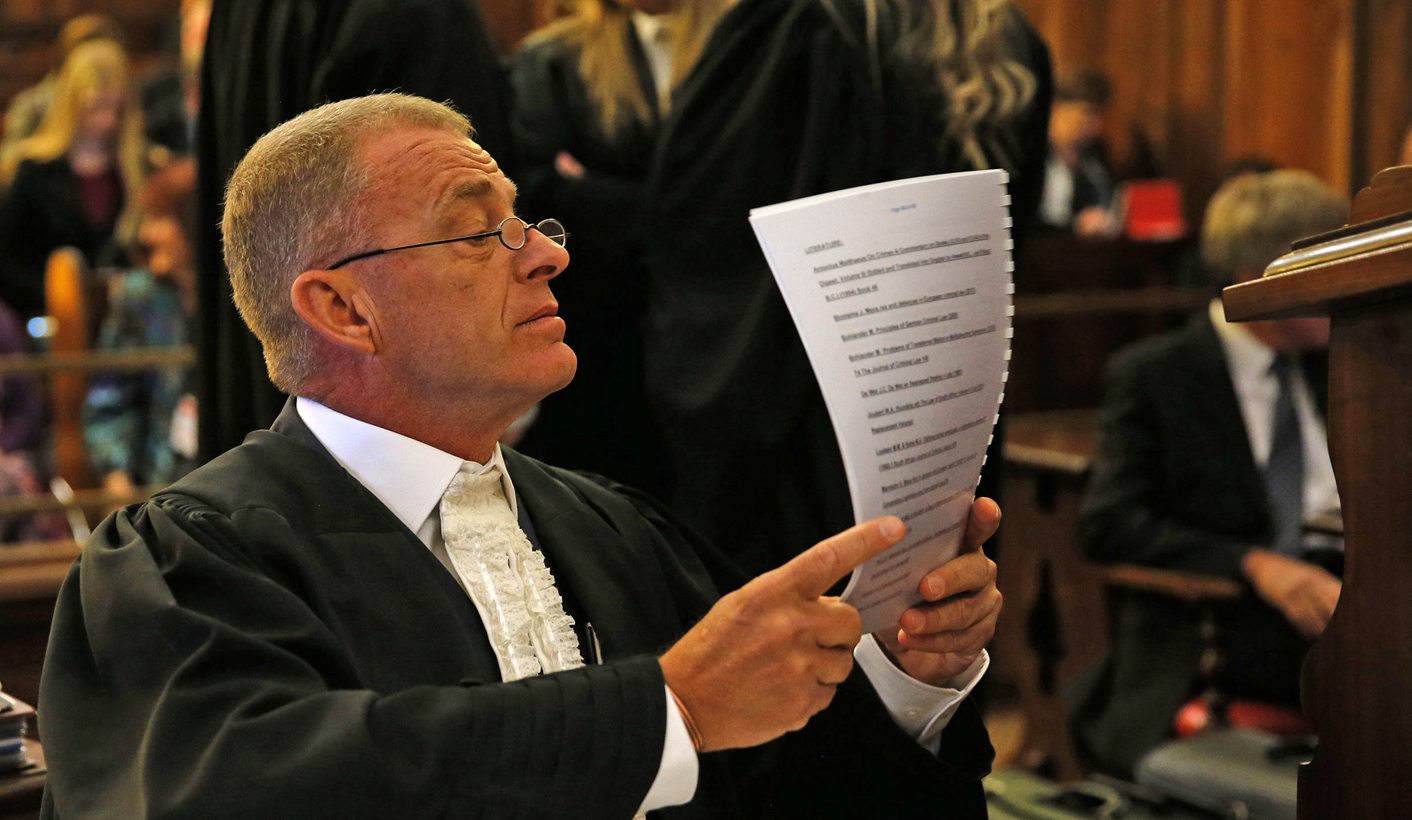 For those who watched the Pistorius proceedings live on television, it was immediately obvious that the Supreme Court of Appeal is a completely different arena to the country’s magistrate’s courts or even the High Court. The overwhelming sense many would have felt was that the law is in good hands. By MANDY WIENER.

Nearly three years on from Valentine’s Day 2013, the night Oscar Pistorius shot dead Reeva Steenkamp, and it feels like the case has permeated our existence so extensively that it is impossible to escape. We are all suffering from extreme Oscar fatigue and just when we think we have moved on, it bubbles back to the surface, garishly occupying news headlines and Twitter timelines.

The circus rolled back into town Tuesday on ‘Dolus Eventualis Day’ when the matter came before the Supreme Court of Appeal (SCA) in Bloemfontein. Essentially, the State wanted Judge Thokozile Masipa’s judgment of culpable homicide overturned to murder.

As expected, there were ad nauseam mentions of dolus eventualis and dolus directus and the rabid opinionated trolls made a meal of whether Masipa was wrong or right, but for many it was too much to bear to watch Barry Roux and Gerrie Nel rehashing all their arguments yet again. You would have been excused for unplugging your TV, shutting down your laptop and burying your head under a pillow for three hours.

But I want to tell you that there was far more to yesterday’s proceedings than just the fate of Oscar Pistorius.

On the face of it, the decision by the National Prosecuting Authority to take this matter on appeal smacks of a desperate prosecutor intent on seeing a disgraced superstar convicted of murder. Supporters of Pistorius would easily argue that Gerrie Nel is so hell-bent on seeing the athlete rot in jail that he would do anything to have Masipa’s judgment overturned. But the decision to appeal is far more complex and nuanced than that. It was a crucial step that had to be taken to clarify aspects of the law and to create precedent and that was evident beyond the theatrics of yesterday’s argument.

For those who did watch proceedings live on television, it was immediately obvious that the SCA is a completely different arena to the country’s magistrate’s courts or even the High Court. It carries with it far more gravitas, the seats are plusher, the leather more polished, the wood gleams more and the argument are more astute. The Judges are more combative, interrupting and querying, pushing and prodding, dancing and journeying along with the counsel.

As much as we resent the Pistorius case for occupying so much of our space, the one thing it has very successfully achieved is that is has educated the greater public about how the law and the courts work. Many who watched the trial on TV learnt a considerable amount about criminal procedure and about the finer details of leading witnesses and cross examination. That was again the case on Tuesday. It was the first time, to my knowledge, that an SCA case was broadcast live and it would have been the first time that many members of the public would have had the opportunity to witness that level of legal debate.

The overwhelming sense many would have felt having watched that for the first time, was that the law is in good hands.

Firstly, a full bench of five judges heard the matter and the panel was representative of a transformed judiciary. The bench included two women and a coloured, black and white man. Secondly, they were all incredibly well prepared, having read the full record of the trial court. The SCA judges would have received the transcripts several weeks ago and would have read every word of the evidence presented to Masipa. They also would have had researchers preparing extensive documents on legal questions that could arise during the appeal and many would have already formulated positions in their minds. The SCA judges have a large workload but they also have more time than those at lower courts, who are burdened with fuller schedules. Thirdly, the judges are all extremely smart and really know the law. By virtue of the fact that they sit on a higher court, they are the cream of the crop. Their questions were incisive, razor sharp and thought provoking. To watch two veteran criminal advocates like Gerrie Nel and Barry Roux writhing and reeling from the interrogation was quite spectacular. Justice Eric Leach had Roux on the ropes for nearly half an hour as they went back and forth over questions of law versus questions of fact. Justice Steven Majiedt was relentless in his pursuit of understanding how Masipa reached her findings.

It is this kind of confrontation that sees lawyers waking up in the middle of the night in a cold sweat from the nightmare of having to appear before the SCA.

Many in the legal fraternity also believe that yesterday’s argument helped provide clarity on long standing legal questions. Most profoundly, it brought finality to the perplexing matter of ‘The Hippo’, which has achieved mythical status in SA law. The dusty case of the State vs Seekoei was effectively killed yesterday, put to death after more than thirty years.

In 1980, a man by the name of Isak Hofmeyer Seekoei attacked a woman on her farm in Bultfontein in the Free State. He tied her to a pole with barbed wire and made off with the keys to her shop and stole money and other valuables. The State wanted him convicted of robbery but Seekoei was convicted of the ‘lesser charge’ of theft. The State took the case to the SCA and the appeal court made a landmark ruling that would stand for the next three decades. The appeal judges declared that the State can only appeal against a High Court judgment if the accused was acquitted, not if there was a conviction on a competent lesser charge.

Gerrie Nel had to overcome this hurdle yesterday. According to Seekoei, the State couldn’t appeal Masipa’s judgment because she had convicted Pistorius on the lesser competent charge of culpable homicide rather than murder. Seekoei suggests the State could only appeal if Pistorius was acquitted. But Nel made short work of killing Seekoei and even Roux seemed to agree with him. The judges went as far as suggesting this is no longer good law and that Seekoei has been superseded by a more recent Constitutional Court judgment, that of State vs Wouter Basson.

The hippo is dead.

Once the SCA returns its decision, there will also likely be clarity on the much debated legal principle of dolus eventualis. Many legal experts have suggested that Masipa conflated this principle and that of putative private defense. This was the basis of the second big argument of the appeal – whether or not Masipa made errors of fact or of the law. It is hoped that the SCA will finally distill this issue and help the legal fraternity out of the murky grey area it currently finds itself in.

While it is never wise to predict how the SCA or the Constitutional Court will rule, overwhelming consensus seems to be that Masipa’s judgment will be overturned and substituted with a conviction of murder. The matter will likely be sent back to the High Court for sentence to be reconsidered. This act in itself could do a great deal to restore the public’s faith in the criminal justice system which was to a degree eroded by Masipa’s original decision. The court of public opinion has roundly convicted Pistorius of murder and many felt let down by a system that they felt allowed him to ‘get away with murder’. This is precisely why there is an appeal structure in our courts.

It is for all of these reasons that I insist that Tuesday was about more than just Oscar Pistorius. Of course I understand that a man’s life is at stake and that the court could decide whether or not he is convicted of murder and potentially sent back to jail, but there are also issues of principle and fundamental matters of law that are being impacted.

One of the core foundations of South Africa’s constitutional democracy is that the law must not only be done, but it must also be seen to be done. On Tuesday, the law was done at the very highest level in the country by astute minds who engaged with vexed, complex issues. There can be little doubt about that. But crucially, the law was also seen to be done. It was broadcast live on television for the public to watch in full and having witnessed the court in action, we can be assured of the sanctity of the rule of law in our country. DM