GroundUp: Snakes in the classroom 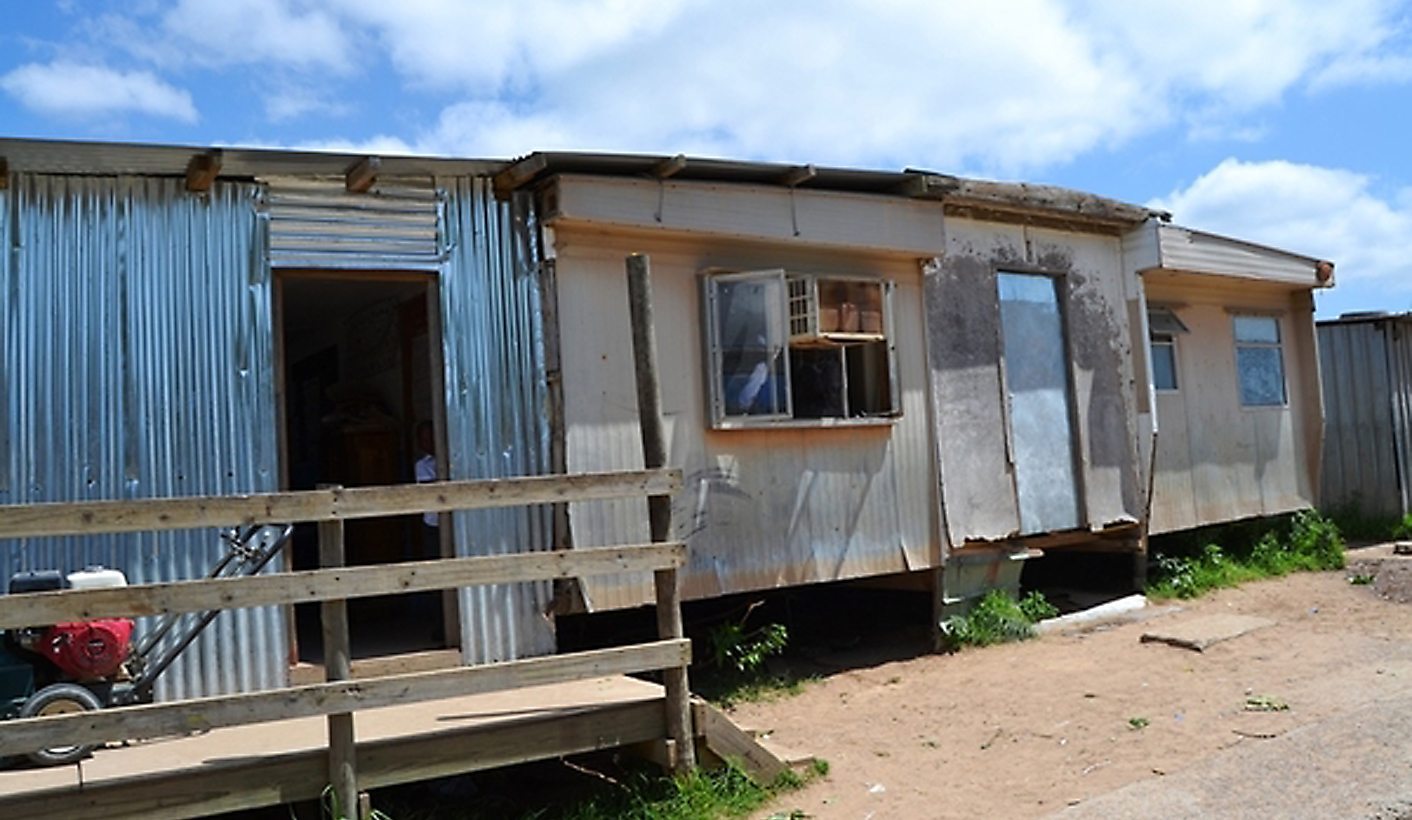 A school caretaker falls into a pit toilet, and struggles for an hour to get out. Snakes invade a primary school classroom. It is just another day in Eastern Cape schools. By Nombulelo Damba-Hendrik for GROUNDUP.

At Amatolaville Primary, GroundUp’s interview with school principal, Ivan Mentoor, was interrupted by school children screaming outside, some running, shouting that there were snakes. Mentoor said this was what he dealt with almost every day. When pupils saw a snake, they had to move to another class.

Nomathuse Daniel, a Grade 2 teacher, said she was still jumpy after students saw a snake the previous day. “Sometimes they are small, but there are times we get big snakes … Remember, this is a primary school; we cannot expect kids to kill a snake.”

“This is a very sad situation, the shack walls are broken and our classes are overcrowded,” she said.

Another teacher, Nombulelo Burnes, said: “The snakes are terrorising us, and once you see it you won’t relax the whole week.”

“We no longer wear high heels. We must make sure that we wear takkies when we come here,” she said.

Burnes also said she had recently left her classroom, after the wall fell over while she was inside teaching. The school is built from shacks, and some brick classrooms have been donated by non-governmental organisations, or were built by parents. Pupils call the school amatyotyombe (shacks).

“This is not a school. When it rains, we are forced to move around the classroom looking for cover because the roofs are leaking,” said one pupil.

Mentoor said, “Since 1999, I’ve been fighting to have a new school. It is not the case that the education department is not aware; they know the conditions of the school, but they turn a blind eye.”

“As much as we are dedicated, and pushing for our kids to get better results, these conditions demotivate our teachers,” he said.

Grade 9 student, Aphelele Mgidi, said the school conditions made him uncomfortable. “I sit next to a crack. When it’s raining, I have to move my desk to the other side and I do not think it’s fair … I’m here to learn,” he said.

Kalalo Junior Secondary, in Mqanduli, in Xhorha township next to Mthatha, is built of cement blocks and mud. The school is overcrowded, and short of classrooms. The toilets have been dysfunctional for a long time, and the school resorted to building pit toilets. School caretaker Mntondini Saphepha recently fell inside one of the pit toilets.

“I’m lucky to be alive,” he said. “It was around five in the afternoon. I was patrolling, checking if everything was in order … The toilet floor is made of wood. As I was standing up, one wood fell down. I could not balance; I fell inside the toilet.”

“Only my neck and head [was out], my whole body was inside the toilet,” he said.

He cried for help, but realised that he was the only one left at the school.

“I was there for almost an hour. I thought I was going to die, but luckily I’m not scared of water. I pulled myself up,” said Saphepha.

“This is a very old school. Government was supposed to build us proper toilets like other schools in cities,” he said. “The smell in those toilets is unbearable. Imagine being stuck there for an hour.”

“The school informed the district offices about the incident but they ignored them. I still demand an apology,” he said. “I was lucky that I didn’t break my leg; I had minor injuries. I went to the clinic and was given medication.”

Nojongile Junior Secondary School in Dutywa, is also a mixed structure of blocks and mud. The school starts teaches Grades R to 9, and has 180 kids.

School Principal, Sinqibo Njaba, said among his challenges were overcrowded classes and a lack of teachers. Some classes have two grades in one classroom, some even three grades in classroom. Njaba said his school was one of the abandoned ones.

“We have only five teachers. This school was built by the community in 1987. Classes are leaking. In winter we have to shift places just to make sure that pupils are safe. When it’s hot, we have open classes under the trees. Each teacher teaches nine subjects in two classes,” said Njaba.

He said he had tried, but got no help from the Eastern Cape Education Department.

Equal Education has sent letters to the Provincial Departments of Education, raising serious concerns around the deficiencies in the school infrastructure regulations.

“It has been almost two years since the Regulations Relating to Minimum Uniform Norms and Standards for Public School Infrastructure (the Norms and Standards) were promulgated into law on the 29th of November 2013. Since then, EE, with the assistance of the EELC, has written a number of letters to the Minister, raising serious concerns over vagueness and loopholes in the wording of the regulations,” said EE.

There has also been a delay in releasing the provincial implementation plans, which are required by the new law. According to the EE statement, these implementation plans were due by 29 November last year, but were only released to the public in June, this year, after months of letters, protests, marches and sleep-ins led by EE members. DM