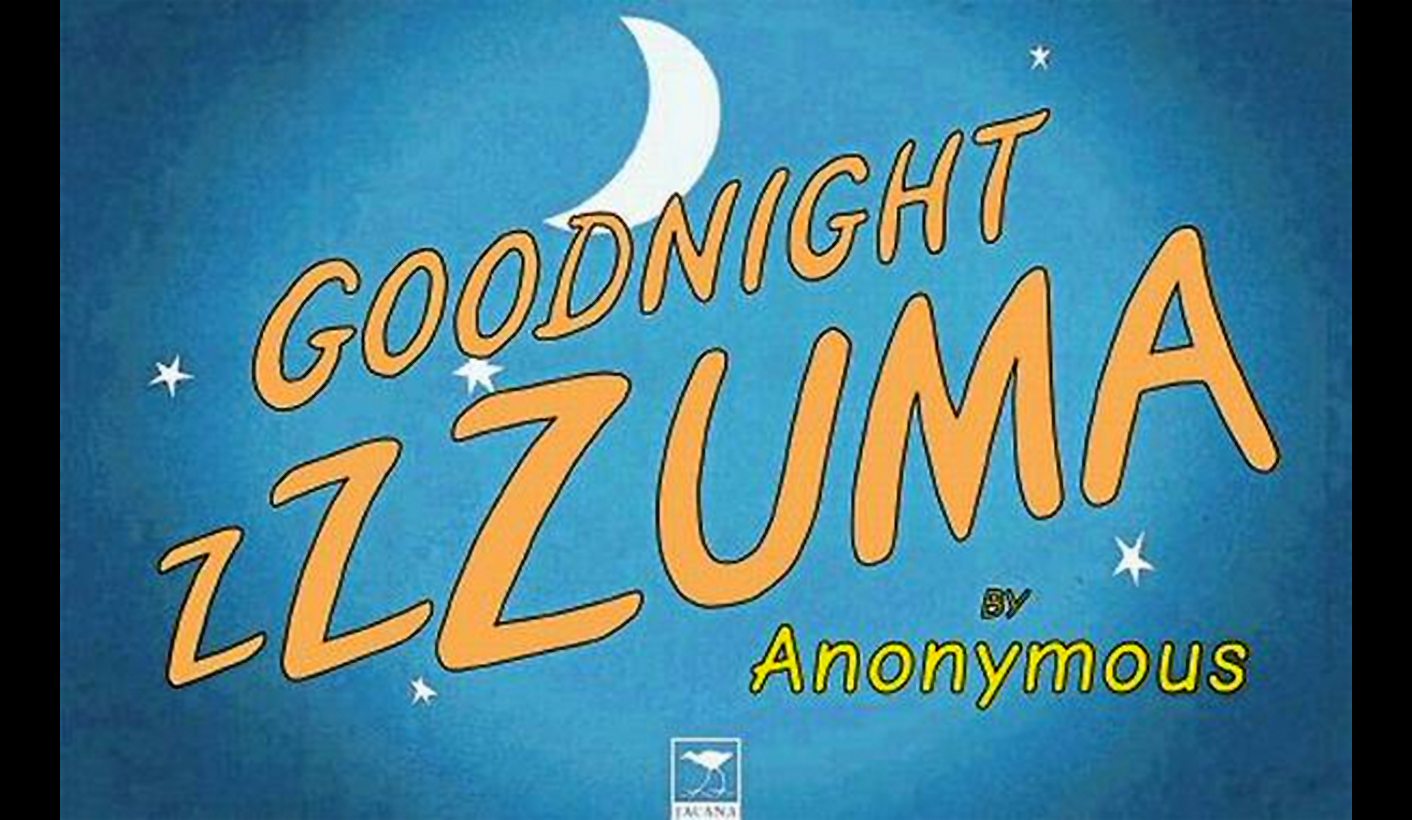 Political satires and parodies have a long history of taking the mickey out of the mighty and the powerful. J. BROOKS SPECTOR looks at the latest in this tradition. It is a good one, a pseudo-children’s book, Goodnight zzZuma, built upon that great children’s classic from the late 1940s, Goodnight Moon, by Margaret Wise Brown.

We are accustomed to nodding in agreement with the adage that the pun is the lowest form of humour, even as we simultaneously acknowledge that imitation to be the highest form of flattery. If those are both true, then the angry parody may well be imitation’s very close relative, but it is one you have to keep a careful eye on at family gatherings, whenever there are children or credulous adults around. The secret to success in this genre seems to be to take a well-known, immensely popular literary work, and then twist it for use into a more savage political tract, or into some sharp-edged social commentary.

Consider two plays, Barbara Garson’s MacBird and Pieter-Dirk Uys’ MacBeki for example. The former was a bitter appropriation of Macbeth as an apt mirror of America’s deeply troubled times amidst the Vietnam War, while the latter was a retooling of the Scottish play, to reflect on the increasingly paranoid elements of Thabo Mbeki’s presidency in South Africa.

Both kept true to the intrigues and murderousness of the original tale, but both made use of Shakespeare’s works to deliver an acid-tipped portrait of contemporary politicians, and their intrigues and plots. Parody sometimes can shade easily into angry, bitter satire and social critique in the right hands.

For nearly seventy years, Margaret Wise Brown’s Goodnight Moon has been essential equipment for coping with small children at bedtime. With its gentle, repetitive words and phrases, and its calming rhythmic structure and meter, Goodnight Moon has helped soothe countless restless children into a peaceful sleep, even if they had a difficult stressful day.

The plot is simplicity itself. In a quiet great green room there are calming, familiar objects. These include a telephone, a red balloon, pictures of a cow jumping over the moon, of the three bears, a little toy house and young mouse, a comb and a brush, a pair of mittens, two little kittens, a bowl of mush, and, of course, that quiet old lady who is whispering, “hush”. She has the physiognomy of a rabbit, just like the child being put to sleep in his bed. The quiet old lady becomes a repetitive leitmotif as she whispers, “hush”, after successive recitations of the names of those familiar objects to be identified, and said “good night” to by the child. The bunny child, as well as the actual child being read to by a parent, inevitably begins, repetitively, to say “goodnight” to each of the objects in the room, as well as to night-time objects in the sky, in the larger world outside the great green room.

The psychology behind this story is pretty simple, but the hidden magic of the tale comes in those comforting repetitions that are so soothing, that parents often find themselves falling asleep right along with the fretful child. In this writer’s own household in years gone by, both parents quickly found themselves able to recite the book by heart, as one or the other daughter held the book, turned the pages and pointed out their favoured pictures.

Along the way, this writer’s wife actually managed to create a tune for the book’s seemingly simple words. This made it easier to chant, repeatedly, especially if the reader was about to fall into an exhausted fugue state following a hard day’s work, wary of the struggles of the bedtime routine. Not too surprisingly, the writer’s family wore out at least two copies of this book, well before the children outgrew its story.

Goodnight Moon’s enduring popularity around the world has meant it has been translated into at least a dozen languages since 1947. In time, its familiarity and style probably meant it would, inevitably, become a platform for parodies, among them, Goodnight Bush and Goodnight Dune, with their respective targets being a rather feckless US president, George W Bush and science fiction author and scientology founder, L Ron Hubbard.

Now, just in time for Christmas, along comes the newest parody version of this classic, entitled, Goodnight zzZuma, a cautionary tale for our own rather troubled time, in the (presumably) final act of Jacob Zuma’s ongoing misrule. With illustrations that are an especially wicked reinterpretation of the classic originals by Clement Hurd (a frequent collaborator with Brown on her other children’s favorites such as The Runaway Bunny), Goodnight zzZuma delivers a significant amount of its anger tucked into the margins of the book’s pages, subtly, but with considerable malice.

Both the author and the illustrator of Goodnight zzZuma are listed as anonymous, but it is a fair guess there will be real effort on the part of many to sort out the identities of those responsible for this new book. And once some people see the book, and look at its pictures, there will there be fiery demonstrations at toy and bookstores, in line with the protests over the infamous Brett Murray painting of Jacob Zuma exposed, where protestors demand it be withdrawn from circulation? Or will such expressions actually contribute to impressive holiday season sales? Now there’s a question worth pondering.

The characters that infest Zuma’s bedroom mimic, are more malevolent, than those in Margaret Wise Brown and Clement Hurd’s great green room at bedtime. This time around they include pictures of the president’s four wives, a clearly rotund “nephew nepotic”, descriptions of those frequently empty government offices, the brothers Gupta, Thuli Madonsela, a private helipad, an invisible someone from Mossad, Nkandla, and its infamous fire pool, the cattle for that specially constructed kraal, e-tolling gantries, fracking in the Karoo, Marikana, Riah Phiyega, Omar al-Bashir, and a growing litany of civic protests glimpsed fleetingly through the bedroom’s windows. Instead of the immensely comforting quiet old lady whispering “hush”, there is, instead, a rather particular grand old man who whispers, “eish!”.

The original book is that miracle of children’s literature; a perfectly balanced book that both soothes and reassures. This new version does nothing of the kind, of course. As one moves through the book, the scenes through the window and of the bedroom increasingly fill up with vignettes of growing disorder and chaos, replete with crowds of rioting citizenry and angry youths, that would seem almost guaranteed to keep Number One up through the night.

As an angry political critique designed for adults, Goodnight zzZuma can be a bit scattershot. But perhaps that is meant to be reflective of the inner chaos of the Zuma administration, in which the only real certainty seems to be a desire to protect the leader at the top, no matter what else ultimately ends up in the political trash compactor. And the scansion of the text seems rather less consistent than the original. It is almost as if the anonymous author started out with W Clement Moore’s The Night Before Christmas in mind, before finding the way back to Margaret Wise Brown’s pitch-perfect volume.

But maybe these criticisms don’t really matter all that much. This book is a razor-sharp poke at a regime whose only real purpose – or so the argument in the book seems to be predicated on – is wealth accumulation for the leadership and its friends, without regard for what may happen to everyone else.

When shown this new book, this writer’s wife pronounced herself thoroughly displeased with it because how it surreptitiously undermined her deep love for the original book. But everyone else should consider buying a copy or two or three to put under their respective Christmas trees, next to their Chanukah menorahs or besides their Kwanzaa candlestick holders – or to give to friends. But just don’t read it to the children. DM