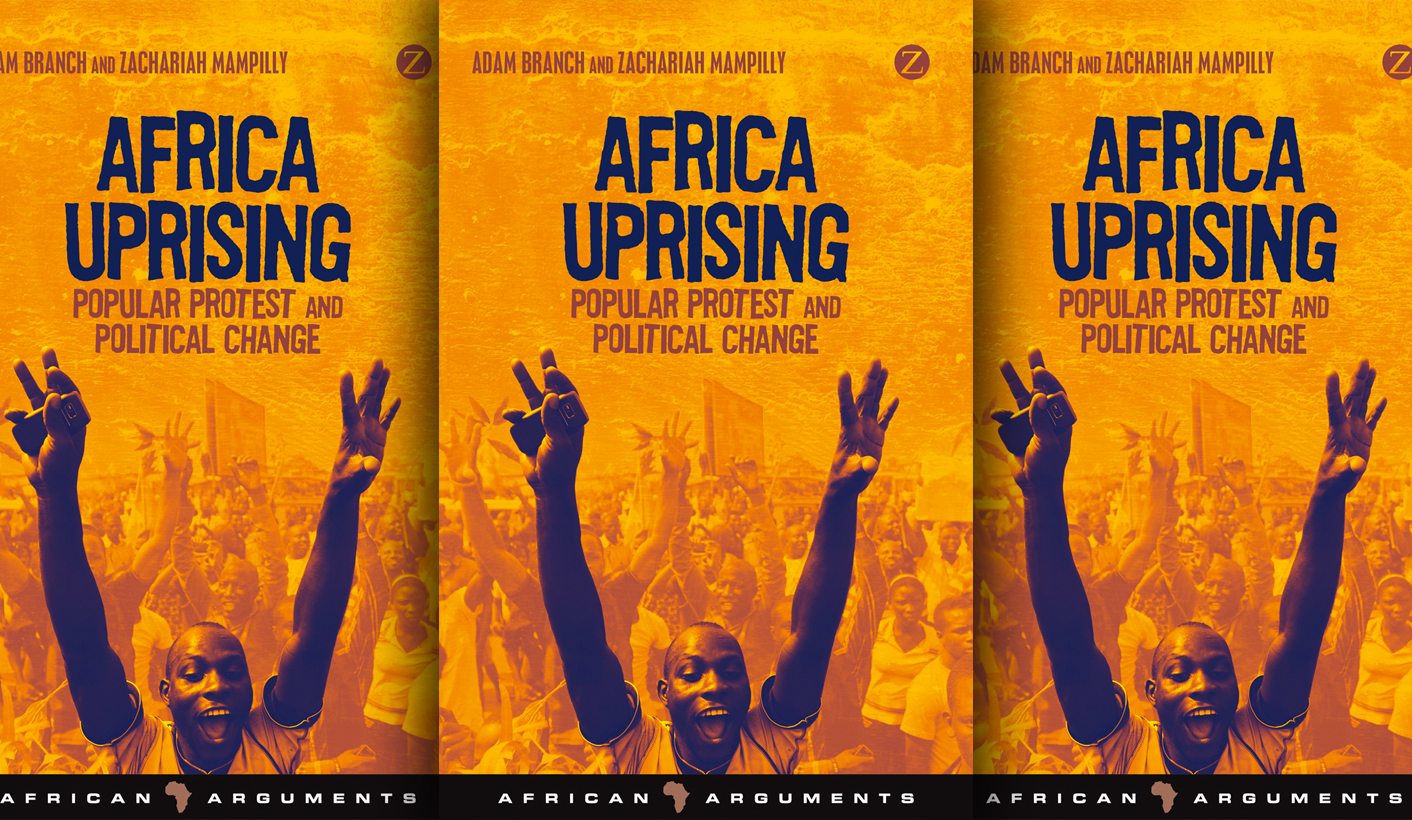 As South Africans, we often tend to view our political struggles as existing in a silo. But the shifting political tides in our country are reflected across Africa, as a new wave of popular protest, often led by young people, sweeps the continent. With the #FeesMustFall student uprisings still ongoing, it’s helpful to consider the ideas of a new book, which charts the latest moment of African protests. By REBECCA DAVIS.

“For almost a decade now, huge numbers of people from across Africa’s urban populations have been taking to their cities’ streets to demand change,” academics Adam Branch and Zachariah Mampilly begin their new book, Africa Uprising: Popular Protest and Political Change.

“Popular protest has been sweeping the continent, erupting in dozens of countries from Egypt to South Africa, Ethiopia to Senegal, Sudan to Angola. These protesters are seeking to fundamentally transform Africa’s political and economic inequities. Yet there has been little effort to understand how they see their continent today or what their visions might be for Africa’s future.”

Branch and Mampilly’s book is an attempt to address this vacuum, and tease out some of the collective meanings of Africa’s historical and contemporary protests. Of course, political protest is ongoing all over the world, on all continents. The book suggests, however, that African protest has been consistently overlooked in discussions of the Arab Awakening, the Occupy movement in the US, and anti-corruption protests in Asia.

Why has African protest been ignored? In part, the authors suggest, because of “long-standing Western images of Africa as too rural, too traditional, and too bound by ethnicity for modern political protest to arise”. When protests do make it into the international press, it is often for reasons of violence. This conforms to the stereotyped notion that political change in Africa is invariably driven by violence. Scenes of riots or looting in Africa are thus reassuringly familiar to international commentators.

The authors point out: “Even when popular protest on the African continent is deemed politically momentous, as it was in Tunisia and Egypt in 2011, it is turned into an Arab Spring, divorced from its geographical location”.

Resistance and struggle have been a constant feature of the African political landscape in modern times. The book notes that as early as 1915, a popular uprising against British rule in Malawi occurred to challenge land policies, and the forced conscription of soldiers. In 1929, thousands of Nigerian woman participated in a month-long protest against British colonial authorities. The authors suggest that Africa is currently experiencing its third major protest wave of the last hundred years. The first brought down colonial rule. The second brought an end to a number of dictatorships and military states. What political change will this latest wave bring?

Protests have often not effected regime change, or even made meaningful inroads into state politics, but the authors warn that its impact should not be diminished. They identify 40 countries throughout Africa which have seen a new wave of protest sweeping through them since the late 2000s.

Although South Africa is not a specific focus for the authors, many parts of the book will ring a familiar note. “Since the colonial era, the urban underclass has faced dramatic state violence, especially in response to any effort on its part at political mobilization,” the authors write. “This prevalence of violence can make non-violent protest on the part of urban political society a near-suicidal strategy, as [Frantz] Fanon relates.” The book points to the killing of more than 200 protesters in Guinea in 2007 as an example.

As always, much of the cause of political protest has been economic. In the first decade of independence, many African states made significant strides in developmental terms. The debt crisis of the 1970s, and the collapse of prices in the extractive industry, saw the introduction of punitive structural adjustment programmes from the World Bank and the International Monetary Fund, which brought considerable hardship for urban populations.

Trimming government labour forces and parastatals did not magically fix corruption, or economies, the book suggests. “Rather, it swept the ground out from under an entire socio-political order that reached deep into urban and rural settings and that had, when it was functioning, offered a significant degree of stability,” the authors write.

The “neoliberal dismantling of developmental states” saw worker demonstrations increase, and students at African universities face the reality that employment after education was no longer guaranteed. Workers and students have been regular comrades in African political protest, as was the case during the mid-1970s struggles in Niger.

While the 1990s and 2000s have seen GDP figures rise in some countries, they have done so in tandem with increasing poverty. Competition from China in terms of cheap manufacturing has stymied African industrialisation. Urbanisation continues to rise, but those who arrive in the cities are “rarely able to establish secure livelihoods”.

And it is Africa’s youth who are set to feel the pinch most, with two-thirds of the continent’s population under the age of 24. “A growing political society of frustrated youth is a recipe for urban uprisings and other forms of possibly destructive political action, a reality not lost on African governments,” the authors write.

Opportunities for elites to enrich themselves are still expanding, however, often through foreign investment and the extractives industry. The expansion in super-wealthy Africans is part of what has fuelled the “Africa Rising” narrative, which proposes that “a globalized and professionalized African elite will provide a counterweight to [the] entrenched, corrupt state elite, driving on an inevitable democratic transformation”.

In practice, however, the authors write that this elite class is rarely significant enough, and its interests are too closely bound up with the state itself. It will seldom align itself to the protests of the rural poor. The political importance of civil society and Non-Governmental Organisations (NGO) is also cast in a skeptical light. While Africa’s poor might be better off in material terms for the mushrooming of NGOs continent-wide, the authors suggest this has often been at a “significant political cost”. One reason is – as we have seen in South Africa – that states can pass off some of their own social responsibility to citizens through NGOs. In this way, “patronage relations” emerge between African populations and NGO donors.

Furthermore, the authors suggest, the reliance of many NGO narratives on “entrepreneurialism” and “resilience” can serve to steer their beneficiaries away from collective political action towards individual enrichment. Other NGOs, they concede, strive to merge their efforts with wider popular struggles. “There are novel alliances forming between political society, organized labour, middle-class activists, NGOs and political parties,” the book notes.

Case studies like the Occupy Nigeria movement in 2011 suggest that popular protests, drawing together truly diverse participants, are increasingly possible on a continent often painted as irrevocably divided by class, region, religion and ethnicity. Uganda’s 2011 ‘Walk to Work’ urban uprising saw middle-class Ugandans asked to take to the streets on foot in solidarity with the poor, who could no longer afford transport.

The impact of such protests have been mixed. After Ethiopia’s 2005 uprising, driven largely by disenfranchised youth, “urban youth from all backgrounds were given employment so as to mitigate their grievances and to use their labour to transform the city [Addis Ababa] in order to prevent further protest”. Though urban infrastructure has greatly expanded as a result, the state used these projects, in particular, to dismantle neighbourhoods perceived as opposition strongholds.

What will the eventual historical understanding of the 2015 #FeesMustFall protests be, and what will their long-term implications (if any) look like? It is too soon to tell. As Branch and Mampilly’s book makes clear, though, the frustrated youth of South Africa have counterparts mobilising for new forms of political resistance continent-wide. DM

Africa Uprising: Popular Protest and Political Change (2015) is published by BestRed, an imprint of HSRC Press.