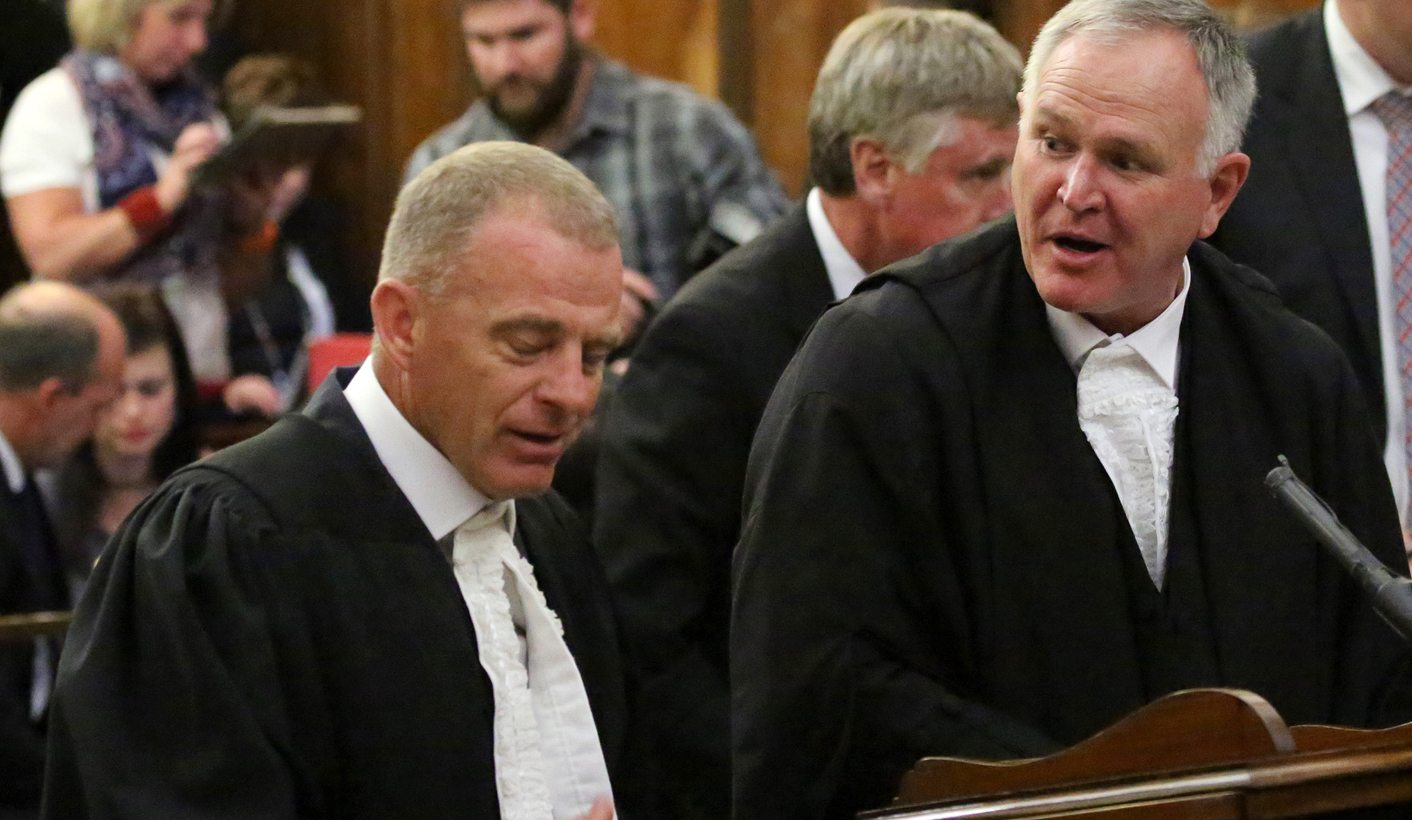 Oscar Pistorius’ fate hangs in the balance today after a gruelling appeal hearing, with his defence team appearing to concede defeat. By SIMON ALLISON, reporting from Bloemfontein.

“But that I am going to lose is a fact,” Pistorius’ lead advocate Barry Roux was overheard saying to state prosecutor Gerrie Nel after delivering arguments, according to South African news site News24.

The Paralympian was convicted of culpable homicide last year for killing model girlfriend Reeva Steenkamp. The prosecution challenged this verdict, arguing that he should have been found guilty of murder instead. If successful, Pistorius will likely return to prison from house arrest.

A full bench of five judges at the Supreme Court of Appeal in Bloemfontein heard submissions from both sides on Tuesday morning. The tone was typically combative for this stage of the judicial process, with neither lead counsel being allowed to settle into a rhythm.

Broadly, arguments centred around three main issues: whether this court had the necessary jurisdiction to hear the appeal in the first place; the substantive question on whether Pistorius had the intention necessary for a murder conviction; and, if the court does find against the athlete, whether it can impose a new conviction or must it order a retrial. Neither prosecution nor defence are keen on a lengthy and expensive retrial, with Pistorius running out of money for further legal battles.

In his arguments, state prosecutor was highly critical of Judge Thokozila Masipa, who presided over the original trial. “The court ignored the most important circumstantial evidence,” he said, contending that this failure led to Masipa misconstruing Pistorius’ actions on the night in question. Nel also argued that Masipa was inconsistent in relying on Pistorius’ evidence when she had already dismissed him as an unreliable witness.

Barry Roux, advocate for Pistorius, tried to argue that these issues were questions of fact, rather than questions of law, and therefore not grounds for an appeal under South African law. The judges, however, interrupted him frequently: they were more interested in his interpretation of the concept of dolus eventualis, or indirect intention, which would form the crux of a potential murder charge. In layman’s terms, this is the argument over whether Pistorius foresaw the possibility that he might kill someone when he shot four bullets into a tiny bathroom, and whether he recklessly proceeded with his actions anyway.

“Did he believe he was entitled to shoot in those circumstances?” asked Justice Eric Leach, repeatedly, referring to the tiny dimensions of the bathroom in which Steenkamp died. “There was no place to hide,” he said.

For Roux, this question cannot be separated from Pistorius’ mental state, and his physical condition as a double leg amputee. “Bang bang bang bang. [Pistorius] fired shots in quick succession. He should have thought better. He should not have fired four shots. He should not have fired shots at all. But that does not explain what his mind is saying…Something must have happened in that man’s mind that forced him to fire and explains that…It’s unfair to see this through the prism of someone standing there with two legs,” said Roux in his closing statement.

The Supreme Court of Appeal reserved judgement until a later, unspecified date, although it is expected to come before the court recesses on December 1.

Legal analysts said that both sides made their case well, and that the outcome remains unpredictable. “A lot of people were focussing on how gruelling the interrogation on Roux was, and drawing an inference from that. But having one or two vocal judges doesn’t give you an indication into what the other three are thinking, and appeal procedures are always more active. Simply because they argue vociferously with one side, doesn’t mean they necessarily agree or disagree with that side. We can’t know where this stands right now,” said University of Cape Town law professor Kelly Phelps.

Oscar Pistorius did not attend the appeal. June Steenkamp, Reeva’s mother, was in the audience. She did not speak to media afterwards. Hagen Engler, a close friend of Reeva’s told the Guardian: “I believe in the SA justice system, overloaded and challenged as it is. So I have faith that judge Masipa applied her mind and reached the decision she felt was best. But however long Oscar serves doesn’t at all compensate for the loss of Reeva though. Nothing really could.” DM