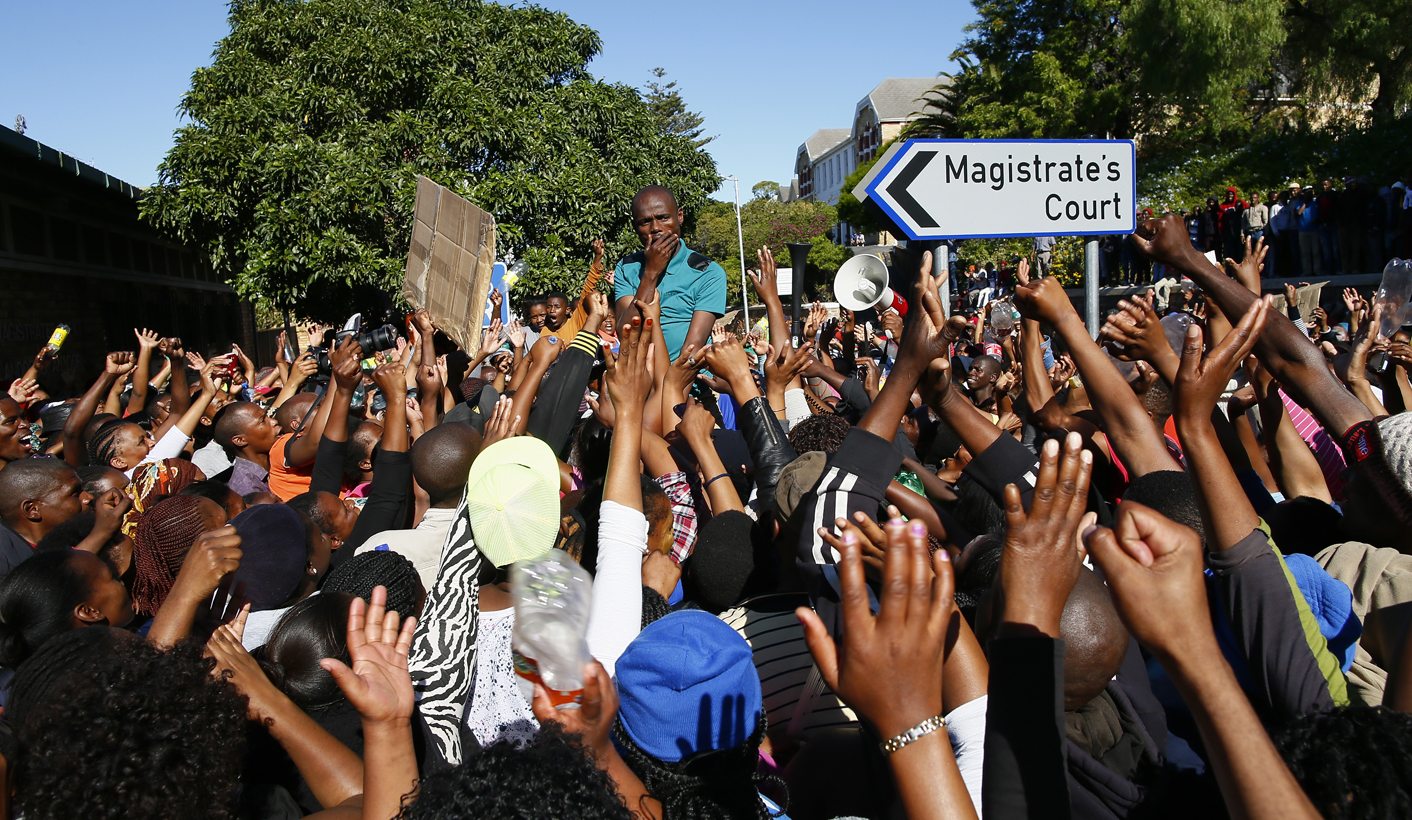 When Lubabalo Vellem walked out of court, on bail, he was lifted up by the crowd and cheered. He addressed the protesters, thanking them for their support. Vellem is accused of murder, assault, attempted murder, and of public violence, relating to the mob justice murder of one man, and the assault of another. By Thembela Ntongana for GROUNDUP.

Hundreds of Masiphumelele residents sang outside Simon’s Town Magistrates’ Court at the bail hearing of Lubabalo Vellem, a community activist. Vellem is accused of murder, assault, attempted murder and public violence, relating to the mob justice murder of a man on 15 September, and the assault of another man on 29 September. The bail hearing continued from Friday.

The defence opened its case today, disputing evidence that was provided by the investigating officer against Vellem on Friday. Vellem’s lawyer, Lennox Ntsimango, said his client had no previous arrests, no warrants of arrest and no pending cases. He also mentioned that the state of Vellem’s health was on its own an exceptional circumstance.

The state argued that the Masiphumelele community did not want Vellem back. It cited the fact that Vellem’s shack had been burnt down a few weeks ago. Ntsimango disputed claims by the investigating officer that the house had been burnt intentionally, pointing out that the officer failed to tell the court that 80 other shacks were burnt in the same fire. Ntsimango also pointed out that Vellem’s sister had testified that he could stay with her in Khayelitsha.

The defence also questioned the investigators’ identity parade, saying the investigator failed to convince the court that this was done to link the accused to the crimes. State prosecutor Gift Hina responded to the defence’s arguments by saying that when an accused, in this case, Vellem, is charged with the kinds of crimes he should be detained, unless there are exceptional circumstances. “The fact that he is working and has kids, is not out of the ordinary,” said Hina.

“Releasing the accused will encourage him and his group. We will be saying continue burning state cars,” said Hina, referring to one of the charges against Vellem.

Hina added that the defence had failed to prove that if the case went to trial Vellem would be found not guilty. There was argument as to where Vellem should be kept held until his next appearance, today, (Tuesday). Hina proposed that Vellem be removed from Mitchell’s Plain Police Station, where he has been held for the last two weeks, and be sent to Pollsmoor. “Everyone should be treated equally before the law because everyone that is arrested is kept in a correctional facility,” said Hina.

Magistrate Crystal Mckenna said that if Vellem stayed with his sister, in Khayelitsha, that would remove the state’s concerns about bail. She added that the state had failed to prove that if the accused was released, he would endanger the safety of the public. She emphasised that Vellem should be treated as innocent until proven guilty. She said the state had failed to show that Vellem should not be given bail. She granted bail under the following conditions: Vellem should not go to Masiphumelele. He must stay in Khayelitsha with his sister, and report to the police three days a week. Vellem was then released on R5,000 bail.

Four other accused, aged 18 to 38, were arrested on 23 October for their part in a protest that day. They were charged with public violence. They were released on bail of R500 each.

When Vellem walked out of court, he was lifted up by the crowd and cheered. He addressed the protesters, thanking them for their support. DM

Photo: South African community leader of Masiphumelele Lubabalo Vellem (C) reacts to a crowd of thousands of residents and some members of the greater south peninsula community as they cheer moments after he was released on bail, outside of the Simonstown Magistrates court in Cape Town, South Africa, 02 November 2015. Lubabalo Vellem who was arrested by police for allegedly being part of a vigilante group that killed suspected criminals has been released on bail. This follows weeks of protests over the lack of policing in the impoverished area and the alleged targetting of vigilante members by the police. EPA/NIC BOTHMA