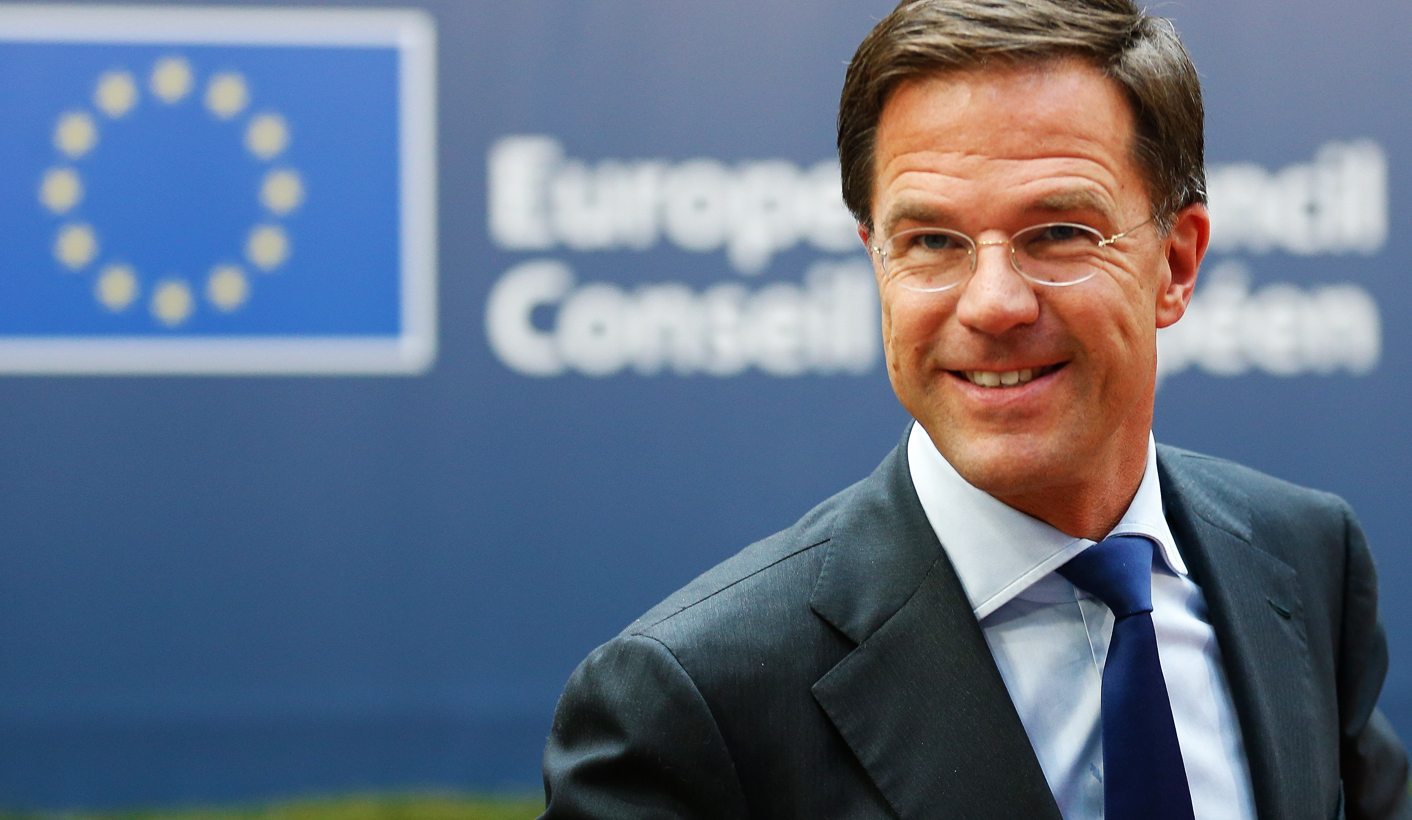 Jan van Riebeeck is not big in his homeland. Few people in The Netherlands seem to know who he is and his role in creating centuries of misery in South Africa. Even fewer people are aware he is blamed for the multiple failures and problems we have now, including by our president. Four centuries after “founding” the Cape Colony, the biggest Dutch trade mission is heading for South Africa, led by the country’s Prime Minister Mark Rutte. Rutte says the Dutch gave us the term “apartheid”, but they also gave us “anti-apartheid”. Now the Dutch are heading to South Africa on their second big voyage, hoping it works out better than the first. By RANJENI MUNUSAMY.

Dutch Prime Minister Mark Rutte rides his bicycle to work. Nobody quite knows if he has bodyguards who protect him en route to and from his office in The Hague because nobody has seen them. There is a story doing the rounds in the Netherlands that some tourists bumped into Rutte outside one of the old, majestic buildings that houses some government departments and asked him to take their picture. Because he moves around so inconspicuously, he is easily mistaken for an everyman. Apparently Rutte happily obliged to the tourists’ request.

So when Rutte arrives in South Africa later this month, he might find it unusual to be surrounded by the large security and protocol contingent that comes standard for visiting heads of state. Rutte will be meeting President Jacob Zuma, whom he says he spoken to on the phone several times and met face-to-face at the World Economic Forum in Davos earlier this year, as well as Deputy President Cyril Ramaphosa. But political relations are not the main aim of the visit. The talks with South Africa’s Number One and Number Two are mostly to grease the wheels for better trade relations and business partnerships.

In an interview with a group of South African journalists visiting the Netherlands last week, Rutte said his country would like to link closely with South Africa’s economic ambitions. Therefore over 65 Dutch companies would be accompanying him to South Africa hoping to forge deals in the agriculture, horticulture, water management, transport logistics, health care and energy sectors.

There is of course significant historical ties between South Africa and the Netherlands, most of which are not exactly bathed in glory. The initial Dutch settlement in the Cape was set up as a refreshment station between the Netherlands and the East Indies. Jan van Riebeeck was the commander of the Cape from 1652 to 1662, during which time the exploitation of the land and the indigenous Khoi people began. The Dutch settlers lay claim to the natural resources and began changing the environment to suit their needs.

According to Zuma, that is how “all the trouble began” when Van Riebeeck, the founding father of the Afrikaner population, landed in the Cape.

Funnily, the Dutch do not seem to be at all sentimental about Van Riebeeck or the Afrikaans language that derived from their own mother tongue. There are no monuments to speak of in the Netherlands that celebrate Van Riebeeck’s conquering legacy. In a week of travelling around the Netherlands, the only time I saw Van Riebeeck’s name was on a weather-beaten boat offering canal cruises in Amsterdam – not exactly the memorial you would expect for a person whose legacy still overshadows a nation’s progress four centuries later.

When asked about the Dutch ties to Afrikaans, Rutte said he had heard there were similarities but said he did not know much about the matter. He seemed to think the Afrikaans word for “tortoise” was similar to the Dutch term. It turns out it is not.

It could therefore be concluded that the Dutch are not interested in defending their colonial history or the language that sprouted from it, as much as some white Afrikaners feel obliged to.

The Dutch have done their homework on South Africa’s special needs. The trade delegation heading to South Africa has been designed to target those needs – water management, small business development, youth unemployment, drone technology to assist the fight against rhino poaching, and methods to develop the agriculture sector.

There are already 350 Dutch companies operating in South Africa, while about 20 local companies are active in the Netherlands. “That is an imbalance but both sides are doing a lot to correct it,” Rutte said. Some partnerships are already proving to be mutually beneficial. About 400,000 tonnes of South African citrus fruit are being exported to the Netherlands. South Africa is using the technology of a Dutch company, Delft Imaging Systems, to screen 300,000 prisoners for tuberculosis, the country’s biggest killer.

The South African government has been working with Dutch officials since 2004 on the Kingfisher project to establish water catchment management agencies. Water Affairs and Sanitation Minister Nomvula Mokonyane has been consulting with the world’s foremost water expert Henk Ovink on a new national water strategy for South Africa. Ovink, who is a special envoy on water affairs for the Dutch government, was also commissioned by US President Barack Obama to lead a task team to deal with the aftermath of Hurricane Sandy. Ovink will accompany Rutte on the visit to South Africa.

The need for an improved water management strategy is now more urgent with large parts of South Africa impacted by drought.

As with any diplomatic mission, Dutch officials are singing South Africa’s praises while treading carefully around the country’s problems. Rutte said he was aware of some of South Africa’s troubles such as high unemployment and the slow growth rate but the country had “enormous potential”. “South Africa is still the ‘S’ in Brics and I’m impressed with what you have accomplished.”

Investors wanted an independent judiciary and free press, adherence to the rule of law and protection of human rights, Rutte said. “These are big issues,” he said. “I’m glad not to be visiting a country where I have to persuade the president these things are necessary. It is all in place.”

But an issue that cannot be sidestepped is the consequences for South Africa’s image and human rights track record should it withdraw from the International Criminal Court (ICC). As the country that hosts the ICC, the Netherlands is not oblivious to the withdrawal threat following the legal wrangle over South Africa’s failure to act on an ICC arrest warrant for Sudanese President Omar al-Bashir.

The ANC’s decision at its recent national general council to withdraw from the ICC was based on accusations that the court was biased against African leaders and that it was toothless as it could not hold the most powerful nations of the world to account.

The ICC prosecutor last week ratcheted up the pressure on South Africa to submit a response to the court as to why it did not arrest Al-Bashir. A withdrawal from the ICC will not extricate Pretoria from the legal quagmire both domestically and at the ICC over the Al-Bashir matter. ICC officials said last week that if South Africa was found to have acted in violation of the Rome Statute, the matter could be referred to the United Nations Security Council.

Rutte said there was still “ample scope” for dialogue on the matter as South Africa was “still attached to the international legal order”.

Rutte has a point. African nations are the largest bloc in the ICC with 34 member states. If South Africa, backed by other African nations, raises issues about the functioning of the ICC, and gets support from other allies, the ICC would have to pay attention. If Pretoria simply backs out, other African nations may follow suit. That leaves these nations unprotected against genocide, war crimes and crimes against humanity.

As South Africa-Dutch partnerships will be showcased during the Prime Minister’s visit, there will no doubt be some words of advice uttered behind the scenes to ensure flourishing diplomatic and trade relations are not threatened. Both countries need to stay on the right side of history in the 21st century, although a dark past intertwines our destinies.

And perhaps this 2015 Dutch voyage will finally put Van Riebeeck to rest. DM

*Ranjeni Munusamy was part of a group of South African journalists that travelled to the Netherlands as guests of the Dutch government.