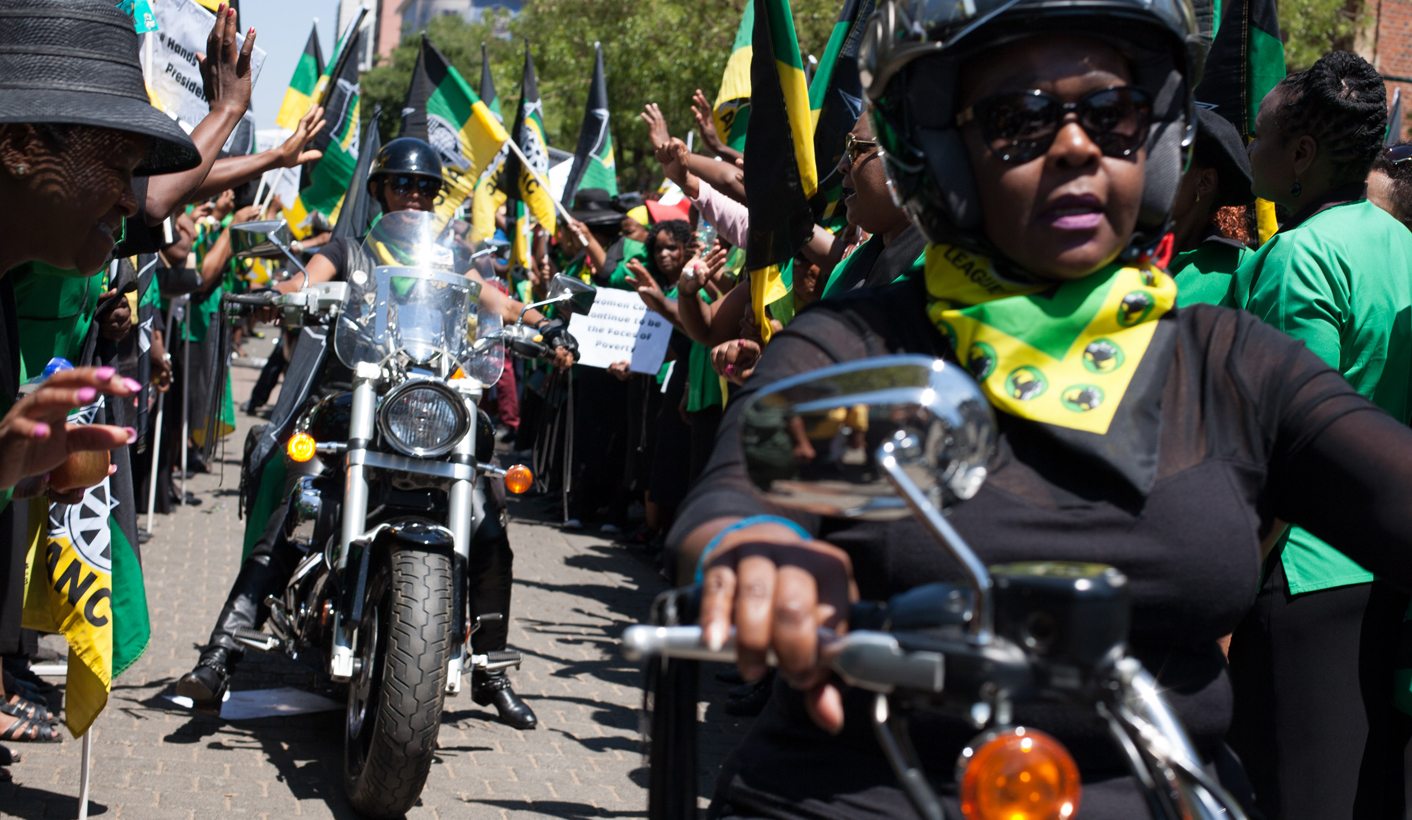 On Friday, the African National Congress Women's League (ANCWL) marched to the Union Buildings. Some women's issues were raised but it was ostensibly about defending President Jacob Zuma. Why? Because it's the ANCWL and elections are coming. By GREG NICOLSON.

At 11:30 on Friday, around 2,000 ANCWL members walked through two marble pillars, corner of Helen Joseph and Sisulu Streets, which honour the date “Pretoria” was established and named the capital of the Zuid Afrikaanse Republiek.

It was more parade than march. The ANC truck led the procession, a sure sign campaigns for 2016 local government elections have begun, followed by 10 women, wearing black, revving their motorbikes – theatrics, aspiration, and sheer force. Then came a marching band, the leader holding an (upside down) party flag the size of a bed sheet. Youth were under-represented in the crowd and the walk was steady.

“Dear God, please protect Parliament and all our leaders,” read one sign, with an image of the president giving a speech imposed in front of Parliament. “Radical transformation for women’s socio-economic rights,” read another with a quote from Charlotte Maxeke and #DefendTheRevolution.

During the first meeting of its recently-elected leadership, the Women’s League took a decision based on its resolutions that conceded the ANC is under attack and the organisation should take a central role in defending it.

“Women reaffirm the leadership of President Zuma as the champion of the revolution. The leadership of the  movement leading the National Democratic Revolution is represented by the face of its president, therefore, by virtue of this fact he is the human face of our revolution. The ANCWL, therefore, regards any attack on the president as an attack on the revolution and the organisation – the African National Congress,” said the ANCWL’s statement announcing its march. It threw in the celebration of Oliver Tambo (his birthday is in October) and some general issues affecting women.

Apart from “ANC will fall” scrawled on a Union Buildings, there were few marks of the students protest a week ago that featured skirmishes between cops and students. The only violence on Friday came from the oppressive heat and dust swept up from the well-marched lawn. “It’s because women are on the ground. We’re peaceful,” said a riot cop, flexing her muscles while posing for a picture.

It’s also because some of the students who protested at the Union Buildings last week were angry and determined to effect change. They came with specific grievances and were demanding the president help them achieve a decent future.

The ANCWL event was like visiting a friend who’s going through tough times, to show support, to be there for them. A huge stage had been set up in the gardens and tents erected for shade. Before ANCWL President Bathabile Dlamini addressed the crowd, there were a host of music and dance performances, including party staple Chomee, another sign the election has begun.

An early speaker led the chant, “Fees must…”

As if the march wasn’t confusing enough, multiple speakers linked the event to the student’s process.

“Don’t be intimidated by boys and girls who continue to fail woodwork with distinction,” ANC Youth League Deputy Secretary General Thandi Moraka told the crowd. A South African National Civil Organisation representative said the next march should be for #RapeMustFall (perhaps it should have been this march).

A speaker from the Black Business Council claimed she coined the phrase, “Hands off President Zuma”. It was at a rally the day after the Public Protector released her Nkandla report, she said, and she was livid because, “His dignity is being torn apart.” Not after this march, she claimed.

It’s the season of marches and the pointlessness of Friday’s event was stark as those on social media compared it to the protests for more equal education. The student protests, which have seen women lead and continue to assert themselves in male-dominated spaces, worked because they were rallying around something important that people can understand and connect with. Why didn’t the Women’s League march against gender-based violence, or for more women in executive and professional positions, or for free sanitary pads for school students, or for the legalisation of sex work, many were asking.

Addressing criticism that there are more important issues to focus on, Dlamini said detractors have “short memories”. “We are also leaders in our own right. We have a right to choose who to support,” she said. She mentioned the ANCWL’s action over the parole of Oscar Pistorius, decisions to fight gender-based violence, and plans to continue to oppose bail and parole for those who kill women. There’s a long way to go in fighting patriarchy, said Dlamini. For the ANCWL that fight is intrinsically linked to the president.

The memorandum presented to Minister in the Presidency Jeff Radebe was largely about defending the National Democratic Revolution and president and reiterating the ANCWL’s conference resolutions. The most tangible demands were for a review of domestic violence legislation, a review of parole boards, and harsher sentences for women and child abusers.

The demands on specific issues facing women were vague, but that wasn’t the point of Friday’s march. They could have marched to the department of justice or correctional services or lobbied ANC ministers on those points.

Friday’s event was about consolidating ANC supporters around the party and in particular President Zuma ahead of the 2016 elections.

Back at the pillars honouring Pretoria’s appointment as the ZAR capital, young women sat that afternoon talking to friends, shopping at the informal stalls. The ANCWL want to recruit young women but until they prioritise the patriarchal systems entrenched in the past and continuing in the present it hardly seems attractive. As as Dlamini illustrated on Friday, the party and president comes first, symbolic demonstrations like those around Oscar Pistorius second, and the real action third. DM