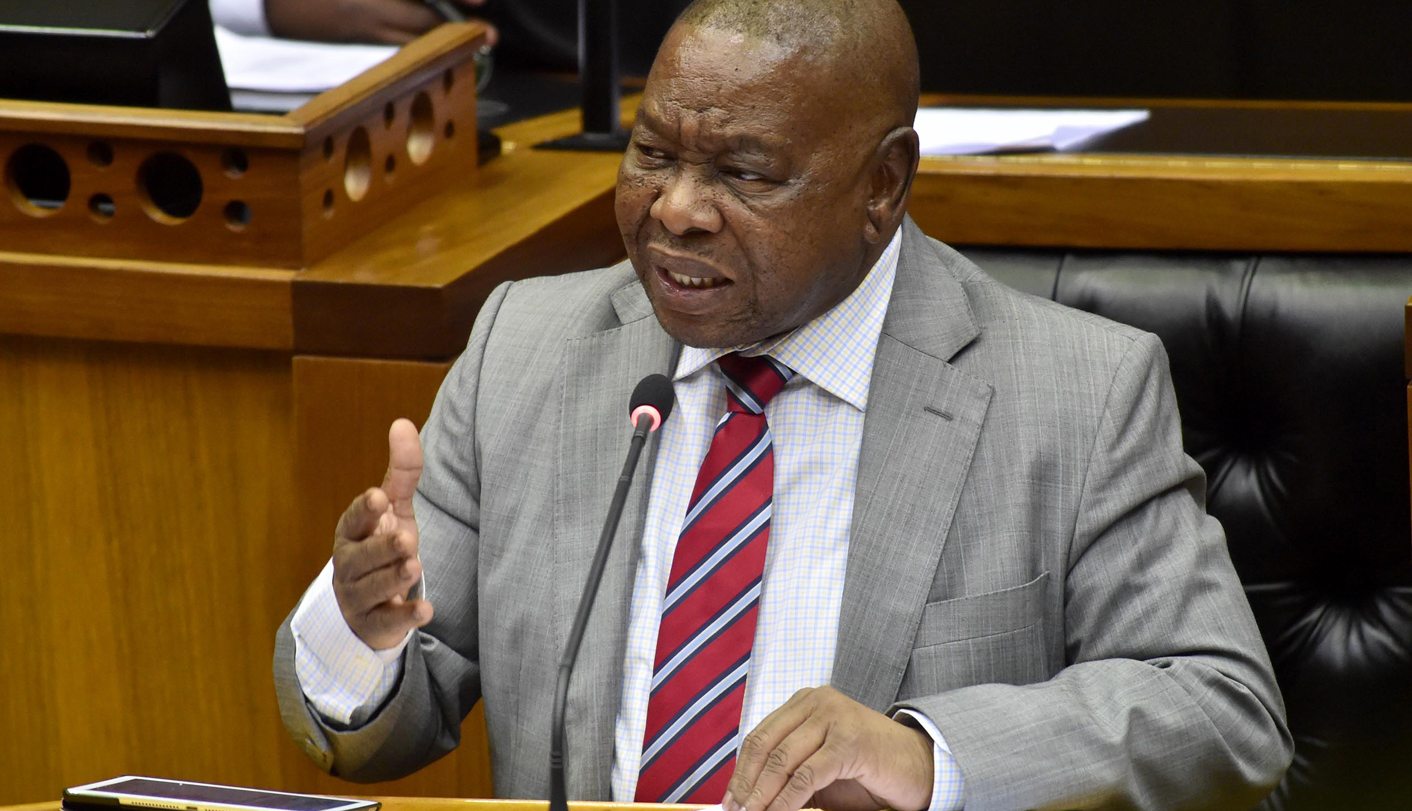 Over the past weeks, the Department of Higher Education has gone from being one of the least visible government departments to one of the most high pressured. On Wednesday, Minister Blade Nzimande was summoned to the portfolio committee on higher education and training to talk MPs through the implications of recent student protests. His deputy, meanwhile, commended police on having avoided another Marikana when dealing with protesting students. By REBECCA DAVIS.

Just a few days before the pawpaw would truly hit the fan when it came to student fees, the Honourable Blade Nzimande was in Durban, at the second Higher Education Transformation Summit. At said gathering, he told MPs on Wednesday: “Everyone accepted there is insufficient levels of student funding.”

In fact, so prescient were the resolutions of the summit that they could practically have been written retrospectively. The summit also concluded that there was a need for “further interrogation of the balance between institutional autonomy and public accountability” – an issue we’ve heard much of recently in the blame-shifting between the government and individual universities over the funding shortfall.

The summit resolved that the National Student Financial Aid Scheme (NSFAS) needed to be strengthened; that university environments should become less ‘alienating’; and that “the work to progressively introduce free quality education for the poor must be intensified and fast tracked”.

Well before the summit was held in October, Nzimande said, “there was a recognition that the system was facing dire financial challenges”. The students simply got a jump on the government and institutions by a few months, it seems; Nzimande specified that it was known that “there was the potential for widespread unrest at the beginning of 2016 if short-term solutions to the shortfall in funding for NSFAS-qualifying students” were not found.

If the government was well aware of this in advance, what did it do about it? Nzimande told Parliament he met with university vice-chancellors in February and raised the matter of fees. A ‘presidential task team’ has also been established, and was scheduled to report back by the end of November 2015.

When it came to the issue of the actual student protests, Nzimande’s presentation ran to just three slides, despite committee chairperson Pinky Phosa describing it as “elaborate”. Nzimande suggested that although “a number of burning issues” fuelled the student protests, the most significant of these were “underfunding of the university system in general” and “the demand for free higher education”.

With regards to the latter, Nzimande had a clarification to deliver to the country: When the government says its ultimate aim is to provide free tertiary education, it doesn’t mean for all.

“Government’s policy is free higher education for the poor, not for everyone,” Nzimande said. “Wealthy students must pay because they have an economic advantage.

“At the moment we are funding 16% of all undergraduates,” the minister said – some way off the target of 25%. But he also warned that it was not just university students who were in need of financial aid.

“We should be looking at resources for the post-school sector as a whole,” Nzimande said, pointing out that the country has a serious shortage of people skilled in various artisanal trades and occupations. “South African adults require a whole range of vocational-type adult education,” he said. “It is not just university students who are in need. There are unemployed youth who require one skill or another.”

As has been the case throughout the protests, Nzimande stressed the limits to his authority on tertiary institutions. “I don’t run universities on a day-to-day basis,” he said. “Fees are, as things stand now, the preserve of university councils.”

The Democratic Alliance’s Belinda Bozzoli took Nzimande on over this. If fees were the preserve of university councils, she asked, then how could the president announce a 0% fee increase for 2016? Nzimande replied that although President Jacob Zuma had announced the decision, it was not his decision “legally speaking”: the president had merely “brokered an agreement”.

The issue of where the additional money is going to come from to cover the fees shortfall was also touched on. “There is hardly anything we haven’t looked into in terms of getting money from outside my department,” Nzimande said. Underlining comments made in Parliament yesterday which seemed to point to the corporate sector as potentially being the future higher education cash cow, Nzimande said the NSFAS had been asked in the past to “go out and fundraise from the private sector”. Unfortunately, said Nzimande, “this has not really happened”.

The department’s deputy director-general, Diane Parker, told MPs there was a need to correct the public perception that universities were sitting on vast cash reserves. Where institutions do have financial reserves, portions thereof are often restricted – such as in the form of endowments for specific scholarships. Other universities simply have “very very low reserves”. For this reason, Parker said, the notion that university reserves could simply be raided for funding was not a solution.

Parker also said the department was aware of the issue of the “missing middle”, which has received attention during the student protests: students whose families are too well-off to qualify for NSFAS aid, but too poor to pay university fees. Nzimande had instructed the NSFAS to put forward a proposal dealing specifically with this, she said.

As was the case with Tuesday’s parliamentary debate, the sense of urgency outside the room – with the University of the Witwatersrand (Wits) students continuing to clash with police – didn’t seem to be matched inside the room.

Nzimande urged students to go back to class, calling on parents to also crack the whip in this regard. He said that student leadership at Wits had “assured” him that they intended to return to class on Wednesday. Parker confirmed that the department had urged universities not to press charges against students who had not committed acts of violence, but had been arrested simply for being in violation of interdicts taken out by the institutions to prevent disruptions to education.

The destruction of property, Parker said, “will have to be dealt with through normal disciplinary processes”.

Dealing with the issue of police responses to students, Phosa (an African National Congress MP) suggested that police should be encouraged to use water cannons in such situations rather than tear gas or rubber bullets.

Higher Education Deputy Minister Mduduzi Manana stepped in at this point, seeking to congratulate police on their handling of the student protests.

Manana said he wanted to “commend” the police, because if they had not acted with restraint “we would be sitting here with another Marikana”. He added: “There is no doubt that they were provoked”.

Welcome to the new normal, folks: where police deserve to be congratulated in Parliament for not having massacred protesters. DM