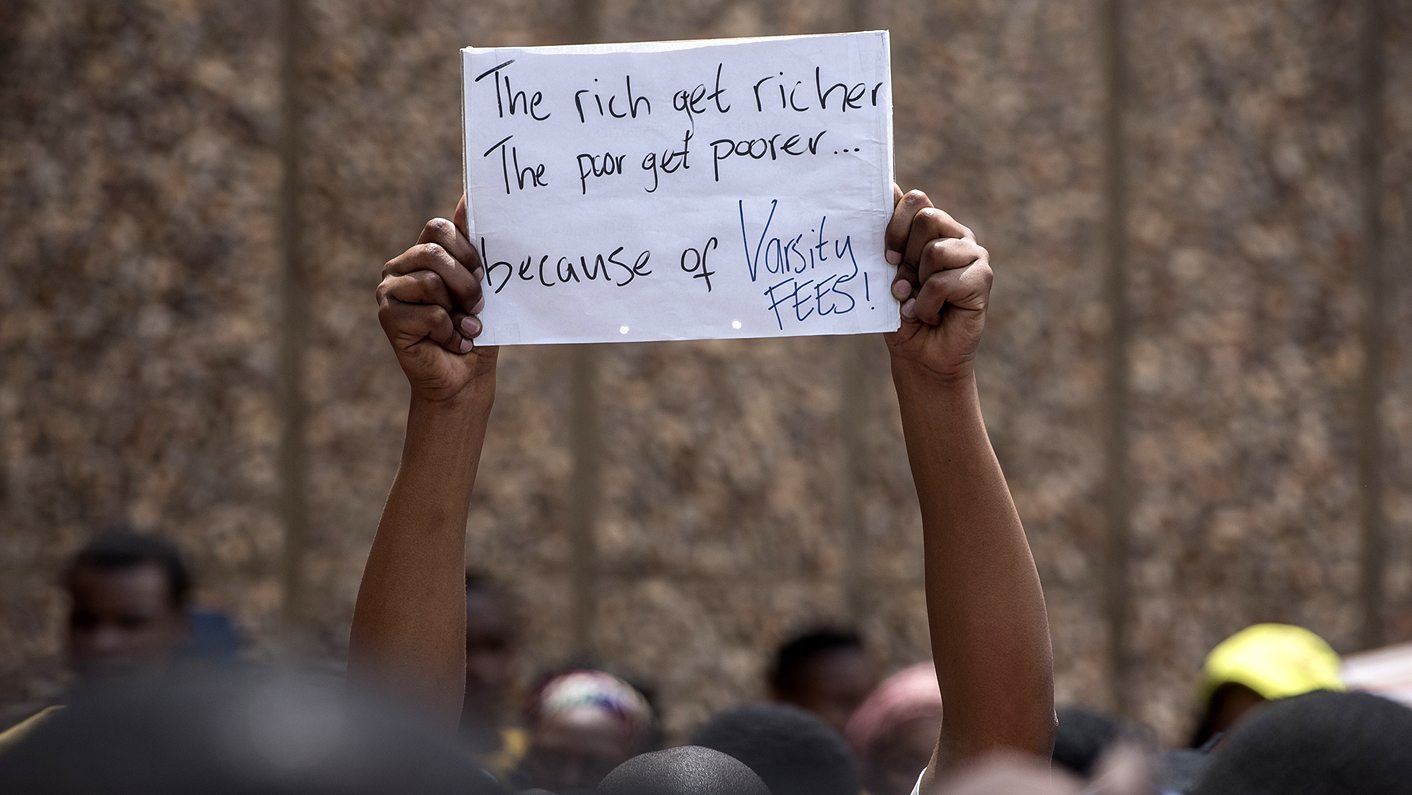 It was a busy day of negotiations across campuses, where protesters achieved some of the objectives they set out to achieve through the #FeesMustFall movement. But the victories were marred by violence, with the University of the Witwatersrand being the worst hit by the instability. And where do we stand now? By MARELISE VAN DER MERWE.

By a little after dawn, a large crowd of University of Cape Town (UCT) students and workers had already gathered on campus, at what protesters have renamed Azania House (Bremner administration building). During the day, the campus was packed with protesters, and the day was to prove largely victorious for the #FeesMustFall movement.

The university also made a commitment to end outsourcing despite the “significant costs involved”. The caveat, however, was that the university must be allowed to return to full capacity.

Rhodes Must Fall (RMF) stated on its Twitter timeline that outsourcing would be a thing of the past within six months, although UCT vice-chancellor Max Price told media the implementation and time frames would still take some discussion with all stakeholders. In fact, he said insourcing would be investigated, rather than implemented, over the next six months.

Most protesters expressed elation at the news, with responses ranging from “Wow! No words!” to “History has been made”.

“The support is incredible,” another said.

One protester, however, was more circumspect, saying it was a victory to end outsourcing, but expressing concern that it might result in retrenchments.

“We must celebrate, but never be complacent; the university [might] retrench some workers. We must be vigilant against that. Labour brokers must fall everywhere,” he said.

On the Rhodes Must Fall Facebook page, some of the outsourced workers expressed their gratitude for the outcome. The movement itself assured members more was to come: “2015 will be a year that goes down in history as the year of our inception,” it said in an announcement. “It marked the rebirth of radical student politics. The fall of Rhodes. The week universities nationwide were shut down by students. And the year outsourcing ended.

“While the details have yet to be ironed out, and we await the workers’ leadership on where to from here – we recognise this as a milestone for those who have dedicated themselves to this struggle.

Meanwhile, the student collective that had aimed to arrange a “protest and pass” academic caucus at the university said they were forced to cancel it for the second time after hearing rumours that RMF would disrupt it. On Tuesday, they had told Daily Maverick they feared intimidation and were obliged to move the caucus to Wednesday; on Wednesday, it was moved again. The caucus was intended to provide students with a safe space in which they could study and connect with academics and tutors in between protests, they told Daily Maverick late on Monday night. RMF’s Chumani Maxwele, however, said on Wednesday that he knew nothing of the matter or of the caucus, but acknowledged that there was division among the student bodies. He told the Cape Argus there were “bruised egos” involved.

Elsewhere in the Cape, students were still divided over whether to return to campus and write exams or to continue to push for a national shutdown. The @UWCStudent Twitter account received a tentative message early in the morning asking whether it was safe to approach campus to study; later it emerged that protesters had demarcated certain areas for study purposes and had also arranged a residence clean-up following protest action. At the Cape Peninsula University of Technology, some of the more moderate students were expressing disillusionment with continued protests as the campus announced it would remain shut on Wednesday and Thursday after continued protests on Tuesday, in which campus property was damaged. Students and staff had reached a resolution after negotiating, but were later chased out of buildings when another group began a fresh wave of protests. On Wednesday, it was announced that negotiations would continue on Thursday via a group of five delegated students.

At the University of the Free State, as at UCT, negotiations achieved a modicum of success when vice-chancellor Jonathan Jansen addressed hundreds of students, although some were reportedly disappointed that there were not more dramatic changes. Jansen promised to do everything in his power to assist students who could not afford tuition fees.

Regarding the removal of the CR Swart and MT Steyn statues, which students had requested, Jansen asked the Student Representative Council (SRC) to deliver a proposal arguing in detail for the removal of the statues. The proposal would be taken to the council, he said. He added that the children of outsourced workers could study for free at the university.

The South African Students’ Congress (Sasco) had on Tuesday called for a national go-slow to enable students across the country to write their exams and attain their qualifications. “We appeal to all our structures to continue to struggle for their aims without being captured by forces of reaction that are hell-bent on weakening the student movement and totally collapsing our universities. It is important that we guard against these wedge-drivers and agent provocateurs,” Sasco national executive committee president Ntuthuko Makhombothi said in a statement.

“The organisation is currently busy engaging all its structures about the way forward on its call for a national shutdown … During this period, we are calling for a go-slow on the national shutdown. We are very committed to the resumption of the academic programme and ensuring that students are given time to prepare and write their examinations.”

Makhombothi added that the Economic Freedom Fighters’ (EFF’s) demand for companies listed on the Johannesburg Stock Exchange to each sponsor 100 students would not go far enough. Makhombothi told reporters that this would amount to only R2.8-billion in funding, which would not cover the shortfall in tertiary education. “The president himself has made this statement that free education is possible. We are calling on the private sector to heed the call and fund education,” he said.

There was also an unexpected addition to the protests, in the form of AfriForum, which announced three new protests coming up, notably against the revision of language policy at the University of Pretoria (UP). “In practice, Afrikaner students do not have the same freedom as their fellow students,” spokesperson Ian Cameron said. “Today’s Afrikaner students played no part in apartheid, yet they bear the brunt of policies aimed at redressing the effects of that system. In this regard, the discriminatory effects of race-based acceptance quotas, race-based financial assistance and the denial of mother-tongue education are the instruments that government and universities use against us. AfriForum Youth will hand over a memorandum to the UP management next week in which the organisation will demand that Afrikaans enjoys equal treatment to English.”

However, it was again Wits that drew the shortest straw. Severe violence broke out, with a bookstore and two vehicles having been set on fire overnight and a photojournalist from The Star being assaulted. Chris Collingridge was sworn at and told to leave in no uncertain terms by protesters before being punched in the face and pelted with stones as protesters objected to the university’s decision to reopen. Collingridge’s experience is extreme in degree but not unusual in flavour; on several campuses, it is becoming increasingly difficult for media to gain access.

During the day, EFF North West University SRC president Linda Mabengwane was arrested, but was later released. The university said in a statement that it would take legal action against those responsible for the violence and damage to property. Several students responded with dismay on social media at seeing books burning, complaining that it was contrary to the principle of fighting for education.

Meanwhile, in Parliament, Higher Education Deputy Minister Mduduzi Manana said the police should be “commended” for having avoided another Marikana at the Union Buildings and that they had “exercised serious restraint”. Higher Education Minister Blade Nzimande added that the goal was not free higher education for everyone, but for the poor.

So where does this leave us? Perhaps such statements are intended to calm the protests, but they are more likely to inflame them. Meanwhile, fractures in the student body – and leadership – continue to deepen, with protesters becoming increasingly vocal about their differences. And, while the protests around tertiary education continue, the crisis around primary and secondary education falls by the wayside: hundreds of thousands of school pupils’ education is interrupted daily by a host of socioeconomic and management issues, which has a direct and measurable impact on tertiary education. Where will this movement go from here? A national shutdown? Moves to correct shortfalls at all levels of education? Or a total disintegration of the movement owing to infighting?

The most effective solution, but certainly not the quickest, would be to root out corruption and mismanagement. Writer Tom Eaton pointed out that the North West employs 36,000 ‘ghosts’ which cost the province R19-billion in salaries; South Africa has reportedly wasted in the region of R700-billion in corruption since the dawn of democracy. Public Protector Thuli Madonsela said during an address at the University of South Africa earlier this week that a lack of ethics lay at the root of the protests, as well as poor fund management. “In terms of what is happening with our students, I believe there is a link between unethical conduct in government and corruption. We’re not a poor country. Most Southern African Development Community countries offer free education, so it really is a question of South Africa prioritising education and doing so in an ethical way,” she said.

She also took issue with expenditure on what she believed were secondary issues, for example, the renaming of streets and landmarks. “If you change a name that’s not offensive, then what law are you implementing? So what about the money that goes into this process? This money could have gone to education,” she added.

But an overhaul cannot occur overnight. It seems clear, at this point, that although a more moderate faction of students have either opted for a go-slow during exams or opted to stop protesting now that primary objectives have been met, the country is in for continued protests from at least some bodies within the #FeesMustFall movement, primarily the more radical RMF.

In the meantime, it’s worth understanding just some of the numbers involved:

If you add them up, the answer is clear: discontent is here to stay for a while. DM

Photo: Some of the thousands of students from Tshwane University of Technology demonstrate during another day of demonstrations against fee increases at their university, in Pretoria, South Africa, 21 October 2015. EPA/SHIRAAZ MOHAMED.