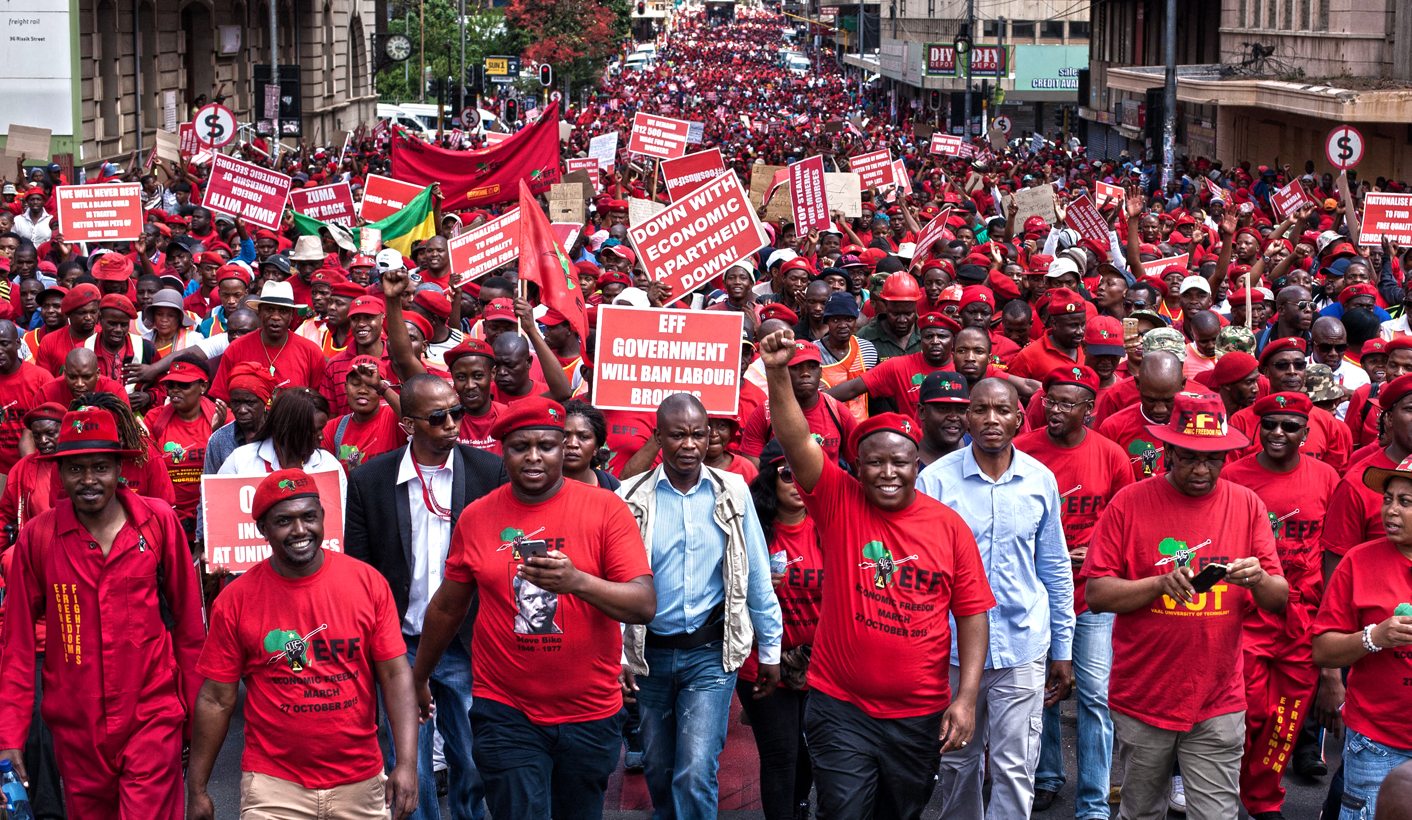 Tuesday's Economic Freedom Fighters march was the perfect opening to the party's 2016 election campaign. The numbers were huge, the demonstration peaceful, and the Johannesburg Stock Exchange provided material for a speech from Julius Malema on the discrimination and inequalities suffered by black South Africans. Expect more marches. By GREG NICOLSON.

Julius Malema marched 20 kilometres with 50,000 people and turned left into Maude Street, Sandton. Behind him were stops at the Reserve Bank and the Chamber of Mines and a rest at the US Embassy. Maude Street is home to the Johannesburg Stock Exchange (JSE), centre of the centre of the South African economy. He found a stage set up 500 metres from the JSE. Cages of temporary wire fencing blocked Maude Street from the 50,000.

Tuesday’s mass march effectively began the Economic Freedom Fighters’ (EFF’s) 2016 election campaign and the JSE provided a perfect conclusion for the party. White minority capital had blocked a peaceful, black demonstration with legal permission to go to the JSE, not 500 metres away. Malema made the most of it.

That morning, EFF spokesperson Mbuyiseni Ndlozi had sung over Newtown’s Mary Fitzgerald Square: “Frooom Caaaaaape to Caaairoo …” Azania. Azania. Marshals in black slacks, white shirts and ties stood by the water supply. Around 2,000 supporters moved forward to hear Ndlozi sing. Others ate in Newtown Junction’s courtyard, milled about outside the supermarket on Ntemi Piliso or stood chatting on the surrounding blocks.

Officially, the march was for economic freedom. Since Malema and his crew revived the call (to be achieved in our lifetime) anyone who’s worn a red, yellow, or even blue shirt can rally around it. It’s come to mean everything and nothing, but when the commander-in-chief addressed the crowd he made it clear: the target of the march was white minority capital.

“Capitalism sucks,” read one placard. Another, bypassing the text, featured Ayanda Mabulu’s Pornography of Power, which, in the artist’s words, is “talking about being fucked”. A more, maybe less, direct sign said, “Middle-class is over-taxed!!! Life is unaffordable”, before listing the price of bread, milk, water and petrol.

“Your days are numbered. We are going to warn them,” Malema warned wealthy business interests on Tuesday morning before leading the crowd around the corner to the Reserve Bank.

There the party handed over a list of 23 demands. These included that the bank’s private shareholders concede their stakes without compensation, that interest rates be cut, that inflation targeting be abandoned, that the development of a new state bank and the creation of an agricultural bank be facilitated, and that “with immediate effect all the monies and gold that was stolen before 1994 elections” be recovered. (The crowd erupted for that one.)

Some EFF members dashed down Main Street, past Anglo American’s headquarters, built in 1939, on their way to the Chamber of Mines. There they made 21 demands, including nationalisation – “the state should own and control a minimum of 60% of South Africa’s mines without compensation” – a minimum wage of R12,500, a moratorium on mining retrenchments, 60% local beneficiation, and an increase in the use of local goods and services in the mining value chain.

The number of marchers was growing.

“We’re done! We’re done!” Ndlozi smiled as the march moved north on Rissik Street. The crowd continued to flow around the corner until the corner wasn’t visible. “As far as the eye could see,” is the apt cliché to describe the numbers. “We’re not running a Mickey Mouse organisation. We are serious. The DA (Democratic Alliance) must do this,” the spokesperson continued. He wasn’t hoping the official opposition would match the EFF’s march; he was claiming the EFF’s legitimacy as the real opposition.

“We are sharpening the contradictions in society in the interests of entrenching revolutionary consciousness. Our people in their tens of thousands have pitched up for a march that seeks economic emancipation. The enemies and the authorities are warned. This is the EFF. It is truly born,” Ndlozi said as EFF supporters passed under Oxford Road’s Jacaranda trees.

“The revolutionary demand of economic emancipation in our lifetime is truly here,” Ndlozi continued, noting that it’s the start of the party’s 2016 local election campaign. He said that not only has there been an “explosion” in the student movement, but in the workers’ movement as well – note the Congress of South African Trade Unions’ fracture. “You have to confront the economic emancipation question … The country has entered into the heart of a revolutionary situation and we’ll emerge as a choice of the people when that choice happens,” he claimed.

“Move! Move!” shouted the front-line marshals to anything, anyone, in their way. For a day, the roads were theirs.

So when Malema led the march into the Maude Street barricades, he simply pointed towards the JSE. It took seconds: the party’s security, the size of Springboks, and supporters wrestled with the wire fences and the EFF leadership led 50,00 people into a street filled with police and guards with dogs. The commander-in-chief controlled the front of the march and, for the first time, he scowled.

“We want to warn you, bokke, we don’t have time for boys, we don’t have time for white boys. You lock us here – we asked for permission to come here. We got permission to come here. We’re not here illegally but you treat us like criminals because we are black. You hate black people,” Malema said, pointing at those watching from behind police and fences at the JSE. “You don’t want them to march to you. JSE is racist whites. Your days are numbered here. We are not Nelson Mandela who preaches reconciliation at the expense of our people. You will get reconciliation if you show remorse.

“Without remorse we will never subject ourselves to a nonsense reconciliation which perpetuates white supremacy. You are not going to stop me from coming here. No one. Not police, not white security guards. Only death will stop us from coming here. Stop treating people like that. We came here legally.

“I’m not scared of whites,” Malema continued, while condemning the police for helping to close the street. “I will never be told by the white man how to conduct business in this country. Police stop being scared of white people.”

Under a painting of her leader, an EFF supporter yelled: “They must go! They must go back to Europe!”

The memorandum was presented and JSE chief executive officer Nicky Newton-King thanked the crowd. After Malema’s speech, the demands for employee ownership, banning labour brokers, and using the JSE as companies’ primary listing seemed bureaucratic. But 100 metres away, a woman sat in the gutter with her small child and cheered when she heard the demand for petrol workers to be paid R5,000 a month.

Main photo: Police estimate there were 50,000 people on Tuesday’s march, making it the largest in recent local history. (Greg Nicolson)