Where poverty meets xenophobia: Grahamstown, a city in crisis 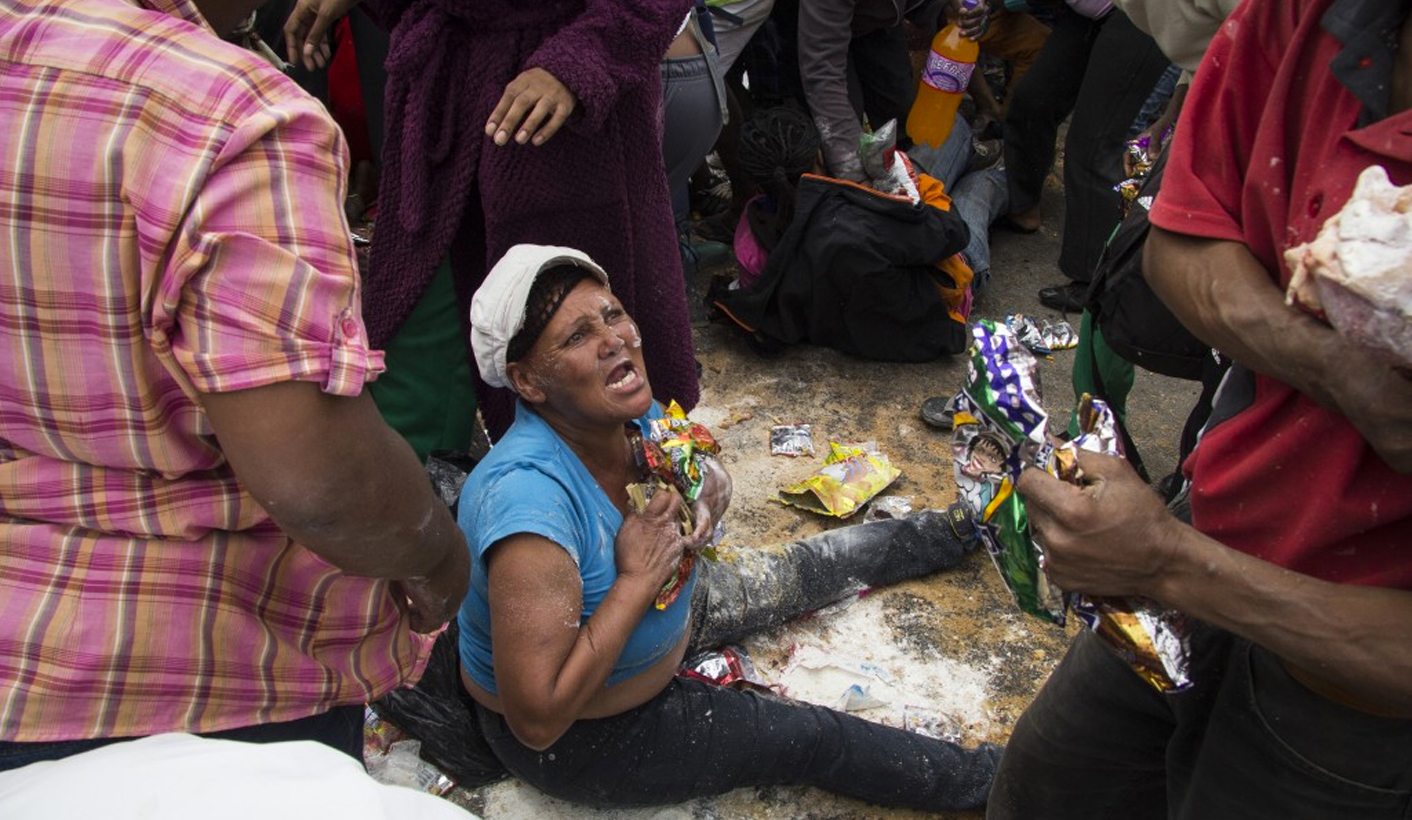 Five hundred people have been directly affected by xenophobic attacks in Grahamstown. Men have been evacuated from town for their safety while their wives and children remain behind, not confident that police will protect them. None of them have food, or the money to buy it. And the actions of some police officers and the xenophobic stances of some local politicians have exacerbated the problems. By PADDY O’HALLORAN.

In Grahamstown, the student-led shutdown of Rhodes University that began a week ago has ended. Apart from the remnants of barricades, the cardboard placards used during protests last week that welcome visitors to campus, and some blackened patches of road where tires recently burned, the western end of Grahamstown around the university are calm.

The same cannot be said of the rest of Grahamstown. Along Beaufort Street, the main route through town, shops are shut and locked. In the township, some shops were burned during an outbreak of xenophobic looting that began last Wednesday and continued through the weekend.

The shops targeted shops are owned by Bangladeshi, Pakistani, Ethiopian, Somali, Nigerian, Malawian, Zimbabwean, Egyptian, Senegalese, Sudanese, Zimbabwean, Palestinian, and Chinese residents of Grahamstown. They are mostly Muslim, because of rumours that an “Arab man with a beard” was guilty of committing several murders and mutilations in recent months. Some 300 shops have been entirely emptied, the owners displaced, and they and their families left with nothing — only, they keep saying, the clothes on their backs. Threats continue to be made against them, and rumours are still spreading that encourage the violence and looting.

Given the emergency in Grahamstown, it is crucial to state that the South African Police Service (SAPS) stated publicly on Monday that “there are no serial killers in Grahamstown”, no mutilated bodies have been discovered, “no foreigner is a suspect or has been arrested in connection with the bodies found”, and “there is no link between foreign nationals in Grahamstown and the deaths being investigated”.

The SAPS statement, circulated five days after the looting began, is deplorably late, especially given the ongoing crisis in Grahamstown and the opportunity the police had to prevent the violence.

As of Sunday night, the looting continued. Five hundred people have been directly affected by the attacks. Families are divided as men have been evacuated from town for their safety while their wives and children remain behind, not confident that police will protect them. None of them have food, or the money to buy it. They are wearing borrowed clothes. They have been robbed of everything, even their passports.

Meanwhile, in a meeting convened at City Hall, Makana Municipality officials, including the mayor and the acting municipal manager, advised assembled community members that the municipality and the police would take the lead in resolving the crisis. The affected people are still awaiting food donations and an end to looting.

At the same meeting, councillor M Booysen (Democratic Alliance) argued that when the ‘foreigners’ come back to town, they should have fewer shops, and that businesses should rather be reserved for local people. This suggestion blatantly accepts xenophobic sentiments and justifies the attacks. Another councillor, M Matyumza (African National Congress) is reported to have told a group of people on Thursday evening that, indeed, the ‘foreigners’ would go, clearly supporting the criminal and inhumane activity of the past few days.

The actions of some SAPS officers have also aggravated the problems. Shop owners experienced SAPS officers bringing people to safety before announcing to crowds that they could go in and loot. One woman, whose shop had been emptied, asked how this could mean ‘safety’; although she is alive, she now has nothing on which to live. Other people witnessed police removing goods from a shop and leaving them in the street to be taken.

We have to ask: How do these actions demonstrate the municipality’s and the SAPS’s leadership in calming the Grahamstown community and in solving its immediate humanitarian and political crisis? We must recall other recent events in which the state was implicated in xenophobic violence: when the SAPS fired rubber bullets at marchers in an anti-xenophobia march organised by Abahlali baseMjondolo in Durban last April, and Operation Fiela in July, when police and army units broke down doors across South Africa in search of ‘foreigners’.

Taking an utterly different approach, and demonstrating real leadership, local activists have been working to preserve their community. The Unemployed People’s Movement (UPM), the Rural People’s Movement, and local nongovernmental organisation Masifunde organised a meeting of a diverse group of Grahamstown organisations and residents on Thursday morning. They have been working to calm the community, to dispel the xenophobic rumours, and to provide food and other basic necessities to the affected families. UPM members have disseminated hundreds of flyers condemning both the murders and the looting and offering the message that the so-called ‘foreigners’, many of whom are South African citizens, are an important part of the community, that they face the same daily struggles as everyone else. On Tuesday they will go to local schools to reach young people, many of whom have participated in the looting. With no resources, they have confronted the crisis both politically and practically.

Grahamstown is a place of intense inequality and daily suffering. Indeed, even apart from the looting of the past week, it could be called a town in crisis. Some two-thirds of the people are unemployed. In discussions with residents, UPM members heard of two trends. “We heard about the rumours, and we heard frustration,” one UPM activist said. While not justifiable, the xenophobic looting cannot be divorced from the frustrations of many people living in Grahamstown that are partially driven by a corrupt municipality. In the present crisis, the actions of the municipal authorities and the xenophobic stances of some local politicians have exacerbated the problems. There is a political crisis in Makana Municipality that cannot cope with either the mobilisations of residents for dignity and better living conditions or the mobilisation of xenophobic, exclusionary violence.

Immediate action is required by government – local, provincial, and national – to provide for those whose livelihoods have been stolen off of their shelves and to take a principled political and active stance against xenophobia. If violence is to end and not recur, then the political crisis in Makana Municipality must also be addressed. Politics is required that does not, in the words of one woman affected by the looting, count people as “worth less than a packet of chips”. DM

Photo: A woman clutches food she grabbed off the ground in Albany Road after police offered some of the stock of a shop to disperse awaiting crowds peacefully. Much of the food was trampled in the chaos. IMAGE: Jeffrey Stretton-Bell for The Oppidan Press.