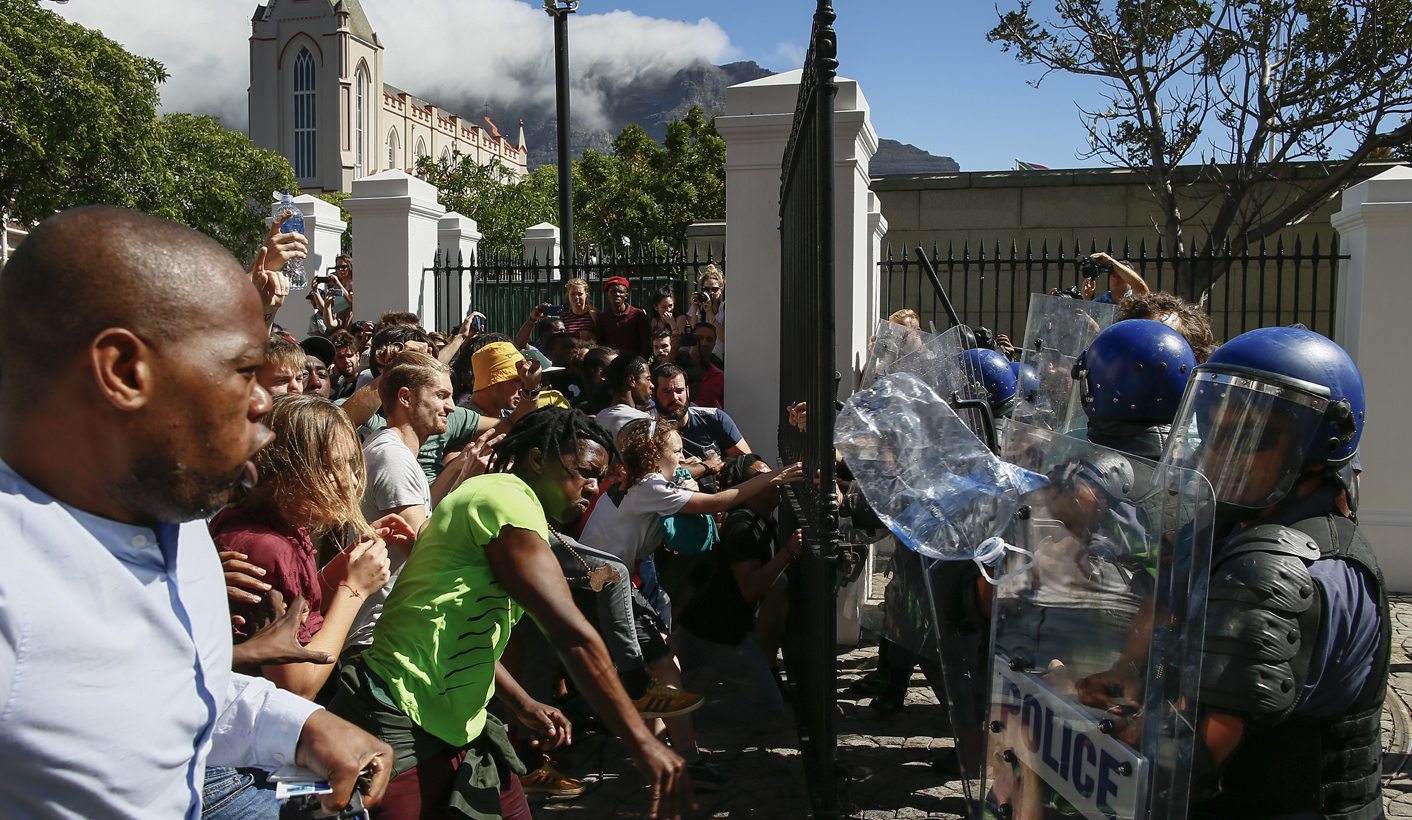 During Tuesday’s Parliamentary debate on the crisis of funding for higher education, politicians fell over themselves to congratulate students on their #FeesMustFall protest, while there was far more reluctance to take ownership of the fees protest. Instead, MPs from the ruling party seemed bent on placing the responsibility for fees on universities. By REBECCA DAVIS.

Which South African political party is most in favour of students’ protests over fees? It was hard to tell in Parliament on Tuesday, where MPs vied to outdo each other in support of the students. The irony, of course, is that the students themselves have been at best indifferent to political involvement – having booed senior figures from the African National Congress (ANC), Democratic Alliance (DA) and Economic Freedom Fighters (EFF) over the past week.

Higher Education Minister Blade Nzimande gave a speech which seemed out of tune with the urgency of the students’ protests. He attributed the current fees situation to the ANC being a “victim of its own success” in having brought more young people to higher education than the system could deal with. There was a self-congratulatory air to Nzimande’s proclamations, and he stated that the ANC was “the only ones who know the problems”.

Nzimande’s speech was continually heckled by EFF MPs, though the majority of the Fighters’ caucus was absent, marching to banks and the Johannesburg Stock Exchange in Gauteng. EFF MPs shouted that the minister was failing to deal with the fact that what students wanted was free education, not just a halt in the fee increase for 2016.

Nzimande denied that he had been absent over the crucial period of the last week, saying he had held meetings with university vice-chancellors, students and other stakeholders on the issue of fees. He said different government sectors were working out what financial contribution would be made by each, and that an announcement would be made on Thursday after a meeting with President Jacob Zuma.

The higher education minister gave one of the clearest indications to date that the sources for additional funding for higher education are likely to come from the private sector and additional taxation. When it comes to taxing the rich, Nzimande said, “none of us must develop cold feet”.

The ANC’s Nomalungelo Gina sought to put pressure about university functions back on the institutions themselves, claiming that individual universities have been using their autonomy from government as a shield against addressing transformation. Gina drew attention once more to the issue of Afrikaans-language tuition at Stellenbosch.

When the DA’s Mmusi Maimane rose to speak, DA chief whip John Steenhuisen claimed that one of the EFF’s “Teletubbies” (a reference to the British children’s television show of the same name) had called him a “sellout”. The EFF’s Mmabatho Mokause subsequently objected to the term “Teletubby”. Speaker Baleka Mbete did not seem in the mood to indulge EFF interruptions, however, saying: “I know you discussed to disrupt the House.”

Maimane sought to draw parallels between the 1976 student uprising against the apartheid government and the recent student protests, drawing cries of outrage from the ANC caucus. Maimane also drew attention to the “missing middle”: those students whose parents earn too much to qualify for automatic financial assistance but too little to provide financial aid. A 0% cap on tuition increases, Maimane said, “does not change their circumstances”. The DA leader drew unflattering comparisons with the amount spent by the ruling party on aspects such as VIP protection.

Small Business Minister Lindiwe Zulu interrupted Maimaine’s speech to ask if it was true that the DA leader had been chased off campuses by students last week. “Where was Minister Zulu when the campuses were burning?” retorted Maimane, who concluded his speech by amending the student hashtag #FeesMustFall to #ANCMustFall.

Mokause pointed out that the EFF were one of the few political parties to have included free tertiary education in their manifesto from the start. “Fees have not fallen,” she said. Mokause also said that the EFF have consistently maintained that higher corporate taxes should be used to pay for higher education. She proposed that the ANC needed to address the issue of tax avoidance, and shelve the nuclear build programme, in order to free up additional funds. Addressing Nzimande, Mokause suggested that the ANC’s report on the feasibility of free higher education was hiding in his “alcohol cupboard”.

MPs from the Inkatha Freedom Party, National Freedom Party and United Democratic Movement likewise took both the government and universities to task for not having done enough to transform the profile of higher education.

The Freedom Front Plus’s Pieter Mulder promised that “the chickens are coming home to roost,” pointing out that the ANC has been pledging free higher education for some years.

“[Blade] Nzimande has agitated for 20 years for a popular revolution,” Mulder said, in reference to the student protests. “When it arrived, he was on the wrong side of it.”

ANC MP Bongani Mkongi gave possibly the most bizarre defence of the ruling party’s higher education policy, suggesting that troublesome elements among the student protests were funded by both rival political parties and foreign countries. He did not expand on which foreign nations might be doing the funding.

The DA’s shadow higher education minister, Belinda Bozzoli, a former University of the Witwatersrand deputy vice-chancellor, described the student protests as a “breath of fresh air” and suggested that independent entities were “disgusted” at the assault on higher education.

Bozzoli invoked the past for the second time for the DA during the debate when she compared attacks on higher education to those from erstwhile higher education minister FW de Klerk in 1982. Bozzoli said that what the ANC had done to universities during its period of governance was comparable to what the ruling party had done to Eskom, pointing to the fact that university funding had fallen by 30%.

Higher Education Deputy Minister Mduduzi Manana – the youngest member of the Cabinet at just 32 – made for a calm and assured penultimate speaker in the debate. He, like the DA, compared the student protests to those of 1976 in terms of the bravery of young people, but he also condemned the “criminal” actions of a small number of the youth during the protests. Manana reiterated the commitment of the ANC to the notion of an education tax funded by the corporate sector, saying that big business “may have surely realised” the power possessed by students.

Manana announced that the government would be embarking on a roadshow early next year to explain its efforts in transforming higher education, but urged students to start preparing for exams.

The figure sent in by the ANC to serve as sweeper in the debate was Nzimande once more. He declared himself “very disappointed” with the opposition’s opportunism on the matter. Staying true to his communist roots, Nzimande said that “capitalist societies are often unable to fund higher education”, but he simultaneously endorsed the need for the government to “confront the role of the private sector” in its responsibility for funding higher education.

It was a parliamentary session where pretty much everyone positioned themselves as standing side by side with protesting students – but whether students buy this new-found solidarity is another story. DM