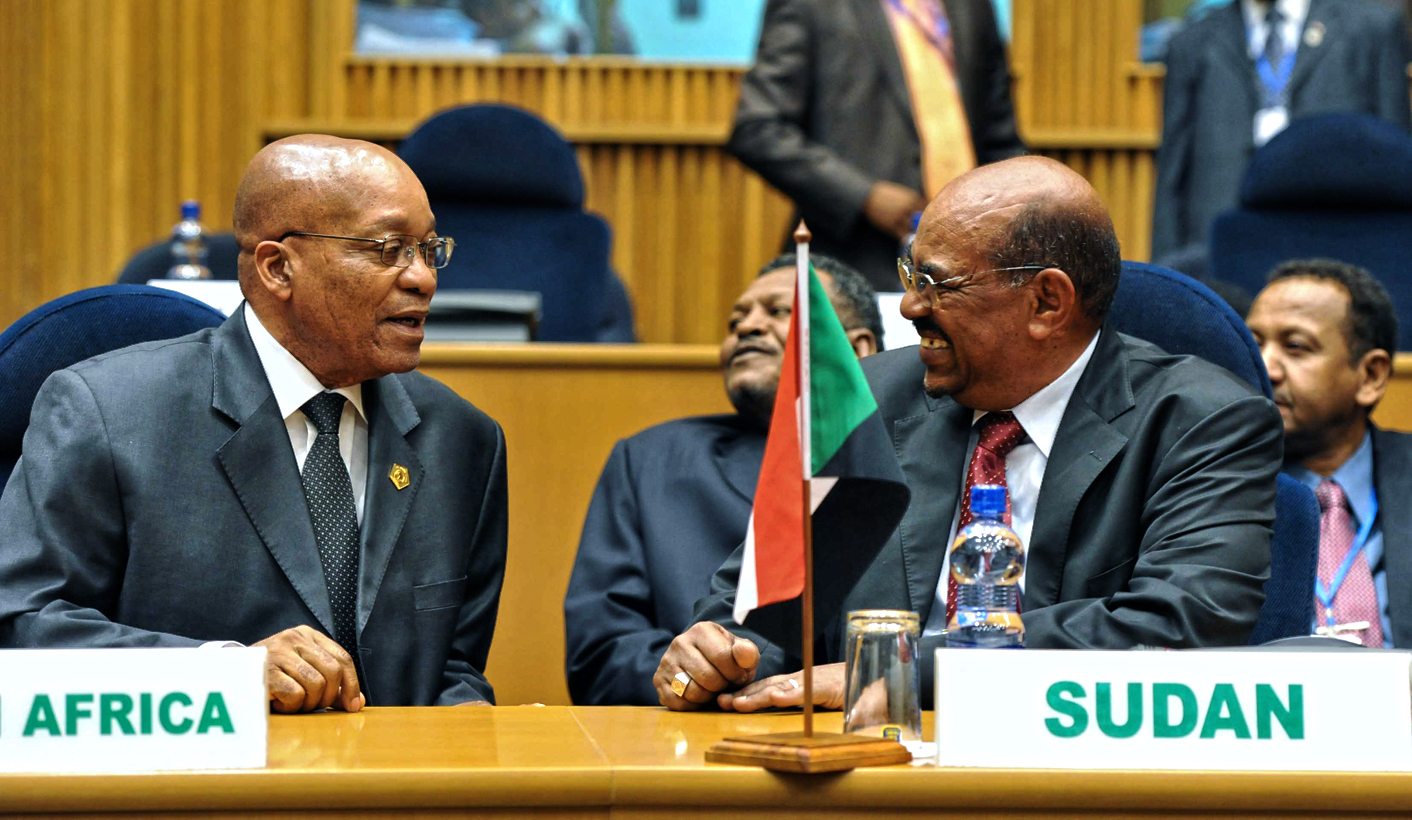 South Africa’s failure to arrest Sudanese President Omar Al-Bashir has created a dilemma for the International Criminal Court (ICC) about how to act against a state party that violated the Rome Statute in a case referred by the UN Security Council. On Monday the ICC prosecutor Fatou Bensouda made a submission to the ICC judges asking for a deadline for South Africa to respond to why it did not arrest Al-Bashir. She also asked for it be confirmed that “South Africa has a continuing obligation to arrest and surrender Al Bashir”. If South Africa is found to be in violation of the Rome Statute, the UN Security Council may have to decide whether to censure Pretoria. RANJENI MUNUSAMY reports from The Hague.

The South African government has not only created a legal quandary domestically over the violation of a high court order to arrest Sudanese President Omar Al-Bashir during the African Union summit in June. The ICC is now in unchartered territory about what to do should Pretoria be found to be in defiance of an arrest warrant.

According to the head of public affairs at the ICC Fadi El Abdallah, the ICC judges will have to make a decision as to whether South Africa violated the Rome Statute, after considering South Africa’s views on the matter. South Africa requested more time to respond to the ICC, pending the outcome of domestic legal proceedings. Government is appealing the North Gauteng High Court ruling in the Supreme Court of Appeal (SCA) that it acted unconstitutionally by not arresting Al-Bashir.

In the nine-page submission to the pre-trial chamber on the Al-Bashir case, the prosecutor Fatou Bensouda said she was seeking the opportunity to be heard by the court to request a definite deadline be set for South Africa to submit its views by 31 December 2015, irrespective of domestic legal proceedings.

Because of the possibility of Al-Bashir returning to South Africa for Forum on China-Africa Cooperation (FOCAC) in December, Bensouda wants the court to also confirm that South Africa has a continuing obligation to arrest and surrender Al-Bashir should he travel to the country again. Her third request to the judges was for a lifting of confidentiality to all documents filed to the proceedings. It is not known how long the judges will take to pronounce on these requests and whether South Africa would be consulted and asked to respond to them.

Bensouda makes the point that when the judges decided to grant South Africa an extension of the initial deadline of 5 October to respond to the matter, she was not given the opportunity to be heard. In granting the extension, the judges ordered South Africa to “promptly inform the Court of any developments in the relevant domestic judicial proceedings as they occur” and in the absence of any such developments, by 31 December 2015 at the latest.

But in what can be perceived as a hardening stance by the prosecution, Bensouda said she was making the request for a definite deadline – about 31 December – for South Africa to respond. This was “out of concern for the potentially open-ended time frame that may result from the need for resolution of the domestic proceedings; indications that Al-Bashir may travel to South Africa again; and the manner in which the proceedings have been represented in South Africa’s submissions in support of its request for an extension of time”.

The prosecutor says in her submission that the proceedings before the SCA was “unpredictable” and could last “well into 2016”. A footnote in her submission said consultations with the South African Litigation Centre, which took the government to court to compel it to arrest Al-Bashir, indicated that the matter was also likely to come before the Constitutional Court.

As far as Bensouda’s office is concerned, South Africa was in clear defiance of the Rome Statute by defying the ICC warrant. Phakiso Mochochoko, the director of jurisdiction complementarity and co-operation in the office of the ICC prosecutor, said as a state party, South Africa was obliged to arrest Al-Bashir. Regarding allegations of bias against African leaders, Mochochoko, a Lesotho national, said the ICC prosecutor was independent and impartial and acted only on the law and evidence. He said five cases currently before the ICC were referred by Africans themselves.

Crimes that fall within the jurisdiction of the ICC are genocide, war crimes and crimes against humanity. He said the court applied the same tests on whether to prosecute individuals, irrespective of whether they initiated the investigation themselves or cases were referred by the UN Security Council. The test was whether the crimes “shocked the conscience of humanity”, Mochochoko said.

Perceptions of bias arose only after the court issued the arrest warrant for Al-Bashir. “The Sudanese government unleashed venom against the ICC,” he said. The situation worsened after the court began investigating 2007-2008 post-election violence in Kenya.

Mochochoko said the ICC did not investigate individuals that were already under investigation by other courts for the same incidents. “The ICC never claimed monopoly of justice… Africans must investigate and prosecute these cases themselves, genuinely, not just to try and shield people,” Mochochoko said.

South Africa has argued that Al-Bashir was covered by diplomatic immunity when he attended the African Union summit in June and there was insufficient time for consultation with the ICC before the Sudanese president arrived in the country. South Africa is also relying on Article 97 and 98 of the Rome Statute, which spells out when requests cannot be executed, such as in the case of diplomatic immunity.

If South Africa implements the decision of the ANC national general council to withdraw from the ICC, it will create another unprecedented situation of one of the 123 state parties backing out. This has not happened since the court was established in 2002.

Deciding to withdraw as a state party also meant South Africa would no longer have the ICC’s protection in the event of genocide, crimes against humanity and war crimes occurring by and against its citizens, including elsewhere in the world.

The ANC NGC decision still has to come before Parliament before South Africa can withdraw from the Rome Statute. The withdrawal would only be effective after one year, and would not affect South Africa’s existing obligations.

And so, while the Al-Bashir matter remains a legal and diplomatic hot potato for government, if South Africa pulled out of the ICC, citizens would in future have less legal protection – not a desirable situation in a country where the foundation stones of democracy are starting to tremble. DM