FIA’s Jean Todt: Safety trailblazer in the heart of the racing world 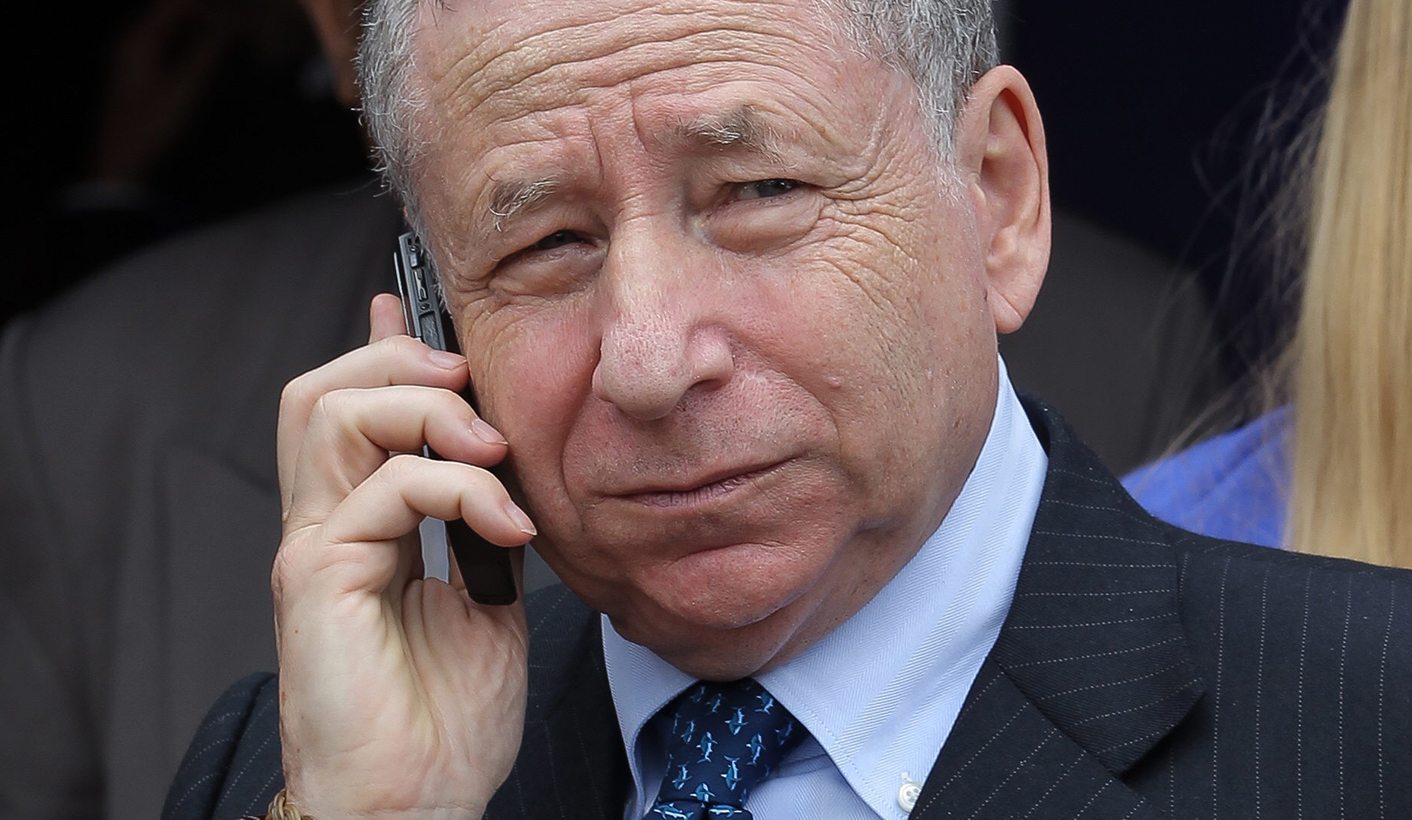 The president of world motorsport's governing body's is quick with a reminder that its mandate is not just motorsport, but road safety. “Five things,” says Jean Todt, “need to be addressed to improve road safety: the first is education. The second is law enforcement, and that includes dealing with corruption. Infrastructure has also to be improved, as do the quality of vehicles. Finally, we have to improve post-accident care.” By GREG MILLS.

Place de la Concorde is at the centre of Paris’s power and grandeur. It sits at one end of the Champs-Elysees; at the other is the Arc de Triomphe. Across the river from the square are the columns of the Assemblée Nationale.

Past the gold-tipped obelix marking the square’s centre is the headquarters of the Federation Internationale de l’Automobile, or as it’s universally known to motorsport buffs, the FIA.

On the outside of the imposing building, atop which flies the blue and white FIA flag, is a hoarding for the latest James Bond, Spectre – hopefully not a portent of what’s inside.

Inside the frosted glass doors, past the security guard, up the navy and gold runner on the stairs and past the portraits of all the presidents since the FIA’s formation in 1904, is the blue-doored office of the incumbent, Jean Todt, 69.

He introduces himself as a motorsport enthusiast “for the past 49 years”, sadly a shared affliction.

A white desk, then, if no white cat. Still, it’s a tough and hyper-political job which requires a deft touch and some steel, more Inspector Harry Callahan than Clouseau.

This role is no doubt helped by extraordinary motorsport credentials

A successful rally co-driver, finishing runner-up in the world championships in 1981, he turned his hand to organisation with extraordinary accomplishment. Under his leadership Peugeot won four rally world championships, the same number of Paris-Dakar titles, and two Le Mans 24-hour victories. Subsequently, as Ferrari’s team principal for 15 years, the Scuderia won 14 Formula One World Championships for drivers and manufacturers, and more than 100 Grands Prix.

But he is no one-track petrolhead. Rather than natter about racing, he immediately reminds us that the FIA’s mandate is not just motorsport, but road safety. An aide is summonsed to show a video on the risks to children. Shot partly in South Africa, Save Kids Lives is a harrowing portrayal of the gamble children routinely take on our roads in simply getting to and from school.

Watch: Save Kids Lives – A film by Luc Besson

The World Bank calculates that 24.1 people per 100,000 Africans are killed annually in traffic accidents, five times the European average. South Africa has a staggering 31.9/100,000. Younger and poorer people are disproportionately affected. Traffic accidents the biggest cause of death of children between five and 15. The report also estimated the cost of this carnage to be as much as 3% of economic output.

“Five things,” says Todt, “need to be addressed to improve road safety: the first is education. The second is law enforcement, and that includes dealing with corruption. Infrastructure has also to be improved, as do the quality of vehicles. Finally, we have to improve post-accident care.” This is a “personal responsibility as much as anything”.

“Use your seat-belts and helmets on motorbikes, and don’t text and drive or drink and drive.” One study of road accidents in Nigeria between 1996 and 2000, for example, found that half involved drink-driving.

To get this message, across, Todt urges action and leadership by individuals “as ambassadors and role models”, not just by governments and motoring bodies.

And here he links back to motorsport.

“There is a strong shared interest between motorsport and improving road safety in Africa,” he says. “For me especially, Africa is a very important part of the motorsport world. As a rally co-driver, the East African Safari Rally was one of my favourites. I also did the Total Rally in South Africa, when it ran to the old Lourenco Marques.”

His affinity for South Africa was clearly enhanced by his experience of working with the designer Rory Byrne, the Bedfordview boykie made good, at Ferrari. “He was probably the most important member recruited to my team, someone who rolled up his sleeves, and was most reliable and passionate.

“For Africa, the most natural category of motorsport is around rallying. For one, you don’t need to invest as much as you do for Formula One. It is also regarded as a national sport in some countries, such as Kenya. We also have to encourage the sport at the grassroots, starting with go-karts, which also improves information about road safety among children.”

Todt is not averse to the goal of getting into the higher echelons. “That’s not to say, that you should not focus on resuscitating Kyalami or encourage someone like Johann Rupert to build a track in Cape Town. To compete at this level, you need to have people willing to give something back, to fund it.”

He counters criticism of the sport becoming too monied and commercial, however, by disarmingly noting that “our biggest challenge is to make the sport affordable and accessible, without compromising safety”.

“We must be a good example, on environmental matters as well as safety. You know,” he chuckles, “when I was a young co-driver I never used to like wearing a safety belt. I found it uncomfortable. Now I buckle up in the back of a car.”

But for those critical of contemporary Formula One, he says “yes, it is too expensive, but it is going in the right direction”.

“You can’t blame designers and engineers, the Rory Byrnes of the world, from wanting to make their cars as fast as possible. They are not interest in anything else. The only way to stop domination is not to complain, but to improve your own performance.”

Critics will accuse the FIA of schizophrenia on safety. Whereas it permits historic racing in cars that would not come close to passing current tests under its imprimatur, it is fanatical about the regulations for Formula One and other categories, the cost of such regulations and the related testing pushing the sport out of the reach of all but the best funded.

But it’s a balancing act. “If people were killed in cars which we tested, we would be blamed. We have to protect people.”

South Africa is one of the original post-war Grand Prix venues, an event that was taken off the calendar in the 1980s amidst the deepening anti-apartheid struggle, reappearing temporarily in the early 1990s only to disappear altogether in 1993 with escalating financial demands.

For a society that could use a few heroes, sporting or otherwise, Todt’s message about South Africa’s doubtful inclusion in top-draw international events is not especially heartening. Then again, helping to get our children safely to school should be a priority. Matching the two goals, speed on the track with safety on the roads, as Todt is attempting, could be just the ticket. DM