Oscar’s ‘palace arrest’: Another paradox for the fire 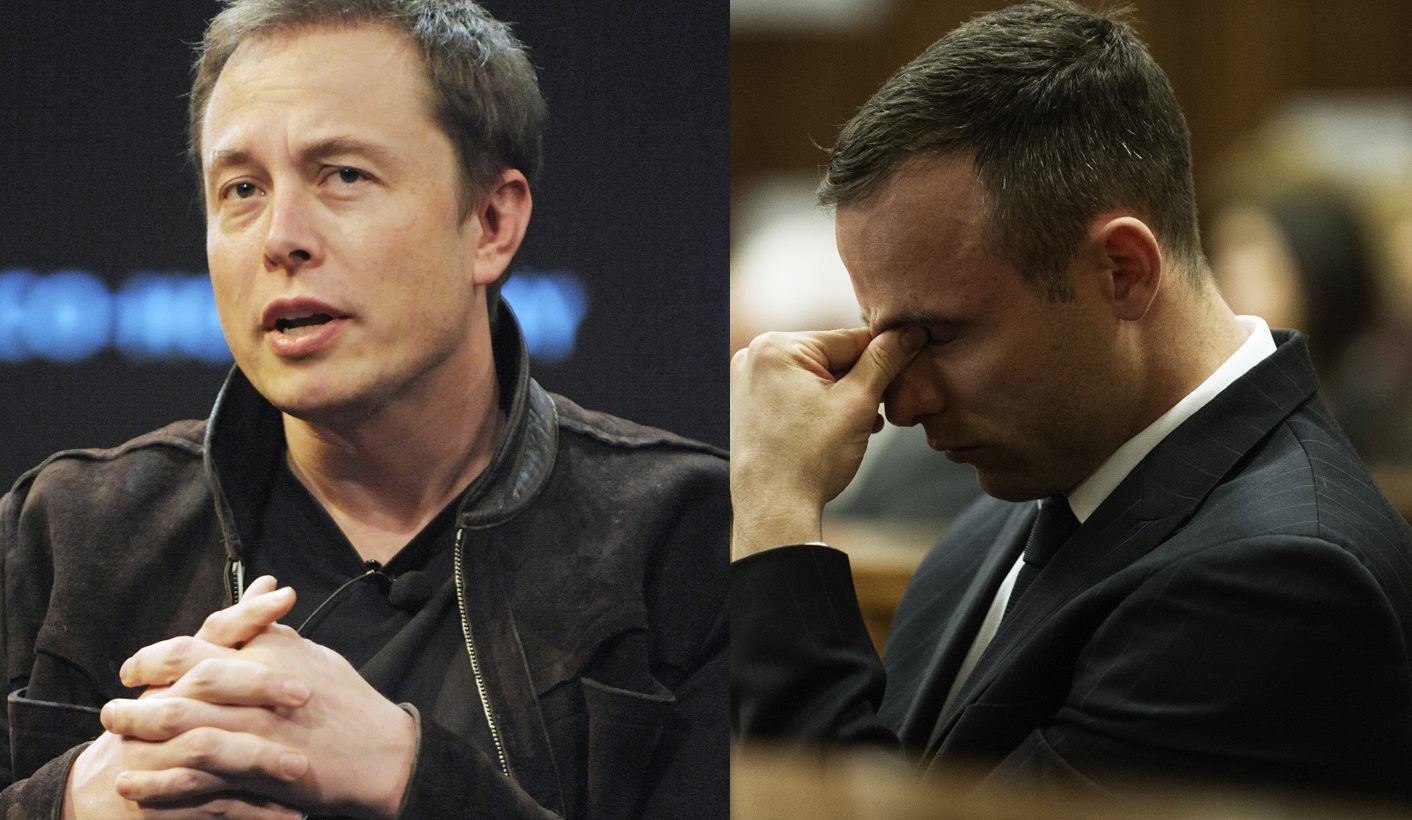 In late 2015, while one alumnus of Pretoria Boys High School continues to prepare humanity for a manned mission to Mars, a second alumnus of the selfsame institution continues to give humanity a whiff of its own armpit. KEVIN BLOOM wonders what an advanced alien race would make of it all, especially given that Pretoria is now choking on its national paradoxes.

Oscar Pistorius killed his girlfriend less than 10 kilometres from where Elon Musk spent his last few years as a resident of our country. Served and consumed in central Pretoria, where a statue of Oom Paul Kruger looks out over Church Square while the State Theatre advertises its forthcoming Madiba the African Opera, this is an empty and meaningless remark, a forced association between two bytes of information that have nothing in common other than the fact that they are tethered to the same South African city. But what if the remark is situated in geostationary orbit, where satellites launched by Musk’s SpaceX have this week been disseminating the globally significant news of Pistorius’s release from prison? Is the connection still inadmissible?

If you have already answered “yes” to the second question, we can’t fault you – you are no doubt a well-balanced individual who rarely gets taken in by fantasy or hyperbole, and you should be congratulated on your excellent progress in keeping it all real (at this point, may we suggest that you return to whatever it is you’re supposed to be doing right now). If, however, you are open to an exploration of the first question, you may find value in the following evocation of humanity’s stunted evolutionary progress: “We are all giants, raised by pygmies, who have learned to walk with a perpetual mental crouch.”

These words appear in Robert Anton Wilson’s 1982 classic Prometheus Rising, wherein it is argued that the human race is considerably more sophisticated than any of its members have ever imagined, and that some of its members have begun to make the transition to a higher mode of functioning. Although not technically a work of futurism, Prometheus Rising does offer a number of predictions that have subsequently proved true, one of which concerns the extraordinary nature of communications from off-Earth vehicles like the various Soviet and Russian space stations. In his preface to the book’s updated edition, published in 1997, Wilson gives this explanation for why in other areas humanity has not advanced at all:

“In the 1970s, I simply did not recognise the extent to which the 1960s ‘youth revolution’ had terrified our ruling Elite, or that they would try to prevent future upsurges of radical Utopianism by deliberately ‘dumbing down’ the educational system. What they have produced, the so-called Generation X, must rank as not only the most ignorant but also the most paranoid and depressive kids ever to infest our Republic.

“I agree with outlaw radio star Travis Hipp that the paranoia and depression result inevitably from the ignorance. These kids not only don’t know anything; they don’t even want to know. They only realise, vaguely, that somebody has screwed them out of something, but they don’t have enough zest or bile to try to find out who screwed them and what they were screwed out of.”

Bar the humour, the above is not that different from the argument put forward by Noam Chomsky and Ed Herman in Manufacturing Consent – the hypothesis that a “propaganda model” is built into the global media system to keep the powerful in power and the not-so-powerful subdued and stupid. Of course, in the decades since these two books were released (the latter was originally published in 1988) the world has moved on. On the one hand, the propaganda model has been accepted as fundamentally self-evident; on the other hand, media has become considerably more concentrated in the hands of the global elite, with idiotic, thought-killing content way more pervasive and entrenched.

And so, in October 2015, while one alumnus of Pretoria Boys High School continues to prepare humanity for a manned mission to Mars, another alumnus of the selfsame institution continues to give humanity a whiff of its own armpit. Granted, today’s South African education system is not the American education system of the 1980s and 1990s, and Pistorius, at 15 years younger than Musk, is more Generation Y than Generation X, but such objections only strengthen Wilson’s implicit point – the kickback against progress must of necessity be as powerful and sustained as the impetus to progress itself.

As an experiment that might have appealed to Wilson, let’s isolate the Oscar saga and look at it from the vantage point of a civilisation a little more advanced than ours. The humans, these super-beings observe, glorify an individual without legs who is able to run a lot faster than almost every other individual on their backward planet, which is proof that they are not exempt from the universal law that all life must eventually transcend itself (the humans’ own term for this is “evolution”). After the legless individual kills his female companion, many of the humans become as anxious to find out why he committed the act as to see how he will be punished. A lot of money is paid for a lot of books on the topic, which mostly turn out to be rushed and terribly written, but which nevertheless reveal that the individual could not handle his celebrity status – apparently, he had already started to lose his temper, discharge his weapon in public, behave as if he owned the place (the planet, that is). Despite this, the individual is sentenced to only five years in prison. When he has served ten months of his sentence, the individual is transferred to “house arrest” in a palace featuring a dozen bedrooms, a private gym, a swimming pool and landscaped gardens.

To return, then, to Wilson’s Prometheus Rising: “This planet is, to put the matter mildly, populated and largely controlled by domesticated primates who are not in all respects reasonable men and women. Voltaire may have been exaggerating when he said that to understand the mathematical meaning of infinity, consider the extent of human stupidity; but the situation is almost that bad. Millions have been murdered by stupid leaders or stupid mobs, for stupid reasons, in every century; and the bizarre (accidentally imprinted) reality-tunnels which make this possible continue to rule us and robotize us.”

But what do we do with the Pretoria connection, the fact that South Africa’s capital city once schooled both Musk and Pistorius? The answer might lie in an otherworldly image: the statue of Oom Paul Kruger that looks out over Church Square, while the State Theatre advertises its forthcoming Madiba the African Opera.

Clearly, the propaganda that has bridged this gulf is now collapsing. South African students, to upend the point made by Wilson, know exactly what they’re being screwed out of – and they are neither lethargic nor detached. DM

Photo: (Left) Elon Musk, Chief Executive Officer of Tesla Motors Inc speaks at a discussion panel after a screening of ‘The Revenge of the Electric Car’ at the Tribeca Film Festival in New York, USA, 23 April, 2011. The Tribeca Film Festival runs through 01 May 2011. EPA/PETER FOLEY. (Right) Oscar Pistorius is seen during his trial at the high court in Pretoria, South Africa, 16 April 2014. EPA/GIANLUIGI GUERCIA.