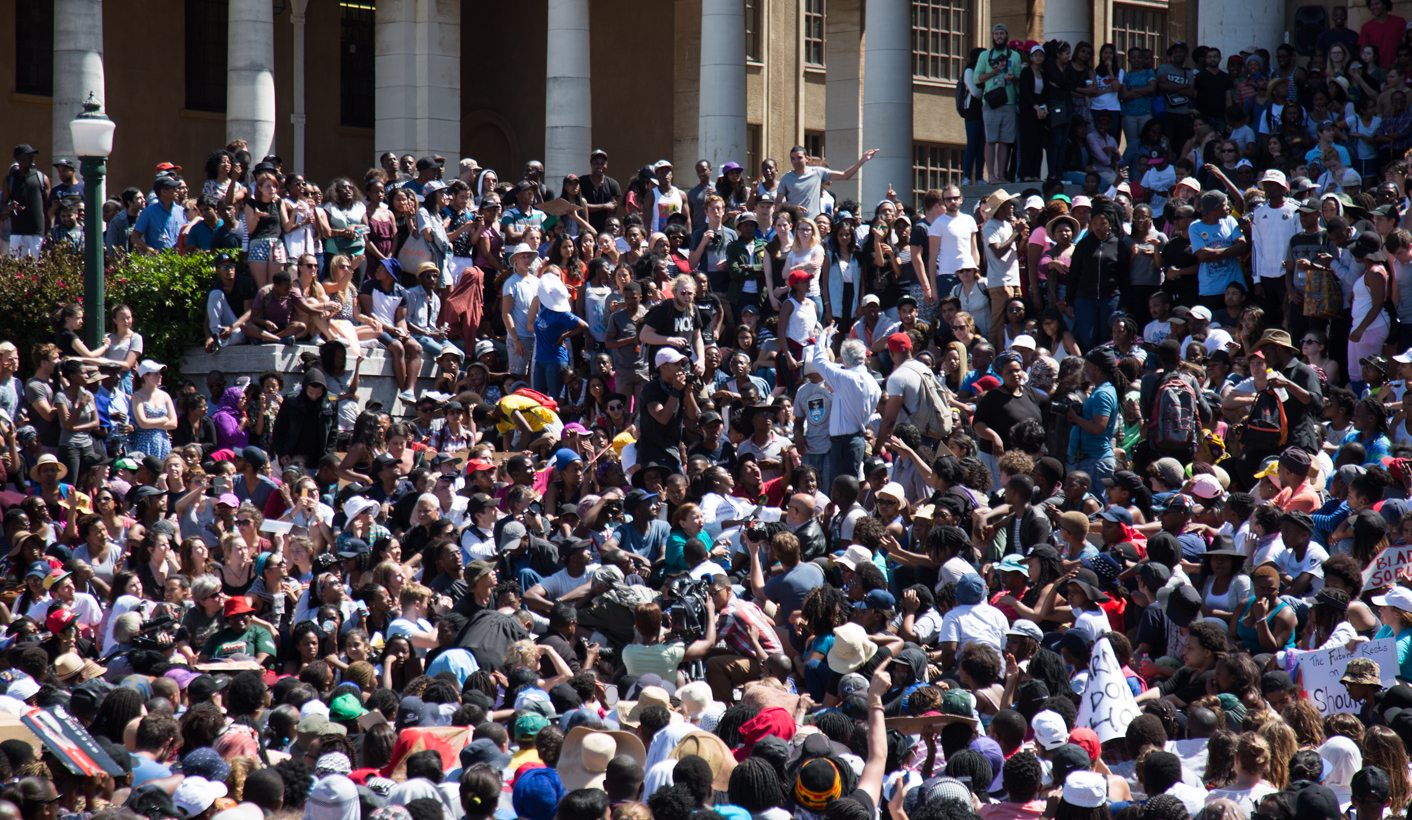 Cape Town’s #FeesMustFall protests took a marginally calmer form on Thursday compared to the dramatic scenes in Parliament on Wednesday, but the demonstrations show no signs of abating. If anything, in fact, each day that passes sees more students arriving on campuses and streets to make their voices heard. By REBECCA DAVIS, SHAUN SWINGLER and MARELISE VAN DER MERWE.

Protest action got an early start in Cape Town on Thursday, with students forming a queue outside the central magistrates court from around 8am. They were there to witness the court appearance of the 29 students arrested during Wednesday’s drama at Parliament.

Twenty-three protesters had been released from the Cape Town Central Police Station late on Wednesday night, with another six spending the night in Bellville cells after a detour past the Hawks office. A short hearing brought all 29 together at 11am on Thursday morning, and the charges were confirmed as public violence, participating in an illegal gathering, and trespassing. All 29 were released without paying bail and without conditions, with the matter postponed to 23 February 2016.

Student protesters expressed anger at the arrests in the first place and the offences with which the 29 are charged. “There was only one party who was violent here,” said Cape Peninsula University of Technology (CPUT) student Fundo Zukufa, referring to police actions the previous day. “I am not discouraged at all. This is building momentum.”

One of those arrested during Wednesday’s protests was University of Cape Town (UCT) vice-chancellor Max Price’s son Ilan, who told journalists he had no interest in hogging the limelight. “If you think the story is about me, you’re missing the point of the protest,” Ilan Price said. His mother, UCT sociology professor Deborah Posel, told Daily Maverick: “I’m proud of my son, and of my partner [Max Price] too.”

The six students detained overnight at Bellville emerged to a heroes’ welcome, in the form of hundreds of cheering students outside court. “This is only the beginning,” UCT student leader Chumani Maxwele told the crowd. “There will be no fee in 2016!”

Back on the UCT campus, demonstrations on Thursday were initially relatively peaceful. By around 1pm, however, students broke through the doors of Jameson Hall on the upper campus, which had been locked in preparation for exams. They began overturning desks and chairs, singing and dancing. Outside volunteers, unperturbed, served snacks and water that had been donated by supporters.

Occupational therapy student Beauty told Daily Maverick she joined the protest because she was almost forced to leave university this year, having been unable to afford the fees. “I bought my ticket home in June,” she said.

Mother and Shawco volunteer Miranda Horton told Daily Maverick she felt the protest was important for education at all age levels. “If we don’t get involved in a cause like this … what is going to happen to little children at ground level … who don’t have the funds?

“They [the students] are not out to be malicious … they love South Africa, that is why they are doing this,” she said.

Thandi Nkosi said she joined the movement “from the first day” because neither of her parents were working. By the time she graduated, she would owe close to R200,000 in fees, and she was the first in her family to attend university. A friend of hers had been hit by a car during the protests and injured, and her anxious mother regularly asked her not to take part in the protests. “But it’s a sacrifice I am willing to make,” she said.

The vice-chancellor was present in the crowd, prompting one student to call him a “very brave man”. Price opted to address students over a loudhailer rather than the proffered microphone, despite students’ repeated chants of “We can’t hear, we can’t hear”.* What Daily Maverick caught of his speech outside Jameson Hall was largely inaudible.

Later, however, he addressed media, saying he was proud of the students for taking a stand. “I am proud of my students and I am proud of my son,” he said. “If I could have, I would have joined the protests yesterday.” In an official statement, he said the university would assist the students as far as possible and that he hoped charges of treason, if pressed, would be dropped. (It later emerged that, technically speaking, those arrested had not been formally charged with treason).

Price said the situation on campuses across the country was “critical” and called for “unprecedented action” – which would include an open forum for members of the university, on Friday morning; a meeting of the UCT council on the weekend to discuss ways to prevent students in need from facing a fee increase in 2016; and a discussion of the university’s financial aid package. “In the short term, we will be meeting the president and his ministers in Pretoria tomorrow and will demand decisive state intervention to ensure that students in need do not face a fee increase in 2016,” he said.

Price condemned the excessive use of force against protesters. “I appeal to the state to act with restraint. I subscribe fully to the statement of the president of convocation, Dr Barney Pityana, who made the point this morning that there can be no justification for the excessive use of force of the kind that was witnessed on television on 21 October 2015,” he said. “As he put it: this brought shame to every South African.”

The University of the Western Cape (UWC), meanwhile, issued a statement confirming the closure of the university for two days and the rescheduling of at least one exam. CPUT confirmed it would remain closed for Friday 23 October, after having obtained an updated court order.

Students from CPUT marched off campus in their thousands in the middle of the afternoon, and were met by police on Darling Street near the Grand Parade. In scenes that had immediate echoes of the previous day, stun grenades were rapidly unleashed on protesters, sending the students scattering for cover before regrouping. A tense standoff with police ensued, with the cops barricading the top of the street and students advancing upon them, linking arms and singing.

One protester was allegedly taken into a police van – with some protesters claiming it was Lindsey Maasdorp, who had been arrested outside Parliament on Wednesday and released just hours earlier – although Daily Maverick was unable to independently confirm this, and police would not comment on whether any protesters had been removed from the scene.

“He did nothing!” Zoliswa Mgindo told Daily Maverick.

“He was just walking. I saw everything. They asked, ‘Are you in leadership?’ and he said no … Then they put him in the van,” Zandile Zakhayi added.

At least 100 protesters remained on Darling Street, which had been barricaded, while a further 1,000 headed for the CPUT campus in Granger Bay, near the Waterfront, bringing traffic to a standstill. “With a name like Blade, the least you can do is cut fees,” one protester’s placard read. As the students passed workers on the street, they were greeted with shouts of “Viva!” and “Fees must fall!”

By 7pm, the action had shifted to UWC’s Bellville campus, where events were escalating dramatically, according to tweets from eye-witnesses. Masakhane Matushe wrote: “Students being shot at by police. Robert Sobukwe shut down.” Protesters said police had been shooting at them with rubber bullets, with reports surfacing after dark of police firing water cannons and tear gas. Elzaan Julius tweeted: “Student (sic) at UWC were shot with tear gas. Police are standing nearby.”

Speaking to Daily Maverick on middle campus, though, UCT politics and media student Ashleigh Lopez told of a policeman she encountered at the gates of Parliament on Wednesday.

“When the white students formed a barrier, knowing that it was less likely that white students would be harmed, I asked the policeman: ‘Why are you doing this? Don’t you have children?’” she said.

“And when the crowd had dispersed, he looked at his colleagues to see whether they were listening, and when they were looking away, he looked right at me and said quietly, ‘Thank you.’ Some of them are smug assholes. But others are just ordinary people, doing their jobs.” DM

Main photo: “I appeal to the state to act with restraint,” said UCT Vice-chancellor Max Price on Thursday, as he addressed the students at UCT Upper Campus. (Shaun Swingler)

* Edit: Daily Maverick has been informed that there was dissent among the protestors. Some students near Price allegedly did not wish to hand over the microphone initially, while others were upset at not being able to hear. The dispute was later res0lved.