#FeesHaveFallen: A big day in Pretoria, with a Zero outcome 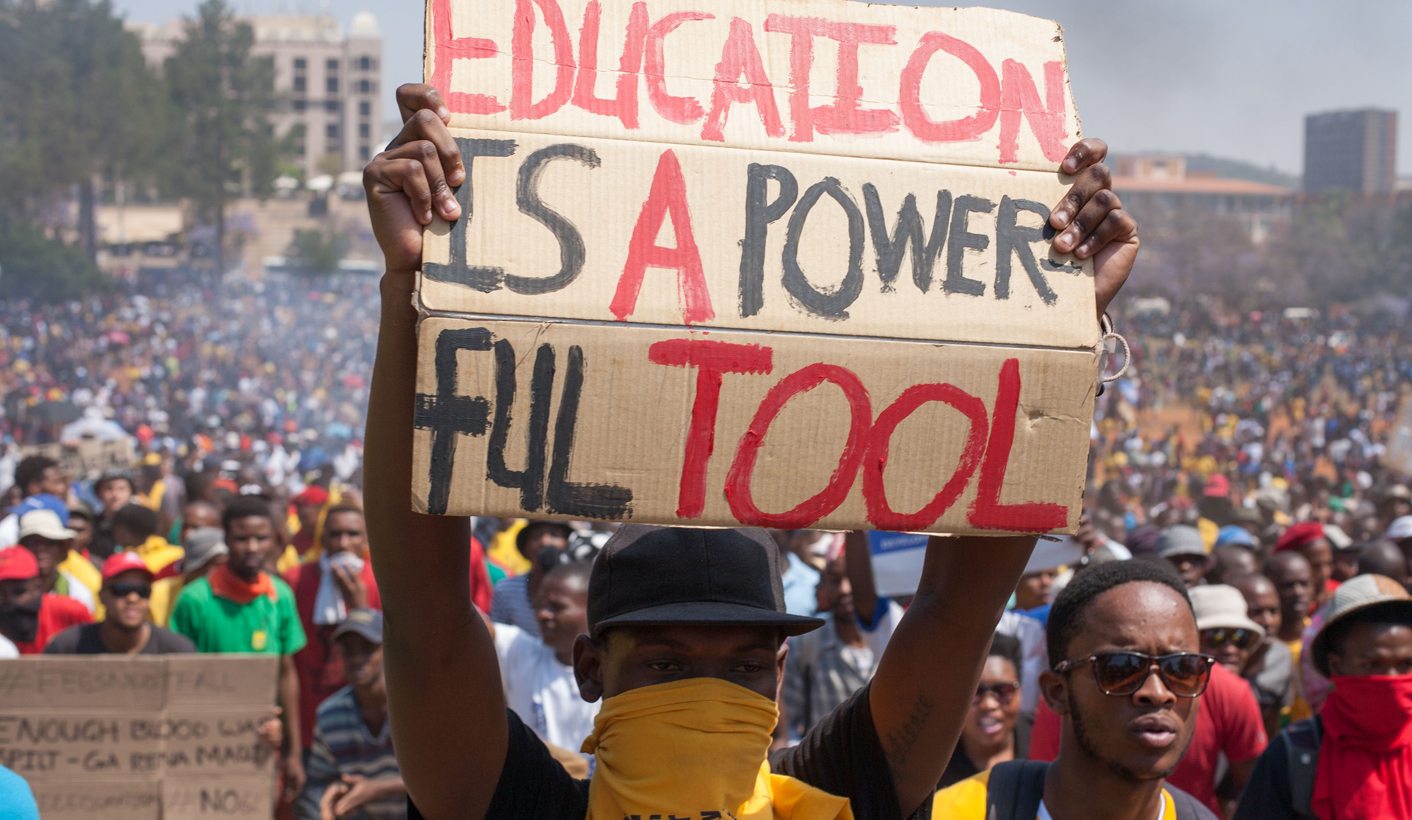 More rocks, more tear gas, more rubber bullets. It’s just another day in the new South Africa, except this time the President had a ringside view of the action as #FeesMustFall targeted the Union Building. The crowds, however, did not see the president – and they weren’t happy, even when he bowed to their demand to scrap fee increases altogether. By SIMON ALLISON.

After weeks of student protests, the South African government agreed on Friday to scrap fee increases at all tertiary institutions in 2016. The announcement was made against the backdrop of another day of demonstrations across the country, some of which escalated into violent confrontations between protestors and the police. The students got what they wanted – for now, anyway.

The largest demonstration on Friday took place at the Union Buildings, the seat of government and office of President Jacob Zuma himself. More than 10,000 people gathered to demand that proposed university fee hikes be scrapped, and called for President Jacob Zuma to personally address their concerns. This is the largest single student protest since the 1976 Soweto uprising, and participants represented a broad cross section of South Africa’s racial groups and political parties: The ANC, the EFF and the DA were all represented (although there were more yellow and red shirts than blue), and there were plenty of white faces in the crowd.

Although the presidential podium was erected twice, Zuma never appeared, choosing instead to make the announcement in the press room inside the main building.

“We agreed that there will be a zero increase of university fees in 2016,” said Zuma, following a meeting with student leaders.

Zuma’s non-appearance infuriated protectors, a small minority of whom responded by tearing up security fences, burning portable toilets and throwing rocks at police. The police responded forcefully, using tear gas, rubber bullets and stun grenades to disperse the crowd. By sunset, the confrontation had degenerated into running battles on the streets of Pretoria city centre between small groups of protesters and police, during which several vehicles were damaged.

“It’s wrong. We were invited here by the president, and we’ve been waiting all day. We had to react. We had to show the president this is serious,” said Tobago Madiba, 21, a student from the Tshwane Institute of Technology (TUT), his eyes closed after exposure to tear gas.

The demonstration had begun peacefully, with protesters chanting and holding up signs with slogans like “Why does the government fear educated youth?”, “If his name is Blade, why can’t he cut our fees?” and, poignantly, “1976”. When some protestors began to throw rocks, others tried to dissuade them by chanting “Non-violence! Non-violence!”.

Student leader Mcebo Dlamini, a key organiser with the University of Witwatersrand, said that students had not caused any violence. “There is no violence here. We have seen students reacting to the brutal system of the ANC [African National Congress, the ruling party].” To his credit, Dlamini called his supporters away from the frontline and lectured them about the need for non-violence and discipline.

Stephen Grootes, a senior political reporter for Daily Maverick and Eyewitness News, said that the success of the student protests is a new challenge for the ANC. “What this does reveal is the ANC’s inability to deal with a multi-racial, multi-class, and multi-party group of people who refuse to buy into the old political narrative,” he said.

The protests in Pretoria were accompanied by others in most major city centres throughout the country, including Cape Town, Durban, Stellenbosch, Port Elizabeth and Grahamstown. Hundreds of South African and international students also attended a solidarity rally outside the South African High Commission in Trafalgar Square in London.

Although the students have got what they were asking for at the beginning of the protest, it is unclear whether they will now put their placards away and return to class on Monday. Many were angered by the forceful nature of the police response, while others are determined to use this momentum to push for the scrapping of university fees altogether.

“Now we know Zuma is a coward. He’s not a man. We want more now, not just a 0% increase. We want free education,” said Ngavatshedzo Mpepu, 24, from the University of Pretoria. DM

Photo: Students protested at the Union Buildings on Friday ahead of the announcement by President Zuma that Fees would not rise in 2016. (Greg Nicolson)