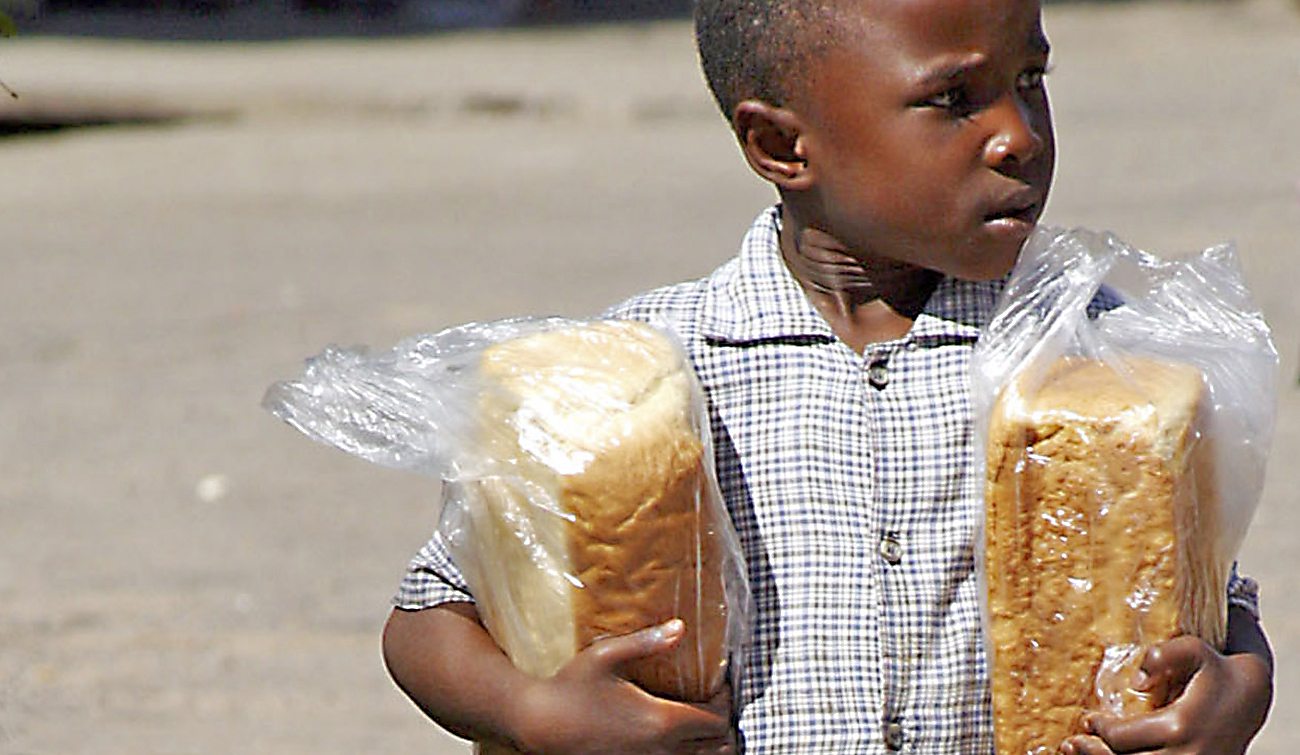 When protesters speak of poverty, it is almost inevitably in the language of food, of bread. A new #MustFall movement, #ThePriceOfBreadMustFall, is calling on the state and the private sector to work towards the realisation of the constitutional right to food. JANE BATTERSBY-LENNARD for GROUNDUP.

Amidst the #FeesMustFall protests, a second #MustFall has emerged and has largely fallen under the radar: #ThePriceOfBreadMustFall. On Tuesday, a group of activists occupied the Shoprite in Khayelitsha Mall demanding lower food prices generally, and bread prices in particular.

This is an important moment, as although the right to food is a constitutional right under Section 27 (as the right to higher education is under Section 29), there has thus far been very limited civil society mobilisation around this right. However, when protesters speak of poverty, it is almost inevitably in the language of food, of bread: “We cannot even afford bread to feed our family”.

By connecting to the #FeesMustFall movement, this activism can be seen to be making a connection between the failure to realise the right to food with the failure of the right to higher education. Both are asking important questions about the role of a range of stakeholders in advancing these rights, universities in the case of #FeesMustFall and the private food sector in #ThePriceOfBreadMustFall.

So, why bread and why now?

I was the Cape Town partner of an 11-city survey that took place in nine southern African cities in 2008, looking into urban food insecurity. We focused exclusively on lower-income areas of the cities, working in Khayelitsha, Philippi and Ocean View in Cape Town. We found that 80% of sampled households in these areas were moderately or severely food insecure, using an assessment criteria designed by the US Agency for International Development. Khayelitsha was the most food insecure Cape Town site.

We found very limited dietary diversity, with many households subsisting on a diet of some staple cereal (rice, maize, bread), sugar, fat and tea/coffee. The poorest households were spending over half of their income just to get these basics. In this context, any increases in the cost of basic foods has a profound effect on household survival. The cost of a nutritionally balanced diet is simply out of the question for the vast majority of households.

Recent work by the Bureau for Food Agricultural Policy has found that for a household to consume a ‘balanced daily food plate’ of food, it would have to have an income of around R5,630. Using this as a baseline, it is clear that even employed households would struggle to achieve a balanced diet. According to Census 2011, 61.5% of Cape Town’s households earn less than R6,400 per month. The problem is not simply poverty, but a food system which makes healthy foods unaffordable for the majority of the population.

Last week, at a World Food Day Meeting hosted by the Centre of Excellence in Food Security at the University of the Western Cape, a community health worker from Khayelitsha spoke about the extremely high levels of diabetes and hypertension in the community. She told how nutrition messages about healthy eating were being undermined by what foods were available and affordable in Khayelitsha.

Globally and locally, the 20-year trend has been for the price of healthier, unprocessed foods to increase and the price of ultra-processed foods to decrease. In South Africa, as a result of a series of agricultural and trade policies, we now have one of the world’s most consolidated food systems, dominated by a few large agro-processors and retailers who drive food prices and relative accessibility. This system is not working in the interest of the poor consumer.

I have been tracking the rapid expansion of supermarkets into low-income areas. While some will argue that this is a boon for food security and local economic development, we need to ask whether this is really the case. There is evidence to suggest that their entry erodes the local food economy. Spazas and street traders may appear to be more expensive on a unit-by-unit basis, but they sell in smaller units (half loaves etc), have extended opening hours, and even sell on credit, all of which make them a valuable part of the food system serving the poor. Their loss erodes, not enhances food security. There are also concerns that the supermarkets in lower-income areas are not stocking sufficient healthy foods, and are simply making highly processed foods more accessible.

We need to understand that food insecurity and the struggle to access food is not simply a story of poverty which the state needs to fix by promoting home gardens, nutrition education and food parcels. It is a problem of the system that gets food from the field to the household.

Although major bread producers were fined for price-fixing in 2007, and although the Competition Commission announced a market enquiry into the grocery sector in June this year, there is still no acknowledgement from the state that the structure of the food system is driving food insecurity.

The new Food and Nutrition Security Policy does not acknowledge the state’s role in shaping a food system which is concentrating power in the hands of large private sector players and away from the poor.

The state repeats messages that people should grow their own food and use nutrition education messages to improve their diet. It effectively shifts the responsibility of a systemic crisis onto the poor themselves.

Jane Battersby-Lennard is co-ordinator of the Consuming Urban Poverty Project at the African Centre for Cities.