#FeesMustFall: Was ‘high treason’ on the cards for arrested students? 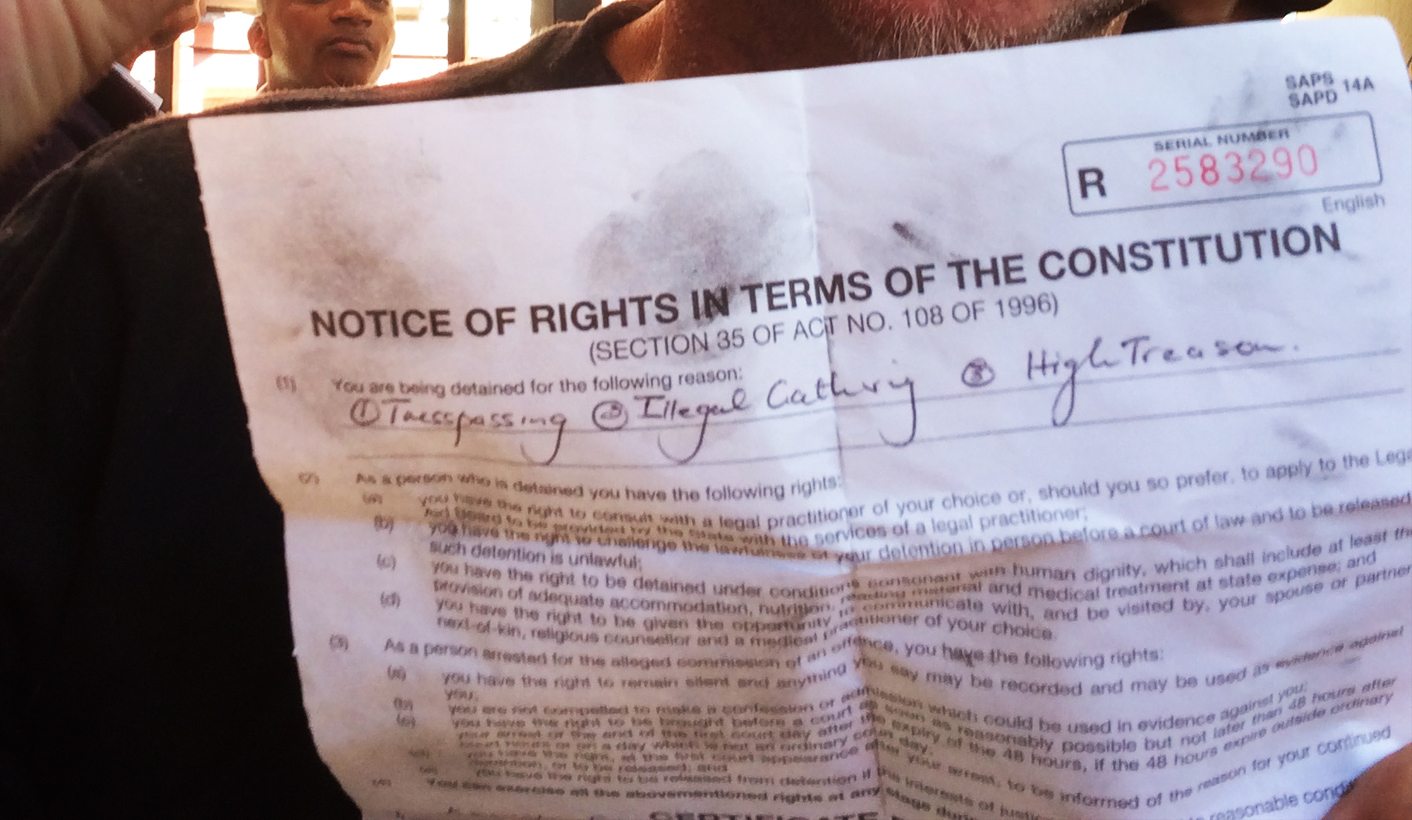 One of the most unsettling aspects of the official response to the #FeesMustFall protests thus far has been the suggestion that at some point there was a possibility of the protesters being charged with the crime of 'high treason'. REBECCA DAVIS looks at the evidence – and talks to someone with firsthand experience of being on trial for high treason in South Africa.

On 21 October 1982, African National Congress (ANC) activist Barbara Hogan became the first white South African woman to be convicted of high treason. Exactly 33 years later to the day, Hogan would watch as student protesters were arrested on the grounds of Parliament and taken to the Hawks office in Bellville, where they would be issued detainee slips listing their offences. “1) Trespassing 2) Illegal gathering 3) High treason”.

During apartheid cases, high treason was defined as: “Any overt act committed by a person owing allegiance to a state … with the unlawful, hostile intent to overthrow, impair, violate, threaten or endanger the existence, independence or security of the state or to overthrow or coerce the government of the state or change the constitutional structure of the state.”

Despite suggestions from some legal academics that high treason is an archaic offence, it does still exist in South African law. The South African Police Service lists it on its website as one of the “common law offences still applicable within the South African legal system”. Regional magistrates’ courts have jurisdiction on all criminal matters – including rape and murder – except treason.

Could it be possible that the actions of the six #FeesMustFall protesters, who had done nothing more than enter Parliament without permission, might fall into the same category of crime?

As word spread on social media on Wednesday night about the possible treason charge, both the ANC and the Hawks seemed to go into damage control mode. Hawks spokesperson Brigadier Hangwani Mulaudzi issued a statement condemning such “malicious rumours”, blaming the media’s “irresponsible reporting”. The ANC also put out its own statement denouncing “irresponsible reporting”.

Yet despite this bluster, ambiguity remained. Popo Mfubu, a lawyer acting for one of the so-called ‘Bellville 6’ – the six protesters held overnight at Bellville police station in Cape Town – told Daily Maverick before their court appearance on Thursday that he had seen “treason” himself on the police’s paperwork.

For Hogan, waiting in the corridors of the magistrates’ court on Thursday to hear the fate of the detained protesters, the whole episode was a little too close to home.

“My trial was an absolute farce,” Hogan recalled to the Daily Maverick. “The judge admitted I had done nothing illegal per se, but I was involved with a banned organisation [the ANC]. I was not involved in any act of violence. But I was convicted of treason. The judge was intent on sending a warning to young white people.”

Hogan was sentenced to 10 years’ imprisonment and refused leave to appeal.

Thirty-three years after her conviction, Hogan expressed serious concern that a treason charge might have been on the cards for the #FeesMustFall protesters.

“What would that mean?” she asked. “Are we going back to apartheid-style criminalising of general political protest? Why would we go back to using those primitive forms of political oppression?”

When the Bellville 6 were released, one of their first acts was to show journalists the detainee slips they had signed the previous nights. There, the words “high treason” appeared in black and white. When student Kgotsi Chikane was informed that officials were denying any hint of a treason charge, he appeared bemused.

“Talk to the Hawks,” Chikane said.

The students were not ultimately charged with high treason, which suggests the idea was thought better of at some stage during the night. Rumours swirled of high-level political intervention. Mfubu suggested diplomatically that the state “saw the error of their ways”.

The news will have come as a relief to Hogan, who said her presence at the court earlier was an act of solidarity.

“I’ve been identifying hugely with the student protests, as someone who comes from a similar protest generation,” she said. “I am very very concerned with students coming to campuses without resources to sustain themselves.”

When it came to the police treatment of students, Hogan said: “I have been very angry about what’s going on.” DM