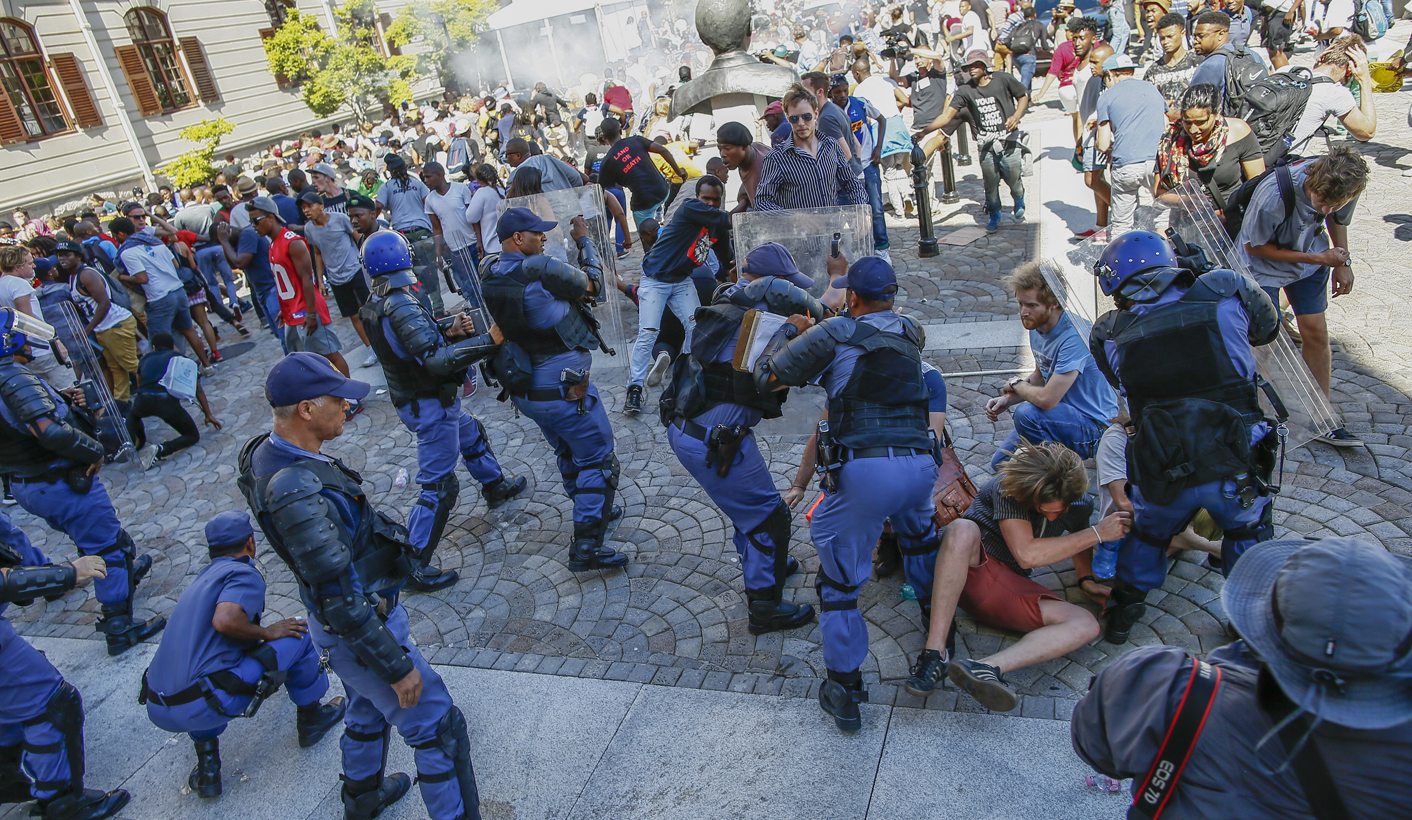 The only noteworthy aspect of Wednesday’s parliamentary schedule was supposed to be the tabling of Finance Minister Nhlanhla Nene’s midterm budget review. Shortly after 2pm, everything changed. The legislature became, for a few brief moments, the 'People’s Parliament' it is often touted as – before it exploded into a battlefield. By REBECCA DAVIS, SHAUN SWINGLER and MARELISE VAN DER MERWE.

On Wednesday, the discontent felt by South Africa’s students over unaffordable university fees arrived on the doorstep of the country’s most powerful people.

Thousands of students from the University of Cape Town (UCT) and the Cape Peninsula University of Technology took their protest from campus to Parliament in the early afternoon. It was an auspicious date to choose. Not only was the National Assembly packed with prominent politicians to hear the medium-term budget – including Higher Education Minister Blade Nzimande, the target of students’ wrath – President Jacob Zuma himself was present.

With Finance Minister Nhlanhla Nene delivering a speech which made only fleeting mention of the ongoing crisis on South Africa’s campuses, MPs, government ministers and the president of the country sat in the chamber while students just a few metres away were set upon by riot police.

How the students managed to gain access to the parliamentary precinct is still unclear. Some students claimed the gates were opened for them; other reports had it that the students broke through. However it happened, they arrived en masse: a young, multiracial crowd suddenly swarming towards the National Assembly.

They appeared to carry no weapons. Their intention, they said, was to talk to Nzimande. Almost as soon as they were gathered in front of the National Assembly, most of the students sat down. But with bewildering speed, riot police assembled. The question of how a public order policing unit was ready to act so promptly still remains to be answered, since National Council of Provinces chairperson Thandi Modise would later tell journalists that Parliament had not been expecting the students.

Within minutes, stun grenades and pink gas were fired at students, who scattered, screaming. “I’m scared! I’m scared!” one female student hyperventilated. The noise of the stun grenades being fired was deafening, and could easily have been mistaken for gunfire to the untrained ear. The smoke added to the confusion.

Watch: #FeesMustFall – Violence at the Gates of Parliament

As had happened a day earlier outside Rondebosch police station, white students formed a human shield at the front of the protesters. “Will they shoot now?” yelled a student. They did. More earsplitting stun grenade shots, more confusion, more terrified students running for cover.

At a press briefing much later that afternoon, journalists – seeking to understand how the business of the National Assembly could have continued amid the uproar outside – would ask Acting Speaker Thoko Didiza what she had heard. “I didn’t hear anything,” Didiza replied.

Riot police beat the students back with force, using shields and truncheons. The harrowing video footage shot by Daily Maverick’s Shaun Swingler clearly shows unarmed students responding with relative restraint, though evidently angry and confused. “We are doing nothing!” one young man yells hoarsely. “We are fighting for you!” another appeals to police in vain.

While police succeeded in forcing students back behind the main gates of Parliament, on the other side of the precinct students were still on the grounds. Linking arms, they sang Nkosi Sikelele’. Police responded by firing more stun grenades and forcibly shoving students towards the gate in the aftermath of each grenade.

Students who were apparently identified by police as particular troublemakers were dragged by multiple cops into police vans to be arrested. One was Kgosi Chikane, son of struggle hero Reverend Frank Chikane. “We just want to talk to Blade!” he shouted. Pam Dhlamini, a UCT student who has been a prominent leader in the protests on that campus over the past few days, was similarly arrested after police accused her of using pepper spray on them. “Smell my hands!” she pleaded in vain.

With all students swept back behind gates, a policeman barked: “Parliament has been cleared!” into his radio. By this time Nene’s budget had been delivered, and the higher education minister finally made an appearance before students. Perhaps to send a message, he was flanked by the police and defence ministers. With the aid of a small loudhailer, Nzimande attempted to explain to students the outcome of the meeting he held with university management on Tuesday, but booing and singing soon drowned him out.

“Blade must fall!” they chanted. The Cape Times reported that at this moment Nzimande was handed a cellphone by an aide and told Zuma wished to talk to him, but Nzimande refused to take the call. Defeated by the students, Nzimande retreated indoors. A bottle of water thrown at the departing ministers splashed former police commissioner Bheki Cele.

A group of students Daily Maverick spoke to in the late afternoon expressed their intention to go and occupy Camps Bay Police Station, where rumour had it that fellow protesters were being held. Plans seemed vague, however: some protesters were of the opinion that they were to barricade the gates to Parliament until morning; others were ready to move to the police stations. Meanwhile, there was a steady rotation between locations where Nzimande was thought to be. “The communication isn’t always so clear,” one student said a little resignedly.

Riot police outside Parliament’s main gates, losing patience, gave students a countdown to leave or face arrest. The protesters responded with derisive cheers. Row upon row of riot policemen duly advanced on the students, driving them back along Roeland Street. Passers-by who were unconnected to the protests were also driven along by policemen barking commands and brandishing shields.

“Do you want to bleed?” one cop yelled at a woman who refused to move. “If you stay there, you’re going to bleed!” Further stun grenades followed. It was a forceful display of police might, happening in the middle of Cape Town’s central business district at rush hour. Onlookers observed events with bemusement and concern, with many taking footage on camera phones. Protesters could be seen running down back roads throughout the city for some time.

“This government has broken the promises it made to our parents,” one student, who declined to be named, had told Daily Maverick earlier in the day. And not just any parents, it emerged. Other than Chikane’s son, among the students arrested were reportedly the children of advocate Wim Trengrove and UCT vice-chancellor Max Price, while late ANC stalwart Phyllis Naidoo’s grandson was also said to be detained.

Though Modise said she believed seven students had been arrested, reports later in the day suggested that the real figure was closer to 30. A lawyer assisting detained students at Cape Town Central Police Station informed Daily Maverick that they would be charged with illegal gathering under the Regulation of Gatherings Act, and were scheduled to appear in court early on Thursday morning. A further six students, detained at Bellville, were said to be facing more serious charges, though it was not immediately clear what these were.

While students were already mobilising for the next protest, the National Joint Operational and Intelligence Structure put out a statement congratulating police.

“We are satisfied with the manner in which the situation was managed by police outside Parliament today, despite being constantly provoked by the students,” it read. “Further criminal action against those that may have transgressed the law will be considered.“

The statement continued: “The Public Order Policing members have been explicitly instructed not to use unnecessary force, as in all deployments. As they have been trained in this particular aspect of policing, the SAPS (South African Police Service) has confidence in these members’ ability to discharge their duties.”

The SAPS might be content with the way events played out, but the reality is that the police’s extraordinarily heavy-handed treatment of students on Wednesday cannot fail to inflame an already combustible situation. One thing’s for sure: this is not the end.

“They just got arrested for singing and clapping hands!” one student exclaimed. “Oh, we will turn South Africa around.” DM