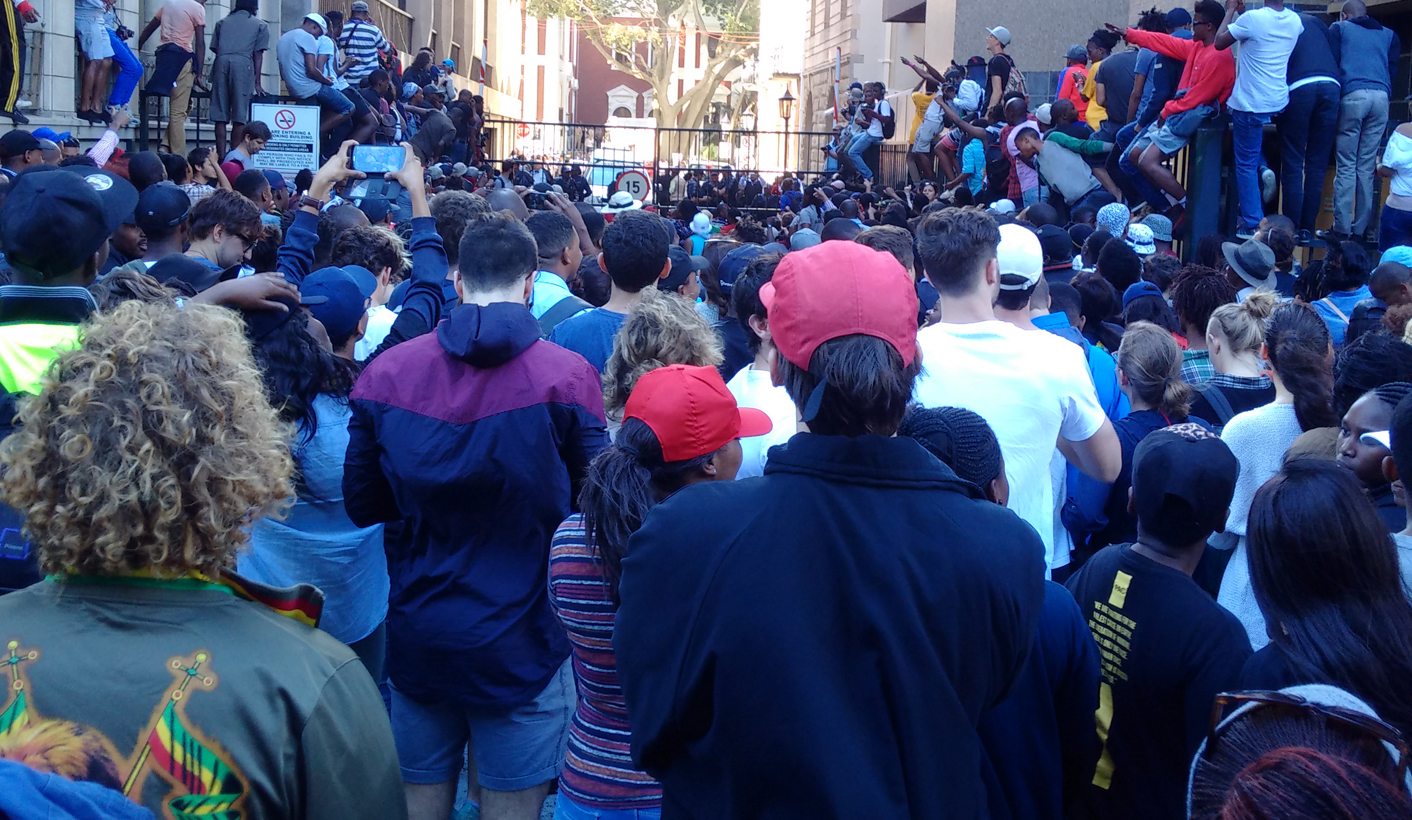 Protests by university students against rising tertiary fees reached their zenith on Wednesday at Parliament in Cape Town after hundreds of students breached the precinct perimeter and were later pushed back by stun grenades and tear gas. By Adam Wakefield for NEWS24.

University of Cape Town and Cape Peninsula University of Technology students had gathered in their thousands by the afternoon at the Parliament gates ahead of Finance Minister Nhanhla Nene’s mid-term budget speech.

As student numbers swelled, through sheer weight of numbers, they managed to force their way in a flood of anger-driven activism.

They reached the steps leading to the doors of Parliament, and after a brief, tense stalemate, public order police showed their hand, using tear gas and stun grenades to eventually force students back from whence they game.

Higher Education Minister Blade Nzimande and Finance Minister Nhlanhla Nene were also booed and had empty water bottles thrown at them after Nene’s speech had finished, as they tried to speak to protesting students at Parliament.

”Blade must go!” it rang out in an alley in the Parliamentary precinct, as Nzimande tried to tell the students that a ”framework agreement” was being discussed over their fees.

Students voice their own stories

At Stellenbosch University, protesting students occupied buildings on campus and held a large meeting at the Rooiplein, where students voiced their own stories of how rising costs were presenting an insurmountable challenge to their continuing education.

Later, in a meeting between management and students, management said it was never their desire to have students arrested, as occurred on Tuesday after the varsity attained a court interdict to prevent protests, which students demanded be lifted.

In Johannesburg, Wits University students, who sowed the initial seeds of student rebellion that later germinated across the country, held public lectures in the morning before later gathering at the university’s education campus.

From there, amidst a sudden downpour, they marched peacefully to and from Braamfontein, monitored along the way by metro police and police, who managed traffic as they went along.

At the University of Pretoria, all academic activities were suspended until the end of the week, as more than 1 000 students exchanged their textbooks for sneakers and boots and took to the streets to express their dissatisfaction with the proposed fee increments for 2016.

At the Mbombela campus of the Tshwane University of Technology, students joined the national #Feesmustfall campaign, causing classes to be suspended on Wednesday.

All three campuses at the University of Free State (UFS) were shut down on Wednesday in light of the protests.

According to editor-in-chief of the student newspaper at UFS, Tango Twasa, student representative council president Nokuhle Mtuli and UFS SA Students Congress president Lebo Matshosa were not seeing eye-to-eye on how to proceed with protests on Wednesday.

Ntuli wanted protesters to reconvene on Thursday, while Sasco sought for the protest on Wednesday to continue. DM