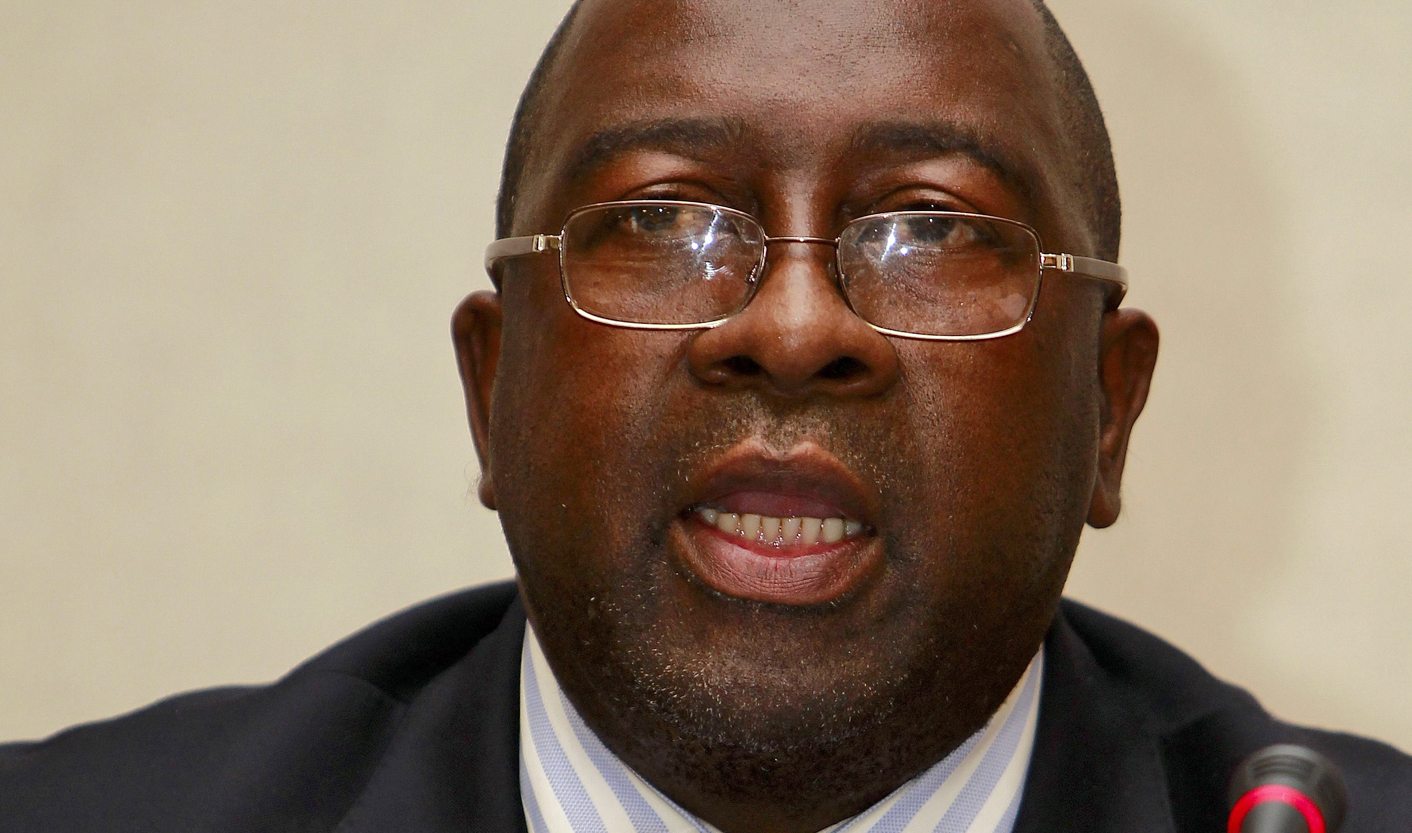 It probably won’t come as a shock to many to learn that South Africa’s economy has grown more slowly this year than was estimated when Finance Minister Nhanhla Nene gave his February Budget. Electricity woes, dwindling investment and the bloated government wage bill are all contributing to lean economic times. By REBECCA DAVIS.

“Economic growth and revenue have not been on our side,” Finance Minister Nhanhla Nene acknowledged to journalists in a media briefing before the delivery of his medium term budget on Wednesday. GDP growth was forecast at 2% in February; it’s now been revised down to 1,5% – due largely, Nene said, to the contraction of the manufacturing and mining sectors. There’s a marginal rise in GDP growth predicted for 2016, to 1,7%.

It’s not just South Africa feeling the pinch, as Treasury is quick to remind us. Wider economic currents are contributing to a global period of low growth. But there are certainly enough domestic issues to keep economists sweating. “Electricity constraints, low business confidence and declining household demand” are identified as causes of a “weak economic situation”. The bloated public sector wage bill is also a major pressure point.

Investment in South Africa is dropping, with government supplying the lion’s share of investment at the moment. The top finance officials acknowledge that dwindling investor interest is a problem. Minister Nene’s speech to Parliament on Wednesday afternoon will stress that “South Africa needs to attract substantial flows of foreign funding to ensure that investment growth can be financed”.

Treasury states: “With limited investment growth over the next two years […] there will be little support for significant employment gains.”

Tax revenues have been revised down by R7,6 billion for the year, which Nene attributed to the slowdown in GDP. Talk of the introduction of a ‘wealth tax’ has accompanied the build-up to this medium term budget. Treasury confirms that “additional taxes will be needed”, but stops short of spelling out what form these will take. Nene was similarly coy when questioned by journalists. He confirmed that a potential VAT increase had not been ruled out, and added: “The door is open for any other tax measures”.

The purpose of the medium term budget is to revise the fiscal framework for the year based on the economic realities that have emerged since the Budget was presented in February. The most significant adjustment necessary is to cover the higher-than-expected public sector wage bill, following the agreement of a 10% increase in salaries for government employees. The number of employees on government’s payroll is now sitting at around 1 316 000.

The effects of slowed economic growth cannot fail to impact on South Africa’s social problems. “Without a speed up [of] the pace of growth, South Africa will not be able to substantially reduce unemployment, poverty and inequality,” Treasury warns. The social impact of the country’s weak economic outlook is perhaps most clearly demonstrated by the “higher-than-expected” growth in the number of people accessing social grants. R13 billion will have to be added to social assistance budgets over the next three years to cover this.

2,5 million South Africans were receiving social grants in 1998; by 2018, it’s estimated that 18,1 million South Africans will be accessing a grant. As Treasury points out, however, the growth in this figure is attributable not just to poverty but also to higher life expectancy, and higher take-up of grants for children younger than 2 years old.

The Finance Minister’s speech will make reference to the current protests rocking university campuses nationally, albeit in somewhat vague terms.

“We have been reminded this past week of the challenges of financing the expansion of further education and university opportunities,” Minister Nene will say. “It needs to be said that disruption of learning is not constructive. But [Higher Education] Minister Nzimande has rightly indicated the need to strengthen student financing further, and to find solutions where current arrangements are inadequate.”

The adjusted budget estimates do contain some relevant information about student numbers in South Africa, however. Over 2015/2016, there are 1 million students enrolled in higher education institutions. Of these, 29% are studying science, engineering and technology. 28% are enrolled to study business, while 43% are in humanities. Not many stay the course in academia: South Africa produces only just over 2000 PhDs per year.

In his press briefing, Nene said that Cabinet had met briefly with Minister Nzimande on Wednesday morning. Nene said that an intergovernmental process in collaboration with Treasury was looking at longterm, sustainable finance options for higher education.

“We have actually grown investment in this space, almost trebling it,” Nene said, while acknowledging that challenges remain. (Unlike Nzimande, Nene chose to term the situation a “crisis”.) He said it was necessary to find a solution that stabilised the current crisis, while simultaneously seeking more longterm answers.

For those who fear South Africa’s drift towards a more militarised society, one budget item may ring faint alarm bells. Treasury announces that one of the “core areas of need” to which additional resources will be allocated is the financing of public order policing.

Spending on police services is set to rise by 7,3%, and spending on defence and state security by 6,7%. By way of comparison, spending on post-school education and training is currently set to grow by 6,3%.

What is government doing to try to turn the economic tide? “Indeed, we do have a plan,” Nene drily told journalists.

The energy crisis and the precarious position of a number of state-owned entities are both receiving priority attention. R245 billion has thus far been spent on stabilising parastatals including Eskom, roads agency Sanral, and South African Airways.

Investment to the tune of R542 billion is being pumped into infrastructure, with the largest part of that going to roads and public transport programmes.

Government austerity measures applied to its departmental spending has seen a 47% decrease in expenditure on catering, entertainment and events. Reforms to the ways in which services are procured for government and tenders advertised are being implemented, aimed at cutting down on red tape and corruption. Treasury notes: “The quantity of public expenditure is frequently let down by the quality of spending.”

It’s hoped that labour market reforms will help contain the amount and frequency of industrial action in the country. Briefing media, Nene stressed the need to improve labour relations and protect jobs. South Africa lost 176 000 work days to strikes in the first half of 2015. This might seem like a lot, but it’s a drastic improvement on the previous year. In 2014, 7,5 million work days were lost.

There’s good news for Public Protector Thuli Madonsela, who has repeatedly pleaded for increased resources for her office. “Proposed allocations will allow for key positions in the Public Protector of South Africa to be filled,” Treasury states.

Given the revised growth forecast, can South Africa expect bad news from ratings agencies in December? Nene said that despite the depressed economic outlook, there was no reason to expect a ratings downgrade. “But it’s not possible to please ratings agencies all the time,” he acknowledged.

In concluding his media statement, the Finance Minister said: “We are making a call to all South Africans in building a competitive and growing economy.” DM