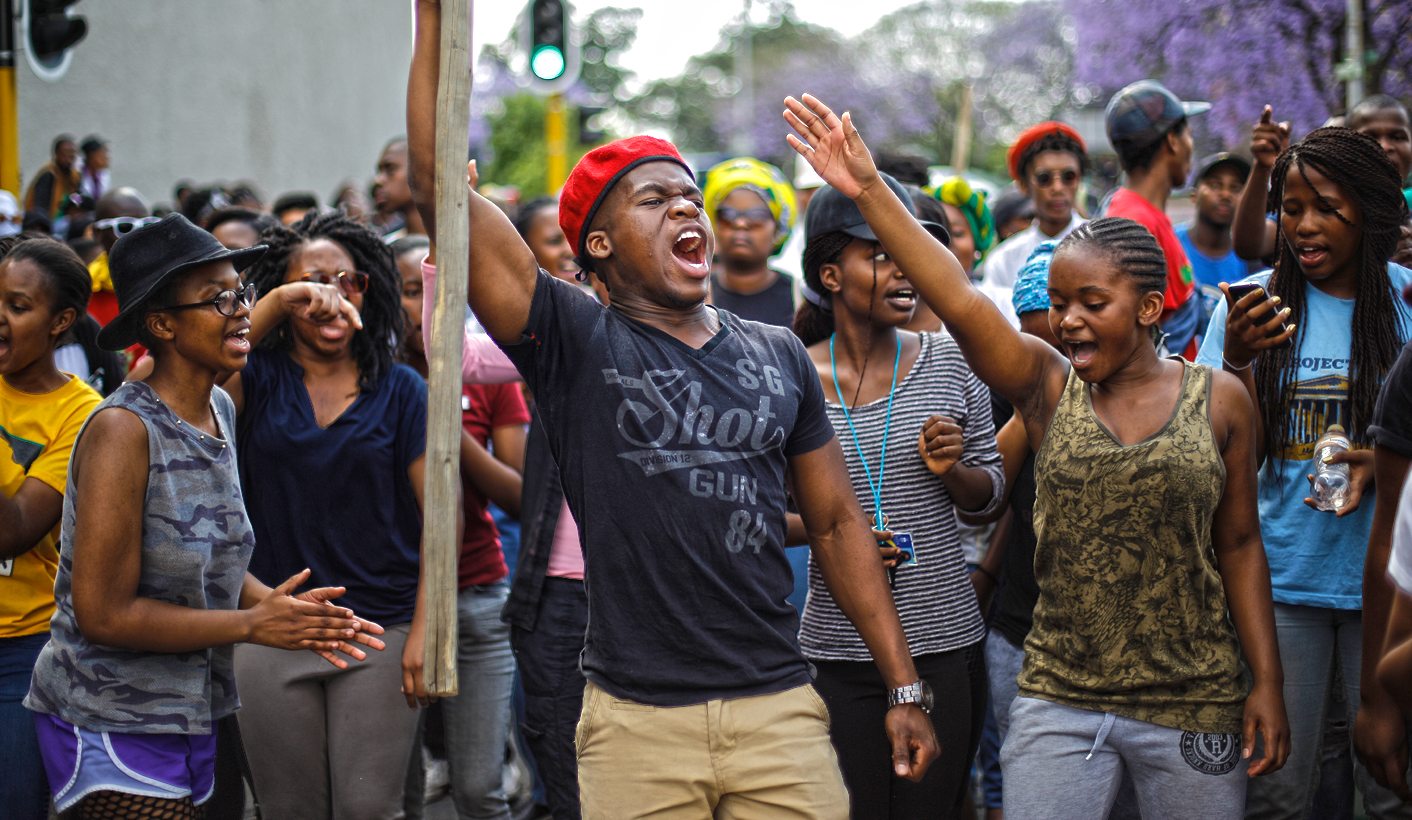 If only Finance Minister Nhlanhla Nene had a “good story to tell” when he delivers the Medium Term Budget Policy Statement (MTBPS) on Wednesday afternoon. If only that story was that economic growth is up, the deficit is down and government is able to allocate extra funding to universities and the National Student Financial Aid Scheme. Perhaps then the genie could go back in the bottle. But there is no good story and a contagion on student protests has built towards a national shutdown of higher education institutions around the country. This wave of rebellion cannot be politically manipulated. That is why it is signalling a tipping point. BY RANJENI MUNUSAMY.

Whoever thought an announcement of a 6% cap in university fees next year would lead to a cessation of student protest action has wholly misunderstood the nature of the uprising. The fact that Higher Education and Training Minister Blade Nzimande assumed that his move to announce a uniform increase, lower than the 10.5% at the University of Witwatersrand that sparked the surge of protests, would be seen as a gesture of good faith reveals a fundamental misunderstanding of the student rebellion this whole year.

The trigger of #RhodesMustFall in March to #FeesMustFall now is a mass awakening of the country’s youth, unprecedented in post-democracy South Africa. This uprising goes to the heart of the failure of the political system – the inability to lift the burden of being black and poor in a country that still favours those who are white and privileged.

The issues driving the student anger and rebellion go far beyond the unaffordability of higher education for poor black families. It is having to slot into an education system that emulates the society we live in – a lack of transformation, the perpetuation of inequality and prejudice against the financially weak.

South Africa is accustomed to protest action, from communities demonstrating over service delivery failures to labour disputes. But this student protest action has invaded the comfort zone of the middle class. Academic institutions are the incubators that produce new generations of middle class citizens who have the best opportunity to become productive members of society. There has never before been such a synchronised manoeuvre against the middle class establishment to the point of total shutdown.

These young people are not only rebelling against the way their institutions operate, but against the system that recycles poverty. If children grow up in poor households, they have limited opportunities to access proper education, their career choices are diminished and they end up in poorly paid jobs or are unemployed. Their children are then relegated to the same fate. The ANC’s proposed policy of free higher education for the poor was seen as a way to stop this cycle running in perpetuity but like much else, the implementation is bogged down by an ineffective state.

The protests over fee increases ramps up the pressure on government to deliver what the ruling party promised in Polokwane 2007. There is no easy way to deal with the protests as they are not directed at a central point. What started off as a sit-in at Wits last week led to protests in solidarity on other campuses. But in the past 48 hours, students have begun protesting at universities around the country, creating a network of flashpoints. Police aggression has served to inflame the situation as the higher education sector heads for a national shutdown.

What is apparent is that these protests cannot be politically controlled, bullied or manipulated. Democratic Alliance leader Mmusi Maimane tried to maximise on the student discontent but was booed and chased away at the University of Cape Town on Tuesday. Other national political party leaders could face the same humiliation if they try to exploit the situation.

While student political organisations are leading the protests at universities, this is turning out to be a spontaneous uprising kindled by bottled up frustrations over financial pressures, the lack of transformation and fears about the future. But these students are not only acting on their individual troubles; they are socially and politically conscious and acting on behalf of next year’s crop of university entrants who will be prejudiced even before they enter the high education system.

The more resolute this student movement becomes, the more politicised their actions are likely to become. And a politicised youth could cause all sorts of trouble for the political establishment outside of party politics. It will take astute footwork and proper engagement with the student leadership to prevent the situation boiling over.

However, the Higher Education Minister and several vice chancellors he met on Tuesday believed that offering a fee increment in line with the Consumer Price Index would be sufficient to pacify the students. When he announced the capping of the 2016 fee increase at 6%, Nzimande said President Jacob Zuma had “expressed relief” that stakeholders were trying to find solutions to the wave of protests.

“The president expressed relief that at least there seems to be possibly some light at the end of the tunnel, because the parties have come up with a framework which provides a compromise. The president, by the way, is a very skilled and highly experienced negotiator so he understands that this is important. I can’t speak for the president but he understands that it is important that the parties find each other so that we can stabilise the situation in our universities,” Nzimande said.

But by Tuesday night, student bodies were already rejecting the 6% increase and more universities around the country were announcing shut downs after their students embarked on protests.

In this context, Finance Minister Nhlanhla Nene will present the medium term financial outlook on Wednesday afternoon. With growing pessimism about South Africa’s economic future, Nene will be under pressure to fund the ANC’s development plans, emphasised at the recent national general council, particularly on health and education.

While the National Treasury has been attempting to stabilise debt, demands on the fiscus is growing, including for more funding of universities and the National Student Financial Aid Scheme, which provides loans to poor students. If Nene has to continue the line of the February Budget to stick to conservative spending and belt tightening in the MTBPS, Zuma’s “relief” may be short lived.

When the xenophobic attacks spread across parts of the country earlier this year, it was pinned down to economic pressures in communities manifesting in violence and looting. The government had to resort to deploying the army to assist the police to bring the situation under control and deport foreign nationals.

The wave of student protests are also driven by economic pressures, coupled with other frustrations. Responding with brute force against young people is likely to backfire and provoke further anger. It should also be borne in mind that unlike the foreign nationals, these students would be voting in the next elections.

These upheavals should be setting off alarm bells that there is a growing restlessness in the country. Whether it is strike action for living wages or xenophobia or student protests, issues resonate and spark rolling action in other parts of the country. South Africa seems to be sitting on a powder keg with unheeded discontent and impatience with poverty and inequality.

Like every other discontented constituency, South Africa’s students want real answers. Not empty rhetoric, half-baked plans and promises that will not be fulfilled. Nene might not have the answers to relieve the financial squeeze but somebody had better come up with some.

An economic turnaround is needed or we are heading for more upheaval and turmoil. Based on the events of the last week, an uncontrolled revolt is not that far off. DM

Photo: Some of the thousands of students from Wits University demonstrate during another day of demonstrations against fee increases at their university, Johannesburg, South Africa, 20 October 2015. The Wits students have been demonstrating for days against a proposed fee increase and has spread to other major universities in the country. EPA/KIM LUDBROOK