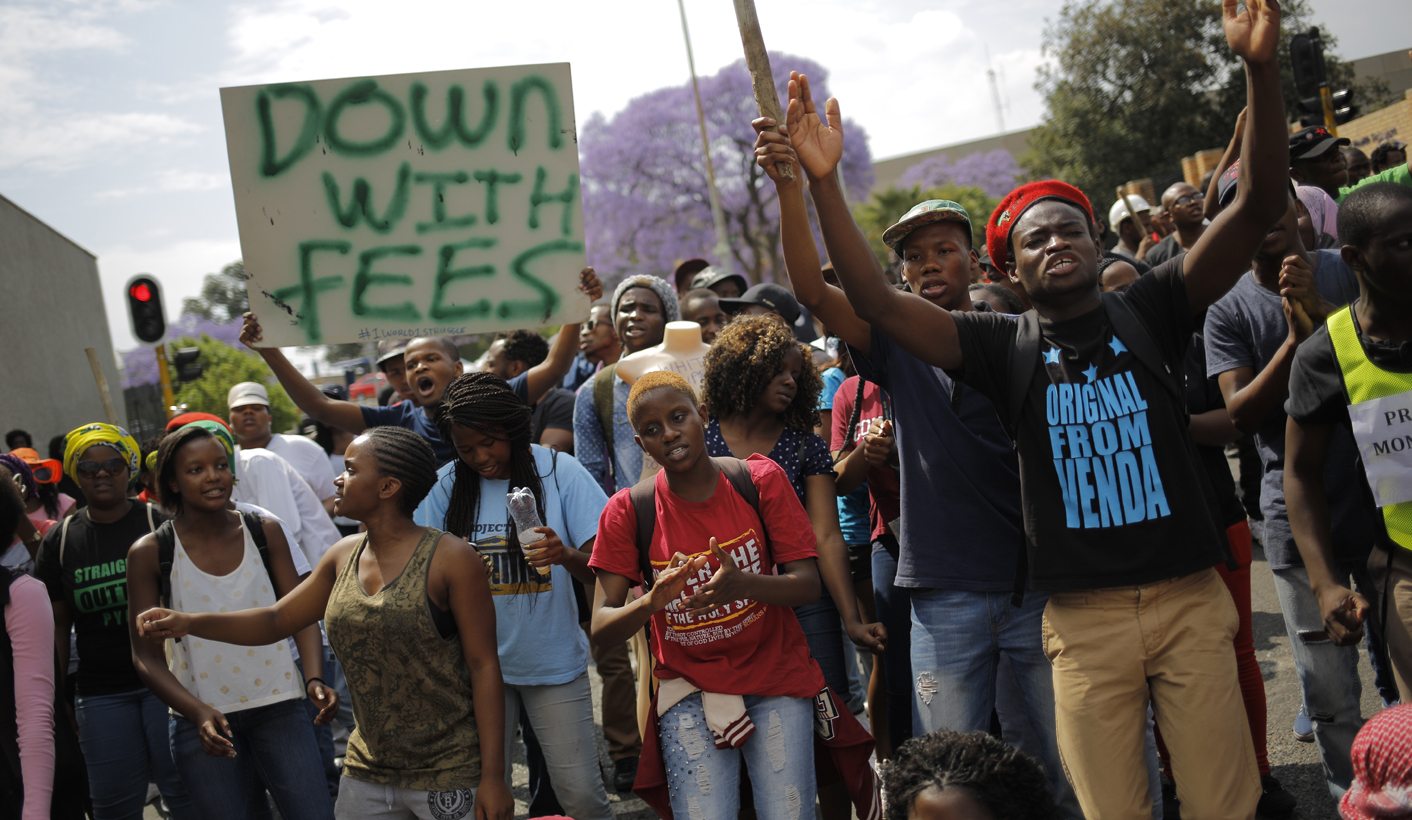 Higher Education Minister Blade Nzimande's agreement with university vice-chancellors for an inflation-linked increase in fees looks as if it will do little to dampen student protests. At the University of Witwatersrand, where the latest protests began, student leaders were adamant that they would continue the fight. By GREG NICOLSON.

Occupying Senate House, which students have renamed Solomon Mahlangu House, on Tuesday evening, outgoing University of the Witwatersrand (Wits) Student Representative Council (SRC) president Shaeera Kalla said students were not expecting much from Higher Education Minister Blade Nzimande’s meeting with university vice-chancellors on Tuesday. They were still disappointed. “I think we’re very very disappointed and disgusted about the lack of seriousness around this issue,” said Kalla.

“Wits’s movement is really reaching its peak in terms of students not wanting to give up,” she added, noting the challenges facing the protests against fee increases that have lasted almost a week. “They’re making it very hard for us for us to be productive and peaceful.”

The university has provided day-to-day updates since the protests began, continually announcing closures despite its hopes to re-open. On Tuesday, while-vice chancellor Adam Habib joined tertiary leaders in a meeting with Nzimande, and student groups planned a day of mass action on Wednesday, Wits took the decision to close for the remainder of the week.

The minister announced that 2016 fee increases would be capped at an inflation-linked 6% and a task team has been established to investigate the issue of fee increases and report back within six months to advise on future hikes. The protests, which started at Wits over a proposed 10.5% increase in fees, has spread to other universities and the South African Students Congress has called for protests at tertiary institutions across the country on Wednesday.

“Hopefully that will go somewhere in enabling some heat to come out of the system,” Habib said before boarding a plane back from Cape Town on Tuesday night. He hoped the help from the Department of Higher Education and agreement on lower fee increases and the task team could promote negotiations with the university’s stakeholders.

After a day in which they demonstrated at the university’s Parktown campus, Wits students were still discussing how to proceed on Tuesday evening but leaders dismissed Nzimande’s fee agreement. Kalla noted that the deal, which excluded students, showed university managements still do not understand the issues.

“We’re still soldiering on. We have not changed anything. We are not going to stop what we are doing. We are still going to be shutting down universities,” said Wits Economic Freedom Fighters leader Vuyani Pambo. Former SRC leader Mcebo Dlamini added: “Our main objective was one of a 0% increase. We haven’t achieved that so what I can say is we haven’t achieved anything because even this thing of 6% of Blade Nzimande’s and the meeting with his friend Adam Habib is not an achievement. But what I can say is we’ve united black students.”

The last Shirona Patel, head of communications at Wits, heard was that the university had invited students to negotiate again but its council would not negotiate in a crowd. She said the closure of the university for the week was a precautionary measure, particularly to avoid situations like last week where protesting students antagonised others from leaving campus, raising concerns and tensions among parents and staff.

Patel said there was one incident of violence on Tuesday where a demonstrator smashed a car window, after which he was called to order by other students.

“We are still going on with the non-violent strategy and now what we are going to do is we know we are going to win. We know are going to get the 0%,” said Dlamini. He said the attack on the car of a motorist who sped through a group of protesting students on Monday was unfortunate but the driver was clearly trying to provoke students.

“The students in the protest are turning the other cheek,” Pambo said on Tuesday. “There was no way we could turn the other cheek at that point,” he said referring to incident. “In essence students were provoked beyond measure … What happened yesterday is a provocation by a white right-wing young man who decided he is going to kill black people.”

With exams 10 days away, both the university and students are keen to prepare. Professor Andrew Crouch, deputy vice-chancellor in charge of academics, said: “We do have plans in place for the examinations. We still hope the examination will precede.” He didn’t want to divulge the preparation plans until they are discussed with students but meetings were held on Tuesday on how the various faculties should proceed.

Meanwhile, protesting students are organising their own study sessions. Kalla said students occupying Senate House are trying to study but the internet has been switched off, no buses are running to campus and they haven’t been allowed to shift the tables. “Let me tell you, the university is trying to reduce the morale,” said Dlamini, noting that protesting Wits students are now trying to balance organised study groups with demonstrations.

On Tuesday evening, Wits students were still discussing how to proceed and whether to join the proposed national protests on Wednesday as the issue continues to spread to campuses around the country. DM

Photo: Some of the thousands of students from Wits University demonstrate during another day of demonstrations against fee increases at their university, Johannesburg, South Africa, 20 October 2015. EPA/KIM LUDBROOK.