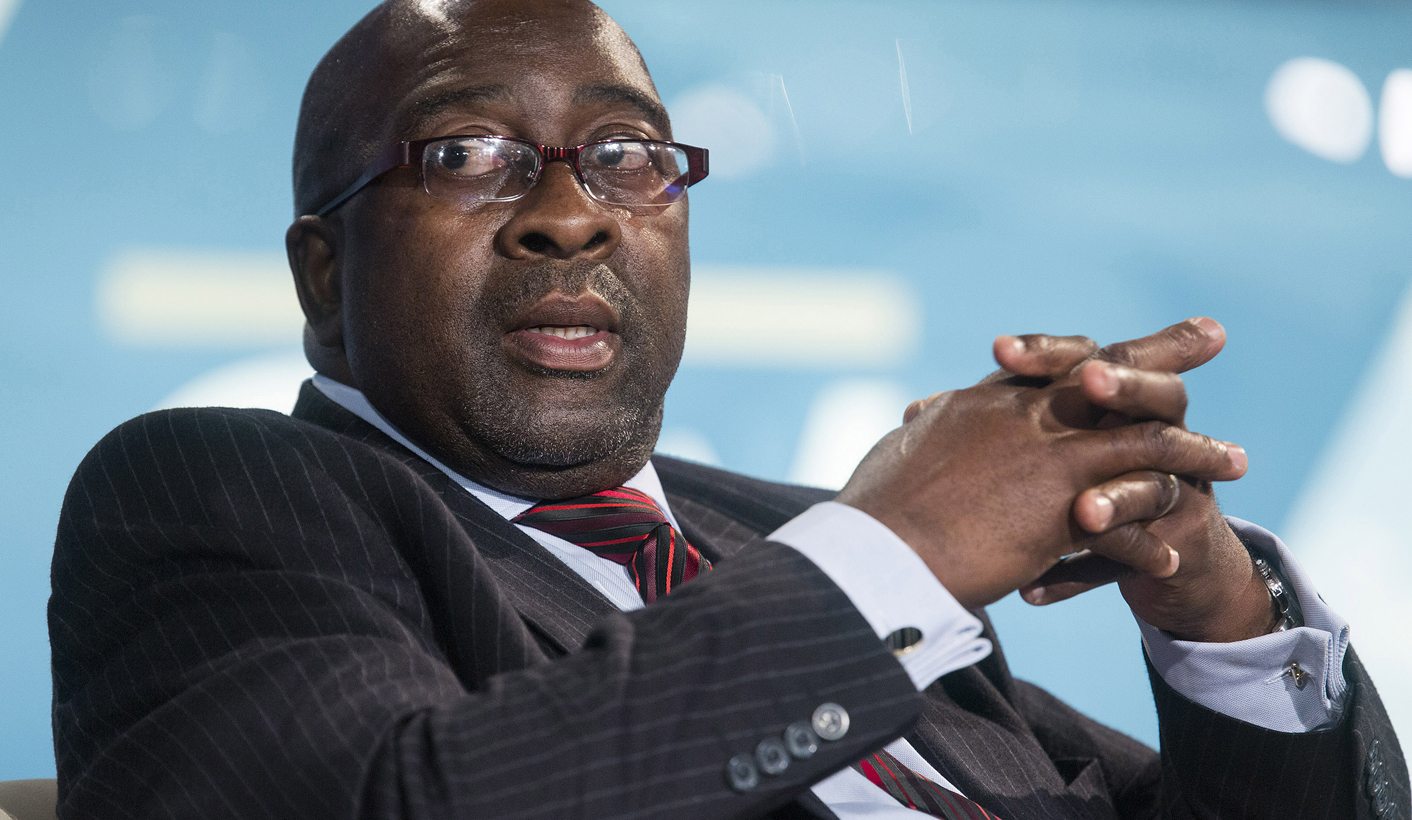 When he delivers his second Medium-Term Budget Policy Statement on Wednesday, Finance Minister Nhlanhla Nene will have to survey the scene, tell us where our spending habits are leading us, what forecasts there are for growth and generally what the state of the economy is. However Nene sugarcoats the pill, we know we are in trouble and that inequality is biting even when we thought we could keep it at bay with a social protection network and better ‘service delivery’. By JUDITH FEBRUARY.

President Jacob Zuma made a right royal hash at the recent African National Congress (ANC) national general council meeting when he seemed unable to articulate the ANC membership numbers. We are as inured as we can be to Zuma’s gaffes now. He is what former US vice-president Dan Quayle was to the word ‘potato’ at a spelling bee.

At least it is not Zuma who is heading the finance portfolio within the government, we opine, relieved. For we can be quite certain that Finance Minister Nhlanhla Nene will not be fumbling the numbers when he comes to Parliament on Wednesday to deliver his second Medium-Term Budget Policy Statement (MTBPS). The affable Nene took over the reins of finance last year in a tough political and economic climate. Unlike former finance minister Trevor Manuel, who had Thabo Mbeki’s full support and Pravin Gordhan after him, who had heft within the ANC, Nene’s job comes with the hazards of a president prone to be moved by factional interests. Thus far the Treasury has escaped the foolishness that say, for instance the mining and energy portfolios have been subjected to. Even so, the leadership of the South African Revenue Service has come under increasing scrutiny that might pose a threat in future. Equally, Nene will have to get his hands dirty in the costing of any nuclear deal. He is already on record as saying that any deal must be affordable. He will need all his wits about him to square up to Energy Minister Tina Joemat-Pettersson (who seems to enjoy an extraordinarily high level of political protection), as well as the president himself and the networks of patronage around him. Economic policy making in general in democratic South Africa has remained appropriately insulated from short-term politicking and opportunistic populism.

All that aside, on Wednesday Nene again has to survey the scene, tell us where our spending habits are leading us, what forecasts there are for growth and generally what the state of the economy is. Over the years, the MTBPS has rightly come to be regarded as a credible and significant articulation of the government’s sense of the medium-term economic outlook. Given its economic projections, the MTBPS has presented fiscal policy parameters and an indication of the division of revenue, as well as of broad shifts in spending priorities, for the coming three years. It has enhanced the transparency and predictability of South African economic policy.

However Nene sugarcoats the pill on Wednesday we know we are in trouble and that inequality is biting even when we thought we could keep it at bay with a social protection network and better ‘service delivery’. Something was always going to give and social stability is becoming all the more tenuous as workers strike, the mining sector plummets into depression and students demand free education, where money is tight yet corruption has soared.

The 2014 MTBPS provided a stark, honest assessment of the risks still facing the South African economy and budget, and of the continued inability of the government to achieve even close to an optimal value for money in using funds. Nene’s maiden speech in 2014 took place against a rather gloomy international and domestic outlook and not much has changed in 2015. In fact, some might argue that things are looking far bleaker. In June this year, ratings agency Fitch cut its growth forecast for South Africa though we managed to survive a downgrade. The country’s budget and current account deficits were likewise red-flagged by Fitch. It is crucial that Nene shows we are willing to stay the course and implement economic plans specifically related to the ongoing power crisis. Medupi coming on-stream might help somewhat. Of course, the fact that the National Development Plan (NDP) still remains largely contested is problematic and affects the implementation of government policy choices as it is so often referred to yet not quite brought to life. This is seen in the contradictions surrounding energy policy and the choices regarding, for instance, nuclear power, to name but one example.

We can once more expect Nene to talk sternly about “trimming the fat” and cutting back on wasteful expenditure and corruption. Of course there are factors not under Nene’s control, for instance energy policy, the poor corporate governance and mismanagement within state-owned enterprises, whether they are able to balance their budgets and ultimately, his colleagues’ commitment to cutting expenditure and corruption. Last year’s language was of a “collective Cabinet commitment”; probably Nene’s way of trying to ensure that his fellow ministers adhere to budgets and that there is less waste. Then he announced the predictable freezing of vacant posts in the public service, an end to consultancy spending and general austerity across ministries and dealing with waste and corruption at local and provincial level. We will no doubt hear a lot about this again but what has the impact been since last year’s MTBPS and the Budget speech in February?

How can we “do more with less”? It is likely that Nene will again have to do a careful balancing act between expenditure and revenue. To meet the goals of the NDP, the economy would have needed to grow by 5% at least, indicating quite how far we are from these goals. Last week Kuben Naidoo of the Reserve Bank estimated that the economy would grow by 1.5% this year; a real problem in the context of South Africa’s stubbornly high unemployment levels.

Even in the current context, where value for money and departmental savings receive a great deal of attention, significant under-spending can be identified in some national and provincial departments. In particular, the pervasive tendency of provinces to underspend on functions other than health, education or social development is an additional cause for concern.

Evidence already suggests that many government departments struggle to find the skilled personnel they need, and service delivery fails across all three spheres of government as a result. What should therefore be restrained are increases in wages, and in particular at senior levels. Recognition should be given to the fact that middle and higher management salaries in the South African public sector may well be too high, relative to productivity, and that salaries which are the equivalent of the private sector rate are not appropriate for a developing country marked by inequality such as South Africa.

Social spending on health, education and other functions that enhance individual capabilities, coupled with economic infrastructure spending, represent the basic consensus on what governments can do to create jobs and promote development. The government has committed to infrastructure spending, however, events in the past few years have demonstrated the precariousness of partnerships and business-labour relations in key sectors of the economy. This does not bode well for job creation, which requires much more effective co-operation between sectors. The vision of investment-led growth can be achieved if South Africa is able to mobilise the public and private sectors to work together more effectively. The government has opened the way for a range of increased private sector investment initiatives, such as, special economic zones, independent power projects, cogeneration power projects and renewable energy projects. Yet one has to ask whether this is enough when immediate needs relating to poverty and unemployment are so pressing, with an increasingly impatient populace champing at the bit for the promised ‘better life’.

No one will envy Nene on Wednesday because whatever he says, those words and his actions are only a part of the story. He will need the backing of his boss and his colleagues to get South Africa out of the economic quagmire it is in and he will also need to convince the private sector that it bears some responsibility too for the economic challenges we face. Marikana remains an example of how hard it is to ‘legislate’ accountability as those who were at the helm in August 2012 when the tragedy occur continue in their positions of privilege whether here or abroad. Last week’s Grayston Drive bridge collapse was another example of the possible cutting of corners by the private sector. If Nene’s Cabinet colleagues are doing the same, cutting corners and evading accountability, the private sector will have no inclination to take heed. And so the project of building a just society becomes ever more out of our reach.

Wednesday’s MTBPS is as much about numbers as it is about creating a society which is fundamentally less skewed. But only if we join the dots between our structural constraints, grinding poverty and unemployment, waste and corruption as well as our inability to forge an elusive social compact based on trust, will be able to start forging a more equal future. DM