The Springboks engineer the great escape against Wales 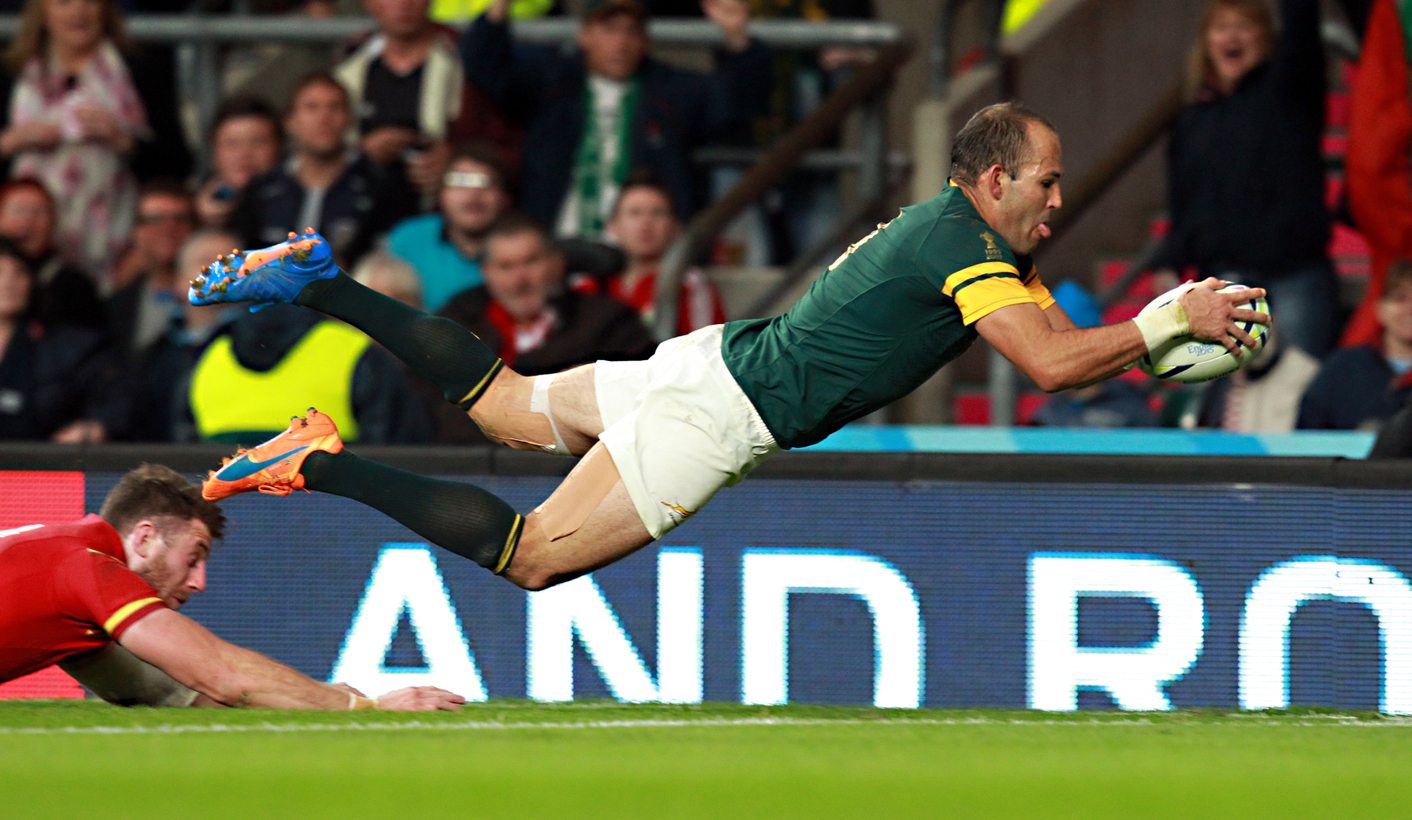 South Africa snatched victory from the jaws of the defeat at Twickenham on Saturday night to ensure they meet the All Blacks in the semi-finals of the 2015 Rugby World Cup. As we have come to expect from Bok rugby, it wasn’t very pretty and it very nearly wasn’t effective either. By ANTOINETTE MULLER.

If ever Heyneke Meyer had means to justify his “innovation is not always what wins games” approach, it was South Africa’s quarterfinal against Wales. The Springboks are through to the semi-finals of the Rugby World Cup after a nail-biting 23-19 win over Wales at Twickenham on Saturday.

The Boks, infinitely predictable as usual, engineered a great escape against a feisty Wales side which managed to get this far against all odds. Wales’ defence was always going to be their greatest asset – they had conceded just two tries this entire tournament – and they used it against South Africa with aplomb. In the end, it was one try – a genius bit of work between Duane Vermeulen and captain Fourie du Preez – that made the difference.

It took until just a few minutes before the final whistle blew for South Africa to break through the Welsh defence. A cheeky off-load from the scrum, the kind of casual thing you might expect to see at a knockabout game on a Sunday afternoon, saw Du Preez make a manic run for the whitewash to put South Africa ahead. While the relief was palpable, it was also important because it was a piece of genius improvisation which would probably, under normal circumstances, make the conservative Meyer furious.

This RWC2015 quarterfinal was never going to be a pretty game. It was never going to be silky running rugby dominated by skills. For the bulk of the first half, it was all about physical dominance and perseverance and for the first ten minutes, it was Wales who were stronger. For South Africa, it was imperative to get points on the board first. Statistically, the Boks almost always win when they score first and while it’s highly unlikely that they pursue such motivation, scoreboard pressure can get to any team, especially when it comes to knockout time. Handrè Pollard’s kicking started off on point, but neither side ever looked convincing for more than 15 seconds at the time.

It took until almost half way into the first half before Wales’ running game had the chance to flourish. Dan Biggar, the Welsh flyhalf, had an immense game and deserves an equally immense credit for his vision, which gave Wales the lead for the first time in the game in the 17th minute. Biggar spent most of the evening chipping into congested areas instead of simply into space. In the 17th minute, it was precisely this kicking that led to the Wales try. Biggar kicked ahead, caught it and passed it onto Gareth Davies, who ran unopposed to the try line.

From their side, South Africa responded to Wales’ crafty manoeuvres the only way they know how: by suffocating them. As the pressure continued to build, both sides became more error-prone and, concerning for South Africa, some of that pressure manifested itself in Pollard’s erratic kicking. The pivot missed two penalties from within his range and although he managed a drop goal as repentance, but the lack of big match temperament is a possible concern. Far too often on Saturday, the Boks looked disorganised and while their bumper car rugby has never been pretty, this time, it very nearly wasn’t effective either.

The skipper saw it differently, though. Where some will see stubbornness of smash-and-grab rugby, he saw resilience.

“It was an awesome feeling, it was tight game I’m just delighted,” said Du Preez.

“We just needed to keep pushing, I could see some of their guys lying down. We’ve got two more games, we’ve learned from the Japan game,” said Du Preez.

Some will argue that the Boks haven’t actually learned anything, but at least the coach was happy to acknowledge what a little moment of innovation can do:

“I would like to kiss Fourie. I have always said coaching is overrated. You have to pick players with character and who perform under pressure,” Meyer said. “That try was just pure genius.”

The Boks will now face New Zealand in the semi-finals next weekend. While their determination got them over the line this time, much improvement is needed if they hope to become unlikely finalists at this year’s Rugby World Cup. DM