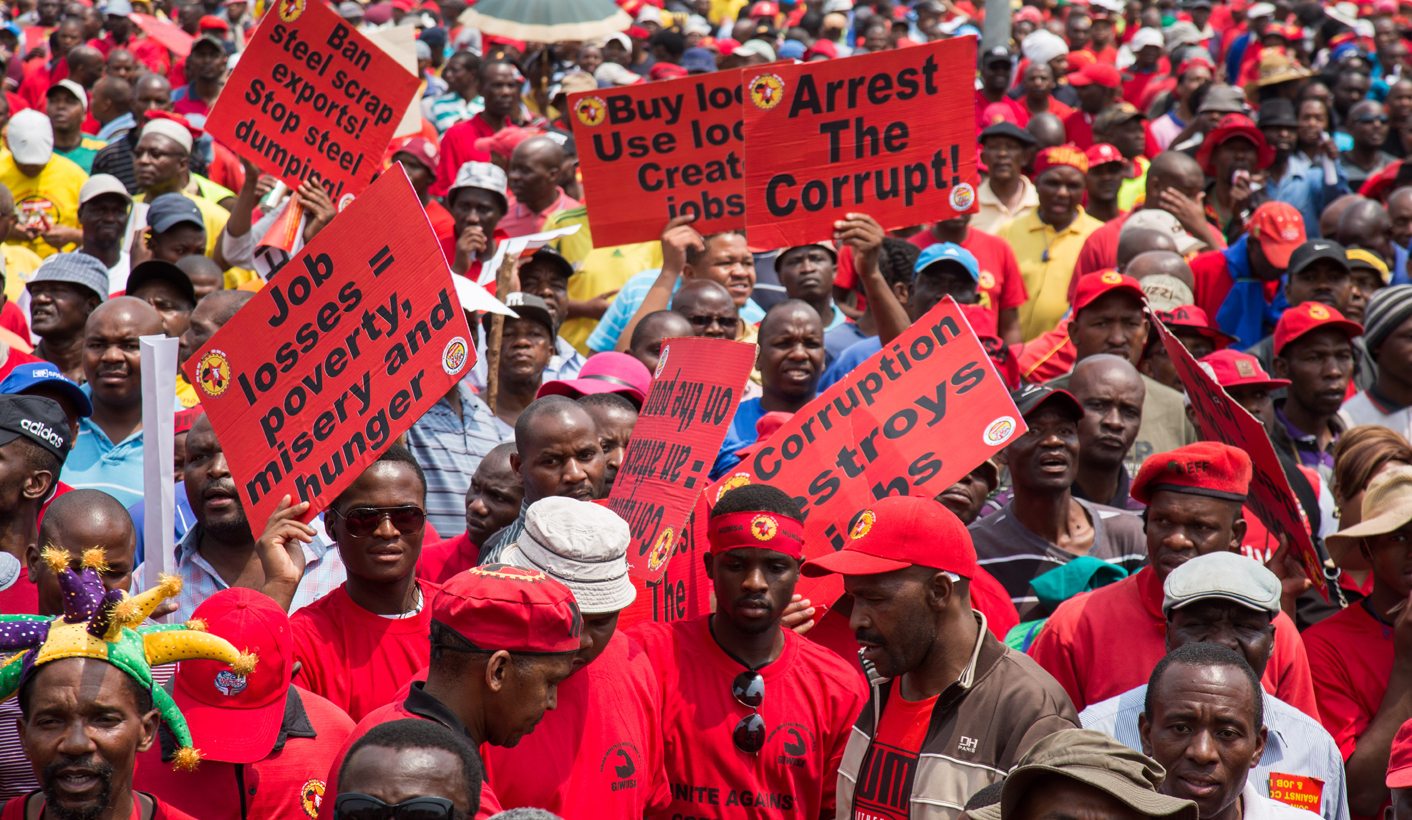 Around 5,000 people joined Wednesday’s second attempt at an anti-corruption march intended to draw up to 100,000, according to the organisers. Poor organisation and obvious stalling tactics by the National Economic Development and Labour Council had forced organisers to postpone workers’ involvement by two weeks, splitting the event in two and weakening its impact. But the unions used the opportunity afforded by Wednesday's event to introduce a new finance union, as well as a breakaway faction from the South African Municipal Workers' Union. By SHAUN SWINGLER and DIANA NEILLE.

Union heavyweights used Wednesday’s anti-corruption march to the Gauteng Legislature and the Chamber of Mines to publicly introduce a new finance union, as well as a breakaway faction from the South African Municipal Workers’ Union (Samwu).

Taking advantage of the public platform and the presence of several thousand workers predominantly aligned to the National Union of Metalworkers of South Africa (Numsa), former Congress of South African Trade Unions secretary-general Zwelinzima Vavi announced the breakaway formation of the Democratic Municipal and Allied Workers’ Union of South Africa (Demawusa), as well as the Finance Union of Workers.

Expelled shop stewards from the troubled Samwu formed the Demawusa faction, citing the unfair dismissal of Samwu leaders from across several provinces last year as the reason for the breakaway.

Samwu fired 160 of its provincial and regional leaders after they questioned the disappearance of more than R130-million from the union’s coffers. Three Samwu members were arrested at their head office by the Hawks on Tuesday, purportedly in connection with the missing funds.

Addressing a peaceful crowd in Mary Fitzgerald Square in Johannesburg, Vavi used the anti-corruption banner to rally workers, despite his own admissions of widespread factionalism and infighting across the unions.

“We want an end to corruption because we see a very direct relationship between (it) and the state of our economy, that results in us losing our jobs by the thousands,” he told the crowd.

“Over 330,000 workers will lose their jobs in the near future unless we stand up and mobilise.”

Around 5,000 people joined Wednesday’s second attempt at a march that was intended to draw up to 100,000 in protest over broad-based corruption, according to the event’s organisers. But poor organisation and obvious stalling tactics by the National Economic Development and Labour Council forced organisers to postpone workers’ involvement by two weeks, splitting the event in two and weakening its impact.

While the first march on September 30 was dominated by members of the Economic Freedom Fighters in Johannesburg, Wednesday’s march was notably focused on pushing workers’ interests, despite reassurances from the outset that the event had no political agenda.

“The saddest part is that unions, because of the death of internal democracy and the marauding and the corruption, are fragmenting,” Vavi said in a phone interview.

“And when you have externally engineered political shenanigans to manage and to control unions, workers will respond in a manner that they have responded (in) before.

“It’s not the first split and it’s not going to be the last one. And everywhere there’s talk of workers moving out and creating their own things. It’s a moment,” Vavi said.

“We are calling on this government to protect and defend jobs for workers. Our primary responsibility is to secure your jobs (and) to make sure your working conditions improve,” Jim told the cheering crowd. DM

All photos by Shaun Swingler.