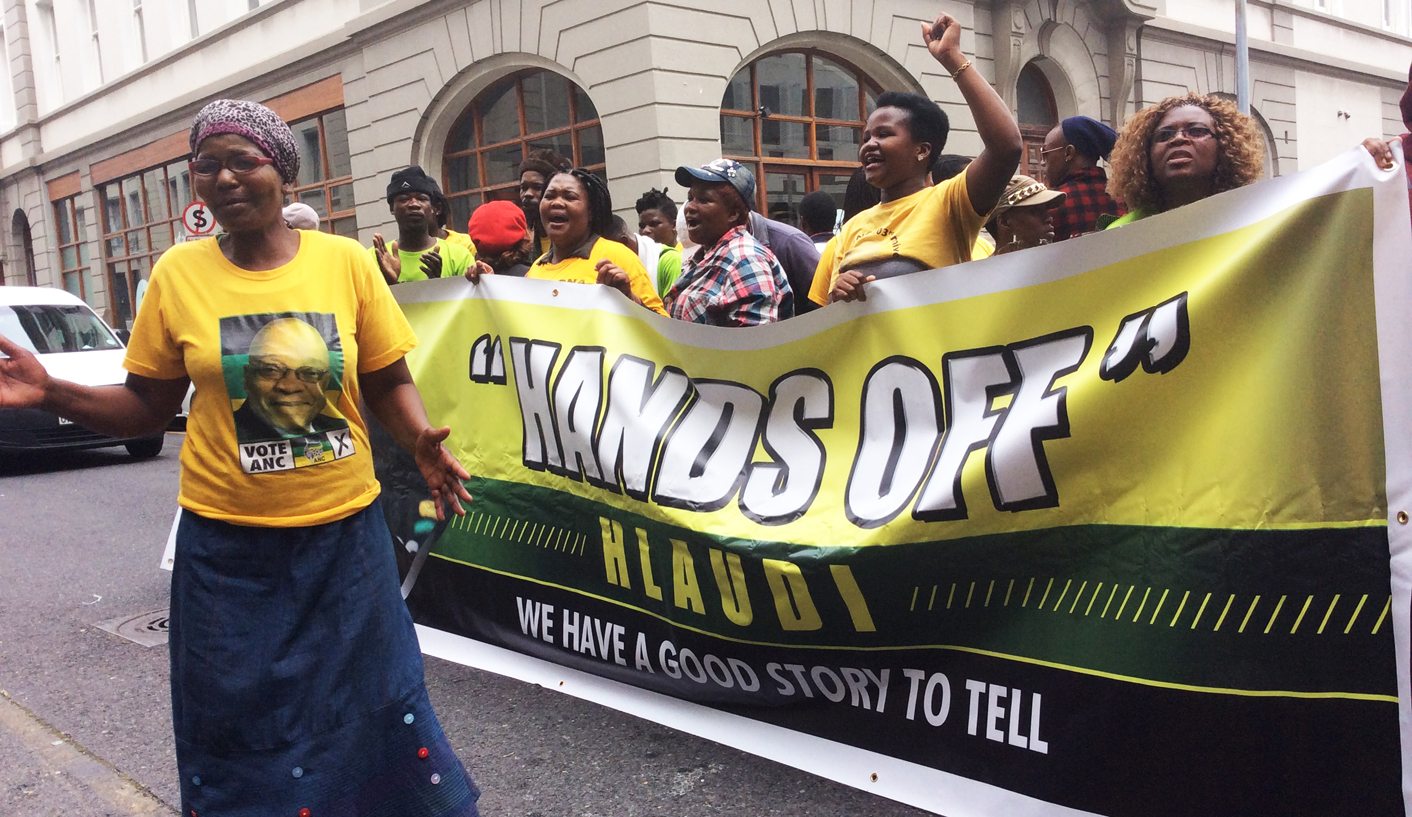 The Supreme Court of Appeal may have upheld an order that the state broadcaster’s chief operating officer, Hlaudi Motsoeneng, be suspended, but Motsoeneng still has his job. Just. In addition to the disciplinary proceedings finally instituted by the SABC, Motsoeneng is now fighting multiple separate legal battles – while the Democratic Alliance has warned that there’s another on its way on Thursday. By REBECCA DAVIS.

“[Hlaudi] Motsoeneng is not allowed to be working at the SABC today,” counsel for the Democratic Alliance (DA) Anton Katz told the Western Cape High Court on Wednesday. But the SABC’s chief operating officer is still holding onto his job, and the DA has warned that it’s had enough of what the party sees as a blatant flouting of the law.

This doesn’t mean that Motsoeneng is in the clear with his employer. Disciplinary proceedings have been initiated against Motsoeneng, it emerged from court papers this week. His disciplinary hearing is set down for 30 October. Currently, the SABC is staying mum on what exactly is on his charge sheet.

The court papers referred to above are not part of the matter that was being heard by the Western Cape High Court this week. Motsoeneng is currently fighting legal fires on numerous fronts. The news about the disciplinary hearing was contained in an affidavit he has filed with the Constitutional Court for leave to appeal the Supreme Court of Appeal’s (SCA’s) judgment last week upholding his suspension and bolstering the powers of the public protector to recommend remedial action.

His separate legal battle this week sees the Western Cape High Court play host to the DA’s attempt to have his appointment as chief operating officer set aside. And now it looks as if the state broadcaster and Motsoeneng will face yet another legal challenge.

“[An] urgent application will be launched tomorrow, for contempt of court,” DA federal chairperson James Selfe told journalists outside court on Wednesday. “We believe that there was a very clear instruction from the SCA. The SABC has only implemented part of it, not all of it, and we believe that constitutes contempt and we will make the case accordingly.”

Earlier, the DA had announced an ultimatum: the SABC had up till 2pm on Wednesday to suspend Motsoeneng, and after that could expect the application outlined by Selfe. By the time court adjourned, no suspension seemed forthcoming. By Thursday, then, it looks like the SABC will have one more legal woe to add to its Motsoeneng-related pile.

At one stage during court on Wednesday, Katz rhetorically inquired why the SABC seemed so dead-set on fighting the suspension of Motsoeneng. They think “he’s the best thing since sliced bread”, Judge Dennis Davis quipped in response. Katz replied that the board should try watching Al Jazeera or CNN some time.

The DA’s counsel stressed that their concerns were with the manner in which Motsoeneng was appointed to his post, including the fact that no other applicants were interviewed for the post. “We as a matter of principle have no problem with Mr Motsoeneng one way or the other,” Katz assured Davis.

“You could’ve fooled me,” grunted the judge.

Davis, who has on several occasions in the past expressed frustration over the judiciary being pulled into matters affecting the executive, made it clear at multiple points this week that his job is not to rule on whether Motsoeneng is a “bad seed”, or to determine the merit of the public protector’s report. The judge is tasked with determining whether Communications Minister Faith Muthambi – another figure who is currently under siege – acted rationally in deciding to appoint Motsoeneng to his position on a permanent basis.

Motsoeneng’s lawyer, Norman Arendse, argued this week that his client’s appointment was indeed rational. He contended that both the SABC and Muthambi were aware that Motsoeneng did not have a Matric certificate, but they considered Motsoeneng to have additional experience and attributes which qualified him for the job.

Motsoeneng’s counsel has also sought to argue that the public protector’s report on his appointment and performance contains a number of “grave” errors. Arendse implied that these might have been the result of Madonsela failing to interview all the relevant witnesses.

Arendse’s team opened their heads of arguments: “This case involves the delicate balance between inappropriate interference by the court in the exercise of executive power, and the need to ensure that public power is exercised rationally and lawfully.”

The papers also suggest that proceeding with this review application before the Constitutional Court has dealt with the SABC’s appeal against the SCA judgment may be premature. Such an approach “creates a risk of this honourable court making a finding in relation to the same issues which are pending before a higher court, and which ultimately may potentially reach a different conclusion”, the papers state. “It is not in the interests of justice to proceed in such a piecemeal fashion and our courts have regularly cautioned against such an approach.”

The DA reportedly wants Davis to make a ruling on this matter not just before the Constitutional Court hears the SABC’s appeal, but also before Motsoeneng’s disciplinary hearing is held.

The party has argued in its court papers, in contrast to Motsoeneng’s counsel, that the case is “simple”.

The DA contends that Motsoeneng’s appointment as chief operating officer was both “procedurally and substantively irrational”, since the decision was taken despite the public protector’s recommendation that Motsoeneng should face a disciplinary inquiry. The decision was also “unlawful”, since it contravened SABC regulations stipulating that a short list of candidates should be drawn up and interviewed for the post, and it also flew in the face of a court order prohibiting any permanent appointment.

“In light of these multiple violations and patent irrationality, the only conclusion to draw is that the decisions were taken for an ulterior purpose and because of bias in favour of Mr Motsoeneng,” the DA states.

The party is asking the court to declare the decision to appoint Motsoeneng inconsistent with the Constitution, and to recommend the appointment of a suitably qualified chief operating officer for the SABC within 60 days of the court order.

Tempers flared at one point during Wednesday’s proceedings, when Motsoeneng’s lawyer accused Davis of racism.

On Tuesday, the fact that Muthambi had commissioned a report on Motsoeneng by Mchunu Attorneys was the subject of debate. The report exonerated Motsoeneng, but it has been called into question because Mchunu Attorneys have also represented the SABC in various matters – including their SCA appeal – and therefore cannot be said to be independent.

Davis had asked if such a report might have carried more weight if it had been compiled by someone like Advocate Wim Trengrove.

On Wednesday, Arendse implied that racism lay behind the judge’s question: that he was suggesting the report would be more authoritative if it had been drawn up by a white advocate rather than a black law firm. Davis responded that he had selected Trengrove’s name at random while “testing the proposition” that a more independent report might have met with a different response from the DA, which has rejected the Mchunu Attorneys report as illegitimate.

“I don’t think about race in these matters,” said Davis, who warned Arendse that he was “doing his client no favours”. After an adjournment, Arendse apologised and Davis reiterated his clarification.

While the DA’s next legal foray may begin tomorrow, Davis has reserved judgment on this matter for the time being. DM