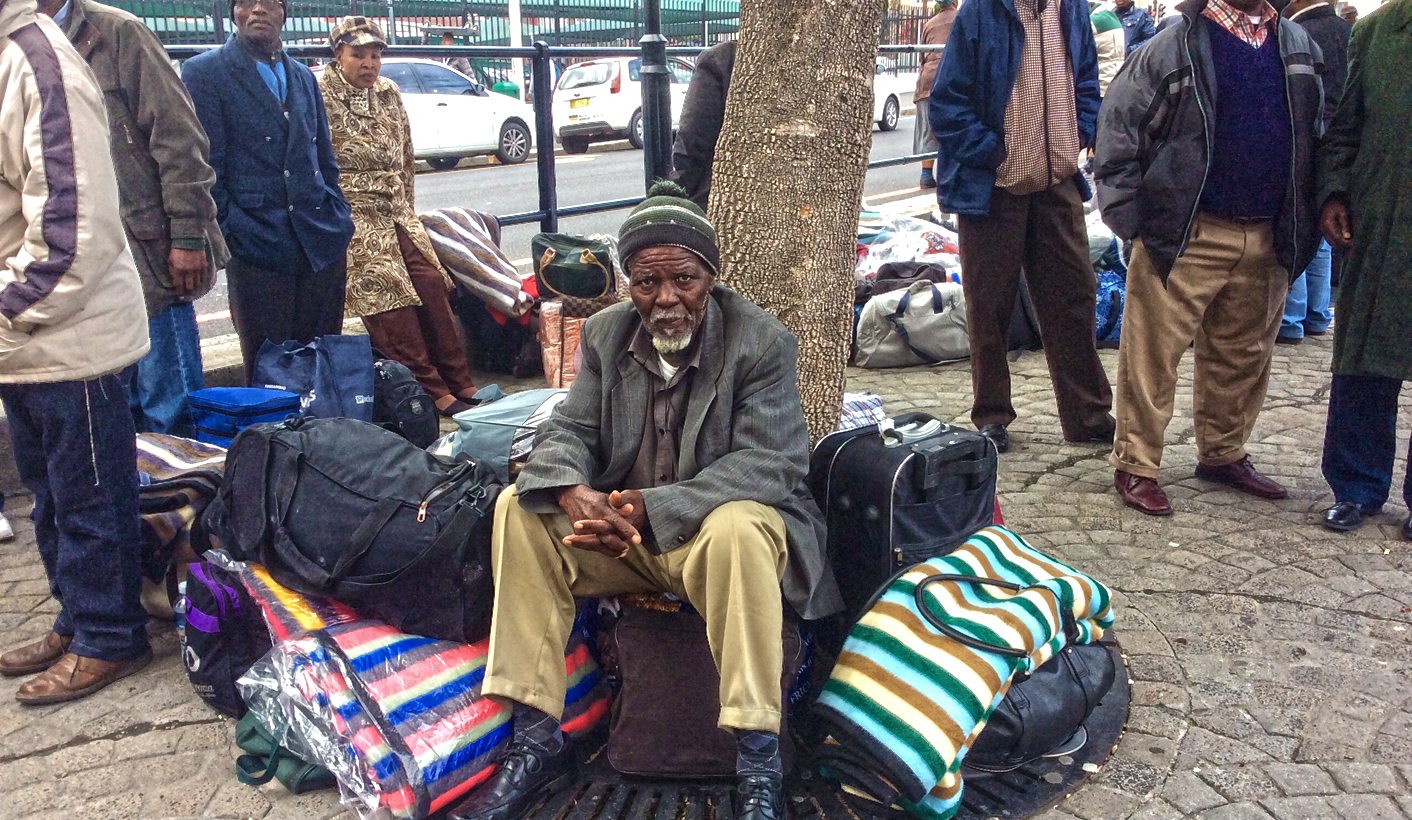 Two hundred Eastern Cape pensioners, some of whom are in their 90s, are sleeping on the pavement outside Parliament, waiting for someone from government to take note of their plight. Former employees of Transnet’s previous incarnation in the Ciskei, they claim they have been robbed of their pensions. They’ve made the trip before, and they’ll probably come again. There’s little hope they will ever receive the financial redress they believe they’re due – but they maintain they’re not leaving until someone listens to them. By REBECCA DAVIS.

“The apartheid government killed our people, but the ANC government chooses to bury us alive.”

Bacela, a white-bearded man from Newlands, outside East London, is standing outside Parliament with around 200 of his contemporaries. They made the journey across provinces by bus on Wednesday, arriving shortly after 3pm. Their belongings are stored in tattered backpacks, suitcases or plastic bags, arranged around their feet.

It’s been a chilly week in Cape Town, with the mercury struggling to make it out of the teens on some days. After a night spent sleeping on the pavement, the pensioners sit wrapped in blankets brought to them by the South African Social Security Agency. Several rely on crutches or canes to walk. There are rumours that one man has already been admitted to hospital.

Wilson Ndabendlala, from King William’s Town, stares straight ahead with his hands clasped. He was born in 1934. “They won’t give me my pension,” he says.

This is the issue that has compelled them to make the journey from the Eastern Cape. The pensioners are former employees – or relatives of employees – of two bodies which were precursors to the creation of railway parastatal Transnet in 1990: the Ciskei Transport Corporation and the South African Transport Services.

When you hear their story, it seems like a straightforward case of injustice. But as happens so often in South Africa, it’s not as simple as it looks.

“We come here to ask for the pension funds for our husbands, our brothers and our sisters who were working for Ciskei Transport Corporation,” begins Betty Matase, 67. “We know our husbands contributed to a pension fund, according to what our late husbands informed us. But it was taken. We don’t know who took it.”

Matase’s husband died in July 2011. He was employed by the Ciskei Transport Corporation as the superintendent-general of corporate services, Matase says.

Did they ever receive any pension payout at all?

“Good Lord,” sniffs Matase, who has the air of a woman who is not to be trifled with. “We didn’t see even a brass cent.”

The pensioners believe the pensions they are entitled to have been invested in companies like Old Mutual and Sanlam. This is where their stories begin to get more vague and confusing. They want the government to admit “that they have the money”, says Bacela. “Our message to government is that they must pay the money that people have suffered for. More than 400 people have already died.”

Rain starts to fall. Bacela looks up at the sky. “We will endure each and every torture we might be getting,” he says. Nearby, an old woman with few teeth shouts a provocation: “Come, rain!”

This is not their first trip to Parliament. One parliamentary journalist estimated that it is their fifth visit, in fact. This time, they hope to submit a memorandum to Speaker of the House Baleka Mbete. Why Mbete? “She is the leader of Parliament,” says Bacela, as if it’s a no-brainer.

The man who seems to be calling the shots for the group is Michael Matshaya. He produces a business card which identifies his company as “attorneys at law”, but when I ask if he is a lawyer, he demurs. “I am investigating the matter,” he says. Matase has told me earlier that Matshaya is a “private investigator”.

Matshaya says part of the group he represents is owed unpaid pension fund contributions and unemployment insurance fund (UIF) payouts from the old Ciskei Transport Corporation. For the other group members, things get more complicated. Matshaya claims a number of them were unlawfully dismissed by the South African Transport Services after participating in strike action in 1988. They are claiming recompense for this, as well as pension fund and UIF contributions.

Matshaya says that the pensioners are owed R6-million each. “It’s a lot of money,” he shrugs. “But it’s not my fault.”

Its contents are not encouraging. It states that the Department of Labour checked the identity document numbers of all the petitioners provided by Matshaya and either found no employment history details on record or details which were unrelated to either the Ciskei Transport Corporation or Transnet.

The Department of Labour stated further that the petitioners’ claims were “difficult to process because they were meant to claim UIF benefits six months from the date of the termination of their employment”.

A similar situation emerged with those who listed themselves as former employees of the South African Transport Services. The pension administrators of what would later become Transnet is Metropolitan, and Metropolitan “determine[d] that the names and identity numbers were not on their database”.

The report notes that the public protector’s office also looked into the matter in 2013 and corroborated the information given by Transnet. The public protector confirmed that “Transnet does not owe any of its former employees any monies”.

This outcome appears not to have deterred Matshaya or his petitioners, who seem resolute in placing the blame on the current government.

“We have no confidence in the government of the ANC,” Matshaya says. Is there a political party they would prefer to see in office?

“Yesterday we met with EFF, (Economic Freedom Fighters),” he responds. “They came and assisted us. The speaker of Parliament does not come to us. I don’t know why.”

Matshaya said the group would not be leaving without their money, no matter what the weather threw at them.

In some ways it’s a heartbreakingly typical South African story. These pensioners are people who lived through the criminal injustice of apartheid, only to find that the reality of life 20 years after democracy has fallen desperately short of their expectations.

“Nobody cared for us during apartheid, and nobody cares for us now,” says Betty Matase. “Maybe it’s because of our skin colour.” DM