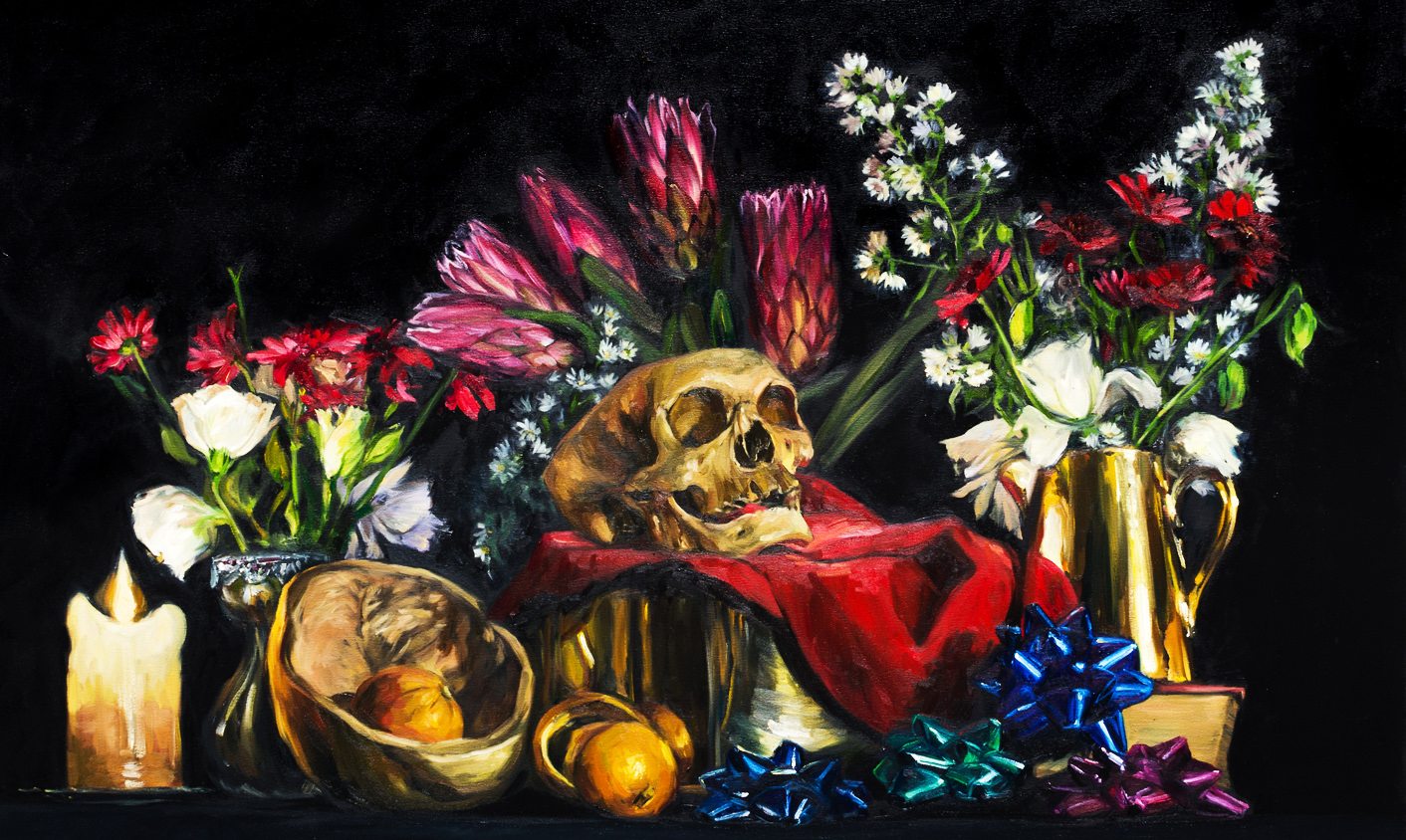 At a small gallery in Cape Town, 14 artists have presented their responses to the one thing we all have in common: death. It’s an often surprising meditation on what it means to be alive. By MARELISE VAN DER MERWE.

“We all know that our time in this world is limited, and that eventually all of us will end up underneath some sheet, never to wake up. And yet it is always a surprise when it happens to someone we know. It is like walking up the stairs to your bedroom in the dark, and thinking there is one more stair than there is. Your foot falls down, through the air, and there is a sickly moment of dark surprise as you try and readjust the way you thought of things.”
? Lemony Snicket, Horseradish

Death Speaks is one of those exhibitions one does not expect to go and see, and does not expect necessarily to enjoy. It’s in a smallish gallery, and it’s about dying; not a topic one brings up for fun. The last time I saw an exhibition that specifically explored the slow process of dying was in 2002, and it’s stayed with me all these years; testament to the power of both the artist and the subject matter. Death is one of those subjects one either does very well indeed or makes a royal and clichéd mess of. Fortunately, in this case, there are unexpected treasures.

The artists are all expressing, in different ways, their take on death, or their response to it, and yet there are so many different avenues explored that it never feels like an exhibition specifically about death – but rather one about being alive.

Christine Cronje, ‘Where I am Not’ series

A common theme that runs through the works by the 14 artists exhibiting is that of fragility and impermanence. Quanta Gauld mounts a single leaf in a box (coffin?); dried to the point where it is barely more than veins; it is so fragile it is a wonder it has survived transportation to the exhibition venue. Silence breathed into being, it is called, and in fact the box does also resemble a radio – the beginning of sound, speech, a living thing, but also transient and quite alone, calling into nothing. Gauld describes her work as “[aiming] to give form to human and ecological trauma that often feels distant, abstract and difficult to emotionally engage”.

Curator Alice Toich’s work is a highlight – a series of still life works on a blackboard background, partly in chalk and partly painted. Toich created these in response to the death of her grandmother, Agnes Toich, painting objects that belonged to her. “She was a sybarite, a lover of objects, a collecter of things, a hoarder,” says Toich.

One of a series by Alice Toich

“I realise how important her things have become to me, and how they in turn objectify the memory I have of her and her presence. How I remember my granny most, surrounded by elaborate things, in a string of pearls and matching patterned suit, drinking tea, is a far-removed picture of how she spent the last few years of her life. And people who met her in the last few years of her life could never had known the person she was if it were not for the stories my family shares. But what happens when her descendants can’t tell these stories anymore?”

One of a series by Alice Toich

Toich painted small areas on the paintings, and drew the rest in chalk, as a suggestion of the impermanence of life and of memory. “The actual areas that are truly painted on the paintings are very small in proportion to the canvases they exist on, just like the world we exist in, and people we exist for in this world, are a very small portion of it. The rest of the painting, drawn in chalk, will slowly be worn away over time, like a fading memory of someone lost,” says Toich.

The exhibition is also curated by Dale Washkansky, whose video installation Terminal Love (2015) is something entirely different, yet very necessary. A nod to Felix Gonzalez-Torres’s Untitled (Perfect Lovers) 1991, it is a comment on the prevailing representation of homosexual relationships by mainstream cinema; the doomed love that must somehow always end in death. Within these movies, made with a heterosexual audience in mind, Washkansky explains, there is a recurring trend of killing off the homosexual character. Homosexual life is represented as precarious, affiliated with death, pathos, mourning and grief. “I photographed the death scenes of homosexual characters so that the exposure lasted the duration of the whole scene, reducing the scene to the eternal absent versus present moment of the photographic image,” Washkansky says. “These images are then played back for the duration of the original scene, giving temporality back to the photographic image.”

Another still from Washkansky’s installation

One of the shortcomings of the exhibition is that it does not feature more work by rising star Sipho Mpongo, who was selected as one of the Magnum Foundation’s Human Rights Fellows this year. Mpongo’s work is angry, defiant, and a memorial to those who died needlessly and too young in Cape Town’s Langa township, where he grew up. “Love those who [are] no longer with us,” Mpongo writes in his artist statement. “The young people that died in my face while growing in Langa township still exist in my head, not the physical connection I had with them … I wish I could take the pain away. No one said I was going to be happy or sad when I was born. My body is expiring. I connect with the spiritual life and spirits do not die … Black-head, you ain’t gonna fly.” The last is a reference to his exhibited work, a striking close-up portrait entitled Black head. A simple portrait on a stark white background, it is a haunting work that calls one back again and again.

Also not to be missed is the beautifully executed exhibit of Nina Liebenberg, whose work maps the positioning of earth versus stars at significant moments – the death of JM Barrie; the last known communication with Amelia Earhart. A third piece draws inspiration from the pollination of the Drakaea orchid, which mimics the colouring of the Thynnid wasp in order to drive what she calls “a love affair between insect and flower”.

A close-up of Suzanne Duncan’s exhibition

The third curator, Suzanne Duncan, explores the body in grim detail – a particularly striking and simultaneously spine-crawling piece is her reproduction of the bones of her right hand made entirely of fingernails – fortunately for the squeamish, her exhibition also includes a series of beautiful close-up photographs that explore the ambiguity and frailty of the human body. Maurice Mbikayi, in a similar vein, takes up a theme of depersonalisation in an exhibition that creates sculptures out of used computer parts – expressing a different kind of death; dehumanisation through too-fast progress.

The exhibition, overall, is inspired by the vanitas painting tradition, and the subtitle ‘What I am now, you will be’ is an English translation of a Latin phrase found in the vanitas paintings, which was also frequently inscribed on tombstones to remind onlookers of their impending end (cheery, yes).

The exhibition is varied, subtle, and in many ways a celebration of living. DM

On Saturday 17 October, the curators and artists will be giving a free lecture and walkabout at the gallery from 11am until 1pm. Light refreshments will be served.

* Death Speaks: What I am now, you will be is on at 6 Spin Street, Church Square, until 31 October. Entrance is free.