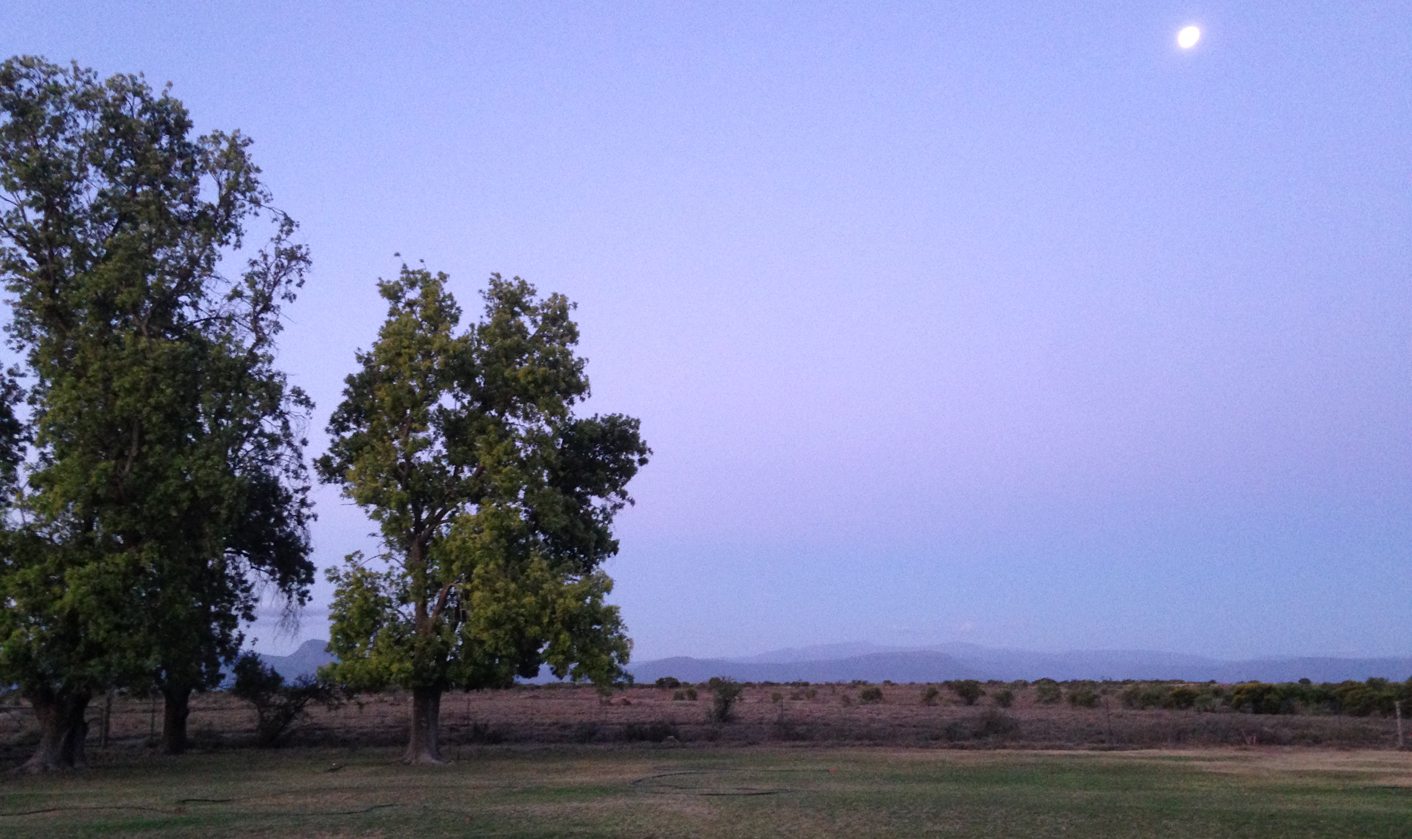 I love the Eastern Cape – I grew up there and have so many fond memories of its beautiful beaches, winding rivers and rolling uplands clothed in impenetrable thicket vegetation. The hills and rivers and beaches are still there, but sadly only patches of thicket remain, a great deal of it lost to changing land use, mostly farming. By PETER BORCHERT for UNTOLD AFRICA.

Serious harm to natural systems is a common thread throughout Africa and a world in which the oceans, sky, forests and grasslands are being compromised well beyond their ability to regulate our climate.

Where have all the flowers gone?

I was thinking on these things during a recent drive up to the Addo Elephant National Park, which lies an hour or so to the east of Port Elizabeth. The land through which the R335 winds its way to the main gate is now depressingly devoid of thicket plants – euphorbias, plumbago shrubs with their sky-blue flowers and the characteristic spekboom, a succulent proven to have remarkable carbon sequestration properties. Here and there citrus fields hint at some agricultural affluence, but in the towns the roads have more potholes than tarmac and people hang about dilapidated doorways in clumps of jobless dejection.

Scenes like these repeat themselves in so many parts of rural Africa. Large pockets of well-conserved land surrounded by abject poverty. The contrasting biological richness and personal wealth across the divide between parks and neighbouring communities is marked. And although the tourism industry that thrives around the continent’s great conservation areas does provide critically needed employment, it is not nearly enough to offset the general lack of opportunity.

These are significant social challenges, but what have they to do with climate change? Well, everything, actually, for it is the millions upon millions of rural poor who bear the brunt of climate vagaries. Already at survival’s edge they are vulnerable to even the smallest added hardship let alone the devastation of prolonged drought, flooding, scorching heat and sometimes (even in Africa) bitter cold. Such extreme events, which enmesh so many parts of Africa in the nexus of need between energy, food security and access to clean water, are ever more common.

Gloomy thoughts, but perhaps not. One of the other notable changes to the Eastern Cape landscape are tall, gleaming white columns, lots of them, at the top of which turn equally gleaming giant blades. Wind farms have come to the Eastern Cape. I know that wind energy has its critics, particularly regarding birdlife and bats, but innovation and experience are lessening that danger to some extent. I think they are beautiful beacons of hope, a promise that the energy we all need does not have to come from coal-fired plants belching greenhouse carbon into our already challenged atmosphere. Nor does it have to come from potentially deadly nuclear plants.

Africa, as it happens, is particularly blessed with renewable energy. For example the great Africa rift that runs up the eastern part of the continent through to the Red Sea has hardly tapped geothermal potential. Hydroelectricity barely features, but a great network of decentralised power could come from micro plants along Africa’s great rivers. There are the winds that blow consistently around Africa’s 26,000-kilometre coastline, and ocean currents that push vast columns of water against its shore. But the single greatest and most abundant source of energy, which alone could meet all the needs of Africa, is the sun. There is hardly a village that with a modicum of appropriate technology would not have enough sunlight to power its path to greater prosperity.

The gainsayers when it comes to renewables (and why are we not surprised) come almost exclusively from the massively powerful fossil fuel lobby. Their cry is the cost of renewables and their inability to reliably meet global demands. Both are poor arguments as experience around the world is showing. Here in South Africa where ineptitude and poor planning have seen an electricity crisis of considerable note, our nascent renewable energy sector has already saved the country many millions. A study by the Council for Scientific and Industrial Research shows that from January to June, wind and solar power generation saved $310-million in diesel and coal-fuel costs.

Gaining the edge over coal

On a global scale studies are showing that, dollar for dollar, the costs of new renewable plants are decreasing while those for coal and gas infrastructure are rocketing. Renewables by every measure are showing the way, and there is no lack of investment enthusiasm for the roll-out that is vital in the race to limit the worst consequences of global warming.

According to the WWF: “It’s nearly impossible to overstate the threat of climate change. Greenhouse gas emissions are rising more rapidly than predicted and the world is warming more quickly in response. Despite compelling scientific evidence, governments and businesses have responded with painful slowness. Even if countries fulfil all current mitigation pledges, the world will still face between 2.6°C and 4°C of warming.”

The science is so overwhelming that it is extraordinary that there are still those who challenge the human contribution, either dismissing it outright or suggesting that it is vastly overstated. Somehow these disproportionally powerful voices manage to suggest that taking action to halt or even reverse the worst effects of “supposed” human-induced global warming would be morally reprehensible – that it would place a huge inconvenience on developed world lifestyles and an unwarranted burden on the global economy.

The power of science …

There are few who demolish such thinking with such simple and devastating logic as George Monbiot who, in his masterpiece Heat: How to Stop the Planet Burning, challenges naysayers to ask themselves the following four questions: “Does the atmosphere contain carbon dioxide? Does atmospheric carbon dioxide raise the average global temperature? Will this influence be enhanced by the addition of more carbon dioxide? Have human activities led to a net emission of carbon dioxide? If you are able to say ‘no’ to any one of them, you should put yourself forward for a Nobel Prize. You will have just turned science on its head.”

The great strength of science is that it is an open system of knowledge: the very core of scientific endeavour is to question as there is always some degree of uncertainty. But when the 3,000-odd scientists who make up the International Panel on Climate Change tell us that the state of the planet is not good, it is perhaps unwise to quibble while earth burns. The conclusions of this august body have been painstakingly distilled from thousands upon thousands of peer-reviewed academic papers. Is not such scientific “opinion” worth taking seriously?

… and the power of opinion

After all we allow far less certain opinions to inform almost every aspect of our lives. We send our children to schools because opinion holds that they are good. We weigh up risk and investment in homes, companies and new business ventures because we believe they will deliver returns, not because they are guaranteed. We are warned to change our eating habits based on medical opinion. Good grief we don’t even need solid scientific findings upon which to base the decision to go to war – how morally reprehensible is that?

So if we do take the urgent and drastic measures required to curb global warming, what would we have lost if, in 100 years or so, history shows that it was a non-event? Precisely nothing. What could possibly be the downside of kicking our fossil fuel habit and having healing oceans, regenerating forests, cleaner air and less burden on the lives of those least able to shrug it off?

And hopefully when my great-grandchildren take the R335 to Addo, the wind farms will still be there, tons upon tons of carbon will be held in great swathes of pristine thicket and humans and nature will be prospering on both sides of the divide. DM

Peter Borchert has a career in publishing and conservation spanning more than four decades. His most recent project has been the development of Untold Africa, a meeting place for intelligent, engrossing and entertaining dialogue for a global community of like-minded people – people who share a common passion for the wild places of Africa, the creatures that inhabit them, and the breadth of African culture.