ICG: Burundi’s army is divided and losing its way 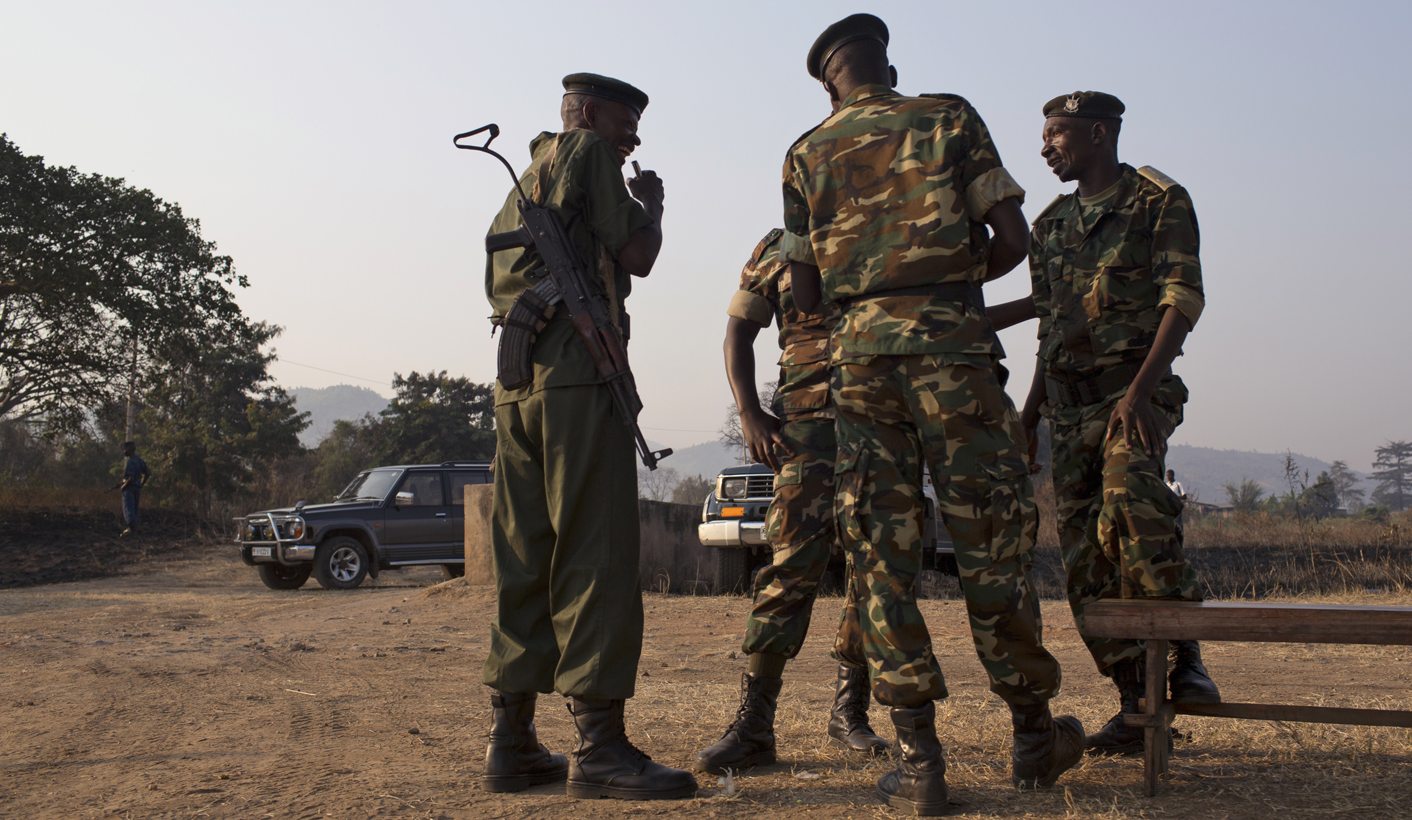 Not long ago, Burundi’s army was considered the greatest success of the 2000 Arusha peace accords, which brought a gradual end to a civil war that began in 1993. Today, the army is nearing its breaking point. Its silence since President Pierre Nkurunziza’s re-election in July contrasts starkly with the increase in violence in the country and with the army’s internal divisions. By THIERRY VIRCOULON for INTERNATIONAL CRISIS GROUP.

On the morning of 11 September, Burundian army chief-of-staff Prime Niyongabo escaped an assassination attempt in the south of the country. Three servicemen in his escort were killed. One month earlier, another high-ranking officer, head of the intelligence services General Adolphe Nshimirimana, was shot dead in broad daylight in the capital, Bujumbura.

Despite the silencing of independent media and the resulting information blackout, many Burundians believe other military officers are behind these attacks. Only military personnel would have access to the information and weapons required to ambush high-ranking officers. The arrests of military personnel that followed appeared to confirm this suspicion.

Not long ago, Burundi’s army was considered the greatest success of the 2000 Arusha peace accords, which brought a gradual end to a civil war that began in 1993. Today, the army is nearing its breaking point. Its silence since President Pierre Nkurunziza’s re-election in July contrasts starkly with the increase in violence in the country and with the army’s internal divisions.

Integrated but not united

A key point of the Arusha accords was the army’s composition. Burundi has a long tradition of military regimes: Successive presidents between 1966 and 1993 (Captain Michel Micombero, Colonel Jean-Baptiste Bagaza and Major Pierre Buyoya) all came to power through coups and the army was the primary centre of power. Its internal make-up was thus of great strategic significance for parties negotiating peace in Arusha. That is why Arusha stipulates that the army should no longer play a political role but instead unite former enemies: it should be composed equally of the country’s two main ethnic groups, meaning soldiers of the former regime, the former Armed Forces of Burundi (FAB), which are predominantly Tutsi, and militiamen of the majority Hutu armed groups that had been fighting against the Tutsi-led regimes.

The successful integration of former rebels into the armed forces was partly an achievement of the international community, which supervised the process, and the commitments of South Africa and other guarantors of the Arusha agreement, such as the United Nations (UN), the African Union (AU), Belgium, France, and others. Precisely because former opposition fighters of the Council for the Defense of Democracy-Forces for the Defense of Democracy (CNDD-FDD) and the National Forces of Liberation (FNL) could be integrated peacefully, the army became a symbol of the Arusha compromise. The local population as well as the international community began to perceive it as an apolitical force for stability. As a result, the army won support from various international partners, including the US, France and the Netherlands, and took on an active role in AU and UN peacekeeping missions.

However, during CNDD-FDD member Nkurunziza’s second term between 2010 and 2015, the army’s supposed unity and apolitical nature was perhaps already overestimated. In fact, while its participation in the AU’s 2007 operation in Somalia appeared to reinforce cohesion, differences and political affiliations dating from the civil war persisted. For example, the CNDD-FDD-dominated government continued to favour the former CNDD-FDD fighters for training opportunities abroad or deployment in peacekeeping missions. Officers had their own terms to differentiate members of the old guard from those of the armed groups: the first being the ex-FAB (mostly Tutsi) and the second the mostly Hutu Parties and Armed Political Movements (PMPA), comprising members of former rebel factions like the CNDD-FDD. Systems of dual command based on partisan affiliations were also not unheard of. The army was perhaps an integrated institution, but it was not a united one.

From an electoral crisis to an army in crisis

When the electoral crisis started in April and people took to the streets to protest against Nkurunziza’s candidacy every day, unease grew within the army. Officers intervened between police and demonstrators several times in April and May. These attempts to lower tensions, while seemingly positive, resulted in at least two lethal ‘incidents’ between police and soldiers, killing two soldiers and heightening tensions between the two security institutions. The army itself has diverging views on how to respond to street protests: for some, the army’s apolitical stance precludes it from getting involved in what it perceives as a ‘political struggle’; for others, the army should prevent these protests from challenging the government in power.

The failed 13 May coup attempt, organised by General Godefroid Niyombaré from the CNDD-FDD while the president was attending an East Africa Community summit in Tanzania, changed the situation.

Unease turned into fear. Because it exposed a disloyal faction within the army’s high command, the coup attempt has been followed to a quiet repression. Officers of the Para commando camp and the logistic Brigade, commonly called Base, have been kidnapped by agents of the police and the national intelligence service under suspicion of planning another coup. Some have come back, others have not. Some officers have even deserted – the latest being Lieutenant-Colonel Edouard Nshimirimana and Major Emmanuel Ndayikeza, deputy commander of the Muha camp.

Shortly after the failed coup, then defence minister, ex-FAB Major-General Pontien Gaciyubwenge, took refuge in Belgium, effectively ending the unofficial arrangement that the defence minister and chief-of-staff each represent a faction of the army (ex-FAB and PMPA). The new Defence Minister Emmanuel Ntahomvukiye called for unity within the army as soon as he took office, but is not from the ex-FAB military old guard. In addition to this shift in the political balance within the military hierarchy, officers serving in peacekeeping operations are experiencing wage arrears.

Hunting down the plotters?

As attacks against military posts by unidentified armed people have continued since July, with one attack targeting the presidential palace at the end of September, the government has implemented anti-coup measures targeting the ex-FAB. It removed some Tutsi officers from their command posts and appointed them to remote units. Officers of the former FNL rebellion were not spared. According to some sources, several Tutsi soldiers in the special Brigade of protection of institutions were replaced by colleagues from the CNDD-FDD.

According to a credible source: “Burundian peacekeepers returning from the [UN] peacekeeping mission in the Central African Republic left all their weapons to their replacements. Once in Bujumbura, ex-FAB soldiers were given a rifle with a single full magazine. But PMPA members were given a rifle with two or three full magazines, which shocked the ex-FAB.” Military officers have not escaped increasingly frequent, but selective, police searches, the source said, adding: “When policemen arrive at an officer’s house, they ask if he is a PMPA or an ex-FAB. If he is a PMPA, they do not enter or they enter and pretend to search. But if he is an ex-FAB, they search everywhere, even under the mattress or in the ceiling.”

As Nkurunziza’s third mandate begins, every new desertion and every new murder is exacerbating the rift between the regime and the army. The regime is suspicious of the army and the army is suspicious of the regime. In the Burundian political and security equation, the army today is an increasingly unknown quantity. Its growing dissatisfaction means more desertions, more violence and undoubtedly more coup attempts. DM

Photo: Burundian soldiers stand outside of a polling station during the Presidential election in Musaga neighborhood of the capital Bujumbura, Burundi, 21 July 2015. EPA/WILL SWANSON/