Back to the future: Afrikaners unveil R3.5-billion plan to secure future autonomy 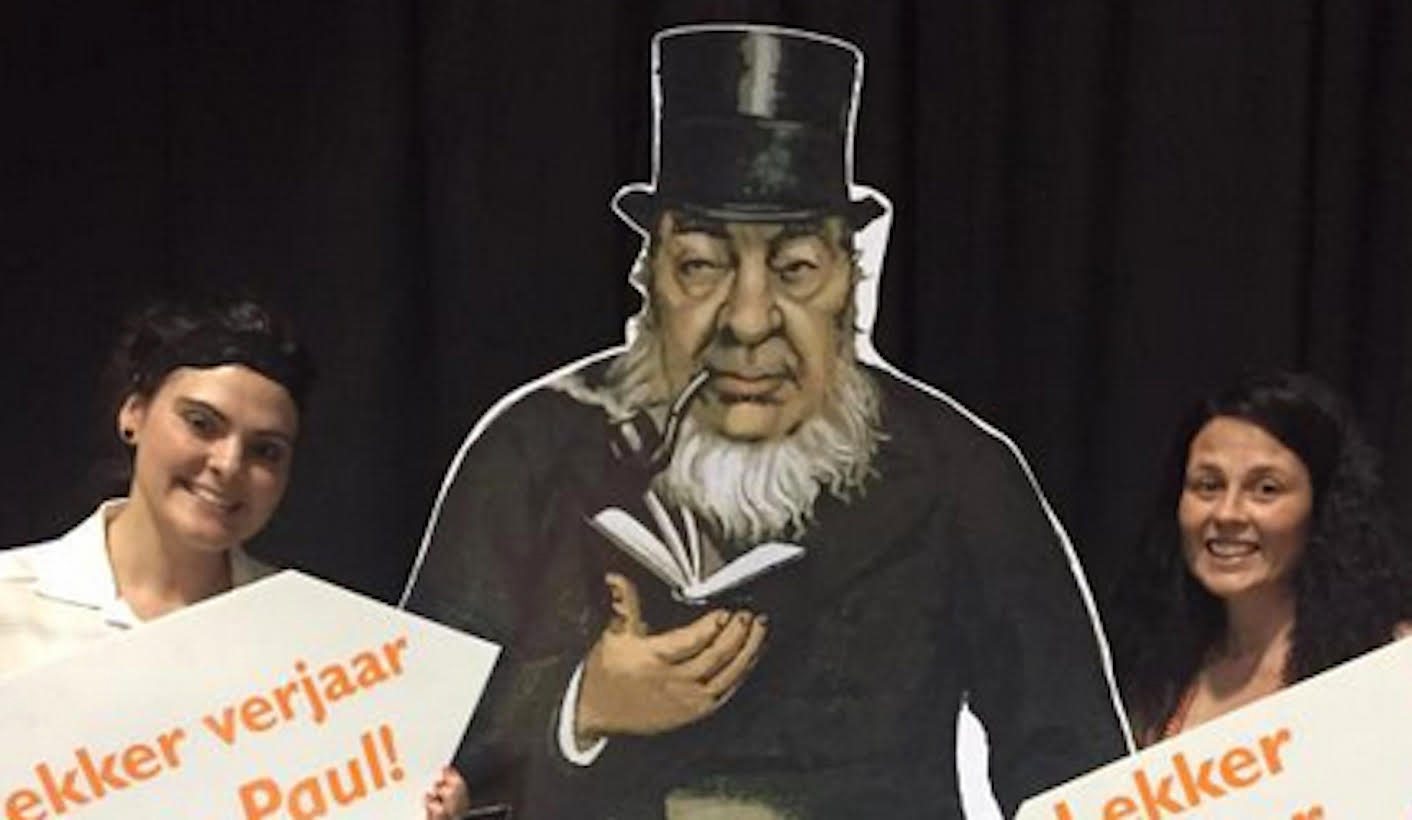 Between taking selfies with a cardboard cut-out of Boer hero and president of the Transvaal Republic Paul Kruger, listening to bible readings, singing along to Sarie Marais and eating champion koeksisters, the 2,770 delegates who attended the Solidarity Movement's Toekomsberaad – Helpmekaar 2020 summit in Centurion at the weekend approved a five-year plan, which includes the establishment of a private Afrikaans university to ensure the survival of the Afrikaner in democratic South Africa. The summit was a strange blend of ethnic mobilisation and past rhetoric folded into a future vision for Afrikaners as an autonomous rather than independent cultural grouping. By MARIANNE THAMM.

Welcoming delegates and guests to the conference at the Heartfelt Arena opposite the Voortrekker Monument in Pretoria on Saturday, Solidarity chief executive Dirk Hermann reminded those gathered that there was another summit happening in South Africa at the weekend, the African National Congress’s (ANC’s) national general council 40km down the road in Midrand.

“I can now announce our final registration numbers. But first I must mention that that today there is also a big summit in South Africa, it is, of course, the ANC’s policy conference. The ANC policy conference’s registration figure was 2,315. Which brings us to the question where do we stand? 2,770,” Hermann declared to thunderous applause.

Hermann encouraged those present, including the Democratic Alliance’s Anchen Dreyer and Freedom Front Plus Leader Pieter Mulder, to use 21st century technology to get the summit’s handvatsel (hashtag) Toekoms2020 trending on Twitter (it didn’t) as well as post photographs on “bakkiesblaie” (Facebook).

The aim of the Toekomsberaad – Helpmekaar 2020 (Future Summit – Let’s Help Each Other 2020), held on Paul Kruger’s birthday on 10 October, was to present the outcome of several motions adopted at a “crisis summit” themed “we’re here to stay” that was held in May this year. The May meeting aimed “to find solutions to protect the Afrikaner community against the country’s continuing decline”. (As if the rest of the country too is not affected by blackouts, potholes and crime but we digress).

The last time Afrikaners decided to Helpmekaar they ended up running the country and building a considerable economic legacy – which led to the establishment of Volkskas, Sanlam and Remgro among others – as Danie Brink, managing director of Helpende Hand – Solidarity’s charity wing, explained at the summit. The notion of Afrikaners doing it for themselves is deep rooted and “we can do it again”.

But this time, of course, sans political clout.

Solidarity’s chairman, Flip Buys, told those gathered that current circumstances in South Africa left Afrikaners with three choices, “accept how we are governed and hope for a political miracle, leave for greener pastures or organise in strong self-help organisations and create a sustainable future”.

Afrikaner independence was not practically achievable, he said, and “therefore we want to propose a middle way, and that is Afrikaner autonomy which is not a short cut but the only way forward”. The Helpmekaar 2020 plan, he added, was a “work list rather than a wish list”.

The history of Helpende Hand lies in the economic aftermath of the 1914 Afrikaner Rebellion protesting the enlistment of South African citizens in the invasion of then German South West Africa (now Namibia) supporting England in the war against Germany. The rebellion failed and the insurrectionists were made to carry the cost. Many faced complete financial ruin. In response Afrikaners mobilised to help them pay off their debt, sparking the rise of Afrikaner nationalism and political and economic dominance. The fund was launched on 6 March 1915 when 500 people gathered in Bethlehem to collect funds.

Introducing it on Saturday, Buys said the plan was not aimed at “taking us back to the past but building a better future”. “It is not an attempt to isolate ourselves and set up parallel government structures, to polarise the races, form a laager or an apartheid volkstaat. We work with the reality of the country, but we do not rest ourselves on it, we expect more of ourselves.”

He added that while the organisation had 330,000 members – more than 1-million if one included family members – “we do not claim to speak on behalf of all Afrikaners”.

“We regard this plan as the third big Helpmekaar movement in Afrikaner history where people accept responsibility for their future,” he said.

Buys’s speech attempted to locate the Afrikaner within a greater African context. He said Afrikaners were Africans and South Africans but also wanted to be Afrikaners and feel at home in Africa while making a sustainable contribution to the country and all its people.

“I don’t mean we should retreat into a laager or set ourselves against our countrymen but we must create the circumstances so that we don’t have to move out or to move inwards by withdrawing but also build bridges to the greater Afrikaans language community and all the other people with whom we share this beautiful country.”

However, the special challenges that faced Afrikaners, he said, were race-based legislation, the “criminalisation of our history”, the vandalism of Afrikaner monuments, “attacks on Afrikaans universities and schools” and “the abuse of political power to close off constitutional space”.

What did emerge from the summit is that Afrikaners, or at least those who identify with Solidarity, are currently grappling with a future identity, what exactly to own about past history, how to transmit this to a younger generation and how to find a future as a “cultural linguistic group” in democratic South Africa.

“Apartheid is gone and Afrikaners are, in the world’s eyes, no longer the bad guys and we must not get stuck in that era. We cannot allow that we live with a guilt complex or as hostages of the past. If Afrikaners do not take care of themselves, no one else will do it,” said Buys.

It was Ilze Nieuwoudt, of Kraal Publishers, Solidarity’s publishing house, who told those gathered that “the future of our past is in our hands” as she encouraged writers to “pick up their pens” and write about Afrikaner history and its heroes.

The leitmotif was picked up later in a peculiar “face-to-face” television interview insert between Freek Robinson and an actor dressed up as Oom Paul. The actor, at the closing of the summit, read from the old Boer president’s last letter to his volk, written from Switzerland and urging them: “Seek in the past all the good and beauty there is to discover, then form your ideal and endeavour for the future to realise this ideal. It is true that much that has been built has been destroyed and abandoned. But with unity of will and unity of strength you can rebuild what currently lies in dust.”

While dust might be a gross overstatement with regard to democratic South Africa, Buys acknowledged on Saturday that the state had not declined beyond redemption and that there were many positive factors “that give one hope that we will not become a failed state”. However, the “red lights” were flashing.

He said that while many South Africans no longer relied on the state for medical care, security, education, television programming and even electricity, or lived in private security villages and worked in the private sector, they did this as individuals and “individual independence is costly and impractical”.

Solidarity, Buys said, did not intend to become a political movement as it could accomplish more outside Parliament forming networks with other “Christian democratic organisations”. By 2020 it was hoped that a national structure of an Afrikaner network would have been established that could make decisions and execute these as well as “negotiate with authorities on various issues”.

The devil, of course, is in the financial detail and Buys said one of the aims is also the “mobilisation of capital” getting “groot geld met kleingeld” (getting big money with small change) through member contributions and tithes as well as raising funds through the Solidarity Investment Company as well as its financial and property arms.

“This way we were able to invest R50-million in Sol-Tech most of which came from R10 contributions from trade unions. The same goes for Akademia (a private college of education), while we were privileged through donations from well wishers to grow faster than would have been possible.”

Buys added that it was “irresponsible to leave your future to a government – ask the Greeks and the Zimbabweans”.

“A successful country exists with an effective public sector, a growing private sector and active citizens.