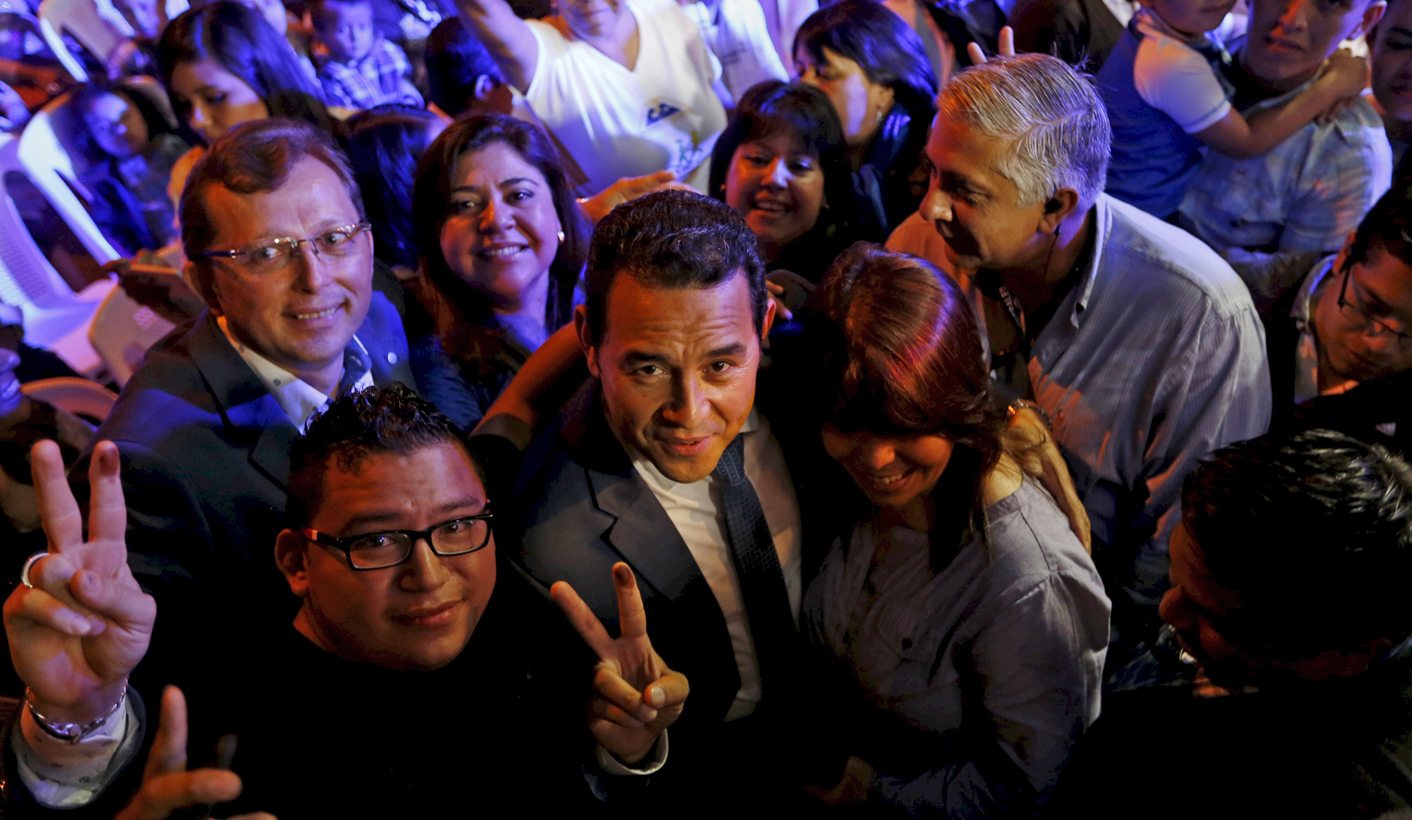 As Guatemalans prepare for the second round of presidential elections, with both the former president and vice-president in custody facing corruption charges, citizens are demanding greater transparency in both government and campaign spending. They know criminal investigations have weakened, but not eliminated, the nexus between politics and illicit business. By ARTURO MATUTE for the INTERNATIONAL CRISIS GROUP.

Amid unprecedented scenes of high political drama, Guatemalans voted for major change in the first round of presidential voting on 6 September. They handed first place – for now – to a comic actor. But whether this will deliver political renewal, or a clean sweep of corruption allegations that brought down the previous president and vice-president, remains unclear.

Extraordinary citizen mobilisation accompanied the poll, as did judicial investigations into alleged corruption. Just three days before the vote this resulted in the resignation, and subsequent detention, of the president of the country. Guatemalans cast their ballots in record numbers, giving Jimmy Morales – a comedian with little experience in politics – the largest percentage in the poll. He was followed by former first lady Sandra Torres. Her success narrowly squeezed the previous front-runner, businessman Manuel Baldizón, out of the 25 October second round.

On the streets, in café conversations and in television phone-ins, citizens are still demanding greater transparency in both government and campaign spending. They know that criminal investigations have weakened, but not eliminated, the nexus between politics and illicit business. For the extraordinary events of 2015 to usher in a deeper process of political reform, however, reformists need to transform their street mobilisation into organised civic engagement.

Prosecutors have carried out a sweeping anti-corruption campaign with the help of the International Commission Against Impunity in Guatemala (CICIG), a hybrid body created in 2006 with the help of the United Nations to investigate and dismantle illicit groups operating within state institutions. As Crisis Group detailed in April, the scandal broke when they exposed a racket dubbed La Línea that was allegedly defrauding the government of customs duties in return for kickbacks.

The case enveloped former vice-president Roxana Baldetti, who resigned in May, before claiming president Otto Pérez Molina himself, after Congress voted unanimously on 1 September to lift his presidential immunity. In a development that is unprecedented in Guatemalan history, both the president and vice-president are now in custody, facing corruption charges. The new president, Alejandro Maldonado, a veteran jurist appointed to succeed Baldetti, took power through the established legal procedures, as called for by Crisis Group, and presided over the elections.

Morales, the winner in the first round, benefitted from name recognition and his status as an outsider from the political class targeted by protestors. An evangelical protestant, he is a conservative who ran on the simple slogan of being “neither corrupt, nor a thief”. Critics worry about his inexperience, which he acknowledges, and his support from military veterans’ groups committed to preventing further trials about human rights abuses perpetrated during the country’s 36-year internal armed conflict.

Torres is known for implementing social programmes popular in rural areas during the government of her ex-husband Alvaro Colom (2008 – 2012). Opponents depict her as a radical, though she has tried to move toward the centre by naming a businessman with close ties to the country’s biggest consortiums as her running mate. She has the advantage of a solid national party structure, though electoral authorities and the CICIG accused her of unfair campaign practices and critics point to other grave allegations.

Whoever wins the 25 October run-off will face a divided Congress. Although Baldizón failed to make the second round, his Líder party has the most members of the national legislature, with 37 legislators. Torres’s National Unity of Hope (UNE) party won 28 seats in the assembly, which may allow it to build alliances with potentially like-minded groups, such as former president Alfonso Portillo’s Everyone and other smaller groupings.

This could help UNE push for a reform agenda, which Torres says is her objective. Countering critics, sceptical of UNE’s commitment to change, Torres has called on Congress to approve the reforms before the new legislature, although this may be a campaign tactic to muster support from the urban middle classes among whom her showing was weakest. The run-off could be close. Morales is expected to take much of the urban vote while Torres may be able to pick up votes from former Baldizón supporters in predominantly rural municipalities. The winner will take office on 14 January 2016.

Meanwhile, Maldonado has promised to take up protesters’ demands for political reform, urging the current Congress to approve amendments to the electoral law before the run-off. His caretaker government also faces a difficult fiscal situation, which will require it to carefully distribute funds among critical public institutions, especially hospitals, prisons and the police.

The president presented a list of three candidates for vice-president, from which Congress chose Juan Alfonso Fuentes Soria, a former rector of the national university and director of the Presidential Human Rights Commission under Portillo. It is not clear if Maldonado, Soria and his newly appointed cabinet have the political skills and clout in Congress to forward the reforms.

Citizens’ groups, business associations and activists have come together during the crisis and reached basic consensus on a minimal reform agenda that includes stricter regulations for political parties and campaign funding, an invigorated comptroller to oversee public transactions, more transparency in government procurement, the enhancement of a meritocratic civil service, buttressing the independence of judges and magistrates, and strengthening the public ministry’s capacities to investigate corruption.

Unfortunately, it’s unlikely that a majority of legislators will support the reforms now that the incentive to respond to citizens’ demands implied by their re-election campaigns is over. Nevertheless, it may prove unwise for them to disregard the new popular will. Guatemalan society has been maturing much faster than its political system, mobilising the people and intensifying demands for political change.

Much remains to be done to fulfill the promises made way back in 1996, when a peace accord offered not only to terminate the civil war, but to bring a better democracy to Guatemala, based on transparency, accountability and an enhanced rule of law. Peaceful protests and civic engagement combined with greater judicial scrutiny have already proven to be the best means available to compel politicians to better represent the public interest.

If even these mechanisms fail to push forward democratic reforms, society risks opting for more radical demands and means, prolonging the crisis and perhaps descending into violence. The extraordinary steps forward already taken during 2015 are an opportunity Guatemala should not miss. DM

Photo: Guatemalan presidential candidate for National Convergence Front Jimmy Morales (C) celebrates with his supporters outside his campaign headquarters in Guatemala City September 6, 2015. For years, Guatemalan comedian Morales earned a living cracking bawdy jokes on TV, riffing on eating condoms and the perils of being ravished by a bull. Now he looks set to become the troubled Central American country’s next president. Running on an anti-corruption ticket, Morales rode a wave of public anger over a multi-million dollar customs scandal that led to the arrest of President Otto Perez last month, and he won the first round of voting on Sept. 6. Picture taken on September 6, 2015. REUTERS/Jorge Dan Lopez