Ethiopia: Despite re-election, prime minister’s hold on power is still work in progress 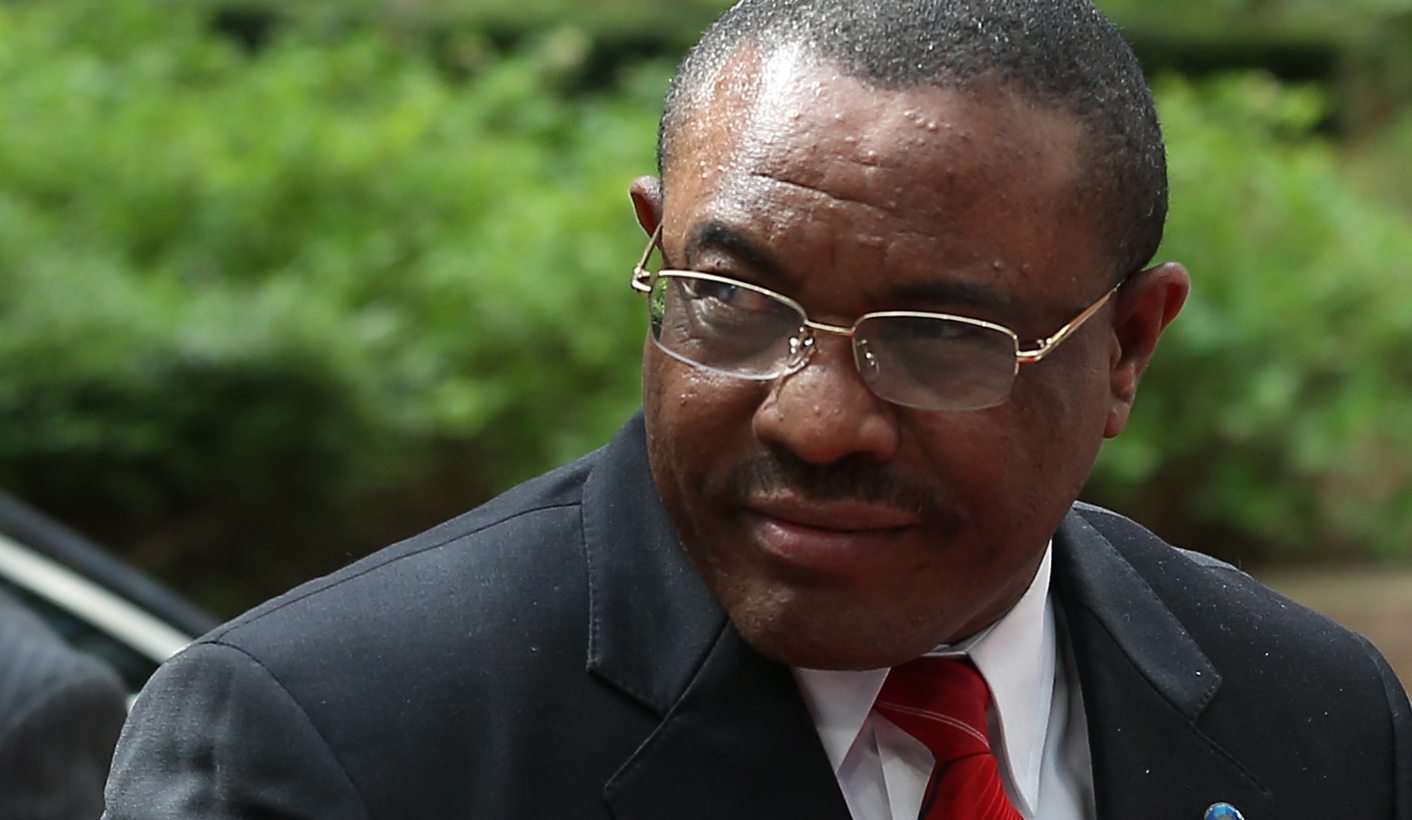 Ethiopian Prime Minister Hailemariam Desalegn is riding high after being unanimously re-elected by parliament. But this united front masks deeper fragilities that may yet unseat Hailemariam. Still, while the premier may not have any natural constituency of his own, he can at least rely on Meles Zenawi’s ghost for support. By SIMON ALLISON.

Like David Moyes taking over from Alex Ferguson, or Trevor Noah following Jon Stewart, the odds were stacked against Ethiopian Prime Minister Hailemariam Desalegn when he succeeded Meles Zenawi after his death in 2012.

In many ways, Hailemariam is the anti-Meles: a dour, plodding technocrat with no natural constituency, who replaced the visionary ideologue who micromanaged his party, and his people, into submission.

Despite this, analysts suggest that it’s working, and that Hailemariam deserves credit for managing what could have been a dangerous transition. “He has handled it very well. First of all, it was difficult to fit into the shoes of Meles, who had governed the country for 21 years. It would have been difficult for any Ethiopian to possess the knowledge, maturity, confidence, ferocious ambition and political power of Meles. Secondly, he had to get used to the pressures of the job. He did that because he is more open and simple and sought the advice of more experienced government officials,” said Berouk Mesfin, senior researcher at the Institute for Security Studies’ Addis Ababa office.

In person, Hailemariam cuts an unassuming figure. He has the air of a man who’s not quite sure he belongs in the top job, and doesn’t know how much longer he’ll keep it. Which makes his re-election on Monday all the more intriguing.

In a unanimous vote, parliament gave Hailemariam another term as prime minister. Provided all goes according to plan, he should have five more years in Addis Ababa’s grand Menelik Palace – once the seat of emperors, now home to the prime minister’s office and residence. It helps that Hailemariam’s party, the Ethiopian People’s Revolutionary Democratic Front (EPRDF), occupies almost every seat in parliament, and that his coalition partners took the rest.

As mandates go, it’s hard to beat: a 100% endorsement from a representative body dominated by a coalition that won 95% of the popular vote.

Except the numbers, impressive as they sound, don’t tell the full story. The united front masks deeper fragilities within both the party and the state that make Hailemariam’s position a lot more precarious than it looks.

The most obvious problem is the nature of the elections that gave the EPRDF such a commanding majority, which were criticised by rights groups. “Elections where a ruling party wins 100% of the seats in parliament should always ring alarm bells … The results shouldn’t be seen as a stamp of approval for Prime Minister Hailemariam Desalegn’s government – rather they are the inevitable outcome of a political system in which opposition parties face extraordinary challenges and nearly all avenues for citizens to engage in political debate are closed,” said Felix Horne, Horn of Africa researcher for Human Rights Watch.

In other words, Hailemariam’s popular mandate may not be nearly as popular as it appears. This is unlikely to trouble the prime minister or his party, however. A key feature of Meles’s political vision was that socio-economic rights should come before political rights, and the powers-that-be believe Ethiopia’s impressive economic growth is proof that the trade-off is working. But what happens if – more like when – this growth slows?

More serious for the short-term future of both Ethiopia and Hailemariam himself, however, are the divisions within the ruling coalition and state apparatus (in what is effectively a one-party state, it is nearly impossible to separate the two).

Unlike Meles, who demanded and received absolute loyalty from his lieutenants, Hailemariam’s authority is not absolute, and he must contend with the political ambitions of rivals in key positions. Names to watch out for include Samora Yunis, the extremely powerful chief-of-staff of the Ethiopian National Defence Forces; Debretsion Gebremichael, deputy chairman of the Tigray People’s Liberation Front (which continues to wield undue influence in the ruling coalition) and minister for communication and information technology; and Getachew Assefa, boss of the pervasive National Intelligence and Security Service.

For now, however, Hailemariam can still rely on the support on one man: Meles Zenawi. In Ethiopia today, the late prime minister is still a potent political force. His face is plastered on posters and billboards, his sayings are venerated, his legacy is invoked whenever possible. Death has bequeathed him the cult of personality that he avoided while alive. And Hailemariam, as Meles’s handpicked successor, continues to reap the benefits. DM

Photo: The Prime Minister of the Federal Democratic Republic of Ethiopa, Hailemariam Desalegn arrives at the fourth EU-Africa Summit of Heads of States at the European council headquarters in Brussels, Belgium, 02 April 2014. EPA/JULIEN WARNAND.