‘Destroying a hospital and so many lives, for nothing’: Inside MSF’s bombed facility 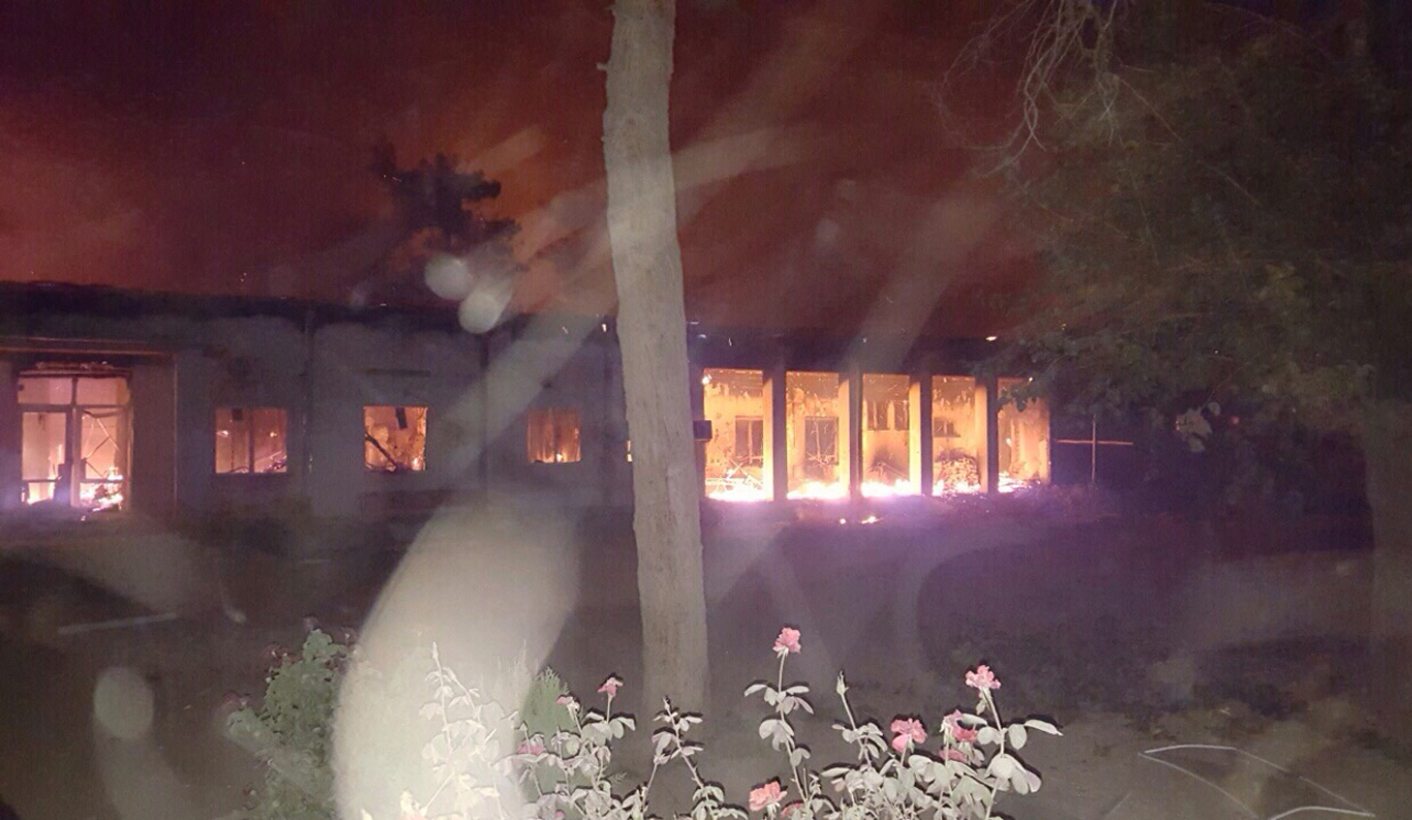 Doctors Without Borders has withdrawn from Kunduz in Afghanistan after a series of attacks on its trauma facility that took the lives of at least 23 people – 13 staff members and 10 patients, including three children – and injured dozens of others. This followed days of violence that have left the city devastated. By MARELISE VAN DER MERWE.

The International Day of Non-Violence on 2 October passed Kunduz by this year.

On Tuesday 29 September, Médecins Sans Frontières (MSF) issued a statement saying its trauma hospital in the Afghan city was “overwhelmed with wounded” after fighting between government and opposition forces engulfed it on 28 September .

Now MSF, its facility destroyed and having faced a rising death toll among patients and staff over the weekend, has withdrawn from Kunduz altogether.

The organisation has worked in Afghanistan since 1980.

Guilhem Molinie, MSF’s country representative in Afghanistan, said before the air strikes on the facility that the hospital had had to increase its beds as an emergency measure because the number of casualties in the city was becoming unmanageable.

“We have quickly increased the number of beds from 92 to 110 to cope with the unprecedented level of admissions, but people keep arriving,” Molinie said. “We have 130 patients spread throughout the wards, in the corridors and even in offices. With the hospital reaching its limit and fighting continuing, we are worried about being able to cope with any new influxes of wounded.”

MSF also told media that in the days leading up to the air strikes on the hospital, it had communicated the facility’s precise GPS coordinates to both the North Atlantic Treaty Organisation and US forces for safety reasons. “The bombing took place despite the fact that MSF had provided the GPS coordinates of the trauma hospital to Coalition and Afghan military and civilian officials as recently as 29 September, to avoid the hospital being hit.

“As is routine practice for MSF in conflict areas, MSF had communicated the exact location of the hospital to all parties to the conflict,” the statement read.

MSF added that the attacks continued for half an hour after staff sent urgent communications to American and Afghan military officials.

MSF is politically neutral, and does not make distinctions on the basis of ethnicity, religion or political affiliation.

On Saturday, Afghanistan’s interior minister, Sediq Sediqqi, said the hospital was hiding 10 to 15 “terrorists” at the time of the strike. “All of the terrorists were killed but we also lost doctors,” he said at a press conference.

“The international medical organisation Médecins Sans Frontières (MSF) condemns in the strongest possible terms the horrific aerial bombing of its hospital in Kunduz, Afghanistan,” spokesperson Kate Ribet said on Saturday evening. “MSF demands a full and transparent account from the coalition regarding its aerial bombing activities over Kunduz on Saturday morning. MSF also calls for an independent investigation of the attack to ensure maximum transparency and accountability.”

The United Nations condemned the attack after the US military issued a statement on Saturday describing the damage to the MSF facility – and its staff and patients – as “collateral damage”. By Sunday, US president Barack Obama had committed to an official investigation.

“The bombs hit and then we heard the plane circle round,” said Heman Nagarathnam, MSF head of programmes in northern Afghanistan. “There was a pause, and then more bombs hit. This happened again and again. When I made it out from the office, the main hospital building was engulfed in flames. Those people that could had moved quickly to the building’s two bunkers to seek safety. But patients who were unable to escape burned to death as they lay in their beds.”

According to Ribet, MSF staff desperately tried to save the lives of wounded colleagues and patients, setting up a makeshift operating theatre in an undamaged room. Some of the most critically injured patients were transferred to a hospital in Puli Khumri, a two-hour drive away.

By 4 October, the organisation had announced its withdrawal from Kunduz. “All critical patients have been referred to other health facilities and no MSF staff are working in our hospital,” MSF’s Kate Stegeman said.

“Some of our medical staff have gone to work in two hospitals where some of the wounded have been taken.”

A Kunduz resident known only as Aminullah told Al Jazeera that doctors were moving to Kabul or Mazar-e-Sharif, afraid for their lives.

“We [his three children and wife] haven’t eaten for the past three days. We don’t even have a water supply. My children are falling sick and I don’t know where to take them,” he said.

“Forget about getting medical treatment, no one is able to even provide coffins for the dead bodies in the city.”

The consequences of this loss for the northern city will likely be severe. MSF’s hospital is the only facility of its kind in the north-eastern region of Afghanistan, and it provides medical care free of charge. MSF’s policy of non-discrimination and neutrality is an added benefit.

The air raid struck MSF’s facility nearly a week after the Taliban invaded Kunduz, the first provincial capital to be seized by the group since they lost power in 2001. In the days that followed, heavy fighting ensued between the Taliban and government forces. Early on Sunday, the latter – with around 7,000 troops deployed – said they had gained ground, but by evening Al Jazeera reported that the Taliban had regained control of large parts of the city. Reporter Qais Azimy said it was difficult to ascertain accurately how many people had died in the fighting.

Nurse Lajos Zoltan Jecs, who worked at the MSF hospital, said via email that the trauma of the experience defied expression. “I have no words for this. It is unspeakable,” she wrote.

Jecs said she was sleeping in the “safe room” at the hospital when she was woken at around 2am by the sound of a large explosion. She was confused to hear the explosion so close by, and while she and other staff were still trying to figure out what was happening, there were more bombings.

After some 20 or 30 minutes, Jecs said, an emergency room nurse called her name and staggered in with massive trauma to his arm, covered in blood, with wounds all over his body. “At that point my brain just couldn’t understand what was happening. For a second I just stood still, shocked,” she said.

“He was calling for help. In the safe room, we have a limited supply of basic medical essentials, but there was no morphine to stop his pain. We did what we could.”

Once the bombing stopped, said Lecs, she and the project coordinator ventured outside to see what was happening, and they saw the hospital destroyed and burning. She was in shock, but went to look for survivors.

A few had made it to a safe room, she said.

“One by one, people started appearing, wounded, including some of our colleagues and caretakers of patients.

“We tried to take a look into one of the burning buildings. I cannot describe what was inside. There are no words for how terrible it was. In the Intensive Care Unit six patients were burning in their beds.

The office, says Lecs, was “full of patients, wounded, crying out, everywhere”.

The “mass casualty plan” included seeing which doctors were still alive and able-bodied enough to help. An urgent surgery was required for one doctor, but he died on the operating table.

“We did our best, but it wasn’t enough,” Lecs wrote.

“We saw our colleagues dying. Our pharmacist – I was just talking to him last night and planning the stocks, and then he died there in our office.”

Lecs said she was struggling to verbalise “what is in my heart since this morning”.

“What is the benefit of this? Destroying a hospital and so many lives, for nothing.

“I cannot find words for this.” DM