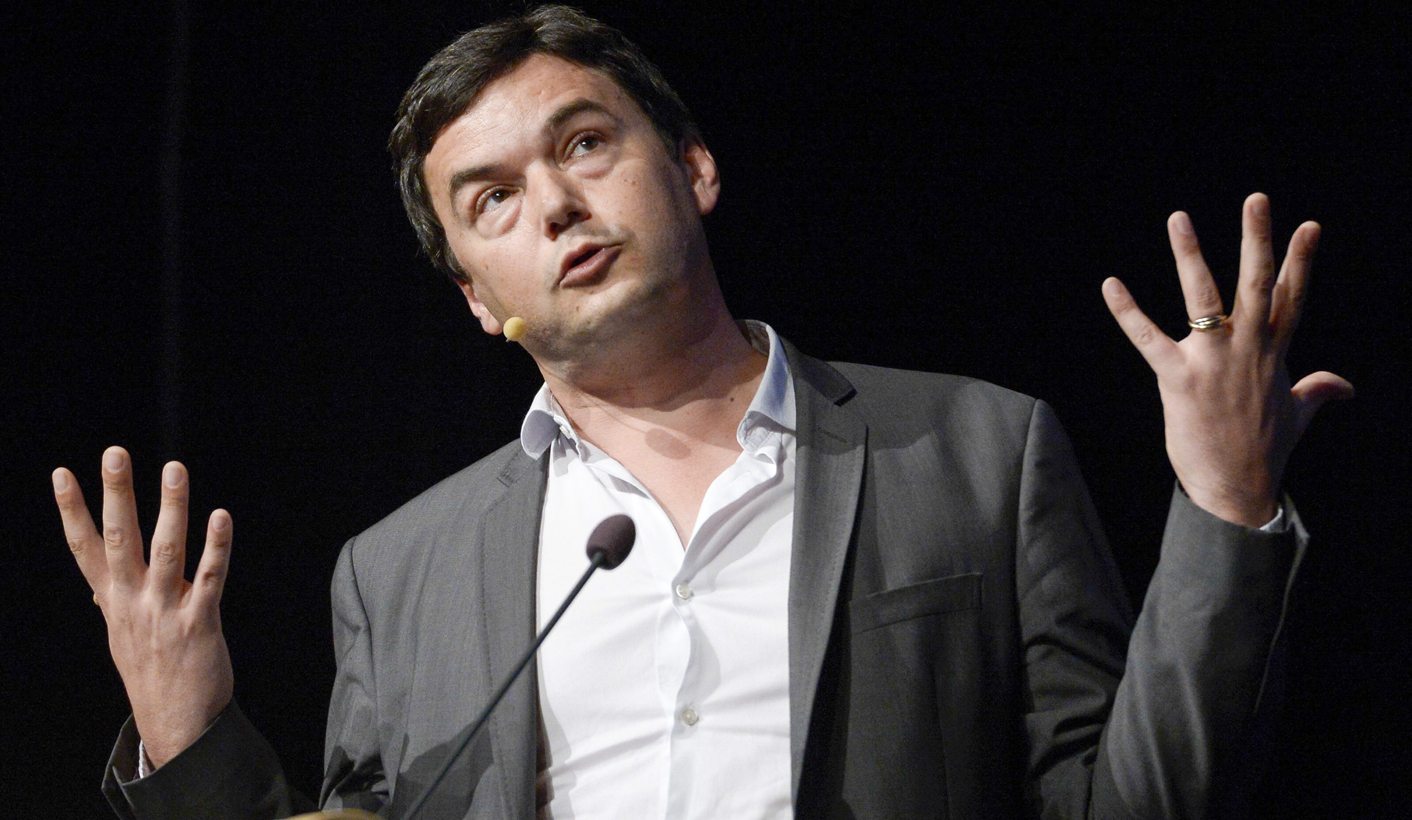 On Saturday in Soweto, in front of 2,000 people, rock star economist Thomas Piketty offered a bleak assessment of the new South Africa – a country that is, in some ways, more unequal than it was 25 years ago. And while he has solutions, don’t expect them to be implemented here any time soon. Especially not by the event’s sponsors. SIMON ALLISON reports on a Nelson Mandela Annual Lecture that was as notable for its glaring hypocrisies as its scholarship.

Thomas Piketty is puzzled. To a near-capacity crowd at the University of Johannesburg’s Soweto campus, made up of students and dignitaries and hand-selected members of the public, he confesses that South Africa presents him and his fellow economists with a conundrum.

“Of course now we are 25 years after the fall of apartheid … (but) inequality is not only still very high in South Africa, but has been rising and, in some ways, income inequality is even higher today than 20 years ago. This is something we want to better understand.”

Fortunately, Piketty has made it his life’s work to solve exactly these kinds of puzzles. His weighty tome, Capital in the 21st Century, addresses this problem on a global scale. An unexpected bestseller, Capital argues that capitalism as we practice it today is fundamentally flawed because wealth will always grow faster than economic output. In other words, the bank accounts of the wealthy will always grow faster than everyone else’s salaries. In even simpler terms: the rich get richer, and the poor get poorer. It’s the ideological foundation for the protests around the 1% and the 99%, and its well-timed thesis has made Piketty a celebrity, catapulting him – at the tender age of 44 – into the pantheon of liberal economists, alongside the likes of Joseph Stiglitz and Paul Krugman.

And now he’s here, in South Africa, invited to address the 13th Nelson Mandela Annual Lecture. He gets a standing ovation before he even starts, and another one when he finishes. In between, he outlines why he thinks South Africa is still so dramatically unequal – and suggests a few things we can do about it.

But first, a history lesson, and Piketty’s jarring conclusion that Europe’s success in reducing inequality has more to do with violence than market forces. “It is due, to a large extent to the very violent shocks of World War I, the Great Depression, World War II and, most importantly, to the new policies, the new social policies, welfare state policies, new fiscal policies, progressive taxation that were finally accepted by the elites after these violent shocks and also after the Bolshevik Revolution, which put strong pressures on the elite in Western countries to accept reforms, which until 1914 and World War I were refused,” he said.

Piketty looks specifically at his native France, which, he argues, was the first European country to introduce political equality, but among the last to introduce policies that reduced economic inequality. In fact, in the century after the French Revolution, the concentration of wealth amongst the elites actually increased, until World War I forced the elites to accept serious fiscal and social reforms.

While not exact, the parallels with modern South Africa are ominous. “In a way the inequality regime that existed under apartheid was much more oppressive and violent than the ancien regime in France. The group that had more rights than the rest of the population, namely the whites, was much bigger. It was not 1% of the population; it was 10%-15%, so it’s more difficult to deal with a situation like this than if it’s 1%. The difference of colour of skin is also important because when everybody is white in France, you can sort of forget a couple of generations later who comes from what group, which is more difficult with the colour of skin. It’s a trivial remark, but it makes a big difference in the long run, you know, in order to move ahead and solve this kind of situation,” said Piketty.

Just like post-revolutionary France, in post-apartheid South Africa this economic inequality has continued. “Everything we know suggests an unusually high level of inequality, higher than what we observed pretty much anywhere else in the world.” The key statistic here is that 60%-65% of South Africa’s wealth is concentrated in the hands of just 10% of the population (compared to 50%-55% in Brazil, and 40%-45% in the US).

“Of course, this group historically has been predominantly, almost exclusively, white. Even today if you look at the data, especially within the top 1%-5%, it will be up to 80% white, so things have changed a little bit, but we are still are very much with this same structure of racial inequality that we used to have. So now how can we make progress?”

While Piketty refrains from drawing the link explicitly, it’s hard not to wonder if South Africa – like France – needs its own violent shock to force the issue.

None of this is exactly ground-breaking for South Africans. Our country is deeply unequal? Whites still own most of the economy? Tell us something we don’t know.

This is where Piketty gets interesting. While acknowledging that international factors play an important role, he says there are a few main areas where South Africa is failing – and which could, if addressed, turn the country around. Most interestingly, he supports calls for a national minimum wage, argues for worker participation at board level in companies, and says South Africa desperately needs proper land reform.

“Let me just say that if we take a broad international historical perspective, we see in many countries, in history, much more ambitious land reforms than what we have seen in South Africa since the end of apartheid; I think it’s fair to say that black economic empowerment strategies, which were mostly based on voluntary market transactions … were not that successful in spreading the wealth and limiting the extreme concentration of wealth from which we start in South Africa. So I think we need to think again about more ambitious land reform,” he said.

This is music to the ears of the Economic Freedom Fighters, no doubt, but Piketty’s radical suggestions sat uncomfortably with the event’s corporate sponsorship, which included AngloGoldAshanti, Audi, Coca-Cola South Africa, Vodacom, Rupert & Rothschild Vignerons (a winery founded by the late billionaire Anton Rupert) and Douw Steyn, in his personal capacity (Steyn, another billionaire, is the mastermind of Steyn City, an ultra-luxurious gated community in Johannesburg that caters to the super-rich).

It’s unclear whether this was a public relations disaster, or a masterstroke. Did this who’s who of South African monopoly capital know they were funding the man who has called for vastly increased income taxes and annual wealth taxes? Did they understand that, in Piketty’s narrative, they are the bad guys?

Or was it more insidious: did the sponsors realise that in plastering their branding all over Piketty’s message, they were simultaneously undermining him? Their logos told the audience that even capitalism’s most respected discontents have been assimilated into, and benefit from, the very companies and multinationals they rail against. That, whether he likes it or not, Piketty is part of the system – and the system isn’t going to change any time soon.

Perhaps former finance minister Trevor Manuel, in a post-speech interview with the Daily Maverick, put his finger on the problem: that while we all know Piketty is right, no one – not the government, not big business, not the economic elites – is in a hurry to implement his ideas.

“We’ve got the framework in place, but I think the problems are not in the economics, it’s not even in the tax law. Our problems are in the leadership and how we convene society to understand that we’re in this together,” said Manuel.

In Soweto, Piketty’s ideas earned him two standing ovations. As good as these ideas are, will this be the extent of their impact on South Africa? DM

Photo: French economist Thomas Piketty gestures as he makes a point during his seminar at the Almedalen political week in Visby on the island of Gotland, Sweden, 30 June 2014. EPA/JANERIK HENRIKSSON.