RWC 2015: England Austracised, South Africa ‘not out of the woodwork’ and other weekend talking points 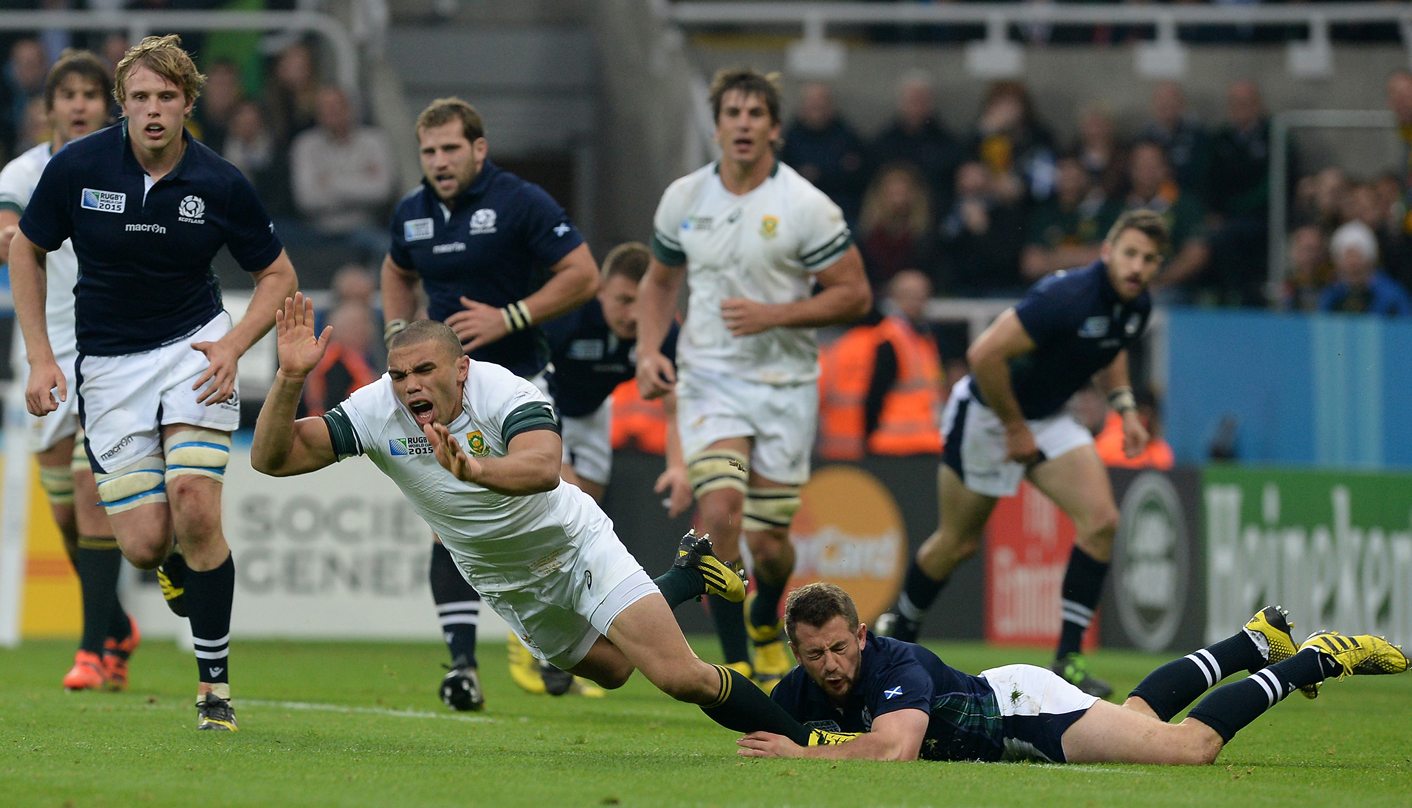 From England getting knocked out to another Heyneke Meyerism, it was a great weekend in the Rugby World Cup, possibly one of the most important to date. ANTOINETTE MULLER picks five talking points from the weekend gone by.

It was an important and intriguing weekend in the Rugby World Cup. From South Africa’s tetchy encounter against Scotland, which included a hilarious dive by a Scottish player which earned him a telling-off from referee Nigel Owens and England being booted out of their own World Cup. (Perhaps England should stick to hosting events rather than actually taking part in them.)

Quarterfinalists are emerging, but it’s hard to pick any single team as the favourite. The Aussies think Australia can do it and Ireland have shown some tenacity, but their match against Italy showed they are not as good as everyone thought they were. They are tussling it out with France for top spot and the second-placed team will most likely play New Zealand.

It’s been a big weekend and the business end of the tournament now looms, with a few more bits and pieces to take care of in the week ahead. Here are five of the big talking points from the weekend:

‘South Africa are not out of the woodwork just yet’

Of course the saying is: South Africa are not out of the woods just yet, but you have to love the Heyneke Meyerisms that find their way into conversation every so often. This was what he had to say after South Africa’s crucial win over Scotland.

Handre Pollard was key in the 34-16 win, kicking 19 points while Schalk Burger, JP Pietersen and Bryan Habana added the tries. One slight concern for South Africa was the fight-back from Scotland in the second half. Trailing 20-3 at half-time, Scotland crossed the whitewash twice after the break and, as has been the case since Sout Africa fought back against Samoa, there’s no time for the Boks to take in their win. They have a short turnover before facing the US later in the week.

The Boks are sitting pretty at the top of their pool with 11 points, but Scotland, on 10, and Japan, on eight, are close behind them. South Africa are expected to beat the US, but they were expected to beat Japan, too and the short turnaround might make things slightly tricky for Meyer’s Boks.

Ag shame. England were knocked out of their own World Cup on Saturday night after a 13-33 defeat by Australia. England, for the most part, were nowhere for most of the match. England had already lost to Wales in a match where they squandered their advantage, but the loss against Australia was different. England were woeful and spent most of their time kicking the ball around haphazardly. Despite English sport being in somewhat of a recession – their national teams having been booted out of the group stages in the football and cricket world cups in recent months – it’s hard to feel sympathy for one simple reason: England’s refusal to pick their ‘overseas’ players has been a big sticking point.

When the England squad was announced, European player of the year Nick Abendanon and his predecessor Steffon Armitage were not included. No, this is not a cheap attempt to joke that a Saffa could have saved England, it’s simply to say that if you are stupid enough to ignore your best players, then you deserve no sympathy. England’s refusal to pick players who do not play their rugby locally is foolish. It’s not even as if these guys play in faraway lands, they ply their trade in France – just a few minutes away on the train. If they have to make it for training, it’s not exactly going to be a great trek to get there. It might not be all Stuart Lancaster’s fault – who knows what kind of influence from the status quo led him to make these decisions – but if you want to cut off your nose to spite your face, well, it’s difficult to find any sympathy. Good luck next time, guys.

Who would South Africa prefer to play in the next round?

Providing there are no massive disasters against the US in the midweek match, South Africa should make the knockout stage of the competition.

Typically, since Australia’s qualification for the quarterfinals, many (mostly Australians) are tipping them to go on and win the damn thing. South Africa have already lost to both Wales and Australia in the last year, but then again: England beat Australia last year and look how that turned out.

Japan are stunning once more

Japan have become the darlings of this World Cup, cementing their stature with a win over an ill-disciplined Samoa. Many would have expected Samoa to walk all over Japan, but Eddie Jones’s men once again showed that you do not always need to be boss in the physical exchanges if you have skill. He also showed that you do not need to be huge to win the physical exchanges. Japan’s tackling has been quite extraordinary in this tournament and their scrumming against Samoa was impressive, too. Save for a disappointing loss against Scotland, Japan have been one of the most entertaining teams at the tournament.

New Zealand are looking rather tetchy

The 43-10 score line against Georgia flattered New Zealand somewhat. Here’s the thing, 19 handling errors and 14 turnovers from the All Blacks doesn’t exactly scream ‘world champion material’. They became the first team to qualify for the quarterfinals, but lacked the mesmerising swagger we’ve come to expect from the tournament favourites. Sure, the All Blacks are unbeaten, but in all of their matches thus far, they have shown that they are beatable. Their scrum struggled, Dan Carter was wayward and the handling was dodgy and they know it. Richie McCaw said after the win on the weekend that perhaps the All Blacks are “trying too hard”. There is, of course, the theory of peaking too soon and perhaps that is exactly what New Zealand are trying to avoid. DM