Unite Against Corruption marches: An introductory affair, courtesy of Nedlac 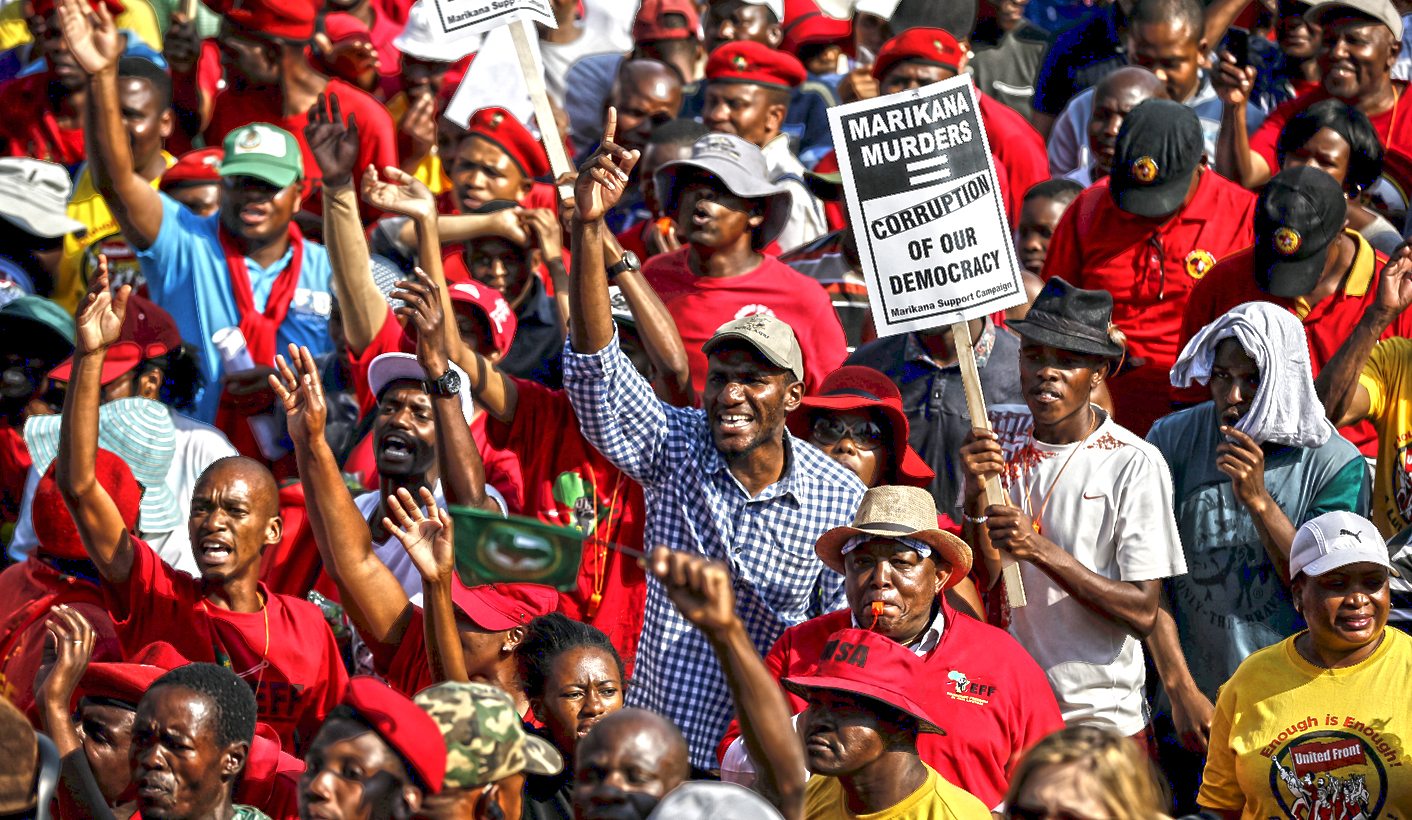 The National Economic Development and Labour Council's decision that workers who attended Wednesday's anti-corruption marches would not be protected had a clear impact on the numbers in Pretoria and Cape Town. There were still respectable turnouts, but the movement's success will now be judged by what happens on 14 October, when the marches are repeated. BHEKI C SIMELANE, REBECCA DAVIS & GREG NICOLSON report from Parliament and the Union Buildings.

At 10am in Pretoria’s Burgers Park, about 100 protesters stood in the shade and the “biggest march in the democratic era” appeared to have been oversold. From the beginning, the Pretoria march was a languid affair, the lawns and jacarandas of Burgers Park more suited to a picnic than the launch of the largest coalition of civil society groups since 1994.

The Bikers Against E-Tolls lingered by the portaloos. The handful from the Poor People’s Movement were popular with photographers because they were white and poor. The Economic Freedom Fighters (EFF) marched in the street. The National Union of Metalworkers of South Africa (Numsa) marched in the gardens and a group called The Long March to Freedom From Corruption took selfies. Slowly, the buses arrived and two hours later, with the temperature pushing 30 degrees, an estimated group of 4,000 set out for the Union Buildings.

In Cape Town, the morning of the march dawned with the weather looking decidedly grey – and worsening as the day progressed. With the march scheduled for 11am, by 11.30am drizzle had already started falling on the heads of several hundred protestors gathered at Cape Town’s traditional march starting point, Keizersgracht.

“We know that it’s raining and we know that you want to leave,” an organiser said, appealing for patience from the crowd. But the marchers proved hardier than anticipated: by the time they reached Parliament, their numbers had swelled to an estimated 2,000.

“We have no particular targets for this march today but are targeting corruption across the board,” said United Democratic Movement leader Bantu Holomisa, hand-in-hand with EFF leader Julius Malema and Anglican Bishop Jo Seoka at the front of the Pretoria march. “We are also targeting those that fail to report corruption wherever it exists. We are creating an awareness that will address the inferior quality of service delivery because money that should be be used to improve service delivery is divided between certain people. This march is also a demonstration of the power that the people wield.”

Around 250 groups supported the march, and in Pretoria different religious leaders were on the front line. The Congress of the People, the Inkatha Freedom Party, the EFF and Numsa led the chants. Groups as diverse as Solidarity and the Workers and Socialist Party filled the gaps, with many civil society workers present.

“We are saying that corruption impacts negatively on our poor, financial commitments by the government impact on our poor,” said Shawn van der Merwe, interim president of the Poor People’s Movement. Lungile Mpetsheni, general secretary of the Uniting Presbyterian Church in Southern Africa, said: “We are saying its enough.”

In Cape Town, protesters encompassed a wide range of social groups and concerns: from white people carrying placards calling for the Karoo not to be fracked, to Langa residents with a banner criticising the non-transparency of the housing database. There was a sizeable contingent of students and school pupils, as well as representatives from nongovernmental organisations such as Right2Know and Equal Education – which put out a statement in advance emphasising that it was marching against private sector corruption as well as corruption in the public sector. Despite the National Economic Development and Labour Council (Nedlac) prohibition, union members were also present.

Arriving on the dusty Union Buildings ‘lawns’, most of the 4,000 Pretoria protesters went straight to the shade while the speeches began on a stage they couldn’t see. Congress of South African Trade Unions general secretary Zwelinzima Vavi, Malema and Section27 executive director Mark Heywood were among those who addressed the crowd. “I stand here in the name of God to say may they not sleep well,” said Bishop Ziphozihle Siwa, president of the South African Council of Churches. Heywood said the marches would continue until the demands were addressed. Malema said the most corrupt individual of all was President Jacob Zuma.

Minister in the Presidency Jeff Radebe, who came to accept the memorandum, was unpopular with the mostly EFF supporters around the stage and the crowd tried to drown out his attempt to explain government efforts to combat corruption.

Outside Parliament, speakers addressed the marchers from atop a truck, among them former government minister Ronnie Kasrils. Makgoba called on the country to be “morally disinfected” to recapture its promise. “We need to stop marching against corruption,” Makgoba told the crowd. “How long are we going to allow our morally corrupt political and business leaders to intimidate us into silence?”

A list of demands was read as the rain worsened. With nobody available from Parliament to receive the memorandum, and the rain intensifying, the march ended damply – but with a promise that protesters would return in even greater numbers soon.

In Pretoria, there were only two people seen in Democratic Alliance colours, but no one was wearing African National Congress (ANC) regalia. ANC spokesperson Zizi Kodwa, who was in the Union Buildings garden during the speeches, later welcomed the initiative. “We are hopeful that these organisations will continue working with our government to subdue the scourge of corruption wherever it manifests itself. We add our voice that society must not tolerate corruption and must continue with this initiative by exposing it wherever it rears its ugly head,” he said.

Looking at the numbers, 4,000 protesters in Pretoria and 2,000 in Cape Town is a respectable turnout, but it falls far short of the 100,000 mentioned before Wednesday. Numsa’s failure to secure a strike notice from Nedlac had a clear impact. The marches will be repeated on 14 October when workers will be protected to hit the streets against corruption. That will provide the clearest indication of how much support the movement has and whether the momentum can continue. DM

Photo: Demonstrators carry placards as they march to the Union building to protest against corruption in Pretoria, September 30, 2015. REUTERS/Siphiwe Sibeko