The ANC, Chancellor House and Hitachi: A shadowy nexus without a smoking gun 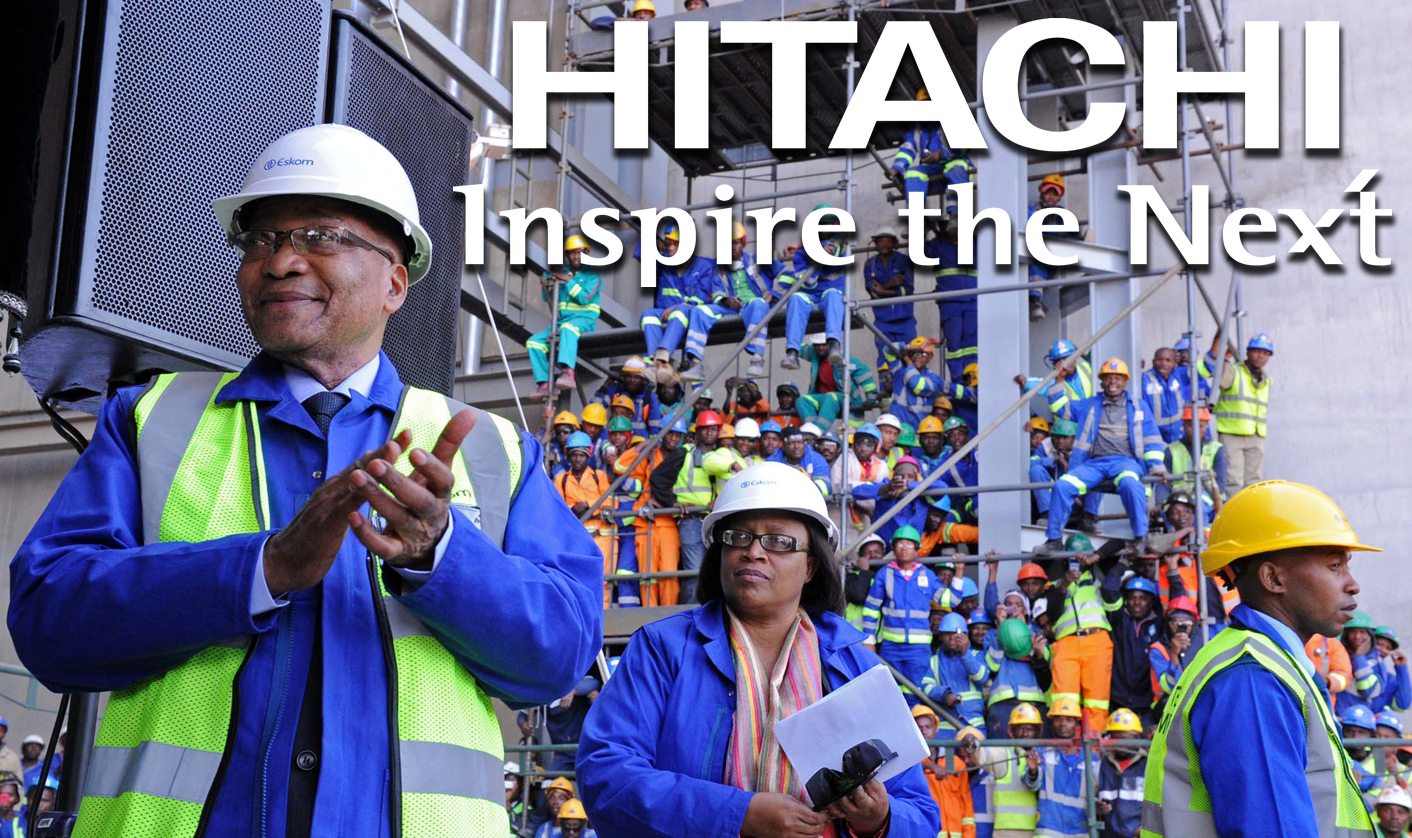 A statement from ANC treasurer general Zweli Mkhize on the stunning news that Hitachi, Ltd. had paid $19 million to settle charges by the US Securities and Exchange Commission in relation to its Eskom contracts, distanced the party from anything to do with the matter. “The organisation was not involved”. What the statement does not say is whether the ANC derived benefits from the deal and from “success fees” paid to Chancellor House. While the entire arrangement smells fishy, this is the crux of the matter. It will be difficult to secure answers or any real investigation as every institution that can investigate it is ultimately controlled by the ANC. So yet another set of damning allegations will be sucked into the black hole where political accountability lives in South Africa. By RANJENI MUNUSAMY.

There are two key sentences in the statement from US Securities and Exchange Commission (SEC) on the charges against Hitachi, Ltd. for violation of the Foreign Corrupt Practices Act. The first is the arrangement between Hitachi and Chancellor House “gave the front company (Chancellor House) and the ANC the ability to share in the profits from any power station contracts that Hitachi secured”. The second is this: “Through a separate, undisclosed arrangement, Hitachi paid the front company an additional $1 million in “success fees” that were inaccurately booked as consulting fees without appropriate documentation.”

With a 25% stake in the Hitachi’s South African subsidiary, Chancellor House, a company set up to raise funds for the ANC, is entitled to a share of the profits. According to the SEC, Chancellor House was paid $5 million in “dividends” for two contracts for Eskom power stations. From the time the Mail & Guardian reported in 2007 that a consortium led by Hitachi, including Chancellor House, had won a contract to supply steam generators for a new power station, alarm bells started ringing about the conflict of interest and possible corruption because the ANC could influence the awarding of the contract and then benefit from it.

The only conflict of interest that could be pinned down, however, was against former Eskom chairperson and ex-ANC national executive committee member Valli Moosa. Former Public Protector Lawrence Mushwana investigated the matter following a complaint from former Democratic Alliance (DA) leader Helen Zille and stated in his report in February 2009:

“There was a conflict between the personal interest of the former Chairperson of the Eskom Board of Directors, Mr V Moosa, in the African National Congress and his duty towards Eskom at the time when the Board resolved to award the Medupi Boiler Contract to the Hitachi Consortium, in which the ANC has an interest.”

But Mushwana went on to say: “The contract that was awarded to the Hitachi Consortium was not in any way affected by Mr Moosa’s improper conduct” and “The awarding of the contract by Eskom to an entity in which the ruling political party has an interest was not unlawful”.

Speaking to Stephen Grootes on 702 on Tuesday, Moosa said there was no way Chancellor House and the ANC could have influenced Eskom’s decision to award the contract to Hitachi. He said he brought in an outside auditing firm to make sure that these contracts were above board.

Without any evidence of anything untoward – an instruction, a wink or a nod – it is difficult to know for sure what happened. But anyone familiar with the world of politically connected networks would know that there need not have been any of that. It is simply the awareness of a politically favoured entity that can sway decisions. Cadre deployment ensures that the right people are in the right places to enable and ensure that those decisions are made.

The second key sentence in the SEC statement contains the rub.

“Through a separate, undisclosed arrangement, Hitachi paid the front company an additional $1 million in “success fees” that were inaccurately booked as consulting fees without appropriate documentation.”

If Hitachi had a superior bid for the contract, why did it have to pay a shareholding company “success fees”? And then misrepresent it as “consulting fees”? Because Hitachi has now paid $19 million to settle the SEC charges, it closes the investigation without having to explain why the “success fees” were paid and how the “success” was secured.

Moosa claims he has no knowledge of this. “If it is true that the Japanese bearing company of Hitachi in South Africa attempted to pay a bribe, I would be very disappointed, notwithstanding the fact that the Chancellor House was in no position to influence Eskom’s decision at the time, even if it wanted to,” he told 702.

ANC treasurer general Zweli Mkhize said in a statement that this was an internal matter between Hitachi and Chancellor House. “Whilst we have noted that Hitachi Ltd has neither denied nor admitted the allegations brought against it, the ANC categorically states that the organisation was not involved, implicated nor approached to answer on anything relating to the charges brought against Hitachi.

“The ANC was further not involved in the transaction between Hitachi and Chancellor House nor do we have any information on any impropriety relating to the award of the Medupi or Kusile contracts to Hitachi,” Mkhize said.

But the question to be asked is whether money came into the ANC’s bank account from Chancellor House from the fees it was paid from Hitachi. Because there is no transparency in political party funding, the ANC is not obliged to answer. And until there is evidence of this payment, there is no smoking gun.

So how can the matter be investigated in order to get answers?

Early on Tuesday morning, the DA leader Mmusi Maimane announced he would be laying charges against Chancellor House for the $6 million bribe it received. Maimane said the SEC statement showed “prima facie evidence of corruption which saw the ANC illegitimately profit to the tune of $6 million via improper payments disguised as ‘consulting fees’ and other legitimate payments”.

While this might be so, what evidence would the police officer at the station where Maimane lays the charge go in search of? The bigger question is who in the South African Police Service or National Prosecuting Authority (NPA) will pursue this investigation, considering it has to do with funds allegedly paid to the ANC’s front company? Who would be brave enough to subpoena the ANC’s and Chancellor House’s financial records? The Hawks under the newly appointed Berning Ntlemeza? Or the NPA under the new National Director of Public Prosecutions Shaun Abrahams?

Charges previously laid by opposition politicians on the arms deal, Nkandla and Marikana have gone nowhere and this matter is likely to follow suit. “The DA will ensure that those implicated at Chancellor House are investigated, prosecuted and if found guilty, jailed,” Maimane said.

Good luck with that.

Maimane said he would also be writing to Public Protector Thuli Madonsela to request that her office institute an investigation into the matter. But as the Public Protector only has jurisdiction over government and state entities, her investigation could only look into a part of the matter relating to Eskom. Madonsela has no powers or jurisdiction to investigate Chancellor House or the ANC.

Then there’s Parliament. Questions could be asked about the Hitachi/Chancellor House transactions. And, as is so often the case, they could be fudged or go unanswered. Parliament exercises oversight over government and state owned companies so, like the Public Protector, only the Eskom contracts can be probed. And with the precedent set in the Nkandla matter, ANC MPs can make sure the issue is contained and shut down.

It looks likely that this scandal will fade and become part of the vortex of unanswered questions and lack of political accountability in our country. Unless a smoking gun appears, there appears to be no way to pursue the matter further. Unless there is credibility in the police and NPA, political cases will go nowhere. And unless there is transparency in political party funding, the potential for corruption and illicit dealings is great.

Without all these, South Africa has to contend with the stench that something fishy happened. Even worse, we will have to learn to live with it. DM