‘Hand them over so we can stone them to death’: LGBTI people’s ongoing African battle 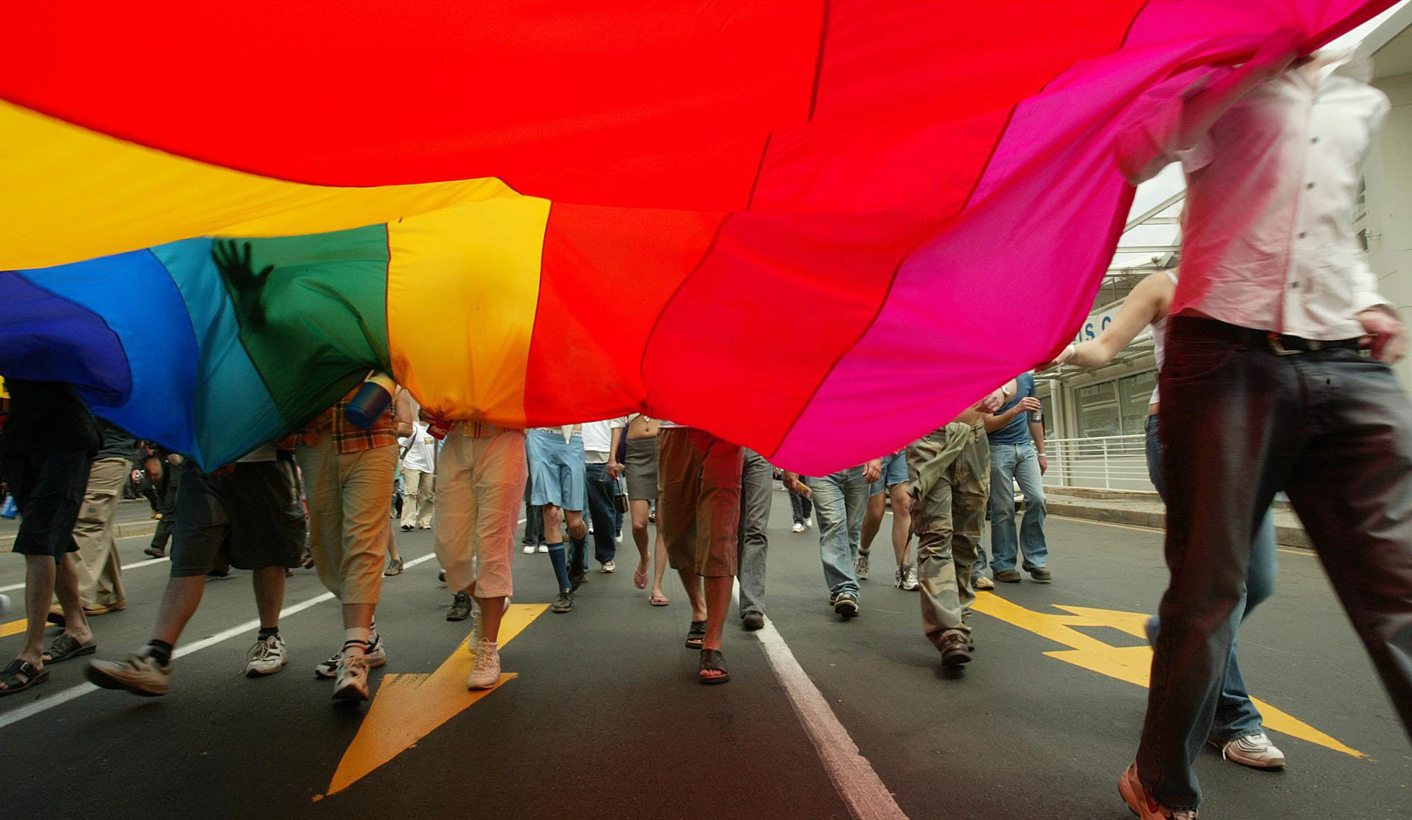 Thousands of gay and lesbian South African's take to the streets of Johannesburg Marelise-vd-Merwe-LGBTI-rights.jpg

It’s a song that has been sung year after year: Lesbian, gay, bisexual and transgender (LGBT) people are victimised in the majority of African countries, and human rights activists continue to fight an uphill battle. Earlier this week, Human Rights Watch released two disturbing reports from Kenya and Tunisia respectively, detailing more draconian prison sentences, public violence and even torture. There is no law protecting the rights of LGBTI persons and those who are brutalised or otherwise discriminated against have little recourse. By MARELISE VAN DER MERWE.

“We are saying hand the homosexuals over to us so that we can give them up, we can stone them to death. We can teach them to become normal, straight people,” one citizen calmly requests in a recent Human Rights Watch (HRW) video detailing some of the mob attacks that have occurred in Kenya’s coastal region in recent years.

In Kwale County, where homophobia is rife, those who suffer mob attacks, violence and victimisation cannot afford to report their experiences to the police. “Lesbian, gay, bisexual and transgender people are not safe on the Kenyan Coast,” says Lorna Dias, executive coordinator of the Gay and Lesbian Coalition of Kenya. Those who assist people who suffer victimisation are not safe either: according to The Issue is Violence: Attacks on LGBT People on Kenya’s Coast, mobs attack clinics, healthcare workers, activists or anyone else providing assistance, as well as go door to door looking for suspected homosexuals. The abovementioned report was issued this week by HRW and Persons Marginalised and Aggrieved (PEMA) Kenya, a community organisation in Mombasa that provides support to gender and sexual minorities.

Suspected homosexual activity is not taken lightly. “On February 18, 2015, police arrested two men in Kenya’s coastal Kwale County and charged them with ‘unnatural offences’ and trafficking in ‘obscene material’”, the report reads. Community members had pressured police to carry out the arrests.

The situation in Tunisia is not much different. On 22 September, a 22-year-old Tunisian man accused of engaging in homosexual acts was sentenced to a year in prison although, HRW points out, his treatment was in violation of both Tunisia’s constitution and international law.

Taking a snapshot of LBGT rights in Africa is a sobering exercise. Amnesty International paints a succinct picture of the recent progress here; in short, there are more than 30 African countries in which homosexuality is criminalised. Mauritania, Sudan, Nigeria, Uganda, Tanzania and Sierra Leone have the toughest histories of homophobic laws and draconian punishments towards LBGT people and supporters alike, some include the death penalty (Uganda recently revisited its proposed death penalty for certain homosexual activities and replaced it with a life sentence). Kenyan law provides for a sentence of up to 14 years in prison for so-called ‘carnal knowledge against the order of nature’. And HRW researcher Neela Ghoshal adds: “A number of countries in Africa, including Egypt, Tunisia, Morocco, Senegal, Cameroon, Kenya and Gambia continue to enforce deeply discriminatory laws that criminalise consensual sex between adults.” (For those wanting a more complete picture, Wikipedia gives a useful overview of the various African countries’ standpoints here while the BBC provides an international snapshot here.)

HRW’s report on the coast of Kenya illustrates clearly that LGBTI people are not just in danger of facing harsh sentences. Mob justice is also common. One victim, for example, described how he was slashed from the neck down by a group of men. He was one of those attacked with broken bottles.

The key challenge is that victims frequently fear that reporting incidents of victimisation will simply lead to their arrest or other forms of discrimination. “In principle, LGBT people who are victims of violence ought to be able to turn to the police, like all other Kenyans,” Ghoshal told Daily Maverick. “The reality is that a number of LGBT victims of crime have been subjected to degrading, humiliating treatment when they have tried to report crimes. One gay man who was the victim of gang rape was faced with a police officer who called him a ‘common showgirl who deserved what he got’ and refused to take his statement.

“There are some cases in which police have protected LGBT people in the immediate moment that they are being subjected to violence, but in none of these cases have the police taken action against the perpetrators, which allows homophobic and transphobic violence to continue with impunity.”

In the case of the abovementioned 22-year-old Tunisian who was sentenced to a year in prison, there are similar complications. Police in Hammam Sousse, south of Tunis, arrested the man, whose name is being withheld for his protection, on 6 September. His lawyer, Fadoua Braham, said police summoned him for questioning as a witness after they found his telephone number on the phone of a man murdered a week earlier. According to his lawyer, he was summoned for questioning and asked about his homosexuality.

According to Braham, he confessed to committing sodomy because, he claims, police threatened him to bring a murder charge against him unless he did.

“Such examinations are grossly intrusive, invasive, and abusive, violating the individual’s rights to integrity, dignity, and privacy. They constitute cruel, inhuman, and degrading treatment that may amount to torture, violating the African Charter on Human and Peoples’ Rights, the Convention Against Torture, and the International Covenant on Civil and Political Rights, all of which Tunisia has ratified,” HRW said in its statement. “Forced forensic anal examinations are also contrary to medical ethics, according to the World Medical Association and the UN Principles of Medical Ethics Relevant to the Role of Health Personnel, Particularly Physicians, in the Protection of Prisoners and Detainees Against Torture and Other Cruel, Inhuman, or Degrading Treatment or Punishment.”

HRW Tunisia office director Amna Guellali told Daily Maverick that underreporting of abuse by authorities was a major challenge for activists. “There is no formal recourse for LGBT people if they have been victimised. If they have been victim of violence from other individuals or from mobs because of their sexual orientation, they can formally file a complaint at the police office. But most of the time they don’t do it because they are afraid to be repressed even more by the police and to face prosecution. So usually the abuses against LGBT community are underreported,” she said.

“There are several cases of prosecutions for the LGBT community, especially gay men, who can find themselves in the crosshairs of the police … and there are no specific programmes in place (to address the problem) as far as I know.”

A further problem is that discrimination is impacting on the assistance that can be given to LBGT people by activists, not only because those supportive of LBGT people are victimised too, but also because LBGT people are afraid to seek help from organisations other than state bodies. “For many LGBT people in the coast region, safety is a daily concern,” says Esther Adhiambo, executive director of PEMA Kenya. And mob attacks have placed those organisations creating safe spaces for LBGT people in danger too.

Unchecked violence on the basis of sexual orientation and gender identity not only constitutes a serious human rights abuse, it also jeopardises Kenya’s efforts to address an HIV epidemic that is highly concentrated among vulnerable populations, including transgender women and men who have sex with men, HRW said in its statement. “In three of the mob attacks, violence or threats from residents and local religious leaders caused health providers serving MSM (men who have sex with men) to temporarily or permanently close their doors or shut down workshops. Anti-gay attacks in Kwale in February led dozens to flee the region or stay in their houses for weeks, leading to a notable decline in participation in HIV-prevention activities at a Mombasa-based health centre.” UNAIDS, it said, has called for decriminalising same-sex conduct, on the basis that criminalisation drives vulnerable groups underground and away from essential HIV-prevention and treatment services.

PEMA and HRW identified ways in which the authorities could improve their responses to human rights abuses, but whether this will be heeded remains to be seen, given that Kenyan President Uhuru Kenyatta recently described LGBTI rights as a “non-issue”.

However, there has been some progress in civil society, said Guellali, which was good news, and hopefully a starting point for an attitude change in state bodies. “Concerning civil society and raising awareness about LGBT rights, there is some progress lately. The government gave legalisation to an association, Shams, the first association openly campaigning for the decriminalisation of LGBT and for the protection of their rights,” Guellali said.

Meanwhile, civil society organisations on Kenya’s coast, including PEMA Kenya, have undertaken initiatives to train police officers, healthcare providers, and religious leaders on sexual orientation and gender identity issues, and on the importance of non-discrimination in providing services. And, points out Ghoshal, the African Commission on Human and Peoples’ Rights passed its ground-breaking resolution 275 in 2014, calling on governments to prevent and punish all forms of violence targeting people on the basis of their real or imputed sexual orientation or gender identity. “African governments need to do more to uphold this resolution and to protect rather than persecute LGBT people,” Ghoshal said. DM