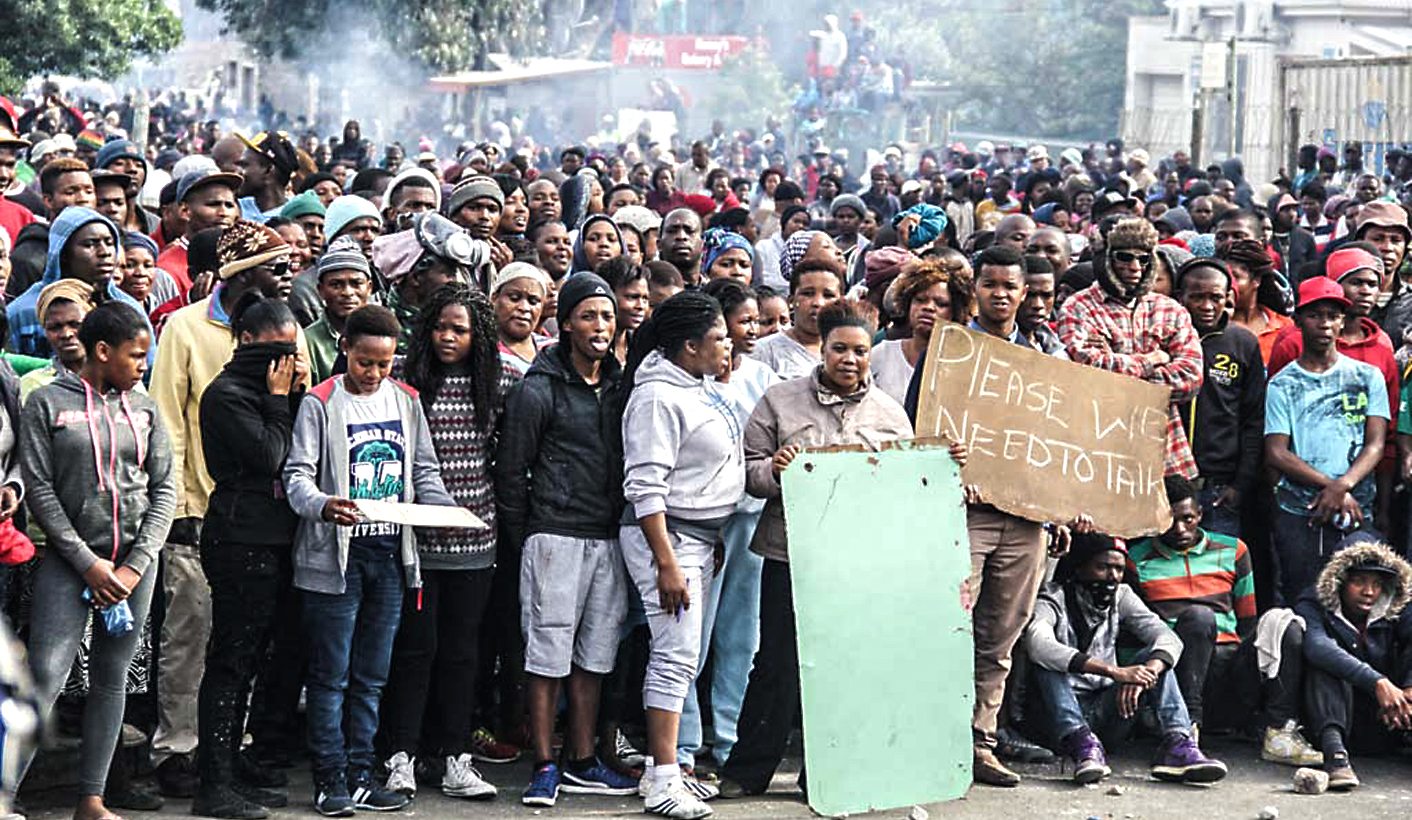 Violence erupted in Masiphumelele outside Cape on Tuesday, with police using teargas and rubber bullets to disperse a crowd of more than 1,000 residents who had blockaded the road to Kommetjie. The protest occurred because many Masiphumelele residents believe seven people arrested for public violence last week are innocent. By BERNARD CHIGUVARE, MASIXOLE FENI and GROUNDUP STAFF for GROUNDUP.

All photos by Masixole Feni. First published by GroundUp.

A temporary respite from violence in Masiphumelele ended on Tuesday September 29, as police and more than 1,000 residents clashed. Residents blocked the road to Kommetjie with burning tyres. Police used teargas, rubber bullets and arrests to disperse the protest.

Masiphumelele is a township of about 20,000 people situated in the south of Cape Town. It is a predominantly black township, situated close to the mostly coloured low-income township of Ocean View, and the mostly white upper-middle-class suburb of Kommetjie. Masiphumelele’s residents have, for months, been demanding more police officers in the township. Ocean View’s police station serves all three neighbourhoods. A new commander, Captain Angie Latchman, was appointed to the police station in September. She told GroundUp on 17 September that seven new constables were set to join the station this month. Despite several telephone calls to the police, GroundUp has not been able to confirm yet whether the new constables have indeed started working in the area.

Masiphumelele flared up two weeks ago when a boy was murdered and a woman was raped on the same day. Some residents responded by surrounding and killing one of the alleged perpetrators. A state vehicle was also apparently burnt. Since then there have been protests and much tension in the community.

Tuesday’s protest occurred because many Masiphumelele residents believe that seven people arrested on 20 September for public violence last week are innocent. A resident told GroundUp there is a view that the police target innocent people on their way home from shebeens, such as the seven who were arrested. The seven were refused bail by the Simon’s Town Magistrate Court on 23 September. They appeared in court again on Tuesday and were released by the afternoon on R500 bail each. Hundreds of residents wanted to go to the court hearing on Tuesday but they were under the impression that the South African Police Service (SAPS) would allow only 30 people to attend. This is what apparently led to the outbreak of Tuesday’s violence.

According to a resident, police fired rubber bullets and teargas at about 7.30am. Protesters retaliated by throwing stones at the police. The resident said the SAPS gave marchers 10 minutes to disperse but the protesters responded by insisting that everyone should be allowed to attend the Simon’s Town court hearing. There were about 50 police officers at the scene. The protest started off with about 100 people in the early morning but swelled to over 1,000 during the course of the day.

A similar version of events was provided Captain FC Van Wyk of the SAPS Western Cape Media Centre. He said that at about 5.30am 100 community members from Masiphumelele staged a protest, blocking Kommetjie road by erecting barricades, burning tyres and making it difficult for anyone to enter or exit the area. He confirmed that the crowd grew to over 1,000. He said 27 people were arrested for public violence, but no injuries were reported.

GroundUp photographer Masixole Feni was on the scene and observed that the police appeared to be targeting women when they arrested people. His photographs support this view.

It appeared that peace might have been restored to the township on Tuesday after a meeting was held between City of Cape Town officials and the residents of Masiphumelele at the township’s community hall. Pastor Nomzamo Mqhathane, who attended the meeting, told GroundUp: “The situation is on and off. I cannot say it is 100% calm.” But it became clear that calm has not been restored. Mqhathane said, “There have been a lot of meetings going on within the community and some state officials have come to listen to our concerns.” But she also said the community has yet to see something tangible that will curb criminal activities. Mqhathane believes police should work towards weeding out drug lords in the area.

According to Brigadier Aaron Mlenga at the community meeting, police are making an effort to bring back stability to the area. In response to a question that implied there was a cosy relationship between the cops and criminals, the brigadier noted the appointment of the new Ocean View station commander, suggesting that this might turn around the township’s crime situation.

It is a hope echoed by Felicity Purchase, Masiphumelele’s ward councillor. She said: “There have been complaints about police response times for the past years but now that there is a new station commander at Ocean View we hope there is going to be a change, though it will take a while.” Purchase confirmed that several meetings have taken place between the community, church leaders and the police. She says police officials from all over Cape Town are patrolling the area day and night, and this has improved the situation.

Accusations of drug dealing by some Masiphumelele residents have been directed at foreign nationals, Nigerians in particular, leading to concerns for their safety. But Mohammed Awal, from Nigeria is sceptical. He sells burglar bars, and says he did not stop working during the unrest in the past few weeks. “I am called now and again by different people to work in their areas but I come back here. Some people are accusing Nigerians of selling drugs but community (members) have searched my place and some of my fellow Nigerians, and they could not find any drugs,” he said.

Awal said some Nigerians operating in Masiphumelele have closed the containers they use for business purposes and left. Finding out their concerns though is challenging. “The problem is we come from different regions of Nigeria and we speak different languages so it is difficult to hold meetings as people from one country.” DM

Photos: Police and protesters confront each other in Masiphumelele earlier on Tuesday. Photo by Masixole Feni.