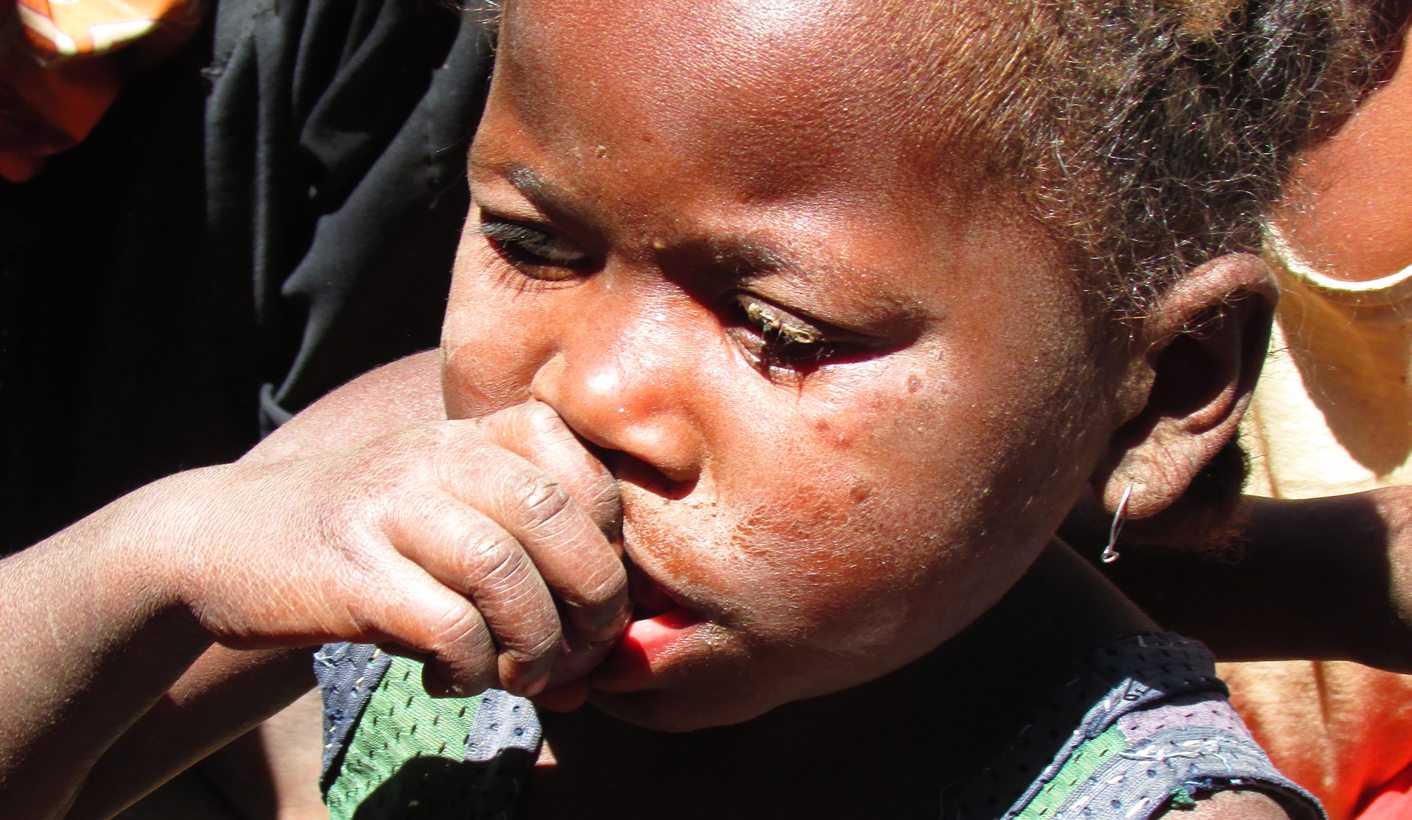 On the surface, this is a story about food, and Madagascar. But it’s actually about something else entirely. It’s about how generations of Malagasy children have been systematically denied their full mental potential by poor nutrition and worse governance, and how the next generation is suffering the same fate. Even worse: the problem is not confined to Madagascar. By SIMON ALLISON.

ANTANANARIVO – There are two food crises in Madagascar. The first is very obvious and distressing, but it can be fixed. The second is almost invisible – but has already had devastating, long-lasting consequences on the mental development of successive generations of Malagasy children. And the implications of what’s happening in Madagascar go far beyond the island itself, and cut to the core of inequality in the modern world.

Little is going right for Madagascar at the moment. Although last year’s election of President Hery Rajaonarimampianina appeared to resolve the political crisis which began in 2009, this relative stability has yet to manifest itself in the form of better governance or an improved economy. Symptoms of the malaise are not hard to find, from the parlous state of the government’s coffers (it is effectively broke, so much so that even the president must find donors to fund his domestic travel) to the dysfunction of state-run Air Madagascar (or ‘Air Maybe’, as local development workers describe it), which routinely delays flights for days or even weeks, stranding tourists, businessmen and government officials alike.

Yet nowhere is the collapse of the state more evident than in the collapse of its health system. Never particularly effective, it has only gotten worse since 2009. Most health workers have not been paid in the last few years, and facilities have not been maintained. Even worse, most donors abandoned the country when sanctions were imposed by in 2009, and have yet to return. The provision of foreign funds and supplies has slowed to a trickle, one entirely disproportionate with the scale of the problem.

This has left Madagascar woefully unprepared to deal with a major drought in several southern regions. Droughts in this part of the country are cyclical and not unexpected, but there are no safeguards in place to deal with them. In the absence of rain, southern Madagascar is experiencing severe acute malnutrition that is affecting hundreds of thousands of people, with children suffering most.

Severe acute malnutrition, or wasting, is what most people think of when they think of starvation. This is what those skeletal babies with distended stomachs are suffering from; it is images of this that BandAid made synonymous with Ethiopia. In Madagascar, the problem is severe but not untreatable, and interventions from international organisations such as the United Nations Children’s Fund (Unicef) – who are training community health workers and providing life-saving supplies – are making a visible difference in affected communities.

Severe acute malnutrition is about not having enough food, which means it can be addressed by providing food. This is the visible crisis: we can see the protruding ribs, and we can put meat on those bones again.

But severe acute malnutrition is not the only kind of starvation. The other is chronic malnutrition, or stunting, which is much harder to see, and less obviously urgent. Few die from it, in the short term at least. Its victims don’t require emergency food aid or hospitalisation, and its consequences only manifest in the long term, which means it’s rarely a priority for harried governments and overstretched aid organisations. But of the two, this is by far the most dangerous for the health of the nation.

“Acute malnutrition is a condition that results from insufficient food intake, and the major problem is the deficiency in energy, while chronic under-nutrition is the result of a deficiency in micronutrients, namely vitamins and minerals that are required not only for linear growth but also for the development of the brain. I would say that one is mostly an issue of quantity while the other one is an issue of quality,” said Simeon Nanama, Unicef’s chief of nutrition in Madagascar.

In other words, children who are chronically malnourished get enough food to survive, but they don’t get enough micronutrients to develop normally. This could be because the food they are getting is of poor quality, but other factors play a role. If a child has worms, then the worms will absorb the micronutrients. If a child is sick, then the body will use the micronutrients to fight the illness. “We know from evidence that chronic malnutrition is not only about food. If we look at the mapping of chronic malnutrition in Madagascar, and we compare it to the map of household food insecurity, we can see that there is no correlation,” said Nanama. In fact, the highest concentration of chronically malnourished children in Madagascar is in the relatively prosperous central highlands.

Photo: This photo illustrates the impact of stunting on growth. Both boys were born on 3 June 2011, but their heights are dramatically different. Sitraka, on the right, suffers from chronic malnutrition; Miranto, on the left, doesn’t. The photo was taken in on 24 September 2015 in Fokontany village in Amhobohimidasy, in the Antananarivo-Sud district. (Picture credit: UNICEF).

Without micronutrients, children don’t grow properly. This is not just a physical thing, although there is usually a marked height difference between healthy and chronically malnourished children of the same ages. It’s also a mental thing: the neural pathways in the brains of chronically malnourished children are less developed, and their brains are sometimes smaller than those of their peers.

Forty-seven percent of Malagasy children under five suffer from chronic malnutrition. This proportion, nearly one in two, has remained roughly intact since 1992, which is as far back as the statistics go. Taken to its logical conclusion, it means that a hefty percentage of the Malagasy population of all ages is operating on reduced brain capacity.

Or, as Androy regional governor Tatasoa Mosa put it in an interview, with a lot less delicacy: “Ils sont un peu dadas … ils sont imbeciles. (They are a little crazy. They are fools.)”

Mosa’s generalisation is pejorative, and vastly overstates the impact. However, research does support the link between chronic malnutrition in someone’s formative years and diminished prospects later in life – a link best explained by neural deterioration. In countries with a large chronically malnourished population, there is also a massive impact on economic performance.

The highest-profile long-term study was conducted in Guatemala. Between 1969 and 1977, researchers from the Institute of Nutrition of Central America and Panama chose two villages of similar size, and administered a nutritional supplement to the children of each. One supplement (atole) was very nutritious, while the other (fresco) was less so.

Between 2002-2004, researchers returned to find out what had become of the participants in the study. Their findings make for disturbing reading: in summary, men exposed to atole in their first two years of life enjoyed a 47% increase in average wages compared to those on fresco (there was no significant difference for the study’s female participants, likely because women are largely excluded from the employment market in Guatemala). Another report, based on the same data, found that the participants with better nutrition were more likely to stay in school, and performed better on reading comprehension.

In its Nutrition Overview, the World Bank best sums up the consequences of all this, for both the individual and the state: “Undernourished children are more likely to die in the first few years of life. And if they survive, they have lower educational and income attainment. For example, children who are deficient in iodine and essential micronutrients have on average 13 fewer IQ points than those who are iodine-sufficient. Similarly, stunted children are more likely start school later, perform more poorly on cognitive functioning tests, and are more likely to drop out of school.

“Studies show that adults who are stunted as children earn 20% less than comparable adults who were not stunted and are 30% more likely to live in poverty and less likely to work in skilled labour. Thus, the economic costs of undernutrition, in terms of lost national productivity and economic growth, are significant—ranging from 2% to 3% of GDP in some countries and up to 11% of GDP in Africa and Asia each year.

Chronic malnutrition is not just a Malagasy problem. All of the developing world suffers from it to some extent: in sub-Saharan Africa, for example, some 40% of children under five suffer from stunting, according to a 2013 Unicef estimate; in South Africa, a relatively prosperous African country, that figure stands at 23.9%. Even the developed world is not immune: in the US, it is 2.1% – a shocking indictment of poverty alleviation policies in what is supposed to be a first world country.

This is, without question, one of the great public health crises of our time. How long can we ignore the fact that poor nutrition is systematically degrading the mental capacity of millions of children around the world, and has been for generations? How can societies succeed when up to half of their populations have been denied their full mental potential?

At the same time, caution is required. In highlighting the issue, aid organisations and media risk labelling its victims. It’s not difficult to envisage careless politicians using this information to marginalise sections of the population (like governor Mosa and his “imbeciles”), or to see businessmen discriminating in favour of taller people (even though this is by no means an accurate indicator of stunting).

Chronic malnutrition may not be as visible as its more familiar cousin, severe acute malnutrition. Children suffering from stunting are not usually at immediate risk of death, and in photos they look normal, healthy and happy – a far cry from the heart-wrenching images we usually associate with famine and starvation. But its invisibility makes it even more insidious: unless we begin to take chronic malnutrition seriously, Madagascar will never reach its full potential – and neither will the developing world. DM

Photo: A child eating a red cactus fruit which has almost no calories or nutritional value. (Simon Allison)

Simon Allison’s research expenses for this story were covered by UNICEF.